In Charlotte’s trendy neighborhoods, a culture clash of black and white, rich and poor 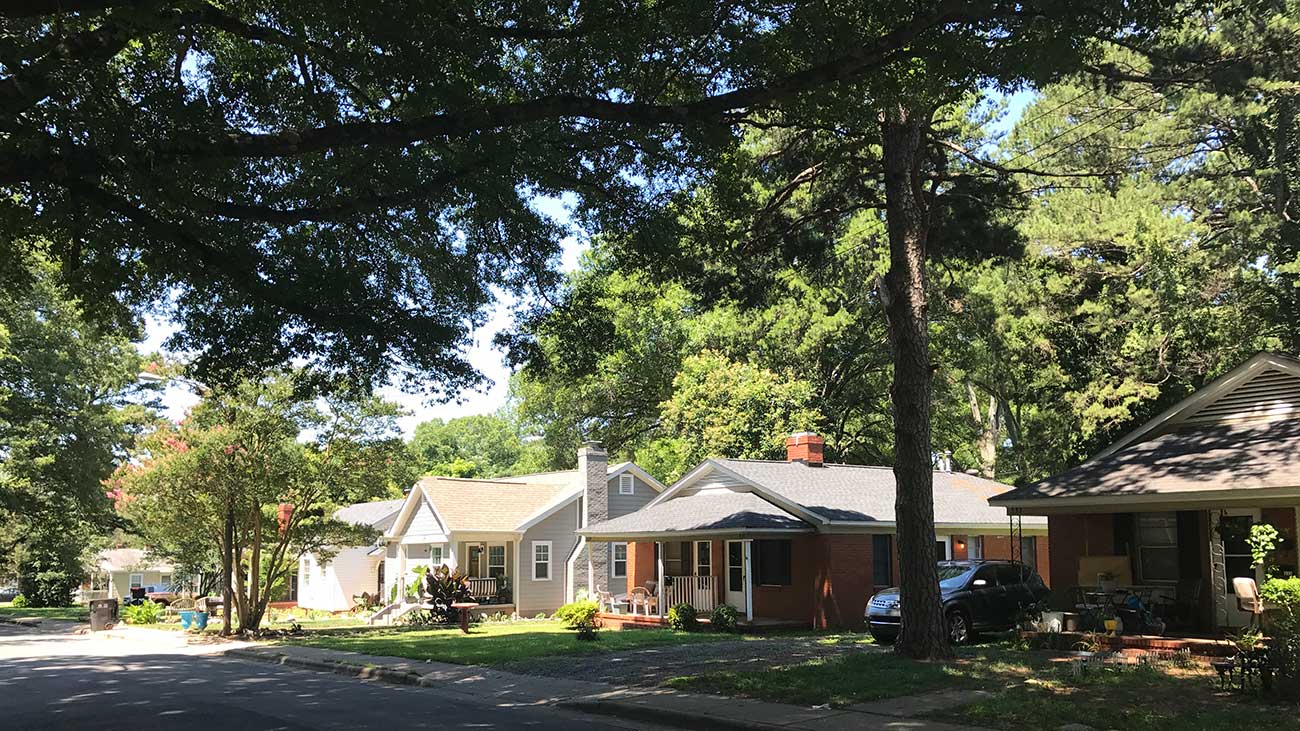 One day in May, a small group of teenagers were doing what kids sometimes do — walking aimlessly up and down the street, ringing doorbells and running away.

Until the teens approached one particular door. The man inside confronted them, yelling at the teenagers and warning them to stay away.

They scattered, running through a stand of trees one street over to tell their parents. And at least one woman went back over to yell at the man who had shouted at the kids.

The scene quickly devolved, and it ultimately took law enforcement to de-escalate the situation.

What turned this seemingly minor neighborhood incident into a scene requiring police response? A bubbling over of tensions involving race, class and culture.

The neighborhood was Grier Heights. The teenagers were black. The street they were walking on is made up of newly built houses, full of families making much more money than their neighbors — and predominately white. 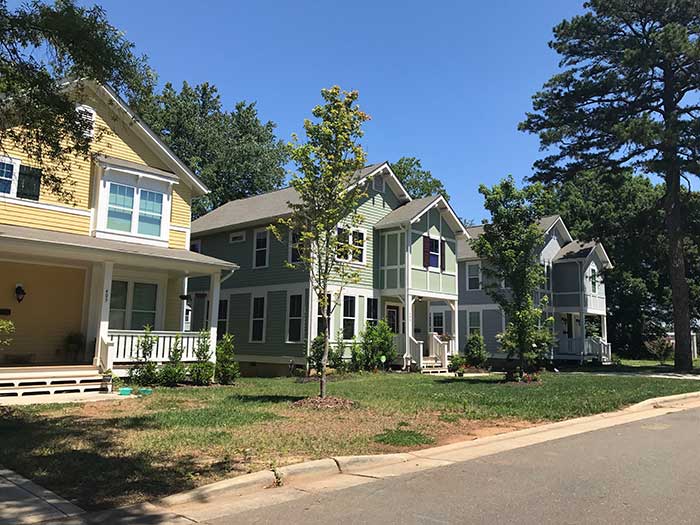 For most of the past century, Charlotte has existed as a segregated city. Affluent white families mostly live in the triangle of south Charlotte between roughly South Boulevard and Monroe Road — known locally as “the wedge.” Lower income, mostly minority families are concentrated in “the crescent” to the west, north and east.

[Agenda story: How Charlotte came to be a segregated city]

Those boundaries are beginning to break down. Nationally, there’s a renewed interest among young professionals in the urban core of cities and their surrounding neighborhoods. The same is holding true in Charlotte.

More affluent families are buying homes and rehabbing them or tearing them down to build bigger ones. Investors are flipping homes into high-priced rentals and developers are demolishing low-slung duplexes to build high-priced townhomes. 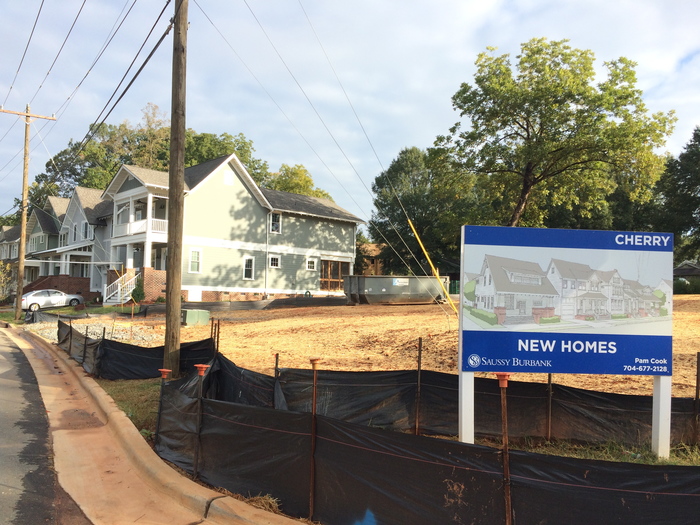 These shifts mean that for the first time in decades, black and white, rich and poor are living next to each other on a larger scale.

The process isn’t always smooth. Interviews with both predominately black long-time residents and white newcomers illustrate some of the bumps in the road.

The situations are nuanced, but to paint a broad brush: White families often come in with expectations — usually well-intentioned — of what a neighborhood should be and how an area should develop.

In turn, minority families who often have lived there for generations have described themselves as unwelcome in their own home. Sometimes they feel like they’re viewed as negative forces on property values instead of as human beings.

These culture clashes have left neighborhood groups struggling to find ways to bridge the divide. It’s difficult — but in some cases, like in the Belmont neighborhood just north and east of Uptown, there have been tangible steps made to bring the two sides together. 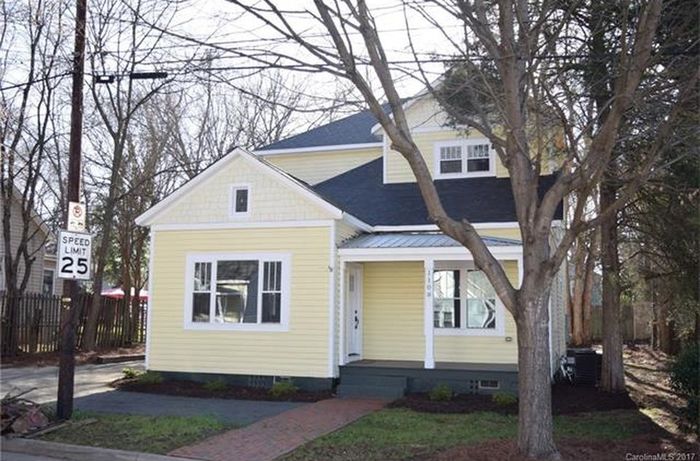 A home in the Belmont neighborhood

‘They look at us like we don’t belong here’

These macrotrends playing out across Charlotte can feel intensely personal to the people living them. In these neighborhoods, “gentrification” is not an abstract term. The changes play out in everyday life.

One African-American woman who lives off Tuckaseegee Road in west Charlotte said her part of town used to be a place where people rolled up their windows and drove through as fast as possible. One day, she saw a white woman running down the street and her first thought was to wonder what she was running from. Turns out, she was just jogging.

But the differences can manifest in more painful ways as well. In Grier Heights, long-time residents watched as new residents moved in who didn’t look like them. In some cases, Grier Heights natives tried to get mortgages for the new homes but didn’t qualify.

The frustration bubbled over at a neighborhood meeting.  “When are people who deserve these houses going to get them?” one woman asked.

The pocket of Grier Heights where newcomers are moving in also has its own name — Elizabeth Heights. That itself is jarring to some people who have called the neighborhood home for years, even if there are historic roots to the name (the original name for the area was Elizabeth Acres).

But Elizabeth Heights has also closed itself off in some ways that are painful to the neighboring streets. Many community events are organized through private Facebook groups or email lists that leave others uninvited.

Both of those issues were an undercurrent to the ding-dong-ditch incident and remain just below the surface today.

“I don’t have a problem with them moving here, but it’s about respect,” said Antoinette Wallace, who lives in Grier Heights in a home her husband’s family has lived in for several generations. “They look at us like we don’t belong here.” 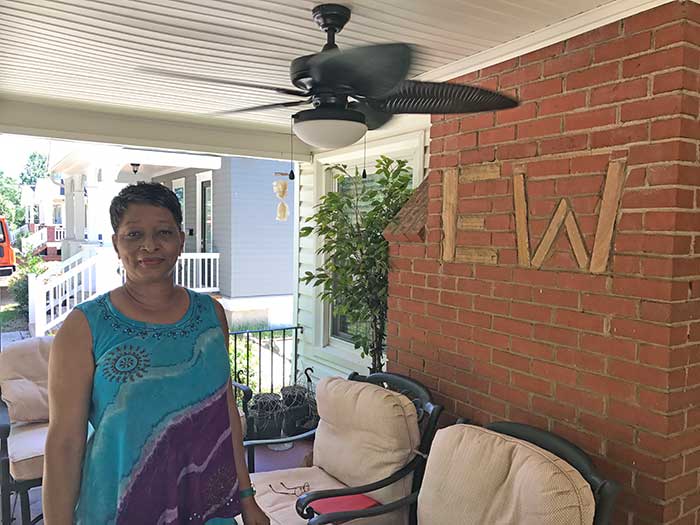 In many cases, the concern is not with individual people moving in, but the larger trend as a whole.

On Darryl Gaston’s street in Druid Hills, there are four white families who recently moved in to what is a predominantly black neighborhood. In one case, one of Gaston’s friends sold their house to a “wonderful white gentleman” after more than 60 years there.

Gaston said there is no real racial divide in the neighborhood right now. But he does see a difference in motivations. Some of the newcomers to the neighborhood are buying there because they know what’s coming, he said. They know that Heist Brewery will soon open a location in the area. They know about the massive development coming at Camp North End.

[Agenda story: Two miles from Uptown, the Druid Hills neighborhood is in line for massive change]

“Black folk, overall, don’t have a problem with white folk moving in, per se,” said Gaston, who grew up in Druid Hills and is now the neighborhood association president. “If there is a problem, the problem is, are you pushing me out?”

A difference in expectations

Many affluent families are drawn to the tree-lined streets and quaint houses that many of these neighborhoods have. They see potential in the more run-down properties and eagerly await the progress that comes from more of them being fixed up.

But some of the conversations about that can carry racial overtones, even if unintended.

“Racism and racial bias, it gets hidden under a conversation that purports to be about aesthetics,” said Amalia Deloney, who lives in west Charlotte.

She said she often hears conversations loaded with coded words or phrases, like comments about a home where the grass is high, or the walls have chipped paint, or where there are toys across the yard. She said that homes get labeled as “bad properties” that need to be changed.

Sometimes, the people making these comments don’t realize the racial tensions hanging in those words. Gaston, from Druid Hills, said he often has conversations with new, white neighbors about these differences.

“You have to be very careful when you start talking about ‘those people,'” Gaston said. “It’s not that they’re being offensive. It’s just that they just don’t know.”

But these differences in neighborhood expectations can also spill beyond community meetings and into calls to law enforcement.

Noise complaints, loitering, multiple cars in a driveway, people coming and going at odd hours in the night — all have resulted in calls to the police. This, too, can be grating to long-time residents to whom these “problems” are just how the neighborhood is.

“You have a vision of what you want the neighborhood to become. What you are doing is enacting your vision using the infrastructure the city gives you,” Deloney said.

“This idea of coming with the intention to stay and make it what you want, that’s really what the tension is.”

In several neighborhoods, community groups, nonprofits and homeowners associations are working to bridge the divide.

In Grier Heights, there’s an active movement to bring people together.

“We do study and fellowship programs just to get people together,” said Don Gately, who leads CrossRoads Corp., the nonprofit that’s building the new homes in the neighborhood with the goal of improving the quality of life without displacement. “Just to tear down barriers and build relationships.”

Several large steps forward are already evident in the Belmont neighborhood, a rapidly changing area next to Plaza Midwood.

Many neighbors observed the discrepancies between nicer new houses being built next door to smaller homes in need of repair.

Early efforts to bridge the divide weren’t very successful, admits Vicki Jones, the president of the Belmont Community Association. She is white and moved to the neighborhood in 2007.

More recent events have been much more successful. In June, they shut down Belmont Avenue for a block party, where people came together to eat, draw with chalk, and otherwise mingle. The event was extremely well-attended, Jones said. 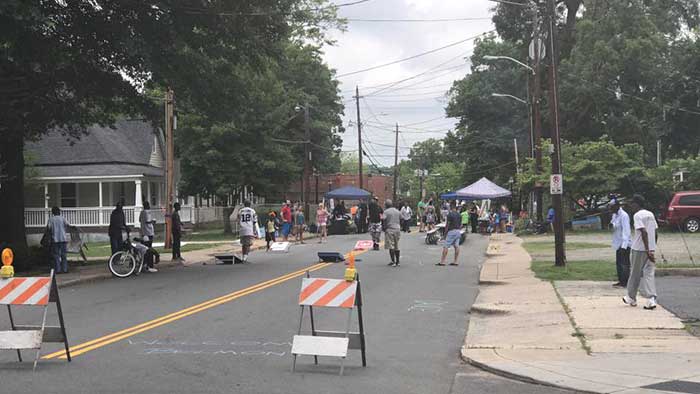 The Belmont neighborhood is now working on a project that will survey all residents of the neighborhood about what they’d like to see there — from coffee shops to laundromats to groceries. It will lead to a temporary installation of some of the concepts they come up with.

Jones says she believes there will be differences of opinion on what people want to see, but ultimately there will be plenty to agree on.

“We take baby steps forward all the time,” she said. “It takes a while to build trust and we are trying to do it by getting people together.”

‘We try to go about all of it delicately’

Once those events are over, though, day-to-day life continues. And that’s where the real connections are made.

There are barriers. It can be hard to relate to people with a much different upbringing and personal history, several people said.

“Particularly across race and class lines, people tend to have some fear of one another,” said Greg Jarrell, a pastor and co-founder of QC Family Tree. He is white and has lived in west Charlotte for years.

“For somebody who’s moving into that, at the very minimum, you have to recognize that you are walking into a place that you haven’t belonged. Maybe you could belong, but the only way you can do that is by being careful, paying attention and showing the hospitality that makes a good neighborhood work.”

It can also be hard to know how to reach out.

“You gather with people you’re comfortable with,” said Ben Page of some of his newer neighbors.

Though Page admits he could be perceived as part of the problem — he is white and has lived in the Grier Heights neighborhood for six years — he says there’s a difference between people who move into the neighborhood for the real estate investment and those who move in to become a true part of it. 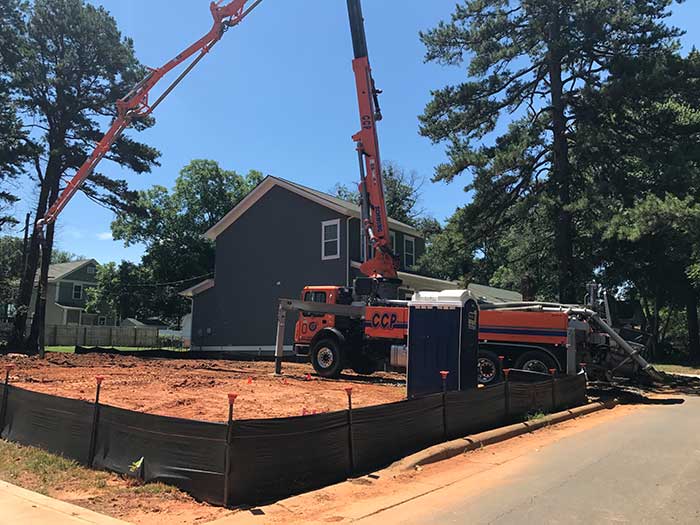 Even white families with the best of intentions are working to figure out how to responsibly integrate into these formerly minority neighborhoods.

Johnny Wakefield moved into Grier Heights earlier this year. When his realtor first showed him Heflin Street, the boulevard of rebuilt homes, he initially recoiled. The kids playing on the street were all white in one of Charlotte’s most historic black neighborhoods.

But his family gets by on a single teacher’s income, so they qualified for downpayment assistance that comes with the affordable housing program managing these new homes. After a year of credit checks and paperwork, they ultimately moved in.

The Wakefields are trying their best to be neighborly. Johnny and his wife Abbey play with his daughter in an inflatable pool and invite neighbors from both Heflin and surrounding streets to sit down and connect. He’ll soon put a picnic table there as well to help build those relationships.

“It’s delicate,” he said. “We try to go about all of it delicately, slowly, and intentionally, recognizing our privilege here and trying to leverage that for some good.” 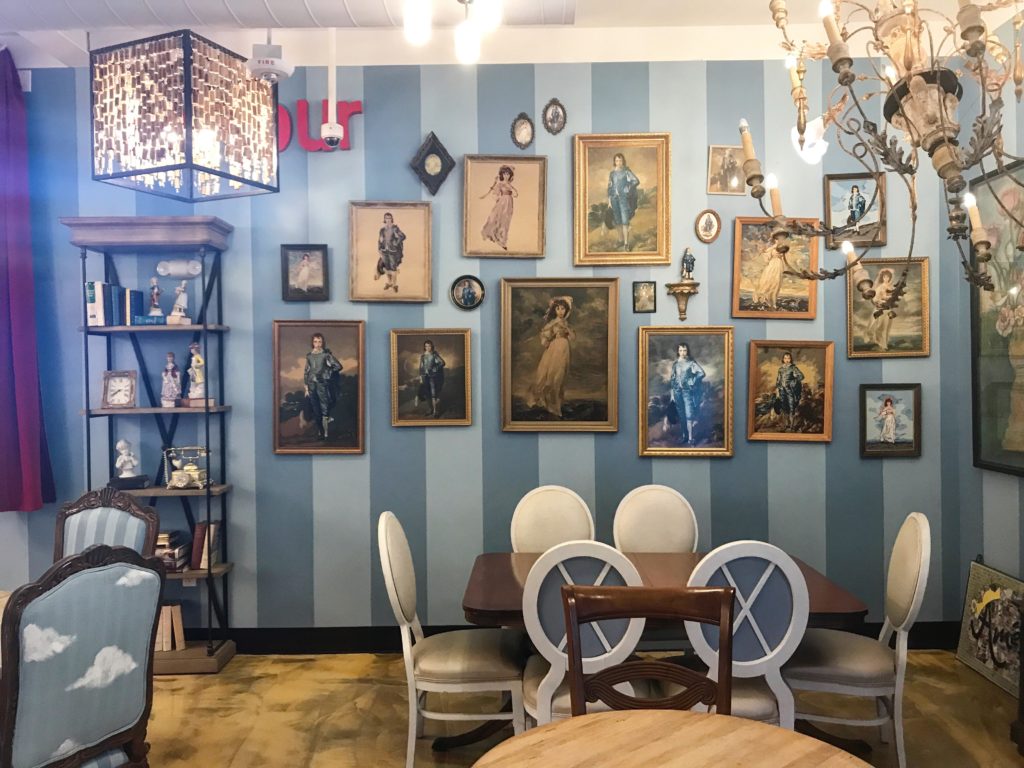 Amelie’s will open its Park Road location this Saturday