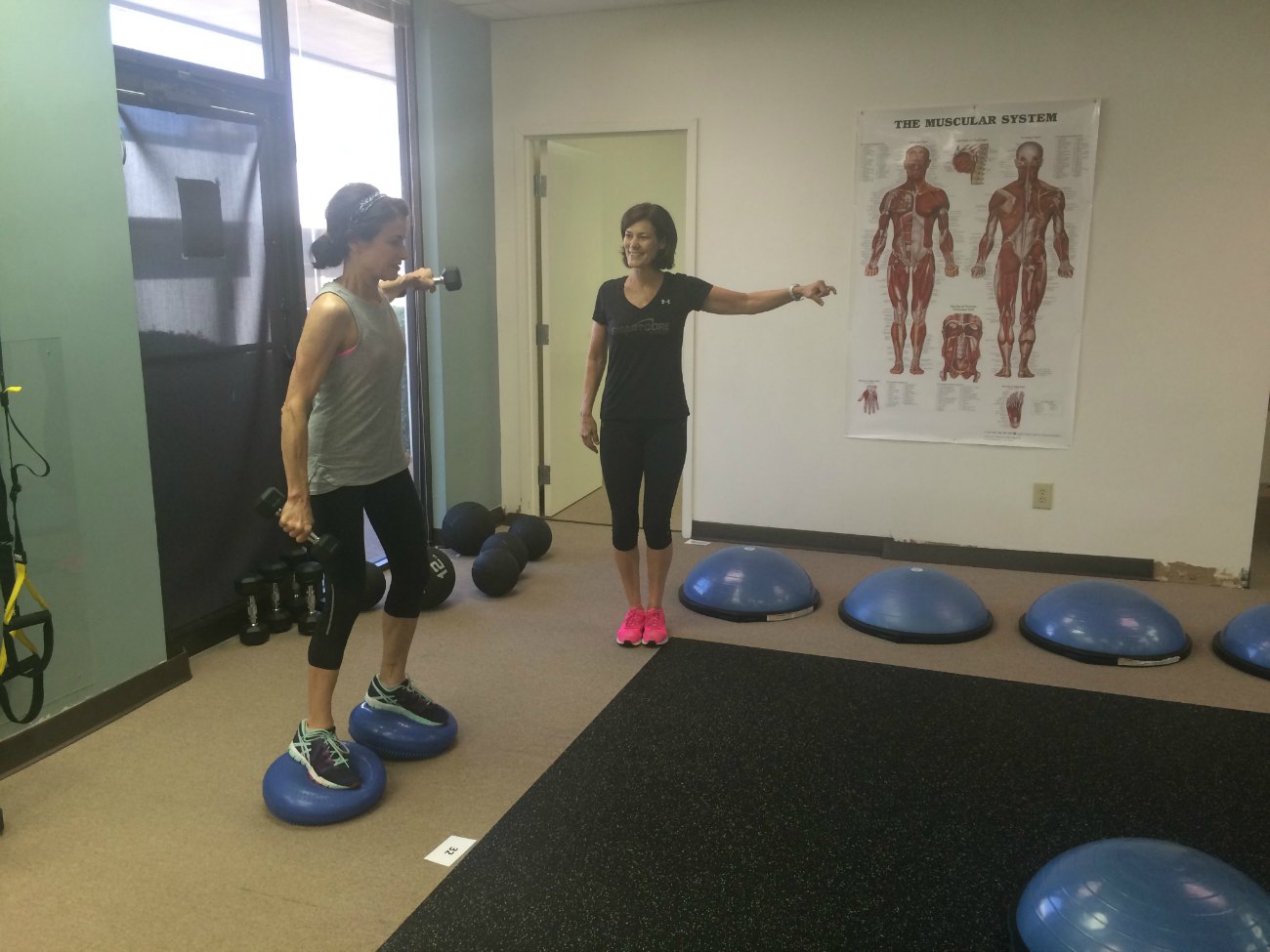 I had no idea what I was getting into when I agreed to try out a class at SmartCore Fitness. I knew it was about core strength, duh, but how that would manifest as an hour-long workout was a mystery. What I found was familiar equipment and exercises combined in unfamiliar ways that throw off your balance and build up strength by forcing you to stabilize. I like it.

Take, for example, a lunge. Pretty basic straight forward exercise, but now stand on two Bosu balls and add a standing one-leg rope pull crunch. Whaaat? Yeah, that. Or there’s the TRX suspension trainer, which is again pretty straightforward, but hey at SmartCore let’s go ahead and stand on a wobbly piece of foam and see how it goes…

What sounds intimidating actually isn’t at all because the concept is designed around a personal training-style private and semi-private teaching model for close instruction, and every single move can be adapted to accommodate injuries or varying levels of fitness.

Classes are built around intelligently sequenced circuits with a laminated card at each station that tells you how many reps to do. In my class the reps ranged anywhere from 16 to 50, and if you don’t have to take breaks in the 50-rep sets, I don’t know what kind of voodoo fitness you’re practicing… The SmartCore concept comes to us from 14-year fitness veteran and founder Denise Duffy, who built an impressive following as a trainer at the Charlotte YMCA before launching SmartCore in April of last year. Former Panthers (and Colts) player Steve Justice rounds out the SmartCore training team. (Both Denise and Steve also teach at Flywheel.) Denise says the workout really is for every age and fitness level and I believe her because in my class alone we spanned several decades for sure. She told me the story of a sedentary 72-year-old woman who went from barely able to get up off the floor on her own to hiking Machu Picchu with the help of her SmartCore training regimen. Counter that with other clients ranging from professional athletes and yoga teachers to everything in between and they’ve got everybody covered. Classes are by appointment only and are $46.50 per hour and clients usually come in anywhere from two to four times a week.

I finished my full circuit in about 45 minutes and was pretty pleased with myself at which point Denise informed me her SmartCore veterans do the loop twice through and that I could keep going.

I’d had more than enough so I said “thanks but no thanks” and went back on my way at least slightly more physically balanced than before. Can SmartCore balance the rest of my life, too?