What the hell is LuLaRoe and how do you buy it? 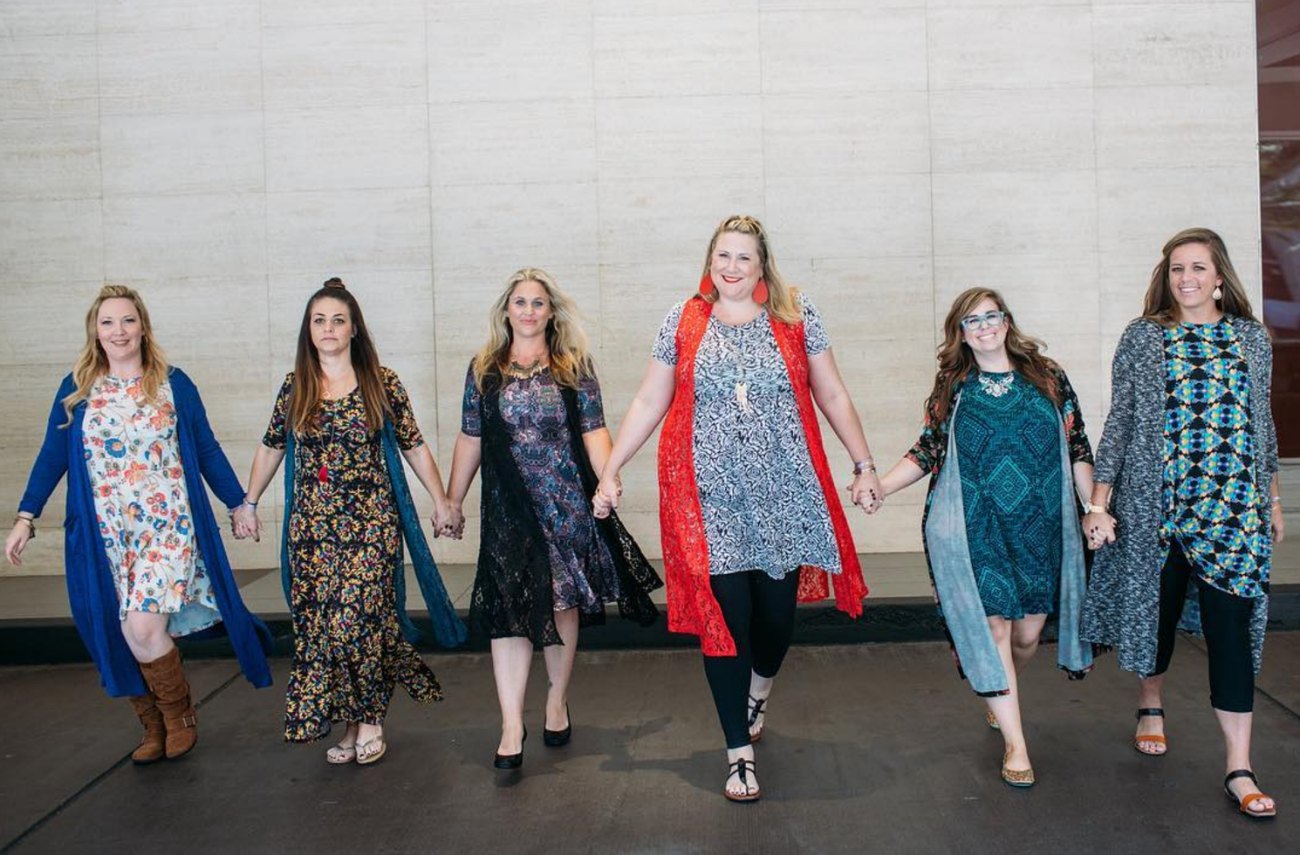 Utter the name LuLaRoe and at least one woman within earshot will invite herself into the conversation with a breathless testimony about the softest leggings EVAAAAR.

She’ll say the patterns are a bit much but they’re just. so. soft. She’ll use the word “buttery” to describe the fabric. She’ll tell you to feel her leg (seriously, feel her leg!) and insist that you have to buy a pair for yourself.

She will not, unfortunately, have an easy way for you to do that.

That’s because LuLaRoe, a women’s fashion brand launched in 2012 and best known for its stretchy pants, is sold by way of multi-level marketing (MLM), a strategy that rewards independent salespeople for the selling of product as well as for the recruitment of additional salespeople. Some might call it pyramidal in structure.

This means you can’t buy LuLaRoe leggings on the company’s website or in brick-and-mortar retail stores either. You can only buy LuLaRoe directly from one of their estimated 35,000 Independent Fashion Retailers, known as consultants.

Since I spend a good portion of my life in leggings, I decided to go forth and give these buttery britches a try. 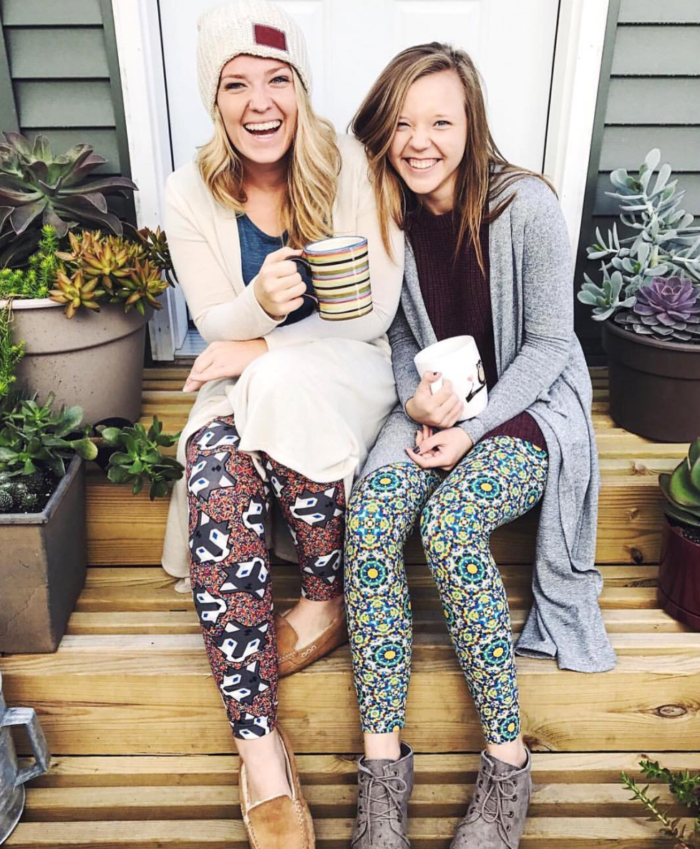 When I first mentioned LuLaRoe in the office, our college intern chimed in immediately, saying she could get me the phone number of a girl in her sorority who sells it.

A phone number? For buying leggings? In 2017? Do the leggings come with weed? What’s happening?

I had so many questions. Specifically: How in this the year of our lord 2017 can I not just click a button and have an e-commerce purchase show up on my front porch the next day? More importantly, how can I avoid speaking to a human to obtain my leggings?

I passed on the phone number and kept looking for my own supplier, which led me to LuLaRoe’s retailer map. 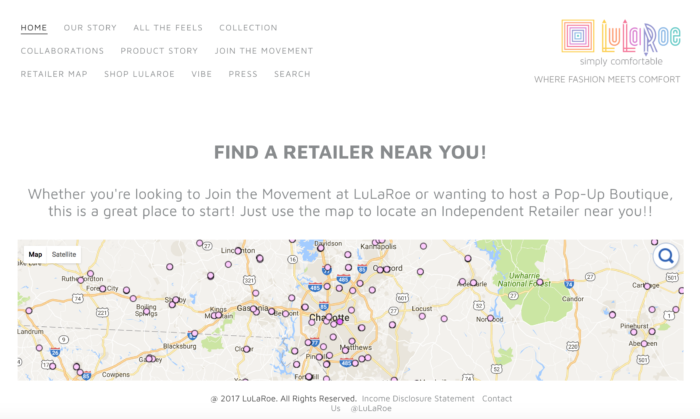 In Charlotte, there are 17 LuLaRoe Independent Fashion Retailers listed inside the 485 loop.

Although consultants do host in-person pop-up parties akin to our mom’s Tupperware parties of yore, Facebook selling seems to be the far more common (and convoluted) strategy.

I requested access to 3 private Facebook groups to try and figure out how to get my hands on these elusive leggings. Within about 48 hours, one of the groups I’d joined announced an upcoming “album sale” at 8:30 p.m. on March 2.

I wasn’t sure what to expect in my first LuLaRoe Facebook sale.

But I’d heard that the leggings (especially black or neutral colored items) move fast. The Facebook group I joined had more than 8,000 people in it and I hate most colors so I came prepared to pounce right when the sale started lest I miss my chance to get black leggings and figure out once and for all how this whole charade works. 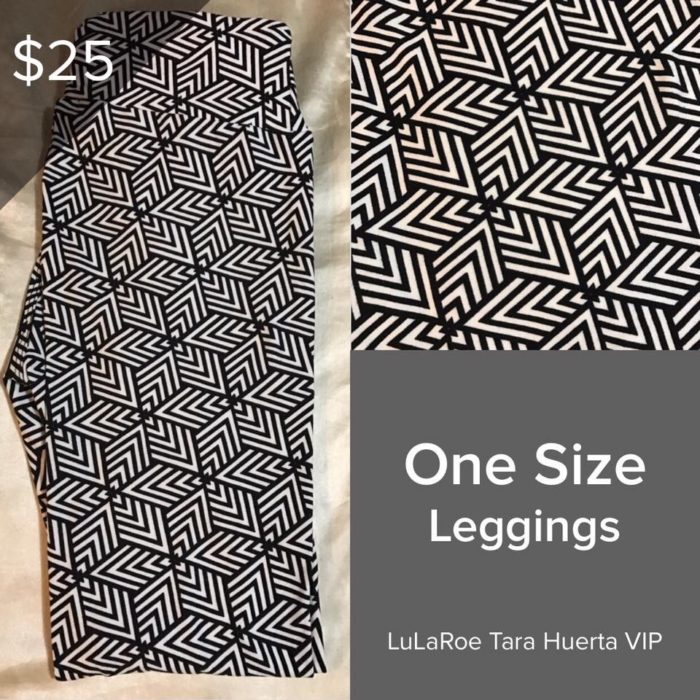 Here’s what I learned…

There were no black leggings in sight in this particular album sale so I frantically commented on the next best thing — a pair with a black and white geometric pattern ($25 plus $3 shipping). Once I’d made it through the process, it was all a lot more straight forward than it had appeared from the start. And my consultant was just so freaking nice to me it made me feel bad for ever rolling my eyes at these stretch pants. 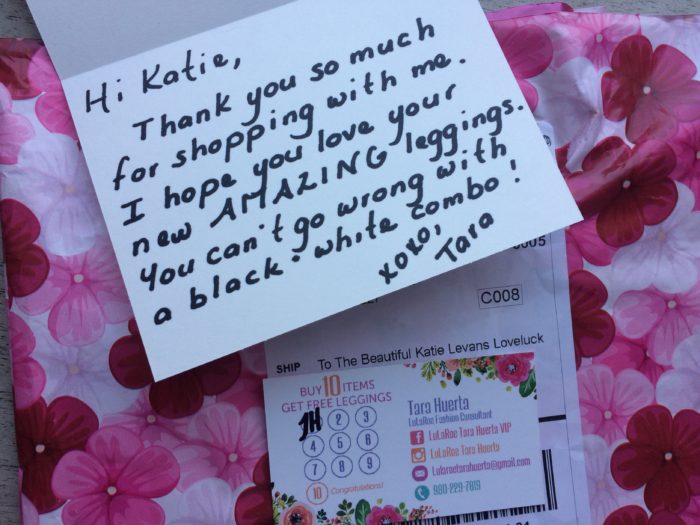 My take on the product?

The cynic in me really wanted to hate these leggings but I just can’t. As promised, they’re exquisitely soft and flattering. But they confuse me a little bit.

They’re not performance athletic wear and they’re not an everyday item I’d wear to work either. For me, they’re some kind of in-between leisure wear — like a better-looking version of my big grey sweatpants or my new “going out” sweatpants, if you will. LuLaRoe leggings strike me as something I’ll wear to Target every Sunday from now until they disintegrate off my body, basically.

But they’re not for everyone. There’s an entire Facebook group (16,000 members strong) dedicated to people voicing complaints about defective and ripped LuLaRoe merchandise. It’s also worth mentioning that the leggings I’m wearing are “one size,” which sounds debatable. But they do come in a “tall & curvy” size too, and according to the sizing chart, the OS is intended for sizes 0 – 12 and the TC is intended for sizes 10 – 20.

For buyers like me, LuLaRoe leggings can be a fun cult lifestyle obsession. For sellers, they can be a life-changing business opportunity.

Tara Huerta, the woman who runs the wildly popular Facebook group I shopped, started selling LuLaRoe in October 2016. She fell in love with the brand after finding that the flattering fit of the clothes (they sell more than just leggings) reignited a body confidence she’d lost following the birth of her third child.

“These clothes gave me my confidence back,” she said. “I felt beautiful again. I was proud of how I looked.”

Huerta is a stay-at-home mom who works every other weekend at an Urgent Care Facility but LuLaRoe is her personal primary source of income. (Her husband also works full time.)

Although she prefers not to disclose her revenue, Huerta gave me a pretty clear idea of how just substantial her LuLaRoe cash flow is. “I will say that I make more in one 24 hour sale on Facebook then I would make working a full month at my previous full time job,” she said.

Huerta says 95% of her business is online and 5% is in person, a split that makes it possible for her to stay home with her kids (ages 10, 21 months and 8 months) and still provide for her family.

Of course, not every LuLaRoe seller can make a living off leggings.

LuLaRoe consultants pocket somewhere between 45% and 60% of their merchandise sales as well as monthly bonus checks for reaching additional sales and recruitment goals. Although some consultants can pull six-figure salaries from this, the majority do not.

According to the company’s 2015 income disclosure statement, the average annual bonus payment made to all U.S. consultants at all ranks was just $90.65 (although that doesn’t include income earned through sales to customers).

On the flip side, an elite subset of consultants racked up annual bonuses as high as $368,000 in 2015 (and, again, that doesn’t even count income earned through sales to customers). 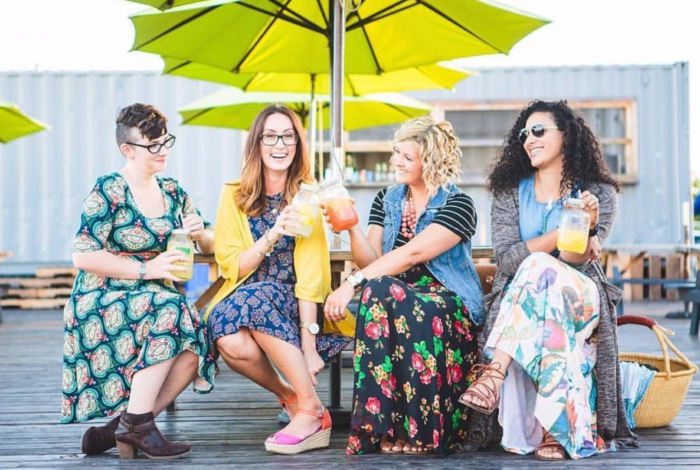 To sell LuLaRoe — or “join the movement” as they say — you’ll have to find an eligible consultant to sponsor you first. Huerta’s sponsor is in New Jersey and although they’ve never met, she calls her her “inspiration.”

After that, you’ll have to make a significant investment in inventory. Huerta declined to comment on the LuLaRoe startup cost due to company policy but Business Insider reports it’s a hefty $5,000 minimum to get started.

Ouch. According to Huerta, she and her husband recouped their initial investment in the first six weeks. And it doesn’t sound like she’ll be slowing down any time soon, in large part because of her customers.

“They are the heartbeat of my business and my business is nothing without them,” she said. “The support they have shown my small business has truly blessed my life. They have given me confidence, drive and purpose.”

Much to my surprise, this empire-building leggings subculture sounds pretty tempting as I sit here schlepping words on the internet for a living. But I think I’ll stick to what I’m good at and the one pair of LuLaRoes I purchased — which, by the way, are most definitely buttery.