I go to the dermatologist for a skin check every year around my birthday because I’m paranoid about getting skin cancer. Fair skin, light eyes and my mom’s track record will do that to a girl. I’m like a walking statistic and/or I’m just a hypochondriac. Either way, I go.

Last week I had my fourth biopsy and then this week got the not so surprising call that the results came back abnormal. It’s “benign but suspicious” and thus will be my second full excision. As my mom always says, “I’m not going to die from something so stupid and little as a mole so when in doubt, take it out.” True that, mom. Wear your sunscreen, kids. And go see your dermatologist. I bet you don’t even have one.

Let freedom ring with 26 Fourth of July festivities in and around Charlotte
I scrounged around for as many southern-fried freedom festivities as I could find. Here are 26 activities to keep everybody occupied next 4th of July weekend.

Inside the writer’s mind: 10 questions with Charlotte author Jim Mitchem
This is such a good interview. Jonathan is an insightful interviewer, Jim is a brilliant mind. Just read the whole thing (or listen; we’ve got the audio). Tidbit: “I don’t have the time or energy to be anything but authentic.”

Top 25 reasons to live in Ballantyne
I got yelled at (insofar as one can be yelled at on Twitter) for making fun of Ballantyne. Now Gi’s here with 25 convincing reasons why it’s actually awesome like: multi-bathroom homes, good schools and proximity to cheap gas. Mutiny.

Behind the Kitchen: A conversation with Miles Payne from littlespoon
Vanessa chats with Miles about his need for organization (labels out!), the secret to work-life balance (Coors Light), building a team (it’s about trust), and Charlotte restaurant competition (or lack thereof).

7 delectables Charlotteans past and present eat in the summer
Tim argues that of Charlotte’s few traditions, food is one of our strongest. I’m only down with five out of these seven so can I be a Charlottean or did I just surrender citizenship to fried frogs legs and cold fried chicken?

Work Life of Brandon Carter, Marketing & Publicity Specialist for Blumenthal Performing Arts
Brandon has a 4-minute commute, a love for 90s country music, an occasional 4am Youtube black hole spiral (don’t we all?), pro level cheap shopping skills, an incredibly late bedtime and a super cool job. Get to know him.

Wells Fargo donates $100,000 to Charleston shooting victims’ families. Following the Panthers’ lead, Wells Fargo has made a hefty donation to honor the victims of last week’s church shooting in Charleston.

It’s official. We’re in a drought. The Observer reports the NC State Climate Office has declared a state of drought for the first time in two years. South of the border, South Carolina is in the same boat upgrading to Stage 1 incipient drought for 28 counties.

Have a great weekend, and catch us on Snapchat. I gave Ted the login credentials and told him not to embarrass us so we’ll see. 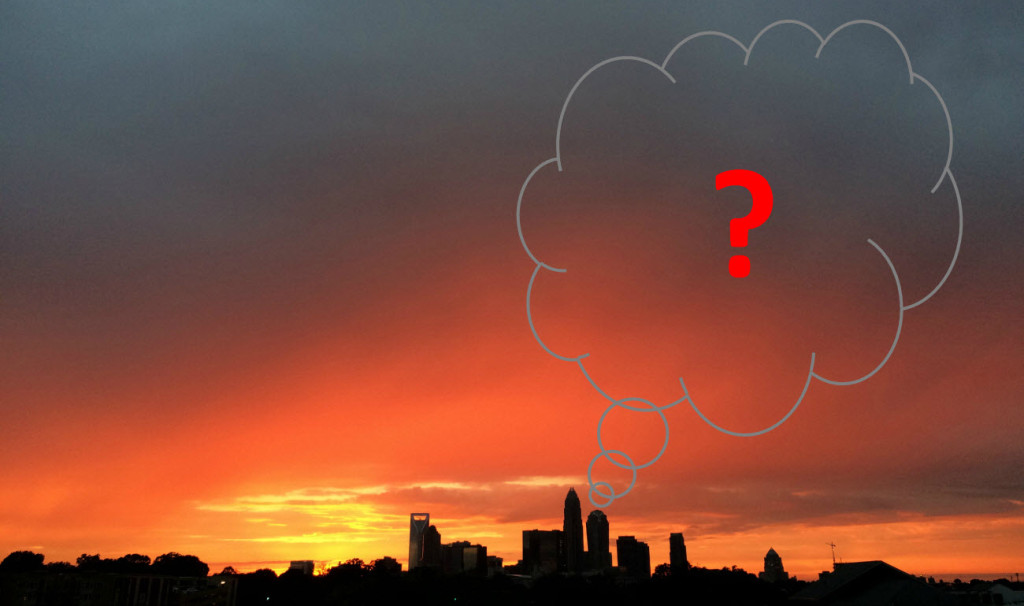 11 things I guarantee you didn’t know about Charlotte