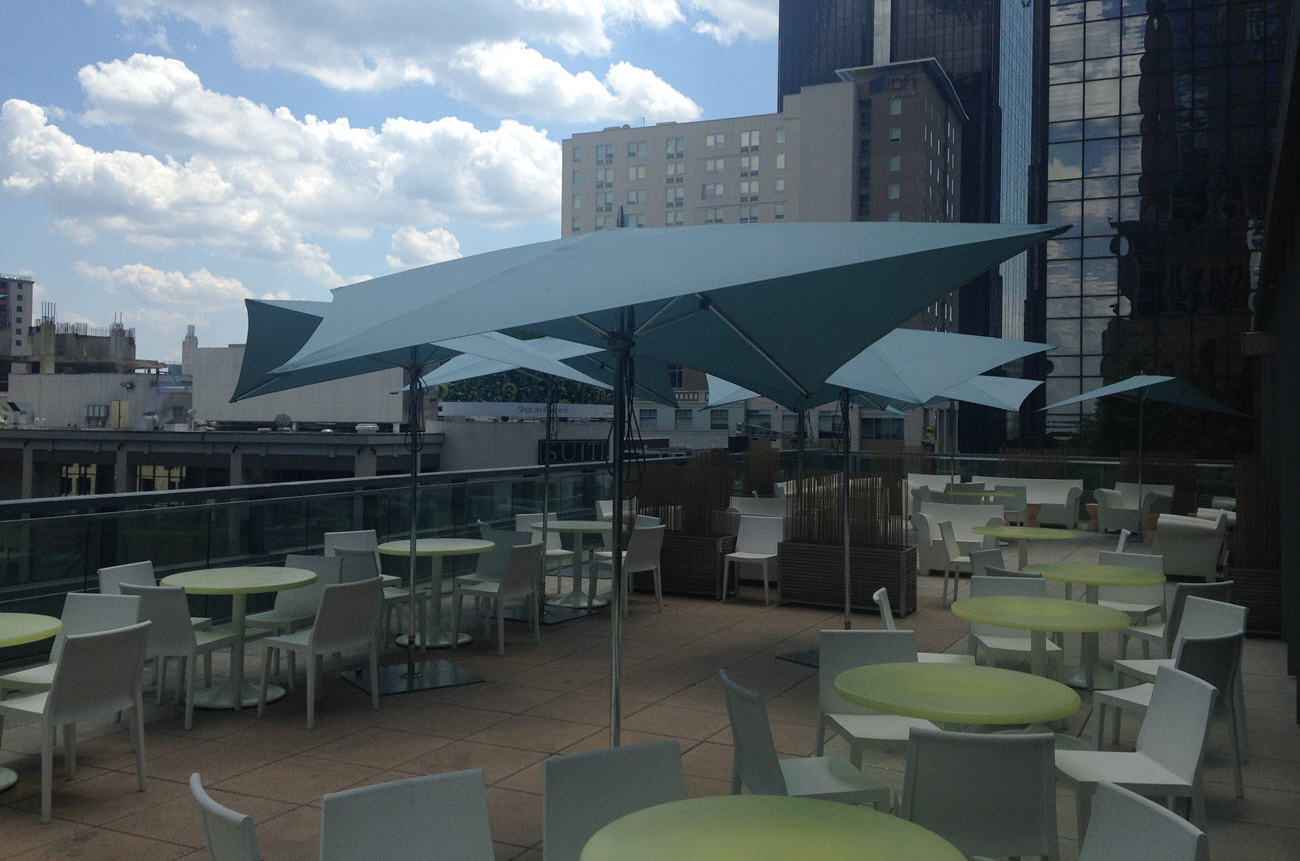 I’ve written a few of these “Eat This Not That” guides to eating local in Uptown, but so far Volume One , Volume Two, and Volume Three have been location-agnostic and assumed that you can go outside without bursting into flames.

However, if you have either (A) been outdoors recently or (B) engaged with another human in small talk, you know that it has been horrifically hot outside.

This means that walking down to 7th Street Market or Latta Arcade for lunch turns into a tradeoff between eating something local and delicious and having giant sweat stains in the kneepits of your work pants for your meeting at 1pm.

Not a good look.

Fortunately for you and me, Uptown planners in their street-level-retail-hating wisdom anticipated Charlotte becoming an uninhabitable sun-scorched wasteland and built the Overstreet Mall for rat race participants like you and me.

If it’s raining or 99% humidity like it has been, the Overstreet Mall is the greatest concept going. If you’re trying to convince people that Uptown Charlotte can support shopping on the weekends, then it’s the bane of your existence. While the vast majority of food options in the hamster habitat are chain restaurants, there are a few places to satisfy your desire to eat local(ish) as well as not frighten your friends and coworkers with your overheated visage. Why you go there: The only reason to go here is because you arrived in town this morning and took an Uber to a meeting at the Charlotte Plaza and only had three minutes to pick up coffee. This seriously might be the worst place in all of Uptown to get your morning coffee. The Starbucks in the BofA Plaza at least has great people-watching, and you aren’t cramped against a wall while you wait in the massive line. It is more comfortable to get coffee in a submarine than this place. It’s made worse because you could skip the line and go next door to Showmar’s for a faster, cheaper, and better coffee. Don’t go here.

What you get: Shoved into a wall

Where you should go: Taste in Founder’s Hall, essentially two levels above Jos A Bank. It can be tricky to get to with the escalators. If you get lost, ask one of the seven security guards milling about.

Why you should go there: While not quite as noble a cause as The King’s Kitchen, Taste has a partnership with Johnson & Wales University, so in a way you’re supporting local chefs getting their start in the Charlotte food scene. That’s pretty cool. They have a full complement of breakfast items, and they actually serve Starbucks products at their coffee bar (for slightly cheaper too). The omelet/breakfast sandwich bar is legit, but the real reason to go to Taste is the space itself. Not only is it centrally located in Founder’s Hall and accessible on the Overstreet Mall, it’s one of the most underrated spaces to eat in Charlotte. It overlooks Founder’s Hall and the Epicentre, and it even has an upstairs and outdoor area that is often empty, despite having great views and comfortable seating.

One caveat to my Taste recommendation: In my personal opinion, the lunch options are just meh and it gets slammed from 11:45 to 12:55 with bankers grabbing something quick before scurrying back to their desks to work through lunch. OCC regulators frown on lunch breaks apparently. Why you go there: Because just like above, you only have 15 minutes to get lunch and you know it’s right there. Well guess what muchacho, for whatever reason 201 S College St. is home to the three worst-designed restaurant counters in the Charlotte area (Starbucks, Panera, and McDonald’s on the other side of the College St. walkway) and the massive line is out the door. I really don’t think whoever designed the retail space in this building gave any thought to where people would stand. Unless you’re 3rd in line or closer at Panera you have to stand in the doorway and hold the door open for other line-standers. That’s the worst. So awkward.

Where you should go: Brad’s between the Grant Thornton Building/Charlotte Plaza and BB&T Building

Why you should go there: Honestly I was probably a bit harsh on Panera just now. Ordering online and picking up your food at the one in Cotswold is a miracle of modern technology. But Brad’s is still better, and it’s not a national chain. Before going to their website to write this, I didn’t know there were other locations in New York. I also didn’t know there was a moderately heartbreaking origin story for Brad’s (notice the dates in the tribute on the bottom). Can’t help but want to support Jeremy and crew after that.

But even if Brad’s is a national chain, the subs and soups there are excellent. I love the simplicity of this place. Typical deli sandwiches, basic bread, basic toppings, boom. Delicious. Also, it wouldn’t surprise me if the Brad’s Italian Dressing had some sort of powerful narcotic in it. It’s fantastic and wildly addictive. Brad’s is also one of the better places to dine in within the Overstreet Mall. Many of the other restaurants don’t have seating.

Note: Of all the places I’ve told you not to go to, I am the biggest hypocrite when it comes to Dunkin’ Donuts. I love this place. I don’t even care that the profits are funneled directly out of Charlotte into some bunker in Massachusetts. Give me donuts now.

Where you/we go: Dunkin Donuts between BofA Plaza and the BB&T Building

Why you/we go there: Because you’re either from the northeast and you hold Dunkin’ Donuts in some wild reverence usually reserved for breeds of dogs or Beyonce, or you have no willpower. For me, it’s totally a lack of willpower. Just because I briskly walked to the bus stop this morning doesn’t mean I deserve two Boston cream donuts. But still, here I am. Oh and the hashbrowns here are so good. You’re a cruel temptress, Dunkin’ Donuts. I hope my doctor never sees me here.

What you get: Medium coffee and an apple fritter.

Where you/we should go: Freshii between the BB&T Building and Two Wells Fargo

Why you should go there: Full disclosure, Freshii isn’t local. It’s Canadian and has locations in over 60 cities. But the concept of fast and affordable healthy food is a distant cousin of the “eat local” movement, so if we’re going to bend the rules, it might as well be for Freshii. If you haven’t been here, check it out. I’m not a huge health food nut (due to poor willpower, see Dunkin Donuts note above), but this place has good stuff that really does taste great. I go for the Green Energy juice. The price is right at $5.84, and drinking it makes me feel justified for eating something terrible at Dunkin’ Donuts (full disclosure I have had a Green Energy juice, then immediately afterward eaten a bowtie donut. Again, no willpower). There you have it. Your guide to eating local-ish while staying pleasantly cool in Uptown. In general, I’m not a fan of the Overstreet Mall, but when you need it, you can’t deny that it’s nice to have. 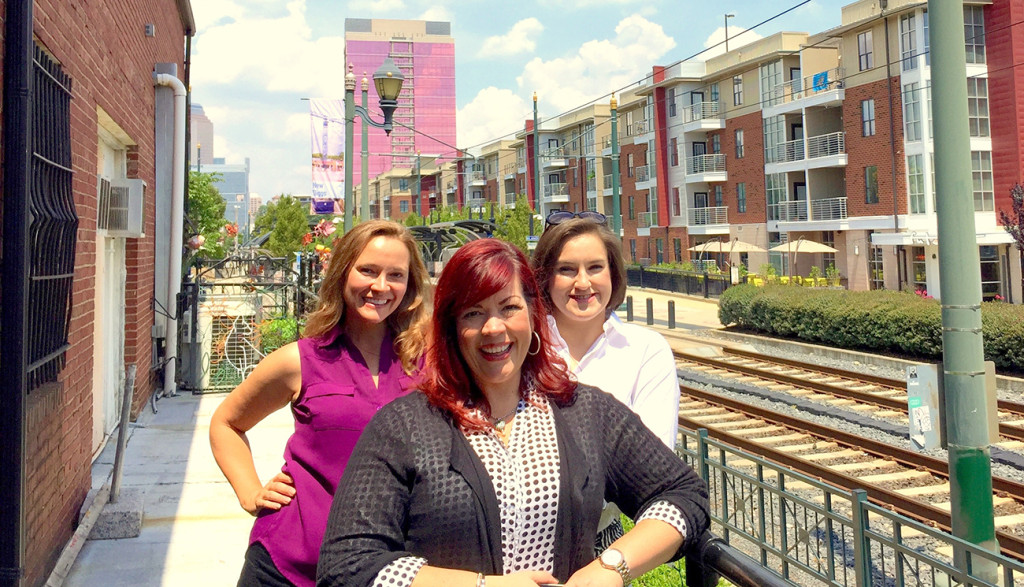 Is Historic South End the next arts district?

by Collin Beck
Most Read
1
Kid Cashew on East Boulevard sets its opening for mid-January
2
Hello Friday. Charlotte Recycling Plant.
3
Starbucks on East Blvd will start to serve wine after renovations
4
Bleu Barn Bistro takes food from farm to food truck
5
May I smell your beer? 26 days without drinking
Most Recent Open Jobs