I met kenT because my girlfriend commissioned him for a Starry Night painting. He’s crazy talented. 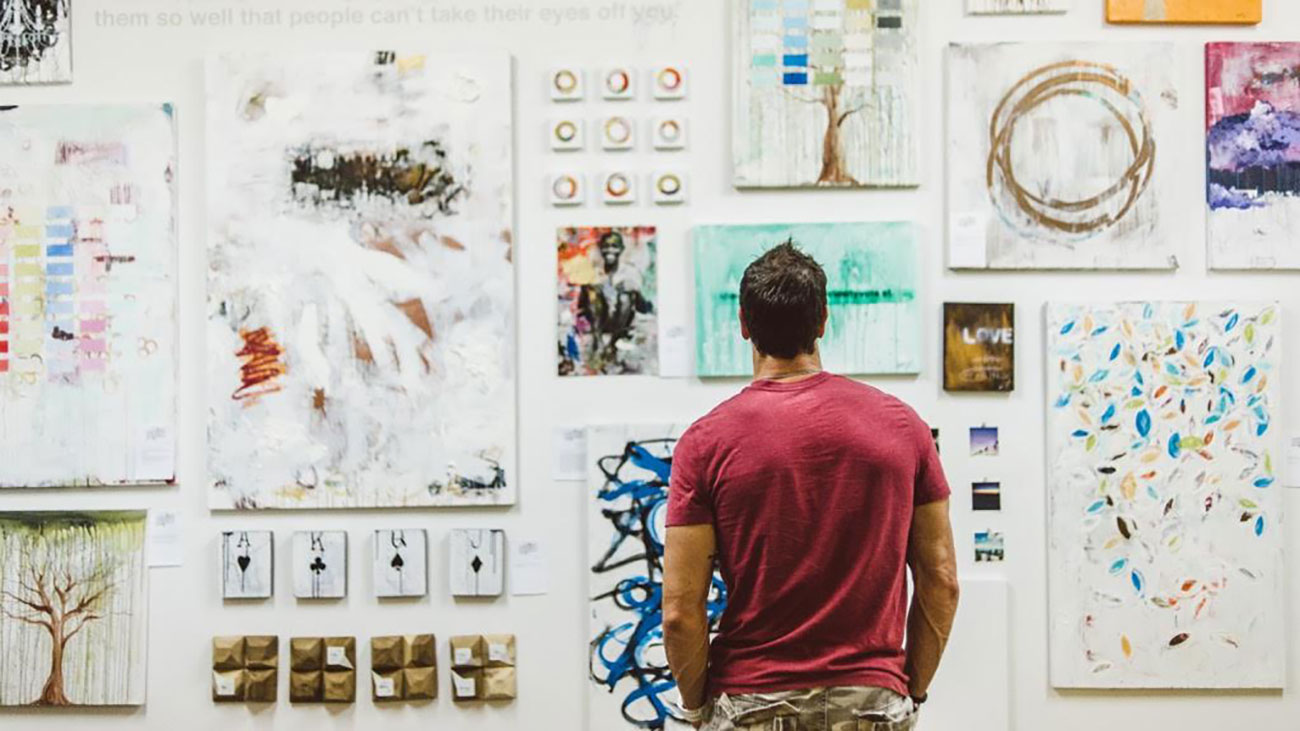 “Art makes everything betterer.” – Sounds a bit odd when you say it out loud, but it’s the credo and roots of Charlotte transplant, kenT youngstrom. 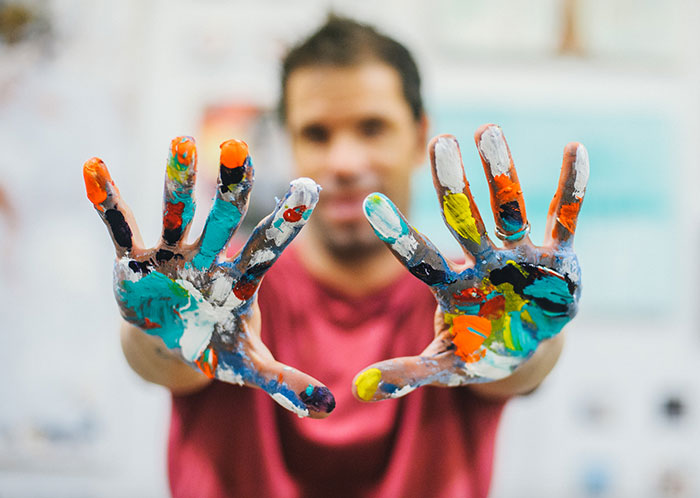 Embarrassingly enough, it wasn’t until recently that I was introduced to local artist kenT.

After attending an evening of art at his studio in Matthews, my girlfriend (full of enthusiasm) had to have an original piece of work. She commissioned kenT to create a sizable piece of art for her home based off his original painting, “Starry Night.”

Speaking to her about the evening, she couldn’t help but gush about meeting him, or as she puts it, this “crazy talented, good looking, down to earth, cross fit dude.”

Shortly after, I was off googling and found that kenT is more than just a good looking dude that knows how to paint. 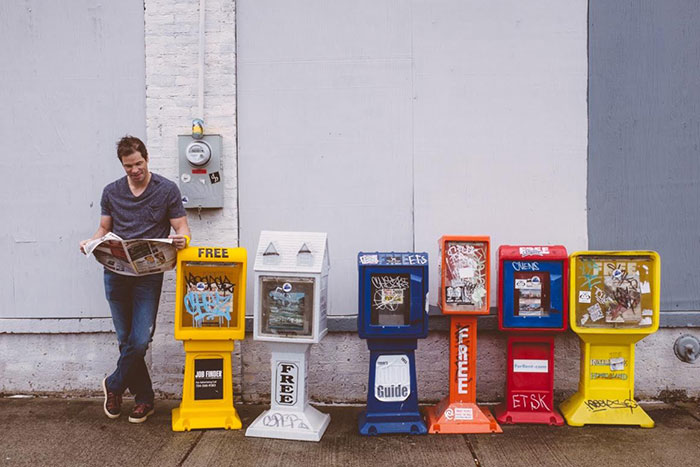 In my research — or nowadays, we call it internet stalking — I was taken aback with the seemingly endless pages of information pertaining not only to his art, but workshops, collaborations with fellow artists, and words of wisdom.

His following, on social media platforms and at design/art studios was remarkable.

How does someone with such a huge presence fly under the radar here in Charlotte? 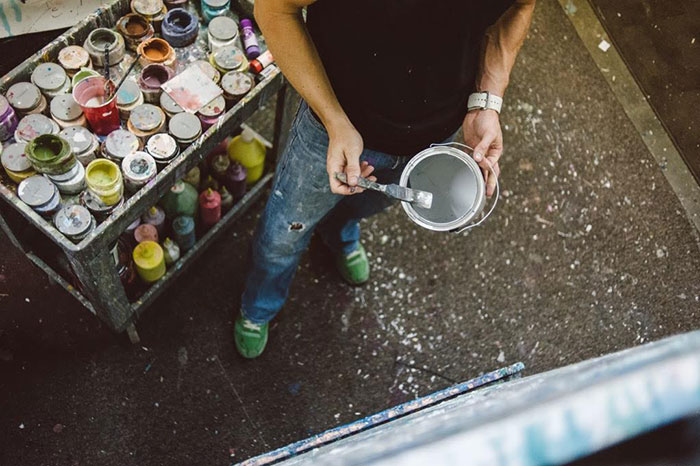 Three weeks later, the piece was complete and kenT was standing in my girlfriend’s living room, painting in hand.

First off, having a piece of artwork personally delivered and mounted to your wall by the artist himself is pretty damn cool, but secondly, I was struck with kenT’s humbleness and approachability. 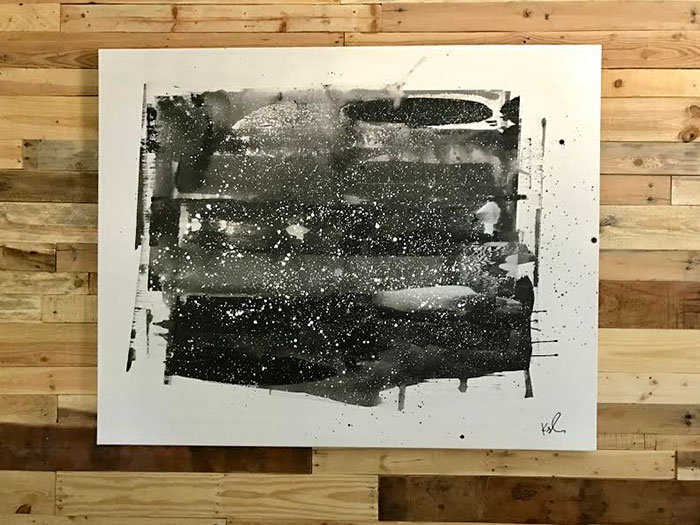 So here’s the skinny on kenT – after moving from Wisconsin, where he was involved in marketing and branding, he moved his family (yes, ladies he is happily married and has two amazing kids) to Charlotte.

You might remember in 2006 that Charlotte was experiencing robust growth both financially and in new construction. kenT linked up with a local outfit and designed some very notable Uptown buildings and establishments. Things were going well – new city and business was thriving – he was living the good life. 2008 happened.

Time seemingly just stood still across the country and here in Charlotte. 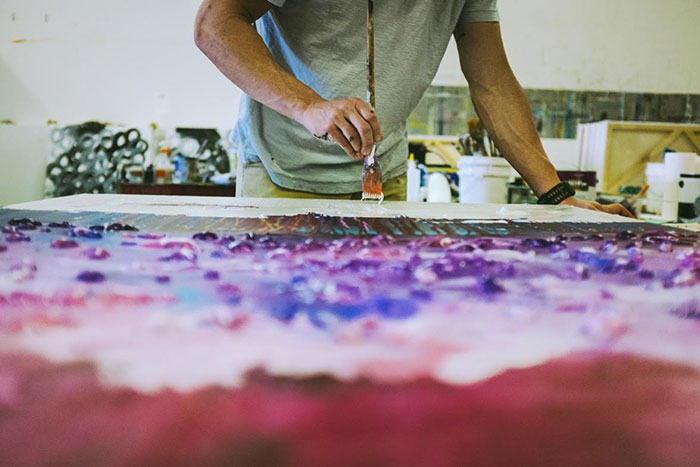 Undeterred by the circumstances at hand and being firm in his faith, kenT pivoted.

Returning to his roots, he began painting.

Having a passion for art but never knowing how to market himself, he took his pieces to juried art shows around the region, including Nashville.

At his first show, he sold zero paintings.

Instead of giving up, he continued to go to art shows and collaborate locally until he took “kenT” out of the picture. When you stop thinking so much about marketing yourself and instead let your talents do the marketing – you find pretty remarkable things can happen and that’s just what he did. 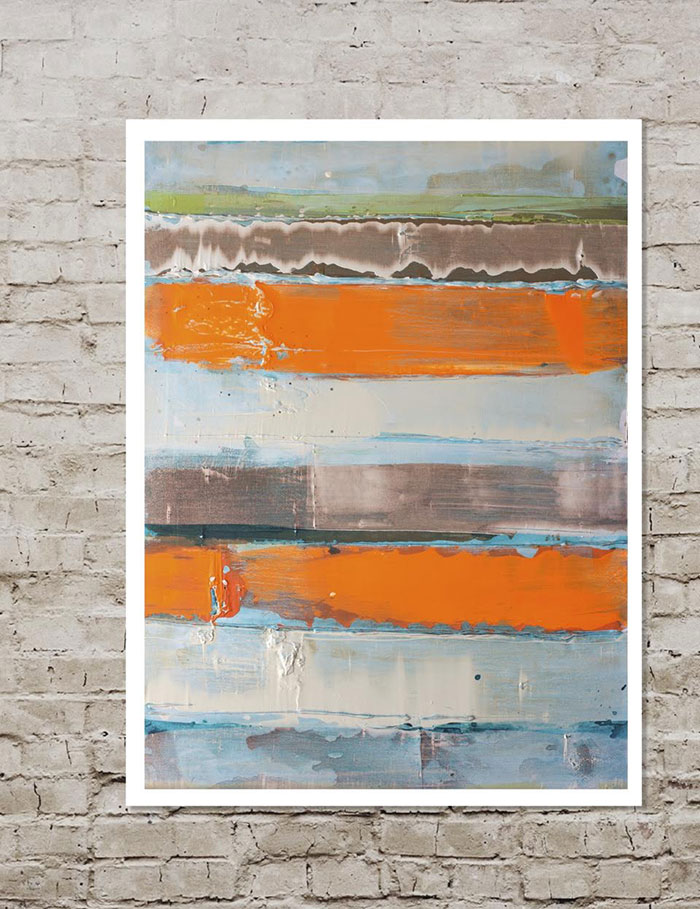 kenT collaborated with a local friend to put together a shutterfly book of his art in random spots throughout Charlotte.

When I say random, kenT was in a junkyard holding up paintings.

Those books titled “Art Makes Everything Betterer” were then mailed to 20 large retail and furniture companies.

Seemed like a long shot, but he got a response.

Not just any response, he got a big one. The company was CB2 – the Crate and Barrel Modern Furniture and Home Décor Company out of Chicago. No big deal. Little did CB2 know that kenT was a one-man show based out of his garage, in Matthews… 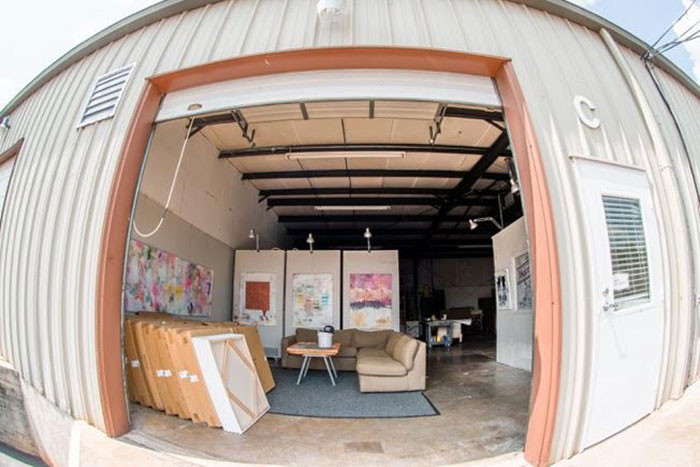 What started as 300 original paintings has now turned into over 2,500 pieces for CB2.

Not only that, do a quick Google search. You probably have seen kenT’s work and you might not even know it. Companies like Lulu & Georgia, Gilt.com, and Urban Outfitters, just to name a few, have captured his artwork in prints, tapestries, bed linens, you name it.

But if that’s not of any interest to you, kenT’s work is now everywhere. Check out the new Marriott, Coco and the Director, and Lunas at Lake.

His work blends in so meticulously with our scenery but holds so much more purpose. Each piece is created with his “let it go” mentality – he paints from the heart. What the piece may mean to him is entirely different from the person who owns it and that’s exactly the point. 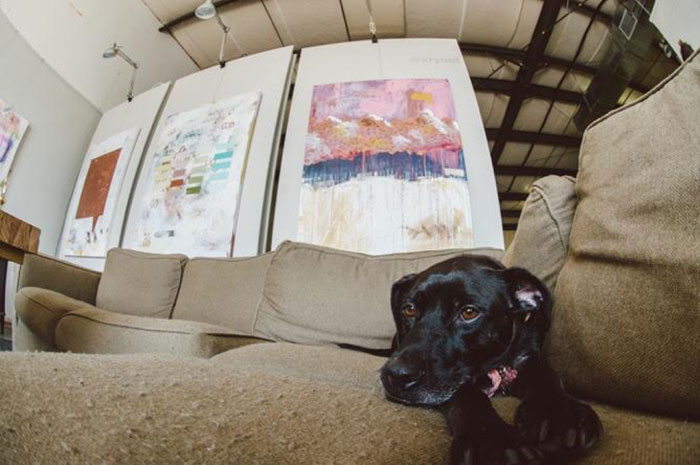 Other than painting, kenT lends himself to community outreach, coaching his son’s soccer team, and teaching others through workshops and local painting sessions.

Best of all kenT shops local. His paint and canvases are from none other than Binders.

He cares about small businesses and Charlotte as a whole. 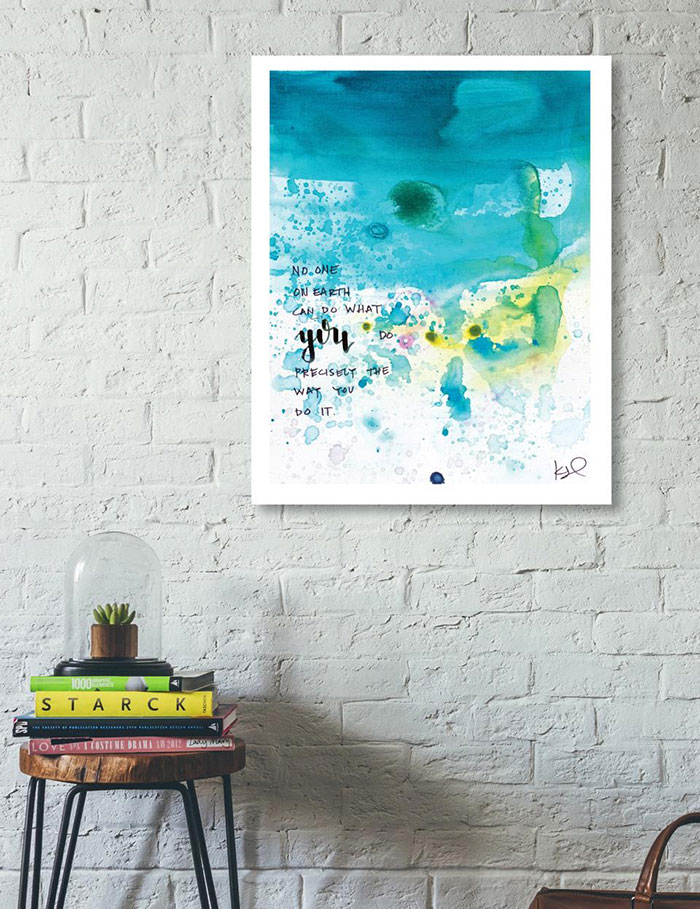 On November 10, kenT has created a one of a kind, original piece of art to be auctioned off at the Wine @ the Market silent auction benefitting Florence Crittenton Services a non-profit organization.

The organization aids at risk women of all ages by providing numerous services to promote health and hope.

The event will be held at Atherton Mill and Market and is sure to bring promise to members of our community that need empowerment and guidance. 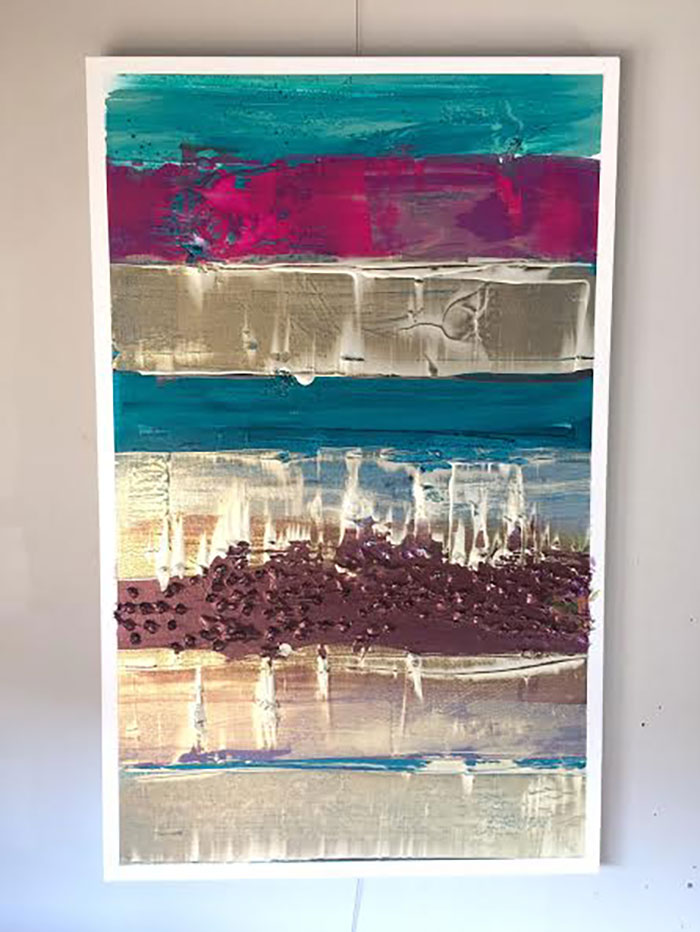 All images courtesy of Allison Fowler 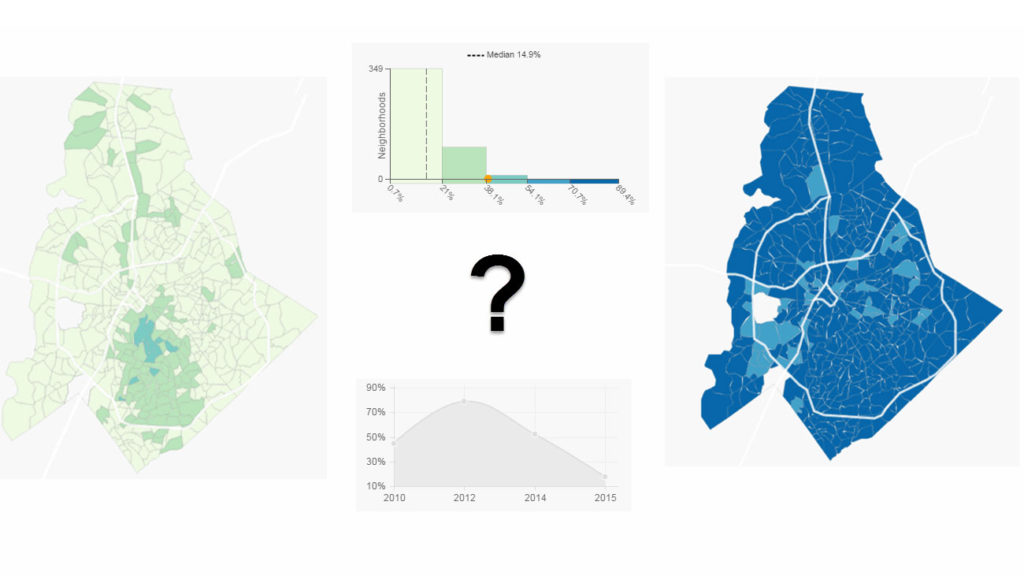 Who actually votes in Mecklenburg County?