Am I the only one that thinks Charlotte millennial fashion is a throwback joke? Like most people, as I’ve aged I’ve become crustier about certain things. For example, sometimes I think about printing out notes like these and keeping them in my car to communicate my displeasure at people’s inability to park correctly. 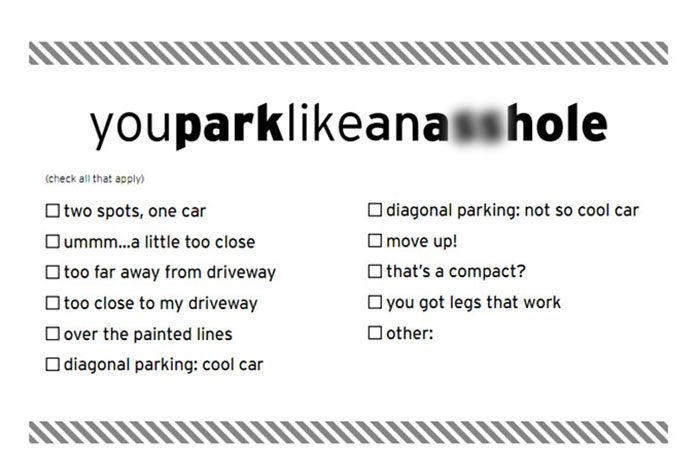 It’s not just parking that grinds my gears. I get crusty when I look around in a restaurant or other public place, and groups of people have their faces mindlessly buried in their phones. I often think about starting a YouTube channel where I post videos of myself slapping phones out of people’s hands and running away while cackling, leaving them in a confused state of anger that can only be sated by advancing to round 438 of Candy Crush.

I also get crusty when younger people do things that take us backwards as a society, especially when it’s something that previous generations (i.e. mine) worked so hard to change.

When I say take us backwards as a society, I don’t mean anything important.

Millenials don’t want to, or aren’t capable of, saving money to buy a first home because their student loans are too high, which in turn screws up the entire housing purchase cycle for everyone? Meh.

Gen Z wants to vote for a self-avowed socialist just because it never dawned on them to go to a college they could afford, and major in something that was an actual job in an actual industry so they could obtain an actual job after graduation? Whatevs.

I’m talking about what the younger generation is doing to clothes. Enough is enough.

Now, I’m not exactly what anyone would refer to as a fashionable person, but I’m not textbook dad-khaki with white running shoes terrible either. I know enough to know I know nothing and to ask my wife if look OK before I leave the house.

But it doesn’t take a fashion blogging Instagram star to recognize all of the ‘80s and ‘90s walking the streets, and I can’t comprehend why.

We strove to create a better society for you – one in which you would never have the misfortune of later questioning why anyone thought it was a good idea to wear jeans with a fold over waist, or a color-changing, temperature-sensitive shirt that always made you look like you had pit sweat even if you weren’t sweating.

And despite all of that effort, you insisted on bringing back ridiculous items of clothing from the ‘80s and ‘90s. Let’s start with tube socks. (We’ll illustrate my points with pictures of my family). 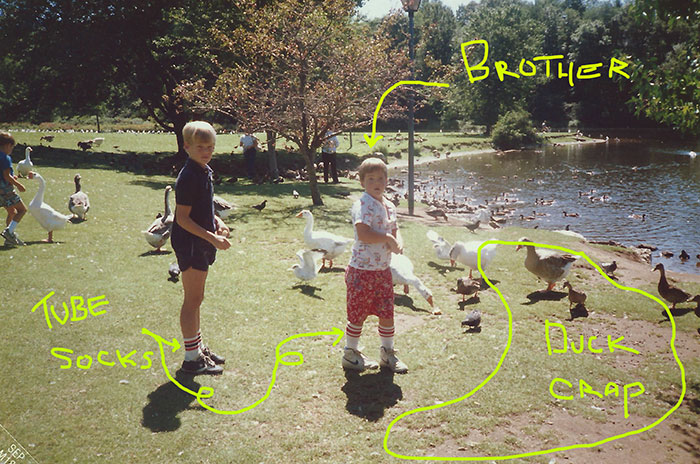 Kid #1 is in elementary school, and every morning at the bus I’m surrounded by kids wearing ridiculous looking socks pulled up to their knees.

Do you understand how difficult it was as a society to end the ubiquity of tube socks in the late ‘80s and early ‘90s?

In 1991, I spent five minutes every morning doing tiny pinches in my tube socks to get the total sock height from 12 inches down to six. By midsummer every kid in school had a mid-calf tan line that made them look like they were dipped in primer. Finally, FINALLY in like 1993 they started selling ankle socks and we were all freed from sock oppression.

You know what made long socks look even more ridiculous? Shorty man-shorts. 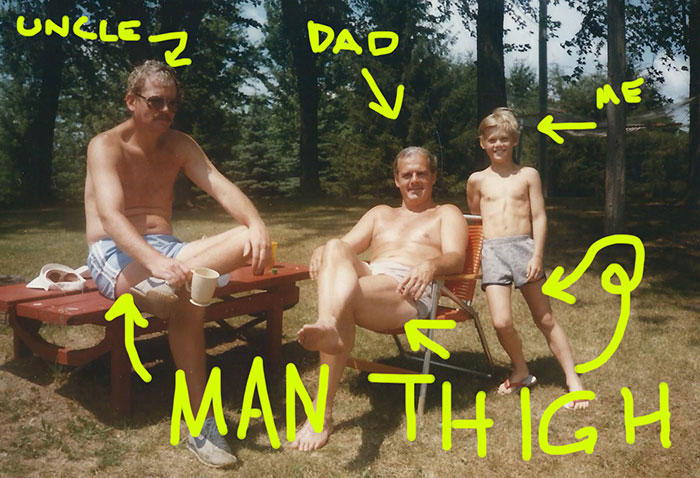 Who decided that it was a good idea to bring back exposure of a man’s thigh?

When I was in high school, my basketball team had nut huggers so high that I used to pull them down around my knees after they came out of the wash in the hope that I could get them to mid thigh.

Now? I was at a brewery on a Saturday afternoon last summer surrounded by so much mid-20s man thigh peaking out of poorly fitting khaki shorts that I wanted to walk around and cover them up like a protective parent sending his daughter to her first high school dance.

Do they even have high school dances any more?

If they do, I bet all the kids will be wearing high-waisted jeans! Ever look at a picture of teenage girls from the 90s?

Sometimes I think fashion people sit around and dream up outlandish ideas just to prove we’re all sheep. “Let’s bring back high waisted jeans!” “No way those will ever catch on again.” Baaaah. Baaaah.

In college I remember buying my first pair of jeans that didn’t rise to the occasion of my belly button. It felt like freedom. It felt like unbuttoning your pants after Thanksgiving dinner. It’s as close as I’ll ever come to experiencing true liberation.

It was kind of like the feeling of putting on a perfectly broken-in hat.

A talent that became outdated around 1999 because manufacturers thankfully stopped putting Kevlar mesh in the front panels. Until, you know, hipsters. 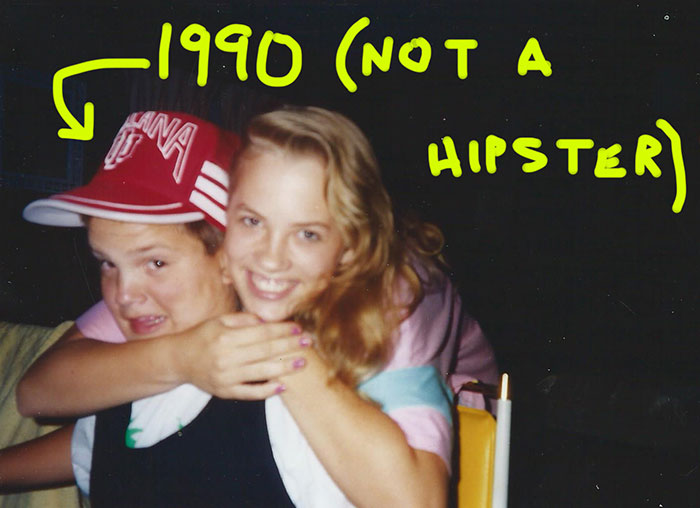 If we had YouTube the most searched phrase would have been “how to break in a hat.” At a minimum it required 15 wash cycles to break down the front panel, a variety of needles and blades to cut out any mesh, followed by shoving the brim in a glass for a week to get some semblance of a bend.

We had to constantly break in new hats because the plastic snapback closure was so crappy that you had to buy a new hat every six months. So thanks, hipsters, for reintroducing snapbacks and undoing years of evolution that led to more durable hat fasteners. It’s called “progress” for a reason.

After Sir John Harington invented the toilet, no one built an outhouse and crapped in the backyard because they felt nostalgic.

You know what doesn’t make me feel nostalgic? Two-toned knock off Wayfarers. When I was a kid, no one – including most adults – spent big money on sunglasses. You bought sunglasses at the gas station or a department store from whatever picked-over collection of sunglasses remained. Which was nothing but two-toned knock off wayfarers.

I saw a teenage boy wearing wayfarers last weekend as I ate ice cream with my kids at Birkdale. He was acting all teenagery and wearing … no … please, no… 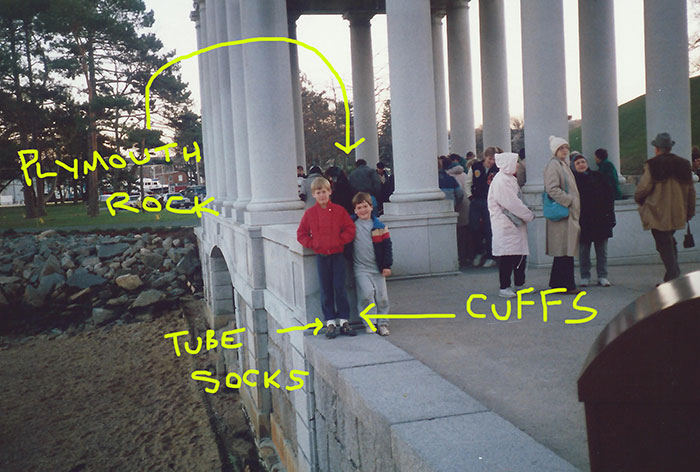 It’s one of the things I love about the South – people don’t wear them that often. In New England – where I grew up – sweatpants are one of six staples in every person’s wardrobe.

The others (yes, even in 2016) are: black jeans, turtleneck, whale belt and at least one thing from LL Bean.

As a kid we had no choice but to wear cuffed sweatpants, which always inched up your leg and exposed your white tube socks. All day long you’d have to pull down the cuff so your sock didn’t hang out – regardless of how short or long the sweatpants were cut.

Finally, at some point in the late ‘90s, we phased out sweatpants for warm up pants so we didn’t all look like flood victims who managed to hang onto their shoes.

So much for progress, I guess.

The sweatpants-clad teen walked into a restaurant and my kids finished their ice cream. People of all ages passed us wearing acid-wash jeans and flannel shirts. I wiped off Kid #2’s face and we headed for the car, past dudes with rolled up pant cuffs and women in jean skirts. Jean skirts.

The next morning the kids came down for breakfast. Kid #2 was wearing a T-shirt and a purple ruffled skirt, and I asked her to go back upstairs and put on shorts because we were going to the park and it’s hard to slide down slides in a skirt. She bent over and pulled up the hemline of her skirt and pointed to her rear end.

“It’s OK daddy, this skirt has shorts in it! Aren’t they awesome!” 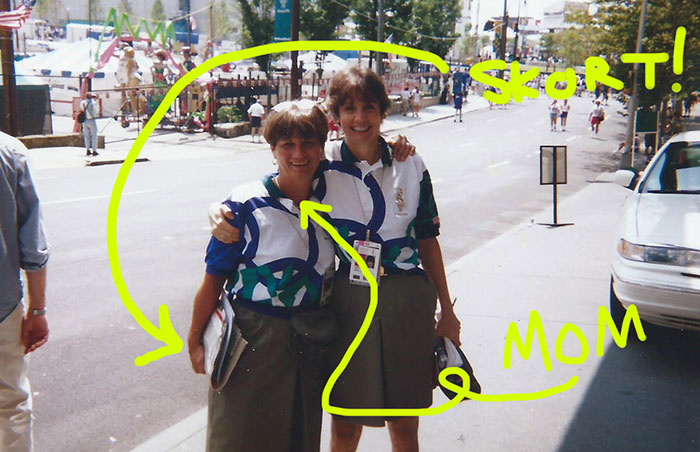 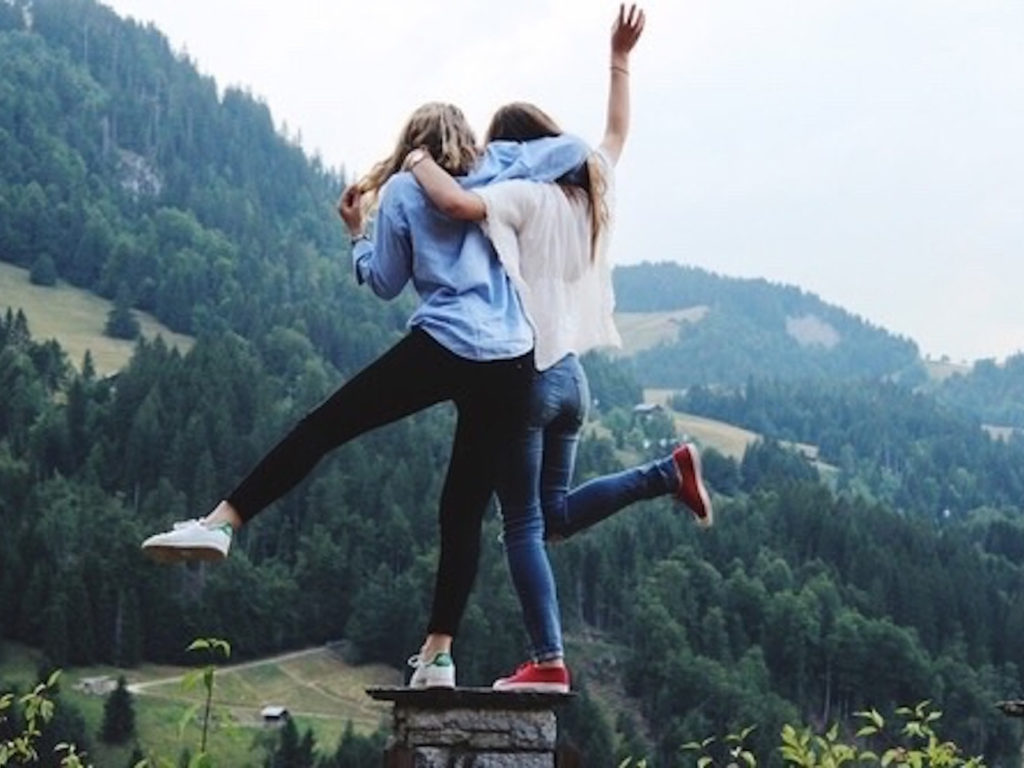 Brandshop is bringing their speaking series back to Charlotte next month. Your guide to the week-long festivities