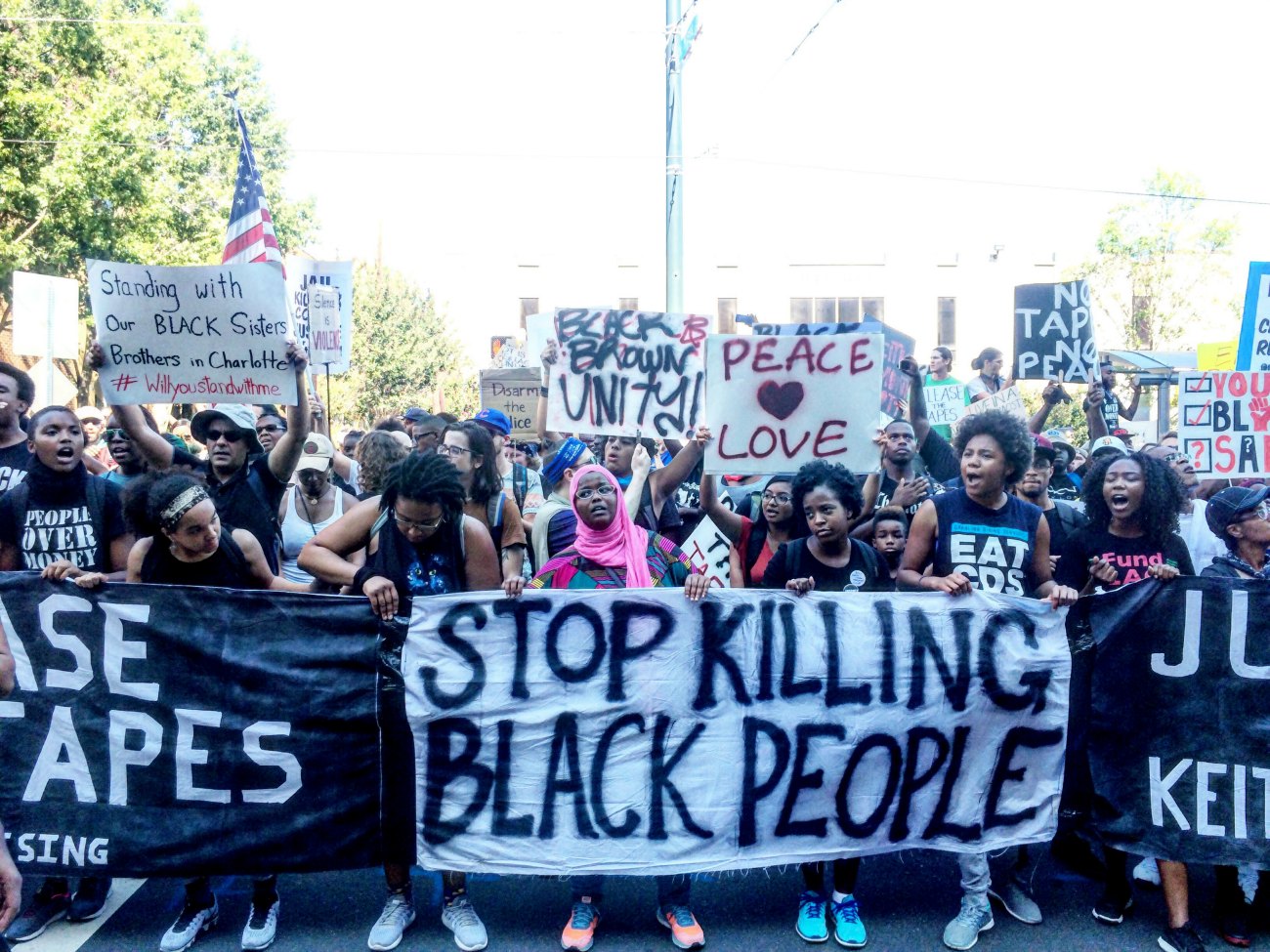 Protesters have maintained a vocal and visible presence in Charlotte since the shooting death of Keith Lamont Scott by Charlotte-Mecklenburg Police officer Brentley Vinson on Tuesday, September 20.

[For additional information on the events last week, see our coverage here, here and here.]

Last Friday, a centralized collective of protesters known as Charlotte Uprising released a list of demands. Since then, CMPD has released footage of the shooting, Mayor Jennifer Roberts has lifted the midnight curfew and the state of emergency has been terminated. Still, protests continue. A closer look at protesters’ demands helps clarify why they march on.

The following is to give context, clarify the protesters’ platform and highlight developments that have taken place since Keith Scott’s shooting on September 20.

“The immediate end to the state of emergency, curfew & the removal of the National Guard”

Gov. Pat McCrory declared a state of emergency in Charlotte shortly after 11 p.m. on Wednesday, September 21 at the request of Charlotte-Mecklenburg Police Department Chief Kerr Putney. The declaration followed a night of mounting tension between protesters and riot police in Uptown resulting in property damage, looting and the shooting death of 26-year-old Justin Carr, a civilian protester.

Rayquan Borum, another civilian, was arrested Friday, September 23 and charged with first degree murder and possession of a firearm by a felon. Borum has confessed to shooting Carr, according to prosecutors.

The subsequent state of emergency declaration involved the deployment of additional resources into the city of Charlotte, including state troopers and National Guard.

Around 9 p.m. on Thursday, September 22, Mayor Jennifer Roberts issued a mandatory citywide midnight curfew. The curfew was lifted on Sunday, September 25. The state of emergency was just terminated Wednesday night.

ALERT: @CLTMayor and @CMPD have enacted a citywide curfew beginning Sept. 23 imposed at midnight until 6 a.m.

In the presence of riot police and National Guard humvees, protesters can often be heard chanting, “I don’t see no riot here. Why are they in riot gear?”

In a statement posted to the Charlotte Uprising site on Friday, September 23, organizers said, “Protesters are criminalized as violent agitators, yet police show up in our communities armed and militarized, under the guise of being peacekeepers.”

Many people in Charlotte, including some protesters, are praising police officers and the National Guard for their service. Images of people shaking hands with and hugging officers were widely circulated throughout the week.

On Saturday, Mayor Roberts tweeted a photo of families posing for photos with the National Guard, adding, “Thank you for serving our city!”

“The defunding of the police department (2017 budget: $246,644,617) and the redirection of those resources to the needs of our communities (including resources for jobs programs, affordable quality housing, transportation, holistic health and quality schools)”

In June of this year, Charlotte City Council approved a $2.45 billion citywide budget for fiscal year 2017 that includes the addition of 88 positions to CMPD (63 sworn, 25 civilian). The Council cites public safety as its highest priority.

The officer-involved shooting death of Keith Lamont Scott was turned over to the North Carolina State Bureau of Investigation on Thursday, September 22.

Members of the Congressional Black Caucus and the NAACP have also called for a DOJ probe into the state’s investigation.

Mayor Roberts said in a city council meeting on Tuesday, September 27 that she has asked the Department of Justice to monitor SBI’s investigation but the DOJ is not actively involved.

Chief Putney tells @CNN the SBI is taking over the investigation.

The police report and portions of body camera and dash-cam footage were released by CMPD on Saturday, September 24.

Charlotte protesters along with the ACLU and NAACP have called for the release of any remaining footage that has not been made available to the public. According to The Charlotte Observer, a spokesman for CMPD said all available footage of the shooting has already been released but that some footage captured afterwards as other officers arrived may be available.

Yesterday, the Observer confirmed that CMPD is withholding more than two hours of additional footage. On Monday the Observer’s lawyer John Buchan requested all remaining footage. 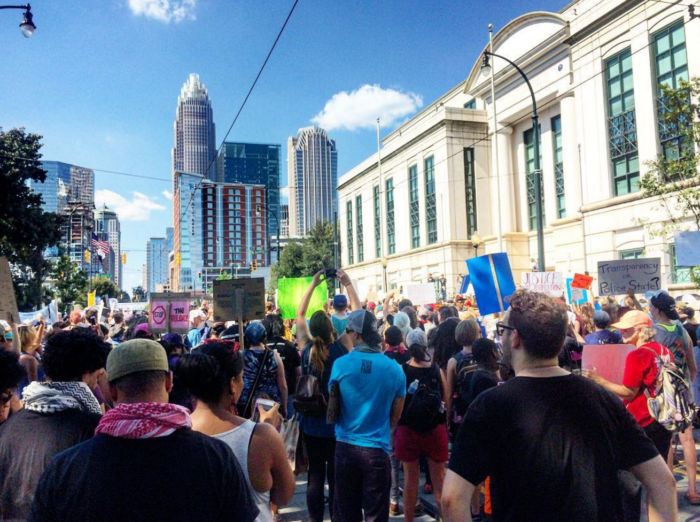 Chants of “No tapes, no peace” on the steps of CMPD headquarters on Saturday

“The immediate and unconditional release of all those arrested in connection with the uprising resulting from the killing of Keith L. Scott & the dropping of all charges”

As of Friday, September 23, 47 protest-related arrests had been made since Tuesday, September 20. Of those arrested, 41 are from the state of North Carolina and six are from out of state. Charlotte residents accounted for 37 of the 41 in-state arrests.

Ongoing arrests are being made for people involved in Wednesday night’s looting and rioting.

Detectives are working diligently to identify looting suspects, sign warrants and make arrests.This is their board of open cases. pic.twitter.com/aTa4NjbBEw

“The release of all the names of the officers involved in the killing of Keith L. Scott to the public followed by their firing, arrest and prosecution”

Officer Brentley Vinson, who fired the shots that killed Keith Scott, was immediately placed on administrative leave following the shooting. No other names of officers have been released.

Channel 9 confirms this is the photo of CMPD officer Brentley Vinson who shot and killed Keith Scott https://t.co/RubNaOmGHy pic.twitter.com/HpGhSYRYlr

“Reparations for the family of Keith L. Scott and all victims of police violence as well as the families of those who have been killed”

The SBI investigation that will determine if the shooting of Keith Scott by police was justified is still underway. If reparations are eventually to be made, that settlement could take years.

In May of last year, the city of Charlotte made a $2.25 million settlement with the family of Jonathan Ferrell who was shot and killed by CMPD officer Randall “Wes” Kerrick on September 14, 2013. A manslaughter charge against Kerrick was dismissed after an 8-4 hung jury vote for acquittal. The judge declared a mistrial.

“Community control of the police, starting with the creation of a civilian oversight board that has the power to hire and fire officers, determine disciplinary actions as well as dictate police policies, priorities, and budgets. The board shall not include police representation and will be controlled by communities most impacted by policing and incarceration in Charlotte.”

Charlotte Uprising isn’t alone in its demand for a stronger civilian review board. The NAACP has called for the creation of a civilian oversight board with the power to conduct independent investigations and discipline CMPD officers. And, according to the Observer, SAFE Coalition NC is also calling for an elected civilian review board with “subpoena power and the authority to discipline officers.”

Charlotte’s existing Citizens Review Board, established in 1997, came under fire in 2013 when an Observer investigation revealed that the board sided with police in all 78 cases reviewed over 15 years. 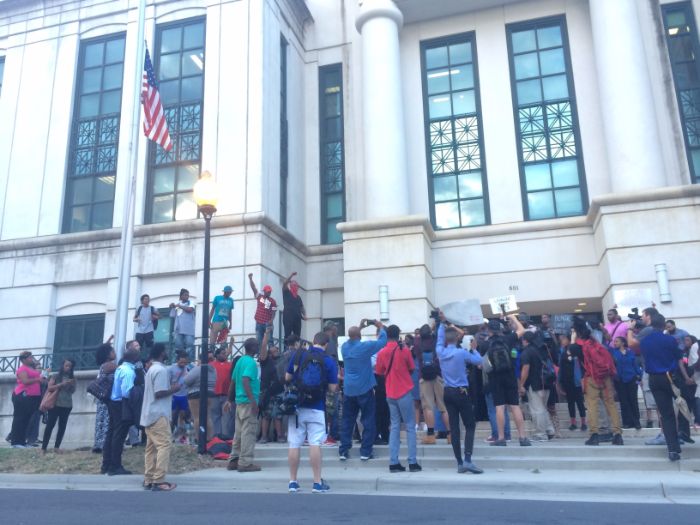 Protesters on the steps of Charlotte-Mecklenburg Police Department

A Charlotte Uprising representative was not immediately available yesterday to comment on the group’s demands.

No one voice speaks for all protesters in Charlotte but Charlotte Uprising represents a large and centralized contingent. 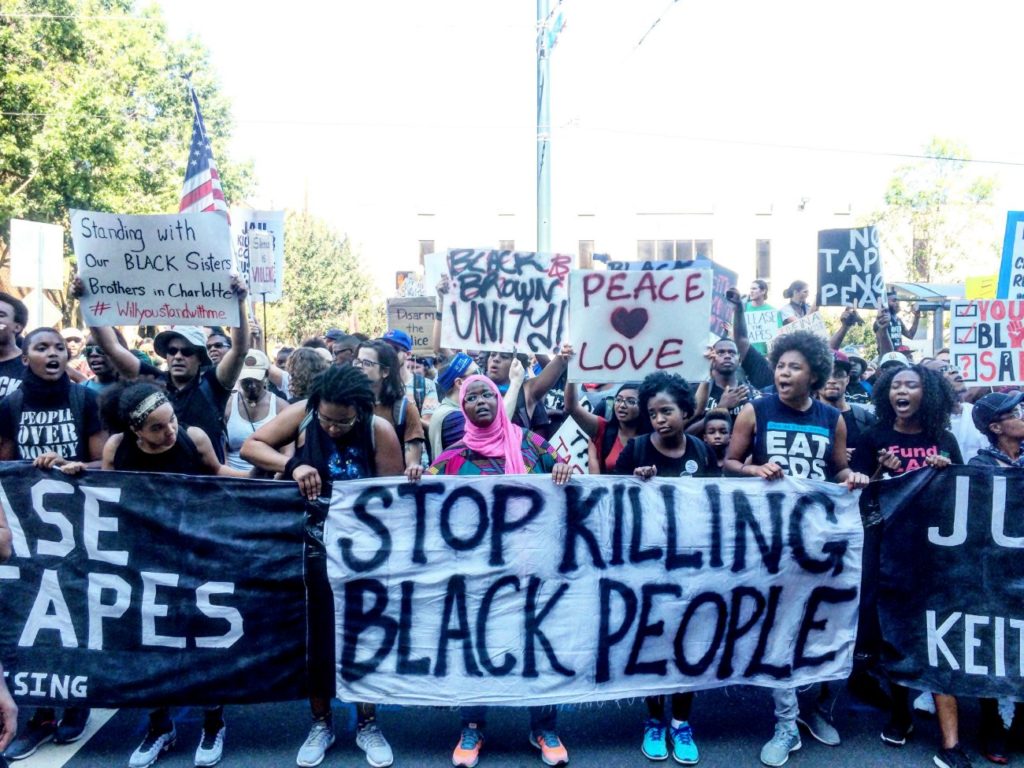 Now that Charlotte is quiet again, what will you do?

by Jarvis Holliday
Most Read
1
Kid Cashew on East Boulevard sets its opening for mid-January
2
Hello Friday. Charlotte Recycling Plant.
3
Starbucks on East Blvd will start to serve wine after renovations
4
Bleu Barn Bistro takes food from farm to food truck
5
May I smell your beer? 26 days without drinking
Most Recent Open Jobs