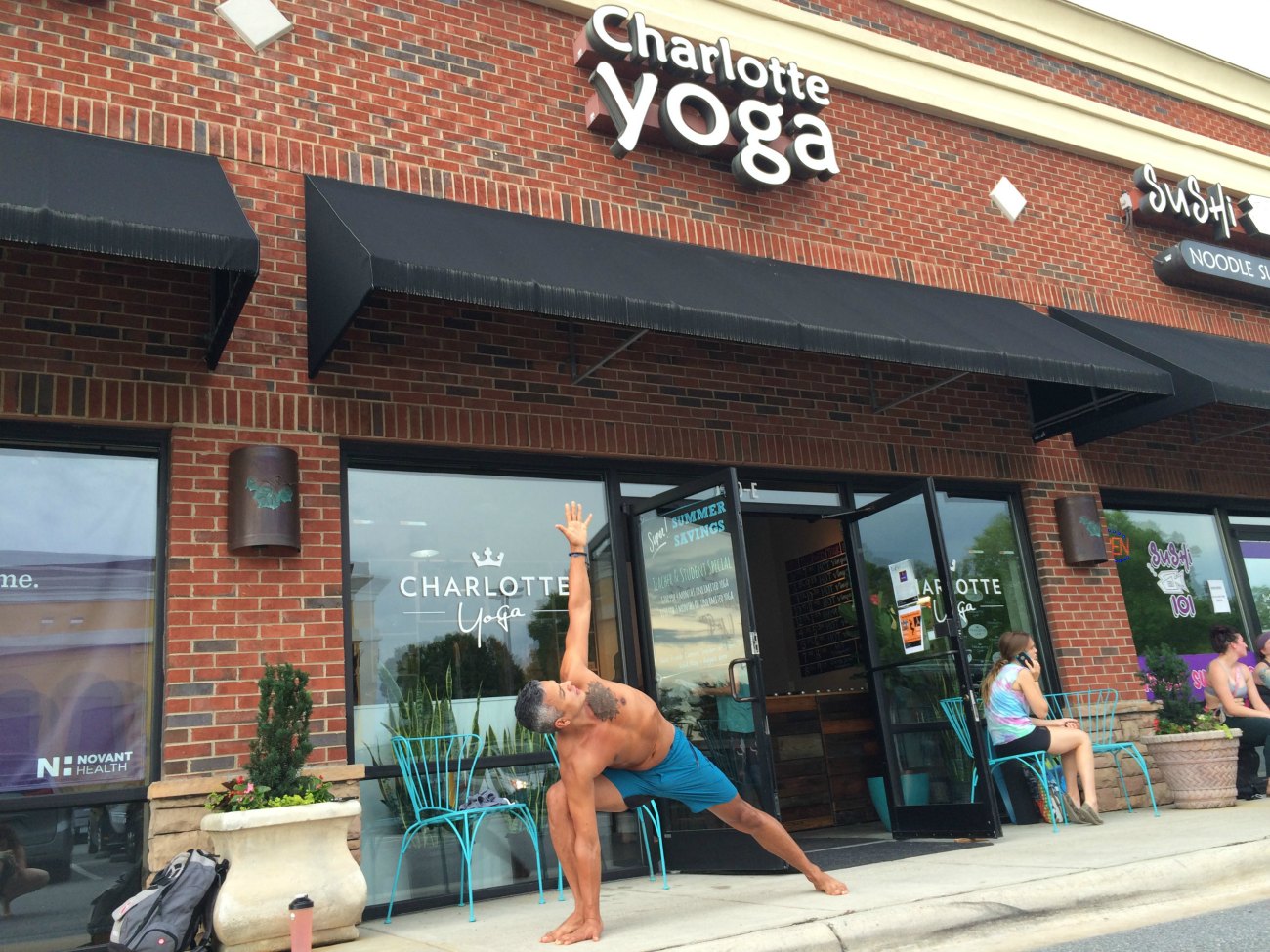 Acclaimed artist Edwin Gil completed his 365th consecutive day of yoga Tuesday night in a packed out studio full of friends and supporters at Charlotte Yoga. But that’s not really where the story starts.

Thanks @yogawithgracemorales beautiful class thanks for bring me home and teach me to breath, thanks to everyone for be part of this journey. Discipline is the bridge between goals and accomplishment. #JimRohn. A year ago, I dreamed of a challenge called #365DaysYoga, a challenge that changed a lot of things in my life, a challenge that is coming to end, a challenge that has been a rebirth of my soul on a new journey in my life. Thanks to all the amazing people that have supported me during these last 365 Days of Yoga. Please join me on my final week and be ready for the big celebration at Charlotte Yoga on June 13th at 6:30 pm. #newbeginning #Change #NewHome #magicishappening Day 363 of my personal goal of #365DaysYoga June 6 2015 #Manduka Manduka, #JoeVanGogh Joe Van Gogh #BlueRestaurant Blue Restaurant & Bar , Om Spa Chiropractic & Wellness , #LunasLivingKitchen Luna’s Living Kitchen, #BotanicaLights Botanica Christmas Lights OMB Yoga on Tap and Charlotte Yoga are, so far, the sponsors of the big celebration of the 30 Day Challenge. There are going to be raffles for the people that join my last 30 day challenge of #365DaysYoga. #TTwithGraceMorales supporting @kinoyoga @beachyogagirl @shaktiactivewear @yogageekandy #challenge #yoga #Motivational #Namaste #GilArt #UpcyclingLife #Balance #goal #Stopdropandyoga #YogafeedsAmerica #100happydays #Mysoreasana #Motivational #Encourage @Yula04 #Artyora #ArtYoragils @mandukayoga @omspacharlotte #BlueRestaurant @joevangogh @charlotteyoga #NamastyCYLove @omb #LunaslivingKitchen #BotanicaChristmasLights

Edwin moved to Charlotte 15 years ago to save his life. The Colombia native faced unsurmountable obstacles growing up in a poor family. Later as an adult he watched in horror when his life partner was murdered in front of him in the streets by members of FARC, one of the wealthiest and most powerful rebel guerilla armies in the world. Edwin himself was kidnapped and two attempts were made at his life before he decided to flee to the United States, completely broke (and broken) and unable to speak English.

You wouldn’t know it talking to him today that a person so gentle and kind could have experienced such destruction, but that’s the thing about Edwin–his is a story of the resilient nature of the human spirit and the transformative power of passion.

Edwin’s passion is art and he quickly made a name for himself and his craft thanks to a lucky introduction to Paul Thompson, owner of Charlotte’s first fine art gallery Coffey & Thompson. Thompson took a chance on the unknown artist from Colombia, giving him a coveted gallery opening that took the Charlotte art scene by storm. Sales were through the roof and Edwin had found his footing.

Edwin’s trademark artwork turns pieces of recycled broken glass into beautifully intricate murals–a metaphor for his ability to turn the pieces of a shattered life into something equally as inspiring. Two of his upcycled glass murals dominate the entryway at Charlotte Yoga, a space that became Edwin’s home 14 years ago when he was lost and reminded him to breathe when he didn’t want to face another day. A year ago he suffered a stroke and, at the urging of his doctor, decided for the second time to make a choice to save his own life.

Edwin committed to practicing yoga every single day, a decision that had profound effects not only on his mind and body but on the greater Charlotte Yoga community at large. Edwin’s personal year-long yoga challenge sparked dedicated 30- and 60-day challenges for fellow yogis, many of whom were in the room for his emotional 365th day of class, taught by his teacher Grace Morales.

The end of Edwin’s 365-day challenge is, of course, only the beginning. I asked him what he had in store for day one of his new journey and if we could meet up to chat and his response, not surprisingly, was: “I’ll be at the 8:15 class.” 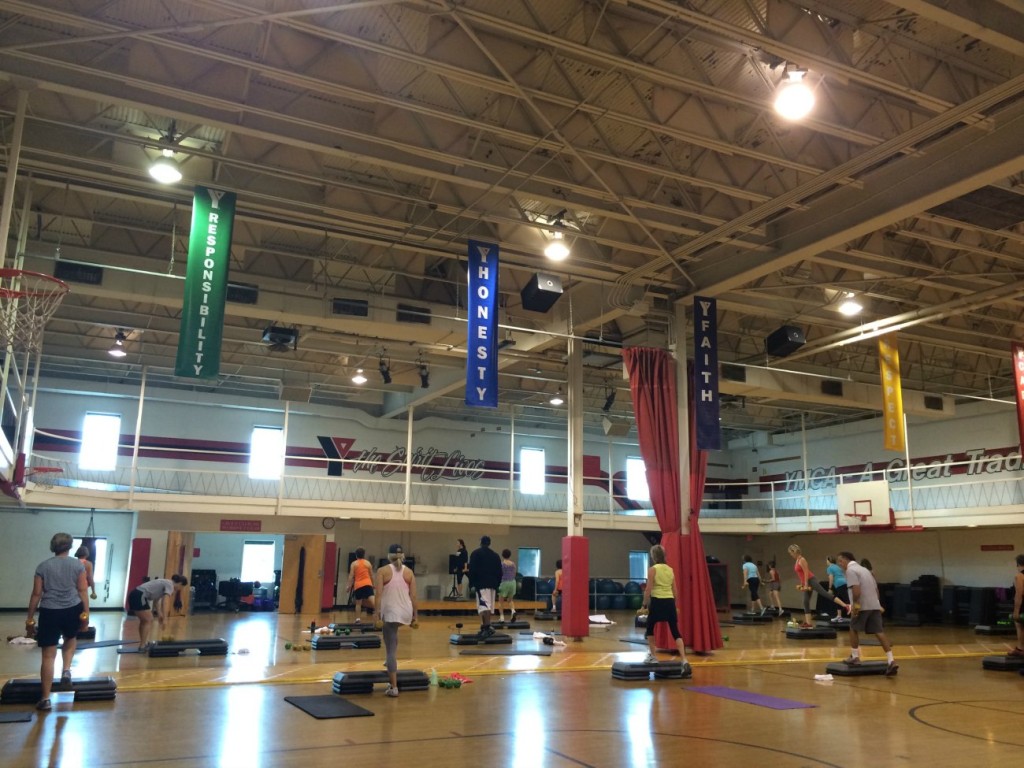