How I landed the job: Head of Narrative & Partnerships, Lowe’s Innovation Labs 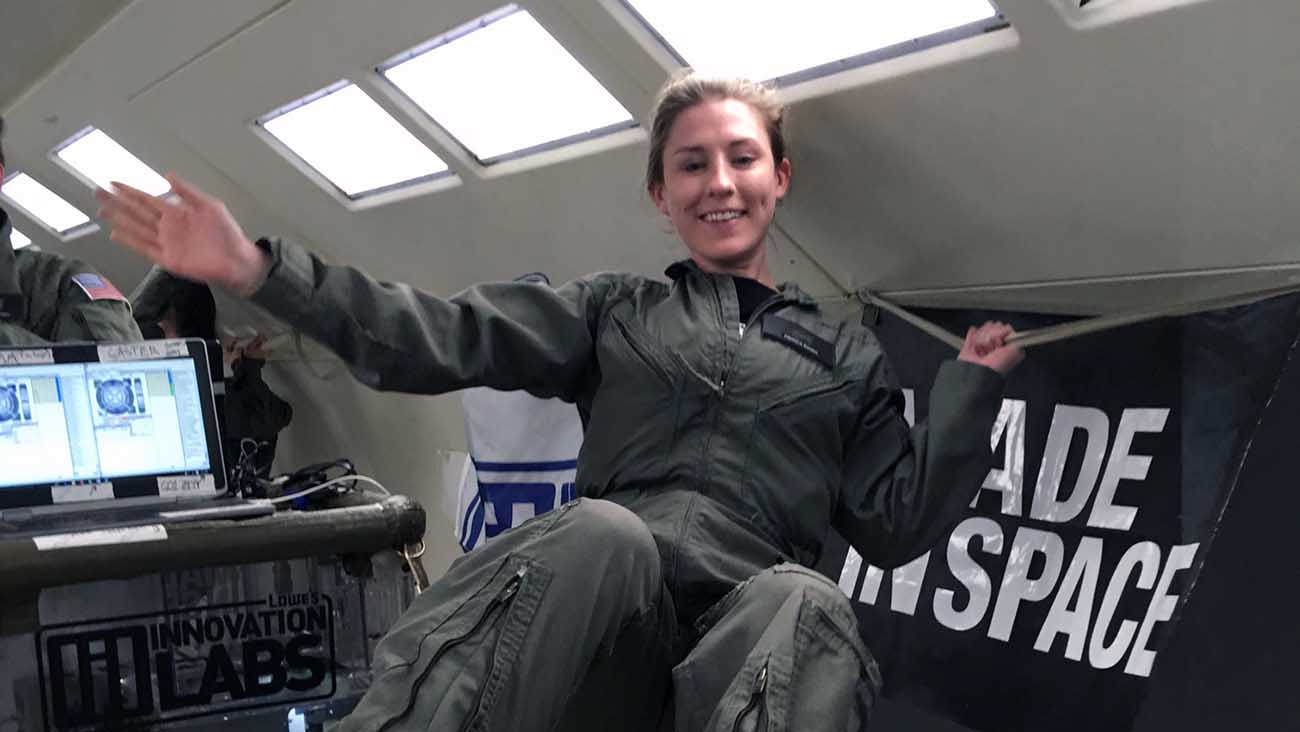 This story is part of a new series on “How I landed the job,” going step-by-step through job changes and negotiations at some of Charlotte’s best places to work. To be considered for a story, please email cristina@charlotteagenda.com.

I brought to Lowe’s some of the pro-active experience I’ve had in the rest of my career, which is how I got involved with the Innovation Labs team. Communication around innovation was one of my areas of expertise, and I heard we were launching this hologram room and that ended up being the Lowe’s Holoroom, the first project we announced. 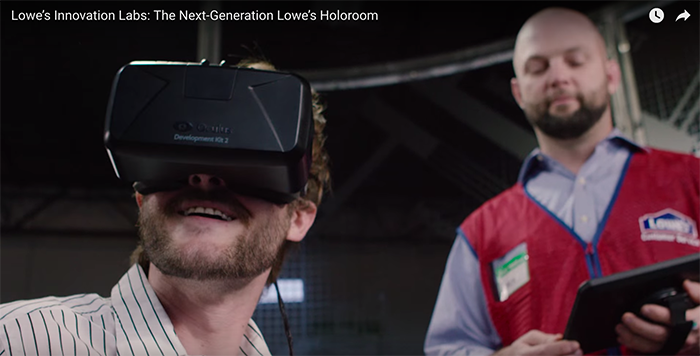 I did all the PR work to support the launch and lab and had a ton of success getting awareness for Lowe’s as an innovator.

“We had the element of surprise – no one was expecting that from Lowe’s.”

Then we had OSHbot on the Today show talking to Al Roker, lots of things like that. Innovation Labs were using technology to make real world impact. I thought it would be a good opportunity to do something broader than the communications I’ve done all of my career. On the product development side, I built a strong relationship with Kyle Nel who runs the lab and came over to be a full time innovation manager, overseeing narrative process.

We would take ideas of the future and turn them into comic books, artifacts. Complete with illustrations, characters, conflict and resolution. 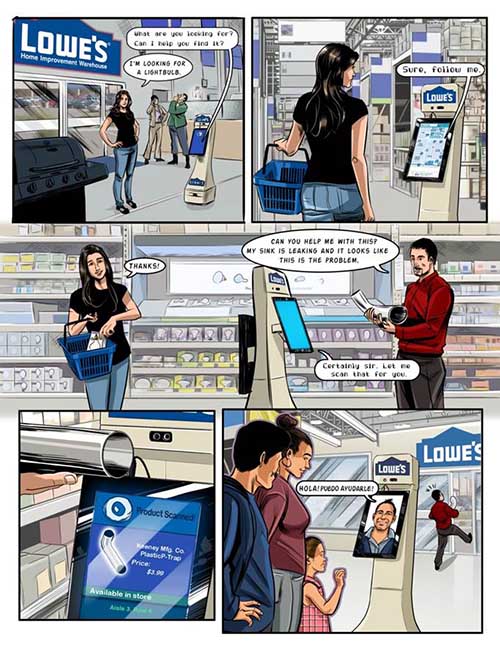 The comic book is a strategic roadmap to work backward and find technology and partners to bring those visions to life. The Holoroom came from a comic book about a couple who purchases a home and has a difficult renovation. They go to Lowe’s and can redesign before they spend any money.

“That comic book was presented to the executive team, and they all said, ‘If we don’t build this, someone else will. Why don’t you go try it out?'”

That’s how the lab got started.

We’ve come a long way in the past two years. I joined full time a year and a half ago and now I’m one of two directors here in Mooresville responsible for the narrative process and uncommon partnerships – nurturing partnerships with external partners. Big companies, small startups… we figure out how to work together in new and unexpected ways.

We also have a lab in Seattle and in Bangalore, a startup accelerator. I get to travel and work on things I never thought would be possible.

How do startups and other companies get involved with Innovation Labs?

We have long-term visions for the future on how we think technology really impacts people. From what I can share externally, you can get a sense for what some of these are – our OSHbot project, for example, is the first autonomous retail service robot, helping people navigate our stores more effectively. If you only shop at Lowe’s or a home improvement store once or twice a year, it can be overwhelming to find your way through it. 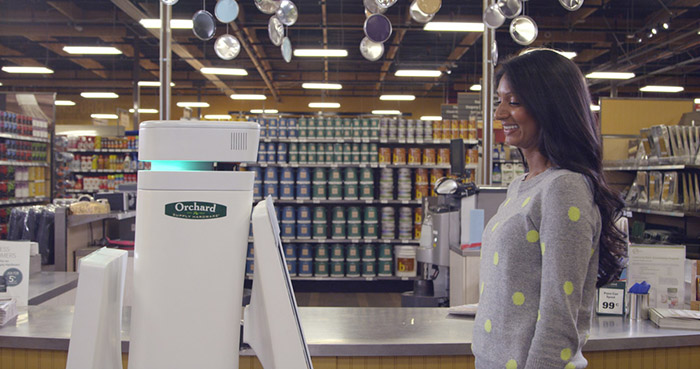 OSHbot is a robot you can talk to it, tell it what you’re looking for. It knows where everything is and speaks different languages. So it’s not about, robots are cool. It’s a solution to the store being hard to navigate.

My advice to other startups would be – think about a company like Lowe’s and problems we face, and how your technology can help solve those problems. It’s not just what’s trendy but what’s useful.

So what’s the deal with the space photo?

That’s me during a zero-g NASA research flight with Made in Space, to test our recycler technology. We announced the terrestrial version of this tech at the White House earlier this summer. 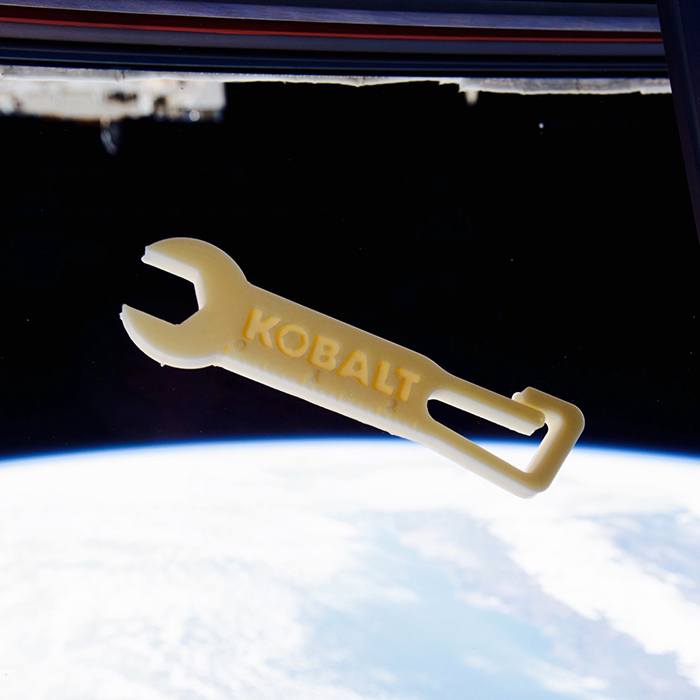 What has surprised you most about working for Lowe’s?

Aside from the innovation, one thing I was not expecting is how much the teams collaborate internally and how much opportunity there is to build skills and pursue other career paths within the company.

Another really important thing is networking within Lowe’s. It’s a really big place, here in Mooresville. Just as much as it’s important to network out there, once you get here it’s important to build relationships that make your projects more successful. Then you can also understand what paths you might want to pursue.

What tough decisions have you made along the way?

Every time I’ve decided to change jobs, it’s always a touch choice because you never know how it will turn out.

Always think about, what is making you excited to go to work in the morning? Pursue those things even if you don’t know how it will become a career path. Because I pursued the things I was passionate about, the career choices have made sense even when I wasn’t sure how it would turn out beforehand.

What’s one of your favorite things about your current role?

My favorite thing doesn’t apply to everyone who works for Lowe’s, but I’ve had the chance to travel the country and world. I went to seven different countries last year, and I wouldn’t be able to replicate that anywhere else. That’s been meaningful to me. And here, well, we do have an absolutely beautiful campus.

Apply to be a part of the Innovation Labs team here, and search other Lowe’s careers here. 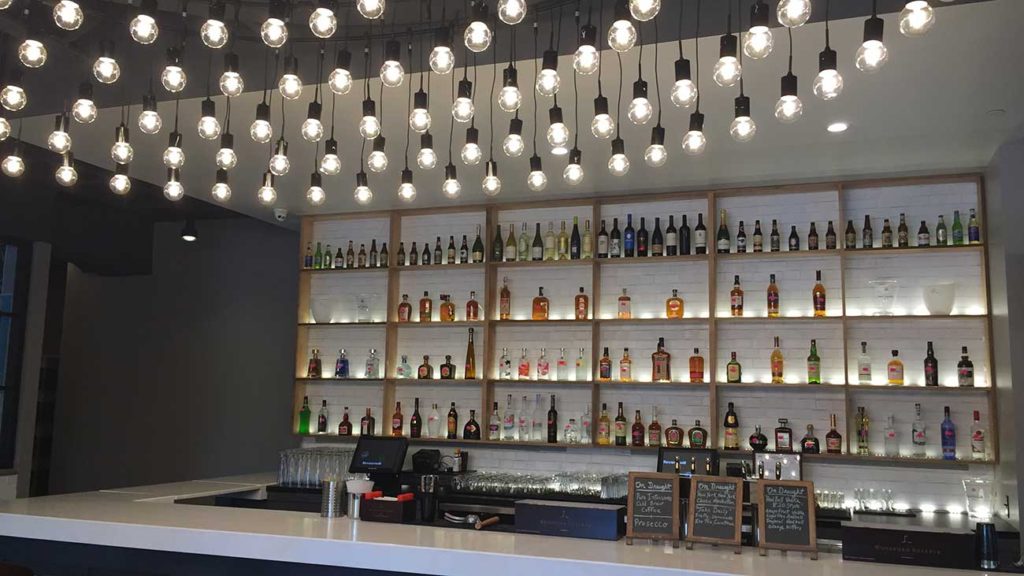 FIRST LOOK: 8.2.0 is bringing a massive and remarkable indoor experience to the Music Factory