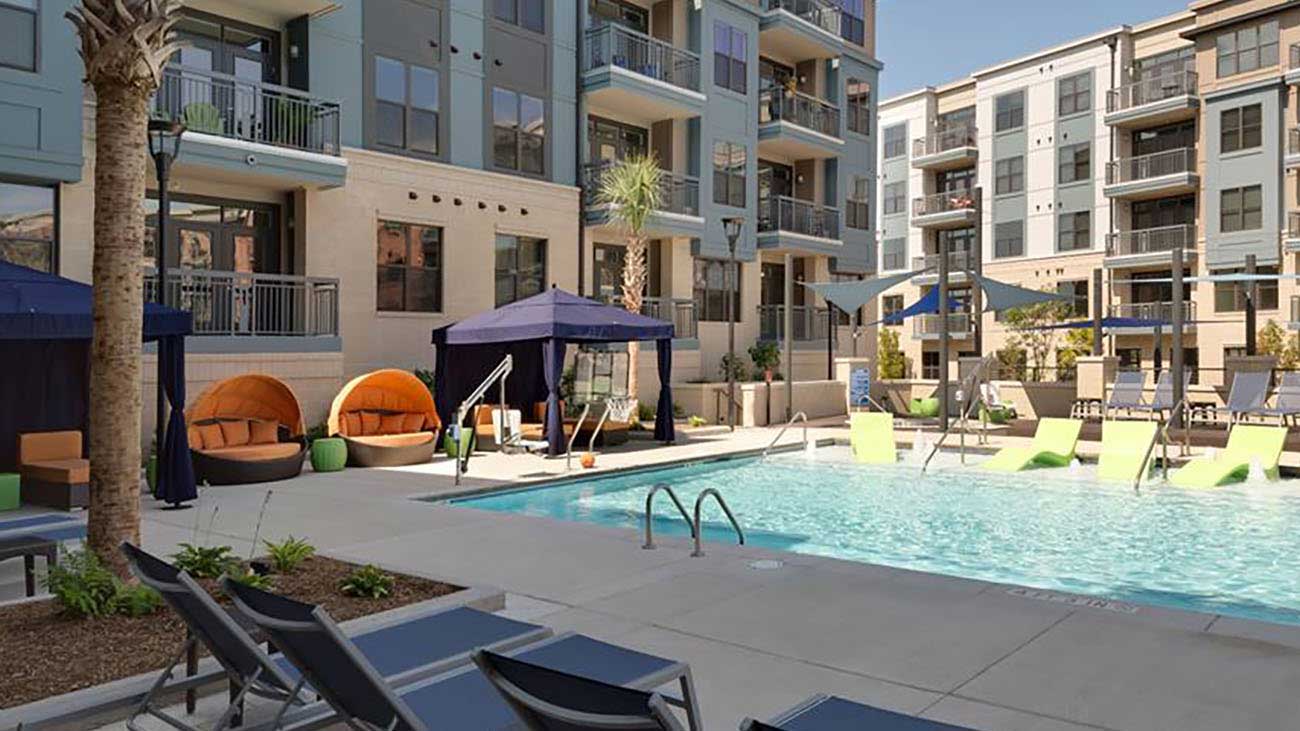 There’s a direct correlation of temperature to amount of time spent at the pool.

The dog days of summer showed up about a month and a half early this year, and with temperatures hovering in the high 90s, people are running in packs to cool off while looking cool. Especially the pools at apartment complexes all over the city, because with their salt water, cabanas, lounge chairs and gas grills, why wouldn’t they? 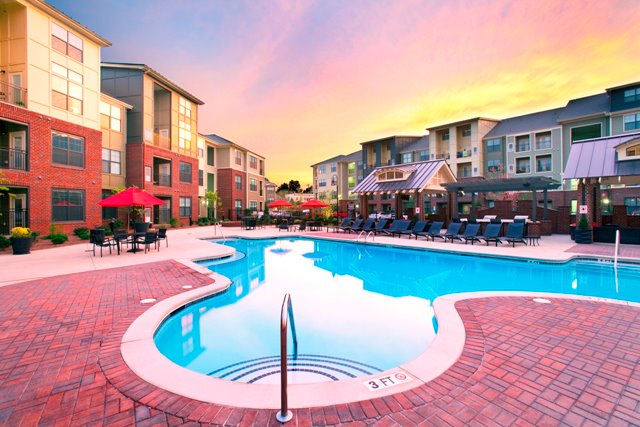 And with pools come pool parties – unless your host is living in a complex with a guest policy.

These policies are becoming increasingly common at complexes throughout the city and vary in type, but are the best way to control the size of the crowd that gathers and to ensure that residents can’t get pushed out due to visitors that don’t belong there in the first place. Most complexes limit the number of guests a resident can bring to the pool area to two per resident or, in some cases, two per apartment.

Not every apartment is strict when it comes to number of guests allowed per apartment or resident; in fact, some don’t have policies at all.

When I spoke with a representative at Loft One 35, she stated that the company trusts their residents to be adults, but did say that if it was needed, a wristband policy would be looked into.

The Vyne on Central looks at the situation the same way.

“There’s no rule on how many people can be at the pool, just because it’s a small community,” an employee explained. “There are only 98 apartments, so we don’t have a ton of traffic at the pool. If we ever felt like it was an issue, we would probably look into it. But the amount of traffic just doesn’t call for a rule.” 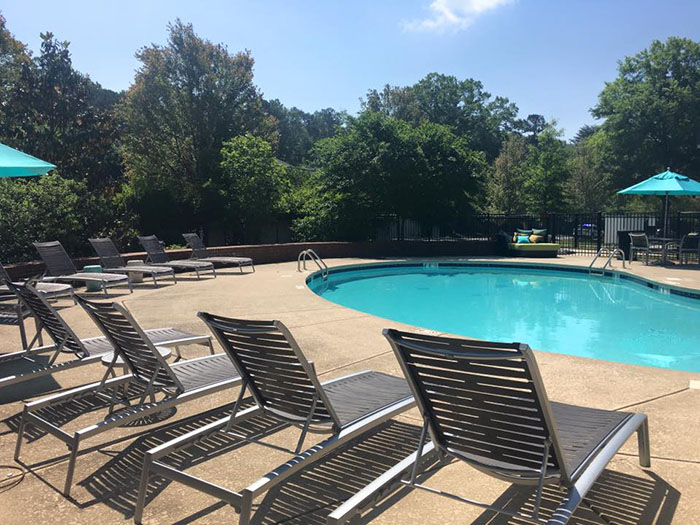 “They expect us to be responsible adults and respectful, although the office staff is extremely present in the immediate area,” a Vyne resident said. “If you were to have a major gathering at the pool, they would take notice of the very low resident count, as they’re very familiar of who the residents are.”

Some communities, while they have a policy, don’t truly have a way to enforce it.

At Midtown 205, for instance, whose policy is two guests per resident, the leasing office won’t know if you’ve brought more than two guests poolside. But in hopes that it will keep the guest count down, they do actively tow visitors without a parking pass, which can be found in the leasing office.

1100 South is in the same boat, with a two guest per resident restriction, but no wristband policy.

“We don’t have any wristband policies right now, but because it’s pool season, the owners are looking into one,” an employee of the complex told me.

Amenity decks, like the one at Skyhouse, are poised to be in huge demand this summer, and the buildings are aware of it, but may not know how to handle it when they’re not sure what to expect. Skyhouse has placed a two guest per resident rule on the tenants as well.

“It’s the first pool season we’ve experienced,” a representative said. “So we might be looking into getting wristbands for guests so we can keep an eye on it. Our pool deck isn’t massive.”

But other policies are strict and rely on the wristband method to keep things in check.

Camden Gallery, the newest spot on Camden Road in South End, gives each resident a wristband and allows two guests per apartment rather than resident in the pool area. It’s been said that Presley, who declined to comment for this article, operates this way as well. 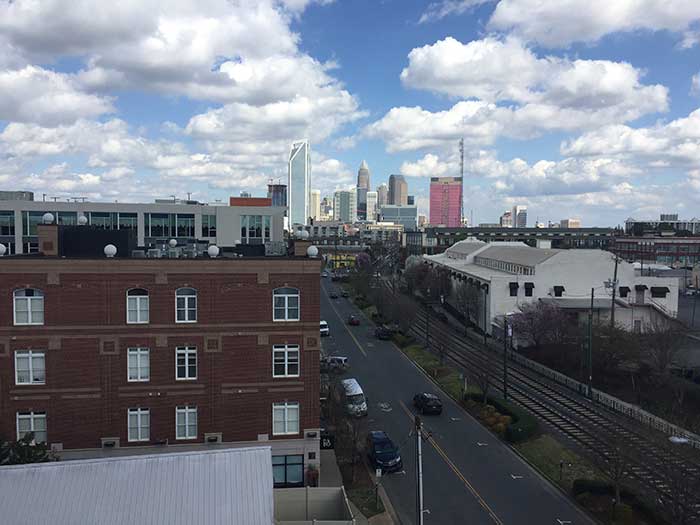 But some apartment complexes go a few steps further, limiting wristband availability and bringing in security.

Popular communities in South End, like Fountains, do it this way. Residents are allowed two guests each and those without wristbands are asked to leave.

The Element apartments, directly next to Romare Bearden, have a strict set of rules that tenants are expected to abide by and an even more strict way of enforcing them – and didn’t tell residents about it until recently.

“Each resident gets a blue wristband, and each unit gets two white guest wristbands,” a resident told me. “So residents, in essence, who live alone are allowed more guests than residents who have roommates. This rule came into effect several months into my lease agreement. The leasing office sent a mass e-mail to residents informing them of the new rule with little to no explanation as to why.”

“We allow up to two guests per apartment,” a leasing agent told me. “Guests can get wristbands as long as the leasing center is open. If a resident wants to have more than two guests, they can rent a cabana.”

Renting a cabana isn’t cheap at $75 per day, but it does give residents the option to invite up to five more guests.

And how do they keep that in check? With the use of a “pool monitor.”

“We have a pool monitor that’s here on Saturdays and Sundays to monitor that residents are wearing their bands,” she continued. “And bands are $100 per replacement.”

“This has been pretty strictly enforced from what I’ve seen,” the resident stated.

With the ever-steady increase in rents (Charlotte is now the 21st most-expensive city to rent in in the nation, up 6.5% from last year), do residents find it fair to have these rules enforced? I expected to hear only negative things about these policies from residents of the buildings – and I did at first.

“My primary thoughts on it is that it’s restrictive, falsely elitist and gives a B.S. sense of exclusivity,” a source told me.

Other renters echo these sentiments.

“Had I known about it when looking for an apartment last year, I may have reconsidered signing with Element, as I don’t want to be restricted to how many of my friends I can have over to enjoy the amenities I essentially pay $2,000 per month to use,” a resident of Element explained.

“I personally feel like I pay more than enough in rent already and having to pay an additional $75 for my guests to use the pool just seems ridiculous, especially since the same rules don’t apply to any other amenity at Element,” she continued. “I had not seen the pool over capacity by any means before these new rules were put in place, so honestly, I don’t see why this policy is necessary.” But the biggest problem with these policies seems to be the lack of flexibility.

“Say I have my parents and two sisters come to town,” a resident of a South End apartment started. “We can’t hang out at the pool because my family can’t all have a wristband? I think the complexes need to have extenuating circumstances. Beyond that, a lot of complexes have their grills at the pool – and the pool only. So if I want to grill out with a bunch of friends, they all have to look on from the windows? Come on.”

But there was a lot of support for these rules, too.

“I definitely see where the apartments are coming from. It’s crowd control,” one resident, who wished for his complex to not be named, said. “They don’t want their residents, who are paying ridiculous rent, to be shut out of their own pool because someone else brought 19,074 guests, you know? But at the same time, other places like Element are just going overboard with the security checking so many people and such.”

Residents of smaller complexes also support the rules; with small complexes come small pools and limited seating, and the rules keep it fair. 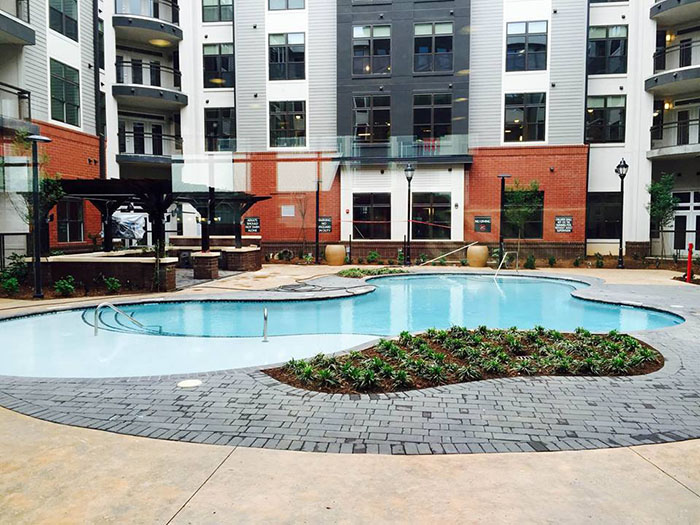 When I spoke with a woman that’s renting at Fountains, she said that the rules have her full backing.

“I pay a ton of money, and honestly like the rule to keep others out. I know how the people don’t live at my complex,” she said. “It bugs me when I can’t relax knowing this. I’m all for fun, but South End is not for college complexes, you know?”

Some residents aren’t sure where they stand.

One renter said that his “less ‘fight the man'” side agrees with the rules, because he’s not going to pay $1,400 in rent for someone with 15 friends that aren’t residents to take all of the chairs.

“I definitely see both sides and I don’t really know what the answer is. My main thought comes down to this,” he explained. “We are trying to live in a society, but unfortunately people are people and there will always be a select group of morons who ruin everything for everyone else. The same thing applies here; 90% of residents will be respectful, but there’s always the 10% of brotastic morons who ruin it for everyone.”

So no matter where you stand, make sure you check the policy before you sign the lease. 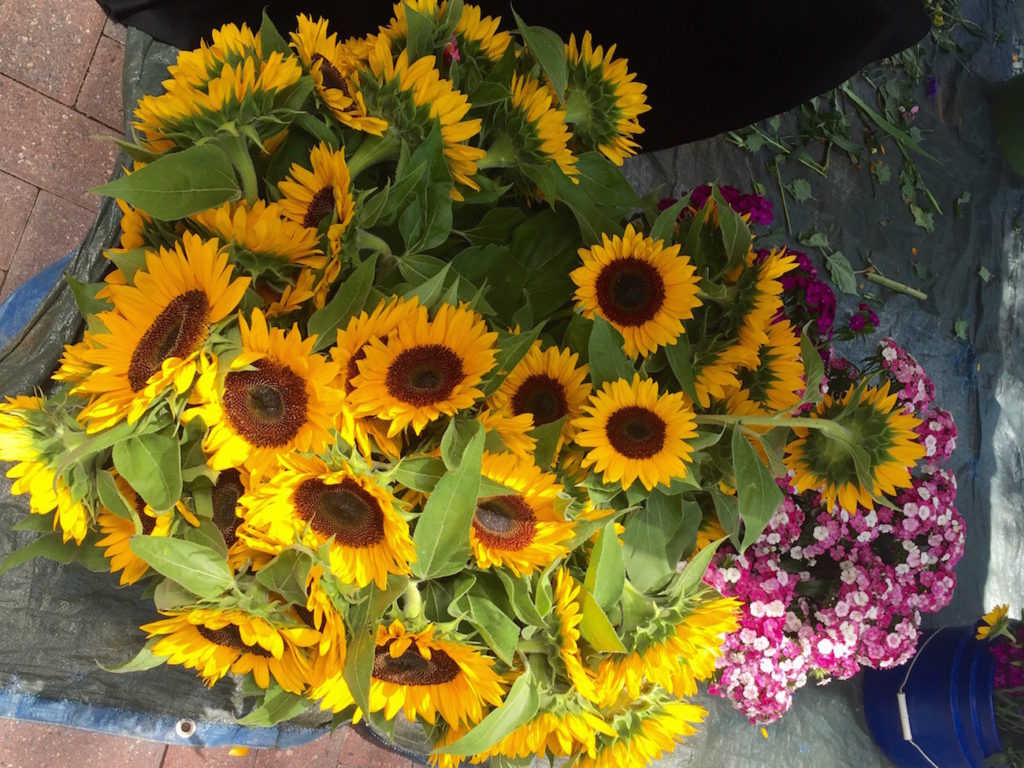