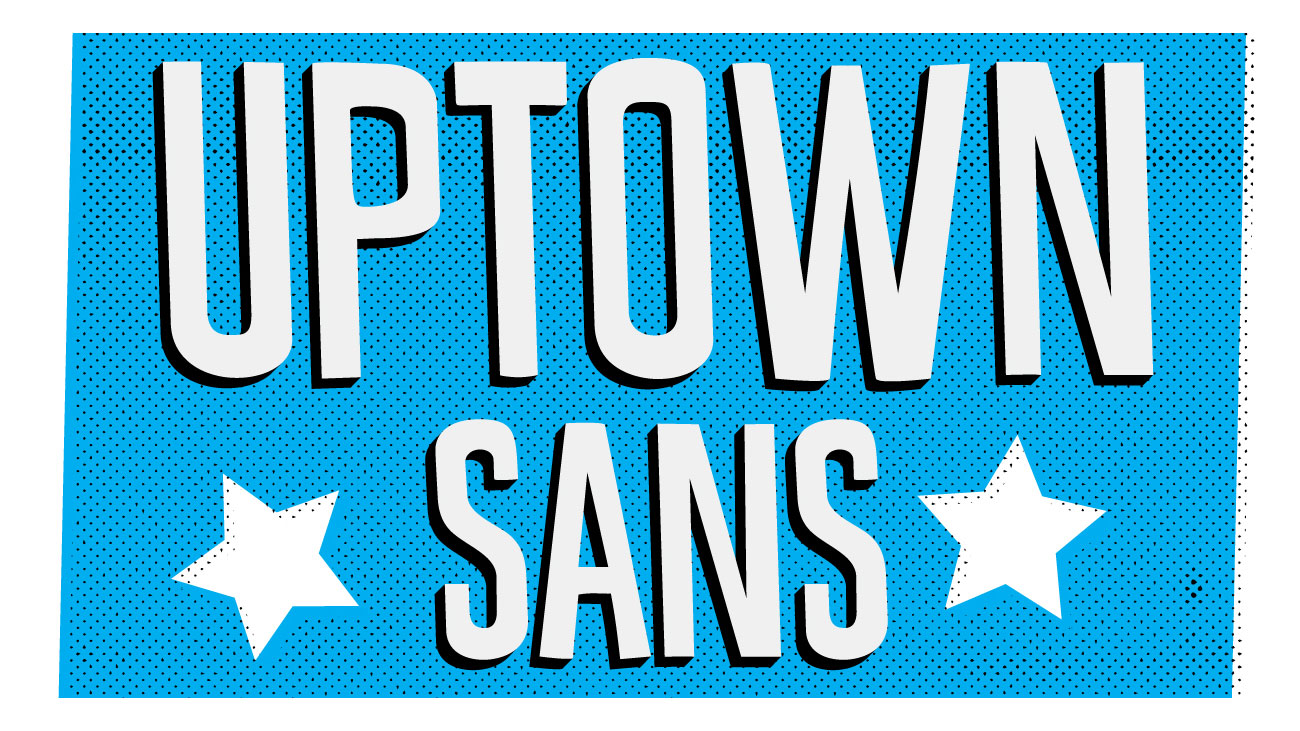 Guys, Charlotte just got some serious street cred. Sure, we have pro sports teams. Yeah, we have awesome music venues. But now we are officially cool: We have our very own typeface.

Josh Mauldin, a local designer, has just released his new typeface, Uptown Sans. He describes it as “weird and happy” and gives 100% credit to the city of Charlotte for his inspiration. I spoke with Josh about his new typeface and here’s what he had to say: 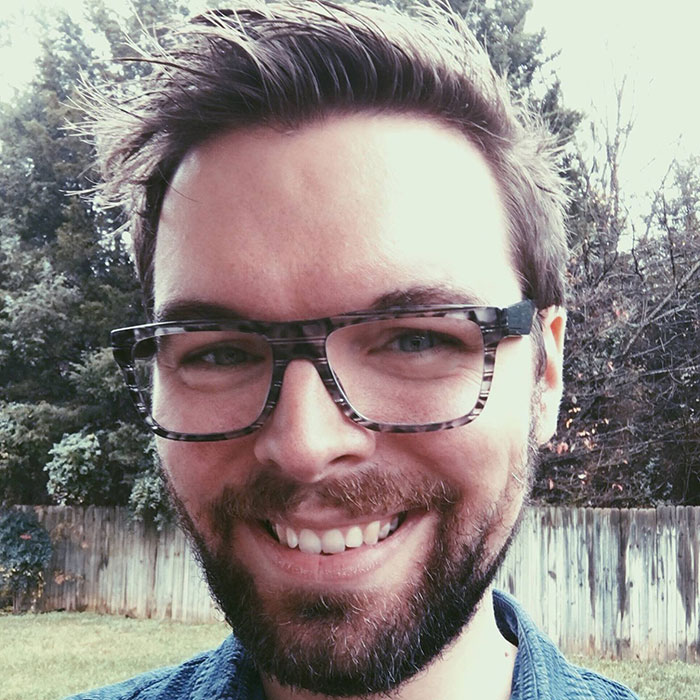 Me: Why did you name this typeface after Charlotte? 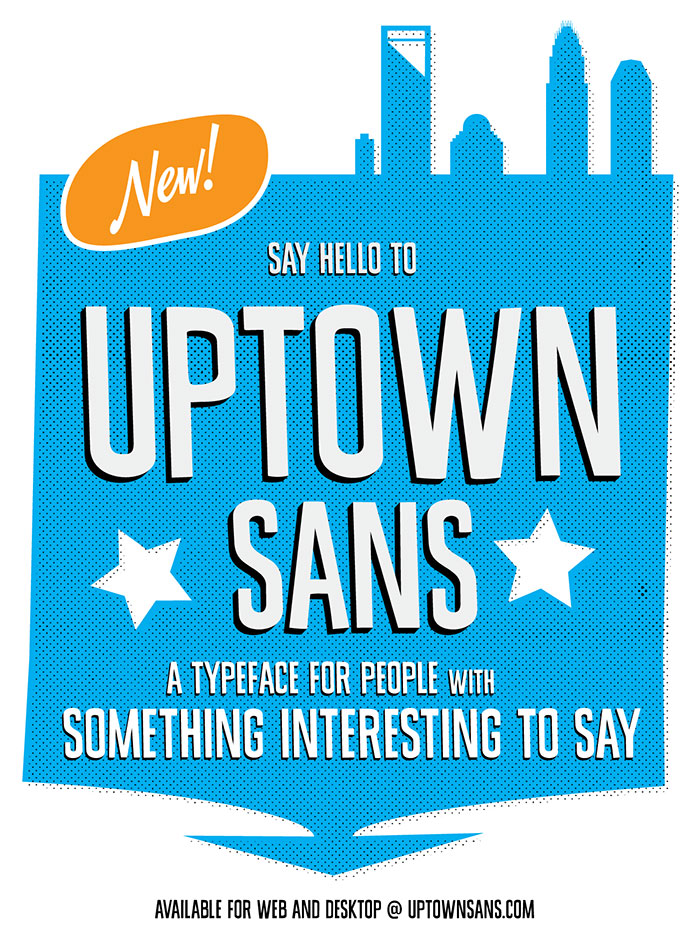 Josh: Charlotte provided a ton of inspiration, which is why I named Uptown Sans in honor of it. The delightfully unusual vibes of places in NoDa and Plaza Midwood helped make this typeface the lovable weirdo it is.

Me: Do other cities have their own typeface?

Josh: Yes, Chattanooga has a typeface called Chatype. Sweden also recently did one of their own and it looks super nice.

Me: Is there a difference between typeface and font? I feel like I’ve been yelled at for using the wrong term before.

Me: Ok, so what made you decide to create a TYPEFACE?

Josh: I really wanted to explore an idea and see where it took me. I fell in love with typography ten years ago and realized how typography can shape the way that we feel about the world. I could make people feel happier when they read my words. I spent a lot of the last two years deeply exploring typefaces.

Some folks go out and party. I party by checking out typefaces.

Me: How long did it take you? 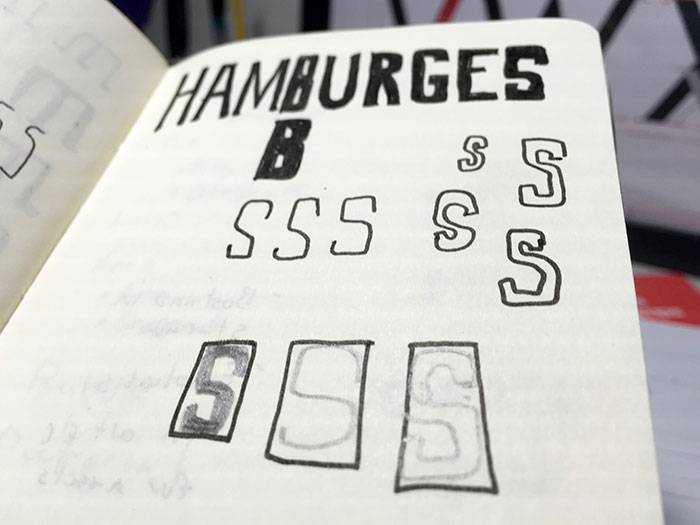 Josh: The process took me about a year. Early last year I started sketching a typeface and I didn’t end up going in that direction because I thought it was just too weird. So I ended up switching directions. Uptown Sans took me about 10 months.

Me: What was weird about the old typeface?

Josh: I didn’t think it would have any application other than my strange creative tendencies. Lord willing, it will never see the light of day.

Side note: It’s seeing the light of day. 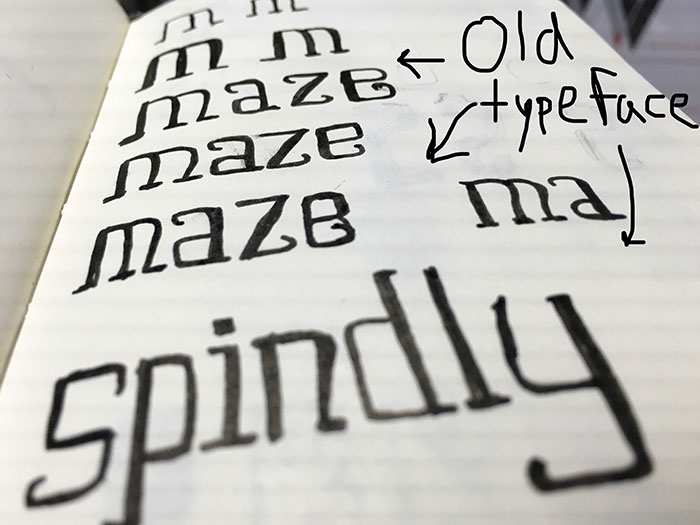 Me: How did you go about creating Uptown Sans?

Josh: I started with a series of sketches, but I’ve never been very strong at sketching so I immediately took photographs of my sketches and put them into Illustrator. I’ve done at least 1,000 tiny iterations of these letters.

Me: What letter was the hardest?

Josh: S. It was so enormously difficult; it was absurd. I probably did 20 variants of that letter. It was wearing the whole way. But hey, it’s finished! 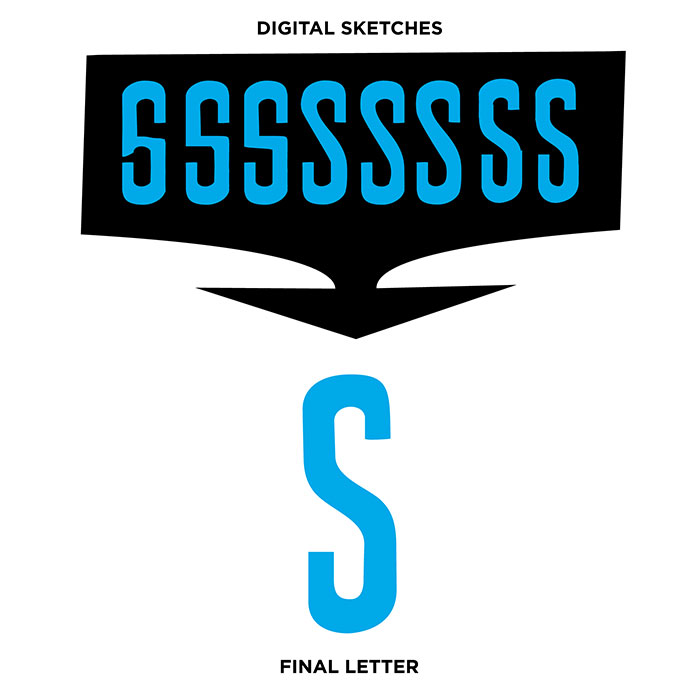 Side note: Here are the sad S’s that didn’t make it to prime time. 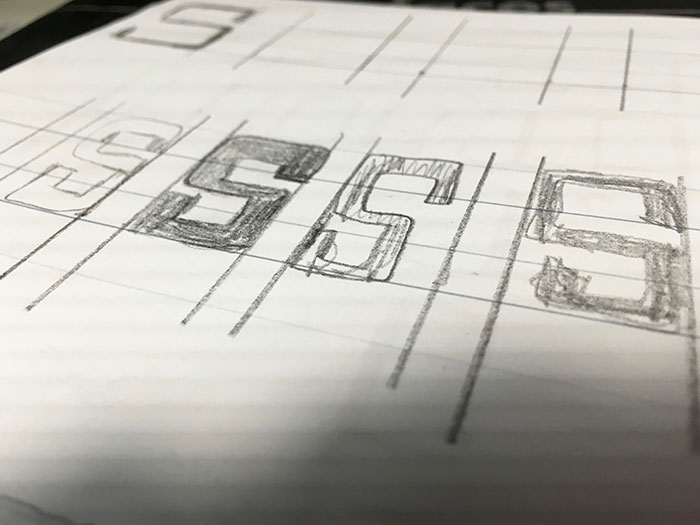 Me: Do you have to put every letter next to each other to see how they match-up? My brain can’t comprehend how you did this.

Josh: So, there are some letter pairs that you start with. The letter “A” will be paired with eight or nine uppercase letters and twelve or fifteen lowercase letters. So you have to do pairs for each letter. I probably have at least a couple hundred pairings.

Kerning (adjusting the space between letters) can be really tedious. If you want to find out how much you can hate yourself, you should definitely try kerning a font.

Me: How did you know you were finally done?

Josh: I’ve always thought that good design is invisible. It works really well when you can’t see it. A bad typeface is like wearing black and navy.

Me: I wear black and navy.

Me: Would you consider yourself a typeface-snob?

Josh: Yes. I have literally not gone to a business because they use Papyrus. I haven’t seen “Avatar” for that reason. I will not sit through a movie for three hours looking at yellow Papyrus. It’s not going to happen.

I know that people love to hate Comic Sans. But I think that it’s just misunderstood. I think Comic Sans is fine. It had a cool story, but Papyrus is awful. I once owned BanPapyrus.com. It always seems misused. It should be avoided unless, of course, you’re talking about Ancient Egyptians.

Me: What’s the story behind Comic Sans?

Josh: It was designed for Microsoft Office to go with the dog (a pre-cursor to Clippy). It was modeled after comic book lettering, and it was fun. Eventually it made it into Microsoft Office. After that it was used on very serious company memos and other places it didn’t belong. Now it’s constantly made fun of, but it was just used in the wrong way.

Me: If you were any typeface, what would you be?

Side note: This is my favorite game to play. If I were a typeface I would be Arial Rounded MT Bold because I’m not very stylish and loveably thick.

Andrew Dunn would be American Typewriter, Katie Levans would be Curlz MT and that girl you knew in high school that keeps trying to sell you weight-loss protein shakes on Facebook is Papyrus because she’s the worst.

Me: What company or group would be your dream client?

Josh: I thought a lot about food while I was making this typeface. So maybe a really dope food truck or taco place. Uptown Sans is a typeface for having lots of fun and maybe getting a little weird. It’s like Andy Dwyer weird. He’s still relatable, but he has his quirks. 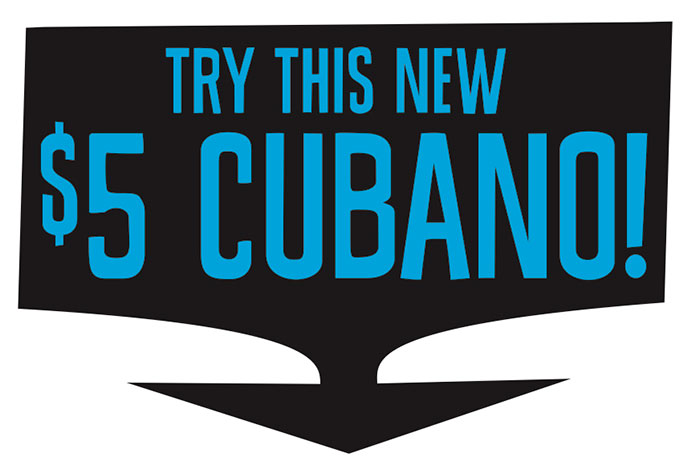 Me: How do people get Uptown Sans?

Josh: Right now, I’ve submitted it to a few places to see if they’ll carry it for me. Otherwise, people can buy it from Uptownsans.com. 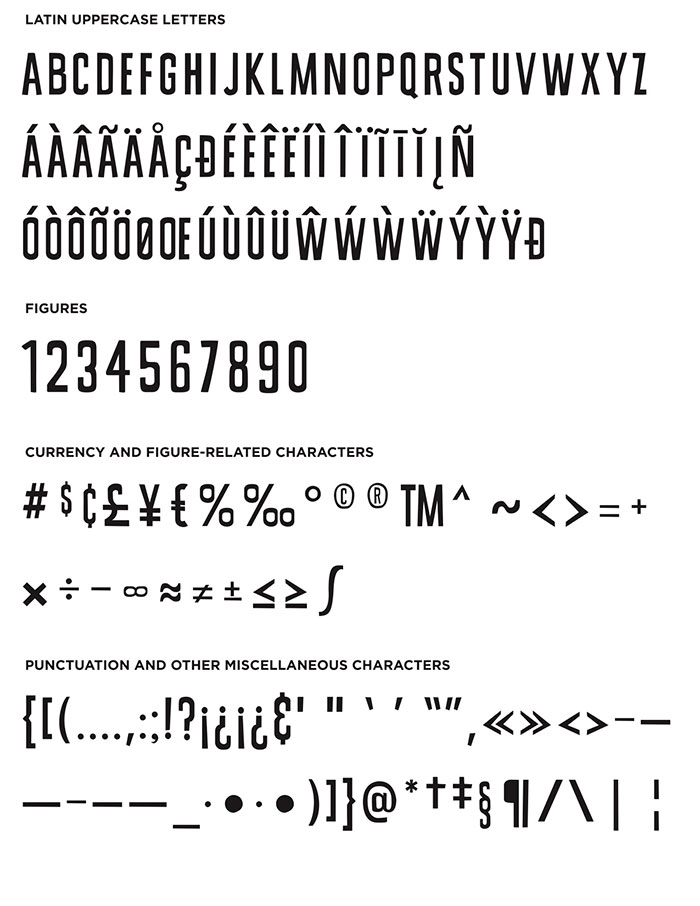 By the way, Josh didn’t just design the letters for Uptown Sans. Creating your own typeface means designing every letter, number and symbol on the keyboard (which sounds like a total nightmare). But even after a year of kerning-hell, he still says that he’s ready to start a new typeface. And, who knows? Maybe the next one will be inspired by the toll lanes on I-77. 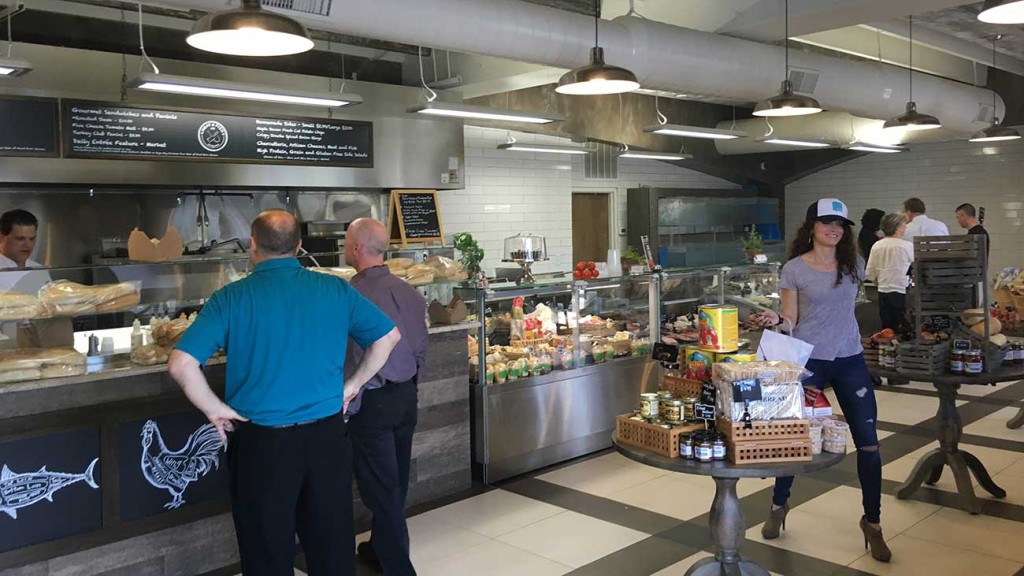 How to eat lunch at the new Meat & Fish Co. on Morehead