The revival of the NoDa Gallery Crawl 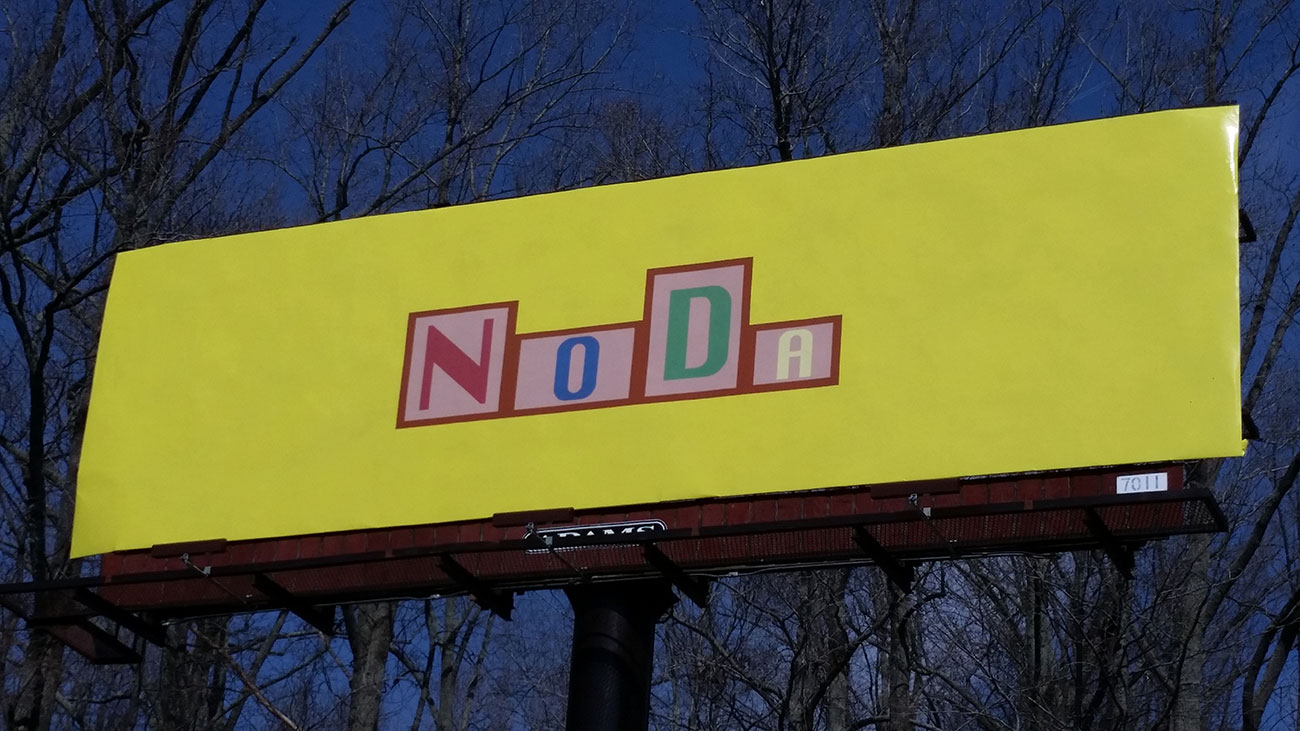 If you are a lover of the Charlotte art scene, last Friday was an exciting night.

First, The Company Store (which we’ve previewed in an earlier story) opened to a huge crowd and rave reviews on a gorgeous spring night in beautiful downtown NoDa. Throngs wandered through the former mill house, gathering on the back deck, relaxing at picnic tables scattered through the side and front yards and made their way through the comfortable, inviting rooms within the converted mill house. 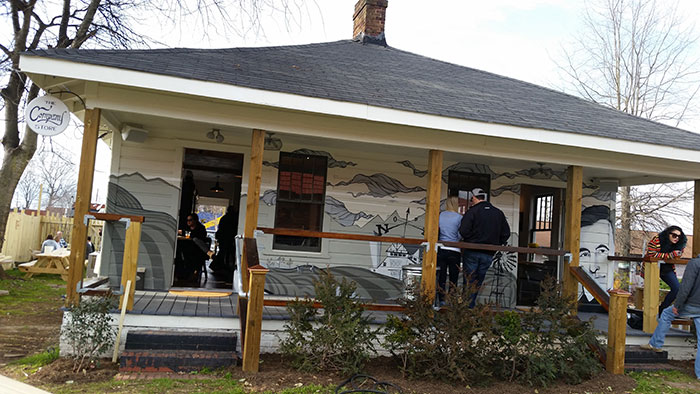 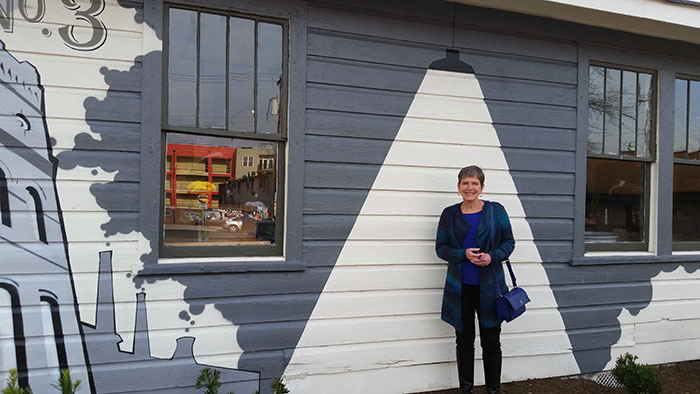 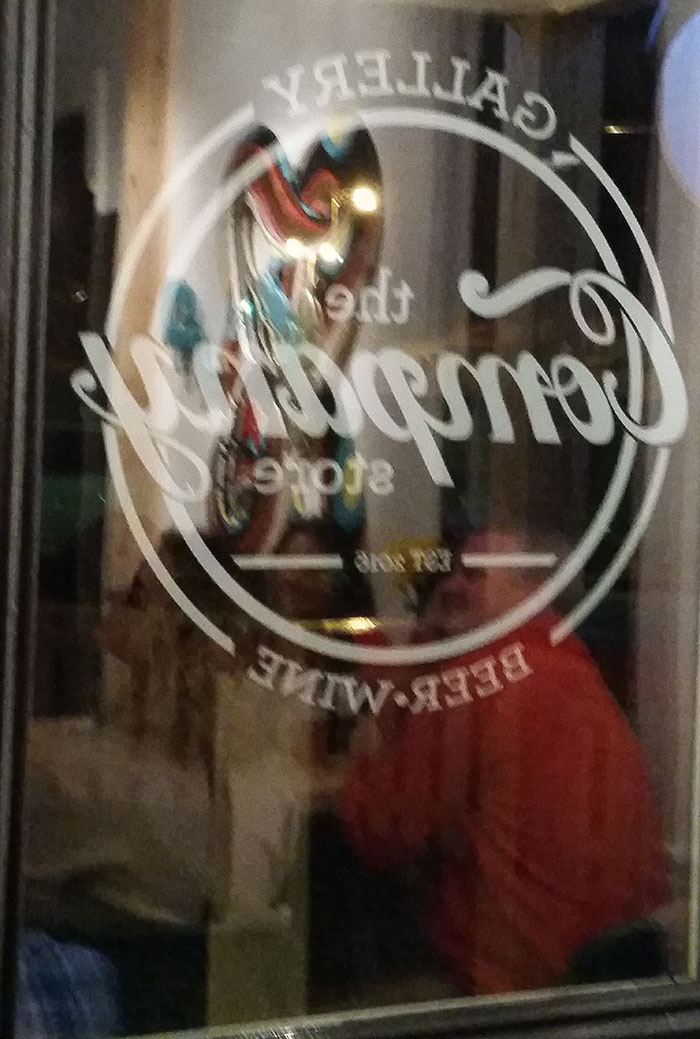 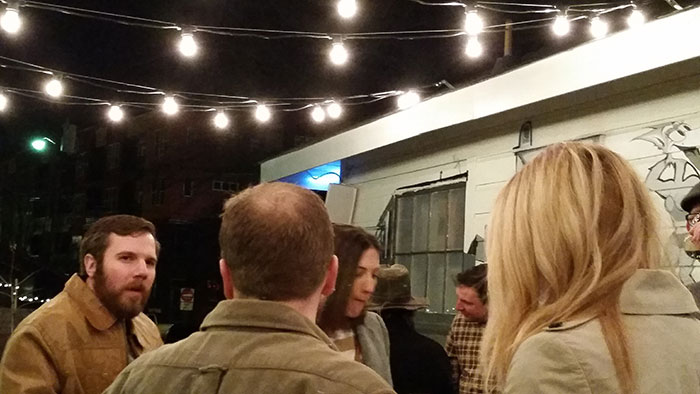 Inside the back door, the The Company Store even featured an old fashioned hand crank gumball machine – but a gumball machine vending gorp, M&Ms and pistachios in the shell. 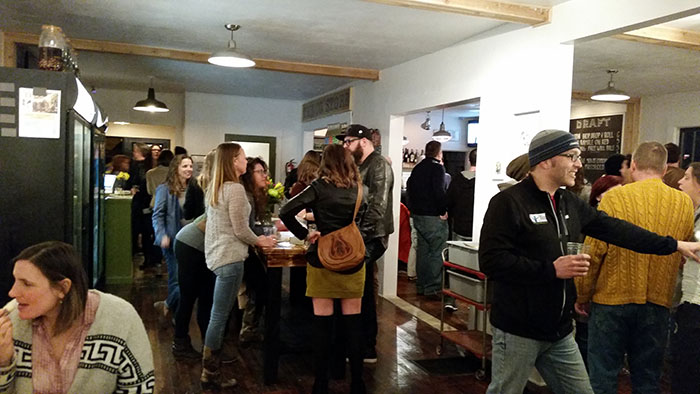 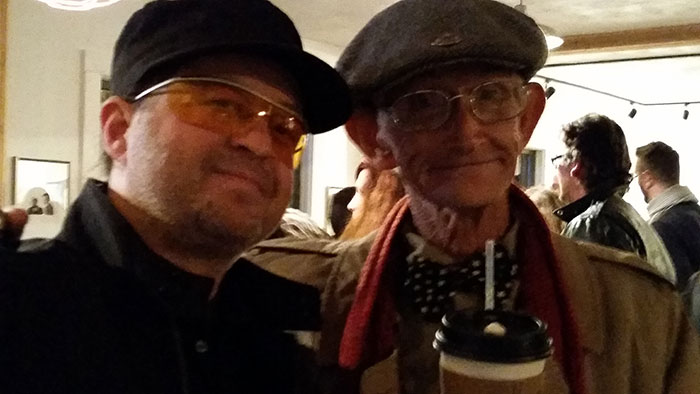 But simultaneously, something else was going on last Friday in The Company Store and in a few select venues throughout NoDa.

That something was a re-imagining of the famed NoDa Gallery Crawl. The former monthly event, which has fallen by the wayside in recent years, was re-established on March 4 (first Friday every month) by a few committed NoDa business owners, as well as a dedicated cadre of talented local visual artists.

As the customers of The Company Store made their way from the bar to tables and the welcoming porches, they passed by numerous paintings, drawings, and photography lining the walls.

I was struck by several things as I surveyed the art for sale. I noticed that the collection was extremely diverse, very unique and inviting for a novice like me.

Second, I noticed that all of the artwork was priced very affordably. And finally, I observed that about half of the pieces on display were already sold. I found this encouraging not only for the artists and the buyers, but also for the businesses like The Company Store who are working to revive the monthly gallery crawl.

The owners of The Company Store, Scott Linsley and Joey Hewell, directed me to a few other businesses in NoDa that were participating in the revived gallery crawl.

At Revolution Ale House, they displayed all the artwork in a waiting area just past the hostess stand inside the sprawling restaurant.

The art at Revolution was an eclectic mix of traditional paintings, mixed media and pottery. But the piece that caught my attention was a black, floor to ceiling knotted mass that was spellbinding.

I’m not sure what it was, but I’d love to have it in my home — if I had a much, much larger home. 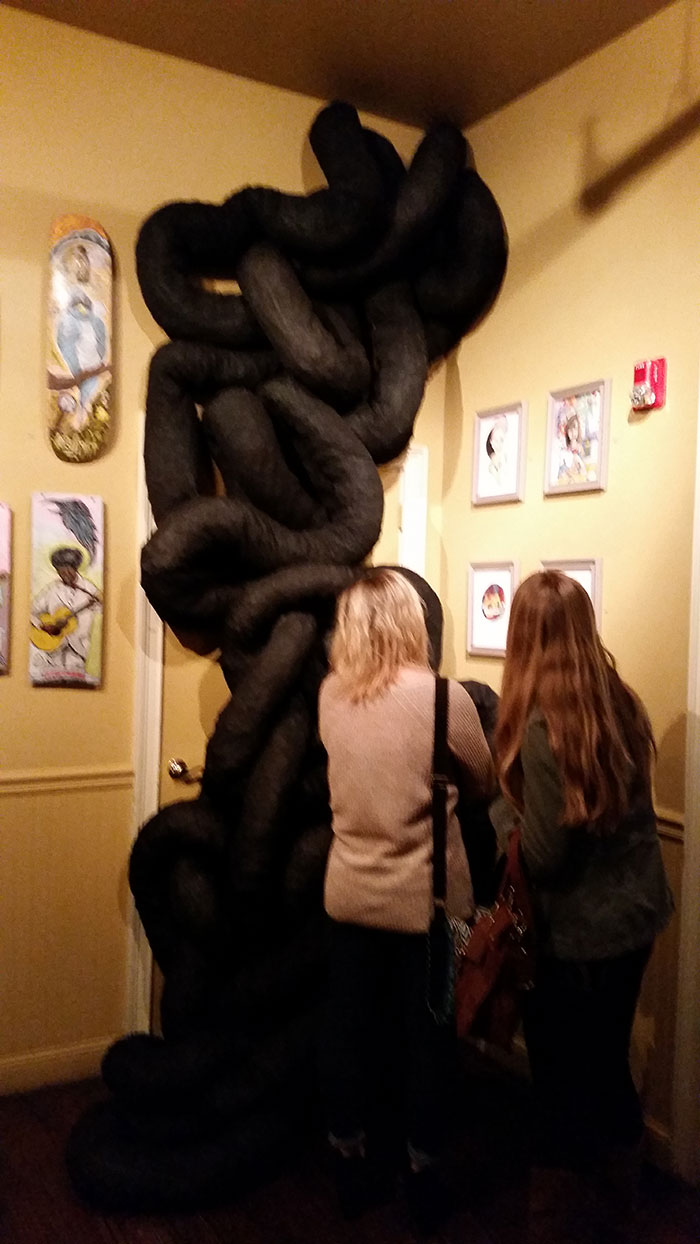 Moving down the street, we finished the evening at the Baku Gallery, which adjoins Fu’s Tattoos. While the previous two galleries featured an assortment of artists, Baku displayed an opening night of the art of Bruce S. Maxwell, entitled That Would be Me.

Mr. Maxwell’s work was intriguing and at times challenging – as good art should be. I found myself laughing along with some pieces, gazing longingly at others and being challenged intellectually by much of the exhibit. 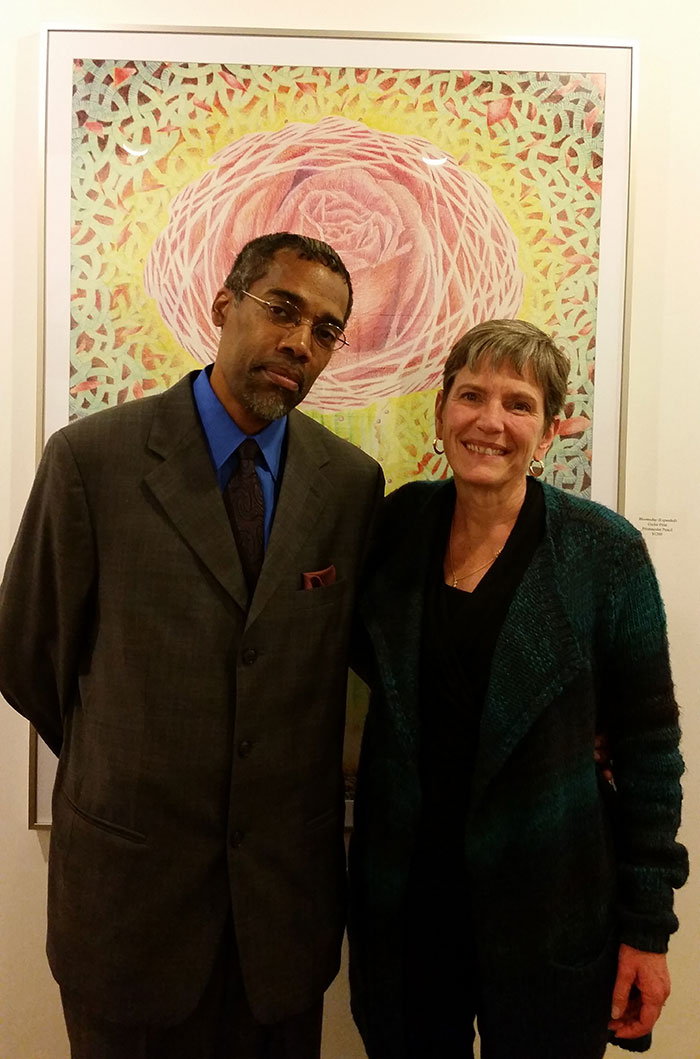 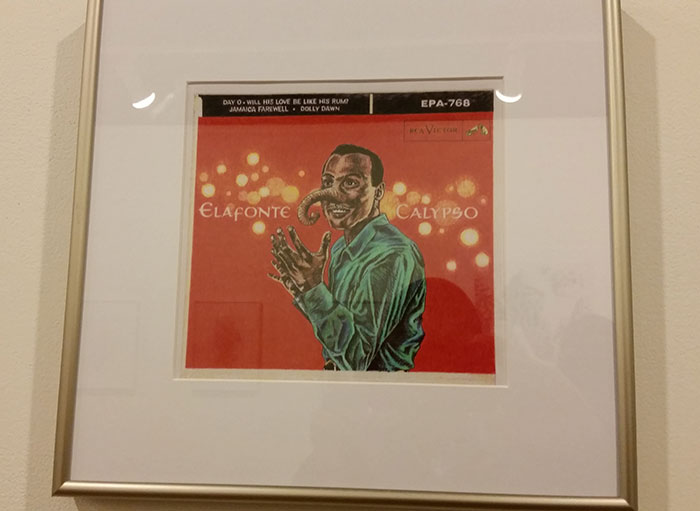 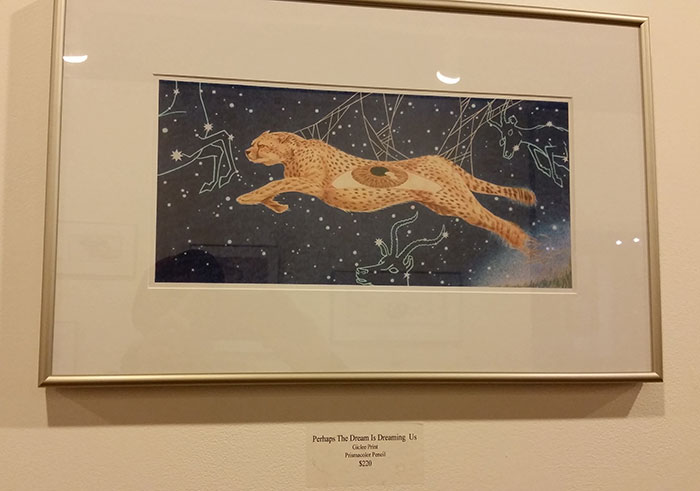 While not officially connected to the NoDa First Friday gallery crawl, the next night, I found myself wandering the massive gallery space at the Hart Witzen Gallery, located just across the Blue Line Extension construction at the corner of Benard Avenue and 36th St.

I arrived just in time for their Art Showdown – an interdisciplinary visual art competition featuring contemporary regional, national and international artists vying for “best in show.”

Rather than art being judged by a panel of art experts, the winners were chosen by patron votes. The attendees took their judging responsibility quite seriously, queuing up in lines as long as 15-20 people to cast their ballots. 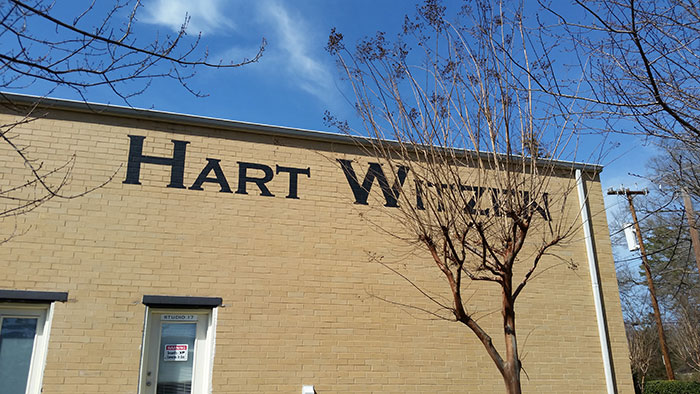 I was proud to see the work of a number of NoDa neighborhood artists in this well attended national and international competition.

If last weekend was any indication, the NoDa arts scene is discovering a way to evolve along with this rapidly changing community. 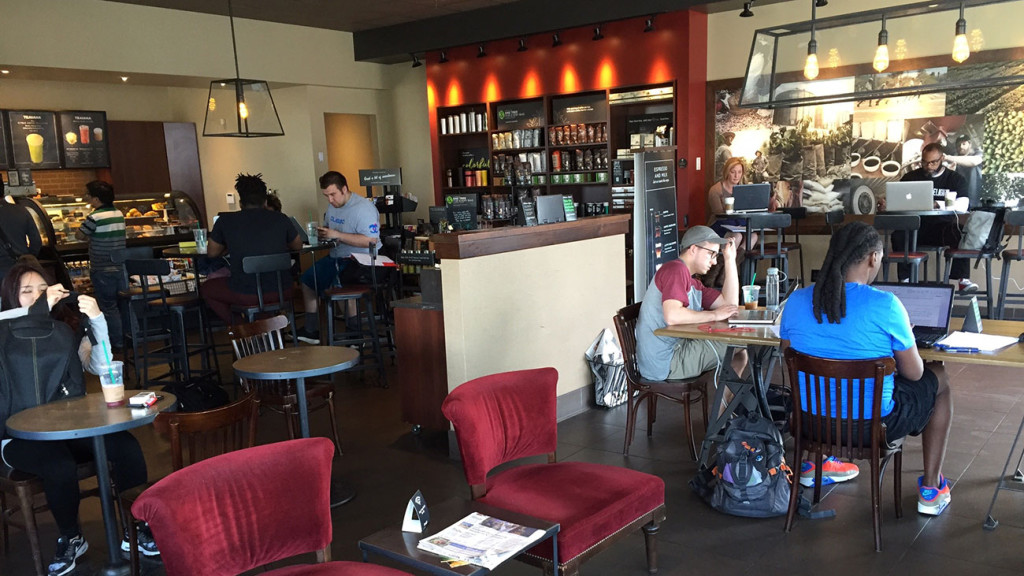 5 best coffee shops in the University area to work from