Days Gone By: ‘What’s playing at the Regency?’ 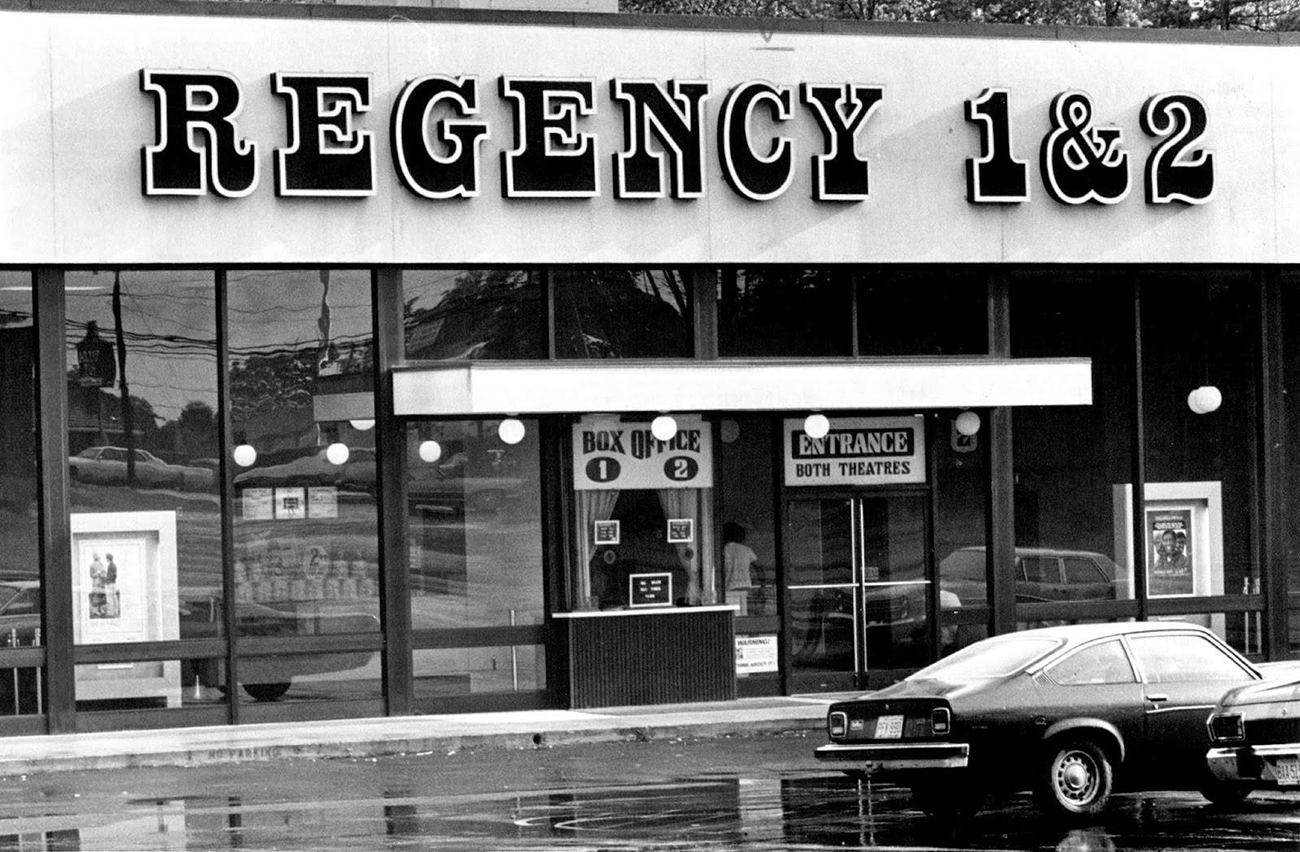 Editor’s note: This is the first installment of Days Gone By, an occasional series offering a nostalgic look at long-gone elements of Charlotte’s past that were a big deal in their time.

The monolithic sign couldn’t be missed, beckoning passersby with the promise of cheap entertainment.

For many who grew up in and around east Charlotte in the ’70s, ’80s and ’90s, going to the movies meant going to the Regency, the area’s beloved no-frills movie house that operated off Albemarle Road near the intersection with Harris Boulevard for more than 20 years.

With its sticky floors of spilled soda and crushed theater candy, the Regency was a social magnet.

Why it was cool, Part I: It was, as CinemaTreasures.org puts in, “Charlotte’s premier discount theatre,” which also made it a top hangout for east Charlotte teens.

The Regency opened in 1975 and, despite two relatively brief stints as a first-run theater, is mostly remembered for its second-run glory. Admission was $1 (later $1.50), which made it ideal for a low-cost night out. It was also good for seeing a movie for a second or third time, or for catching those movies that you thought might be good.

Then: “I kinda want to see that. Meh. I’ll wait til it comes to the Regency.”

It started with two screens but eventually expanded to four. But you could argue that the movie wasn’t the point. The experience was what mattered: Fun on a Friday night. Hanging out with friends. Hoping you would run into your crush and that by some circumstance the night would end with the two of you becoming a couple (Note: This never came remotely close to happening for me).

It was one of the few places your mom would feel comfortable dropping you off in junior high.

“I remember paying to see the movie just to hang out in the parking lot.” — Christy Pressley Russell, via Facebook

“I remember waiting in line outside with my friends in front of the theater, which was a social event in itself.” — Charlynne Todd Smith, via Facebook

Why it was cool, Part II: For many years, the Regency offered the last (convenient) chance to see a movie for what was likely a long time.

If you grew up before the Internet, Netflix, iTunes and other digital conveniences, the only way to see a movie within a year of its release was to see it in a theater. Some movies made it to VHS faster than others, but the turnaround between theatrical release and home availability was much longer, or at least it seemed that way.

If the timing was right, you could improve your cinematic sophistication quite economically in one day at the Regency. One week in 1992, three of the five 1991 Best Picture nominees were playing at the same time: “Beauty and the Beast,” “JFK” and “The Prince of Tides.” For $3 and half a day, you could’ve earned serious movie-nerd credibility.

On the other hand, if a movie was bad and you didn’t want to stay until the end, you were only out $1.

“Star Wars when it came out, they oversold the joint and there wasn’t a seat available and people standing in all the aisles. My father raised hell, got our money back and we left. I was sad.” — Alex Mayhew, via Facebook

“I saw so many movies there. It was totally a hang out spot for the kids I grew up with in the early 80’s. My mom would drop us off and pick us up. I do specifically remember seeing “Taps” there — my best friend cried so hard and could not stop!  — Angie Stafford Elliott, via Facebook

Pre-Internet oddity: The Regency changed its lineup every Friday. This always brought great anticipation in my house. Before the Internet, you had to look in the newspaper to see which movies were playing. Or, if you were really impatient — as I often was — you could call the theater on Thursday night and hope the recorded message had been updated with the latest titles and showtimes.

Waiting on the line to hear whether a movie I wanted to see was playing felt like what I imagine playing roulette feels like in Las Vegas: Hope, followed by heightened anticipation, followed by either euphoria or extreme disappointment.

“Saw ‘Fast Times at Ridgemont High’ four or five Friday nights in a row there.'” — Richard Halliburton, via Facebook

“I snuck into my first R movie there. Caddyshack!” — Neil Armstrong, via Facebook

Memories: I don’t know how many movies I saw at the Regency, but I saw a lot. The original “Star Wars” trilogy stands out, as does “Indiana Jones and the Temple of Doom.” There was also “Popeye,” “The Philadelphia Experiment,” “Major League,” “The ‘burbs,” “Jaws: The Revenge” and “The Great Outdoors.”

Once you start searching your catalogue of memories, a trickle becomes a flood.

“My first memory of the Regency was when I was 8. My mom took me to see Terms of Endearment . My very first movie with my mom and I enjoyed the movie. To my mothers surprise I understood the movie. That was a lasting memory etched in my heart forever.” — Courtney Martin Agombar, via Facebook

“Summer of 1978, Star Wars (the first one) made it to the Regency. Mike Hervey and I would ride our bikes up there just about every week to spend our allowance. I lived on Lynmont, he lived on Marlbrook. We’d sometimes see Ric Flair out mowing his lawn, shirtless and blond, and he’d give us a great big WOOOO.” — Mike Newman, via Facebook

“I saw Raiders of the Lost Ark there and it blew my mind! Plus, me and some buddies snuck in to see ‘Halloween’ and we were so scared we left early and rode our bikes home FAST! That was the best time I ever cover 2 miles!!!” — David L. Smith, via Facebook

My favorite Regency memory came on a Saturday in August 1993. My brother and I saw an unofficial double-feature of “Cliffhanger” and “Dave.” I did this instead of finishing, er, starting my summer reading for AP English, and school was starting soon (spoiler: I didn’t do well in AP English). Naturally, I have better memories of “Cliffhanger” and “Dave” than I do of “Wuthering Heights” and “Tess of the d’Urbervilles.” I probably should’ve stayed home to read instead of spending the afternoon seeing movies, but my fondness for that memory won’t allow me to regret the decision.

The last movie I saw at the Regency was “Mimic” in late summer 1997. By this time it had returned to showing first-run movies. But it was not long for the world and closed shortly after that. The emergence of theaters with 20-plus screens, stadium seating and full-service concession areas were too appealing for people — including me — to settle for seeing a movie in an old-school theater setting.

It wasn’t long before the building was razed to make way for new development. Today, an Aldi grocery store sits just to the left of where the Regency stood, all evidence of those glory days long gone.

Charlotte has seen at least 43 movie theaters closed or demolished, according to CinemaTreasures.org. I’m sure they all provided similar pleasant memories to their faithful patrons. But the Regency was my theater. It was east Charlotte’s theater.

It was a staple in our lives across three decades. Few entertainment-related things seem to last that long these days. As businesses come and go, and as much of the city’s history passes away, such long-term experiences will fade too.

But not the memories.

Yes, when Friday night came and we wanted something to do, the question arose: “What’s playing at the Regency?” 50 ways to #CharlotteFirst when you spend money