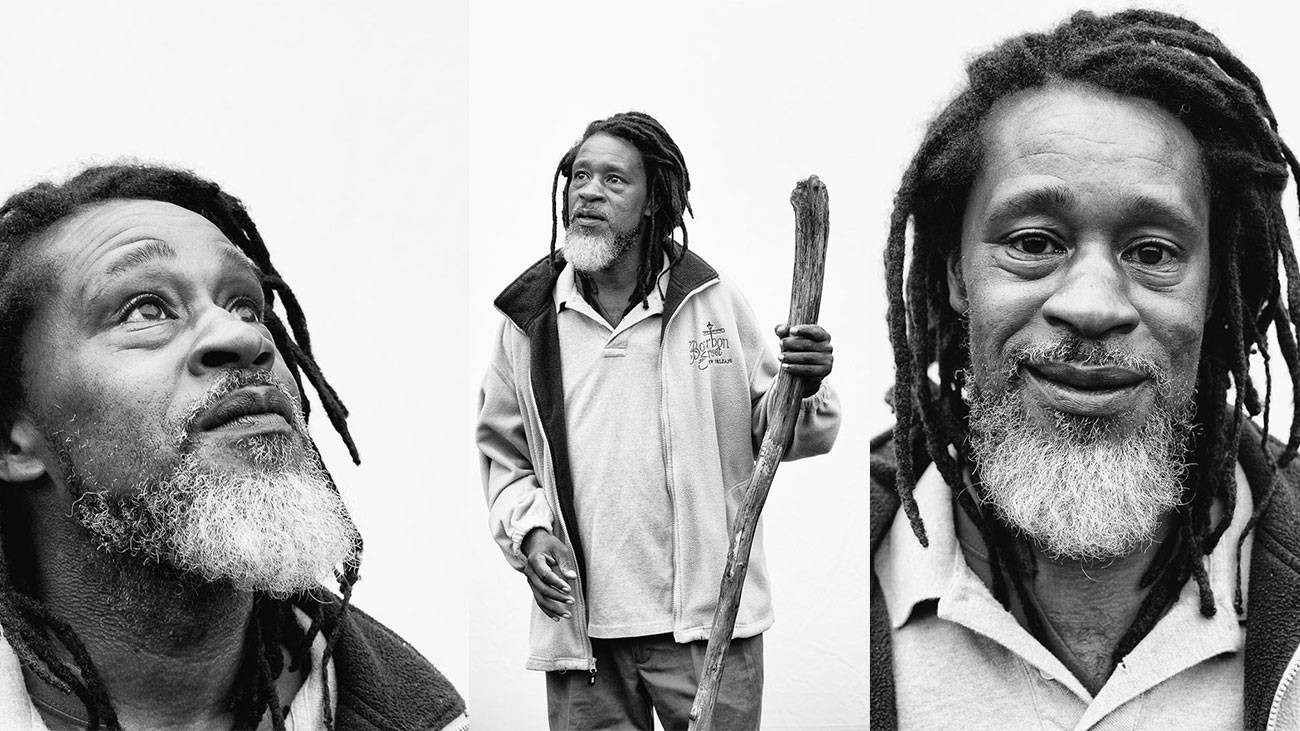 (Note: This story was produced by AboutFace CLT, an ongoing photographic and storytelling project that gives voice to the voiceless in our community. Learn more, AboutFaceCLT.)

My birth name is Paul Antonio Irving. I go by Seven, that’s my spiritual name, Seven. I’m supposed to be resting, but my work’s not done. I go by Moses. Some people call me The Black Moses. Those are my most favorite names.

Seven is a sign of completeness for me. Everything symbolically that happened to me is associated with a seven. I grew up at the age of seven, when I got molested. I saw life in a different way. 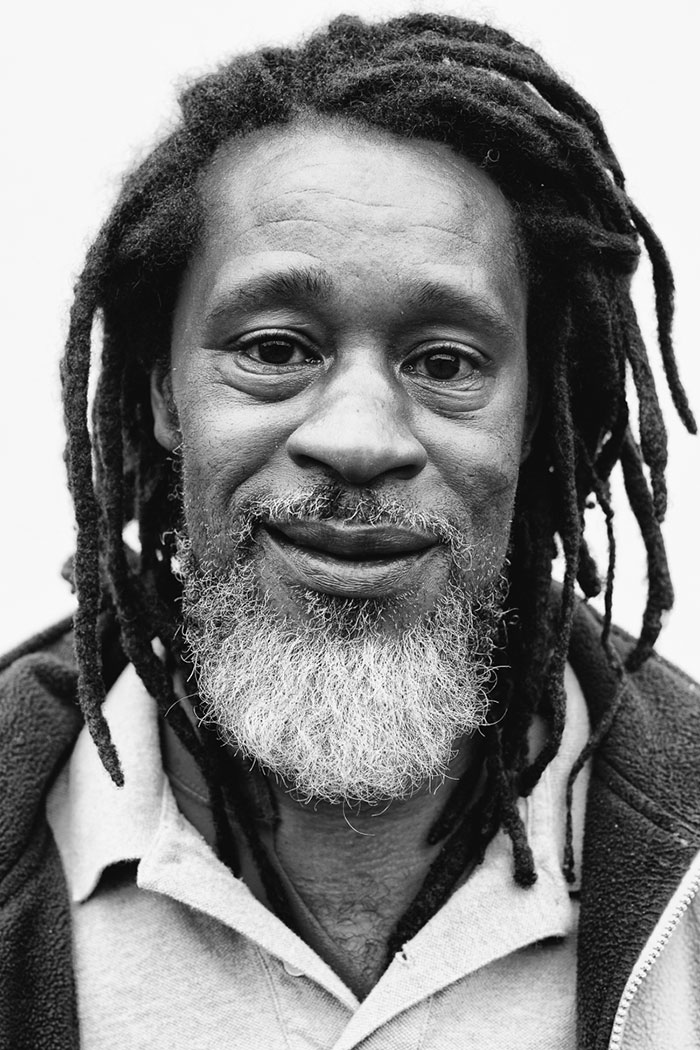 I spent a lot of time in the woods. And I learned how to like myself and like nature, and um, in the house, there wasn’t much peace for me. That’s another reason I like being on the block, because I’m at home. I’m at home with the elements, just the road and the cold weather… I feel alone, just waving at people and spreading my joy. Letting them know I care about them, even if nobody else cares about them.

I got bussed to a school. We were getting bussed there to equal out the white and black ratio. I went to Northeast Independence High, and I always felt like I wasn’t welcome. And so I failed out of school, it wasn’t for not being smart… I just gave up. 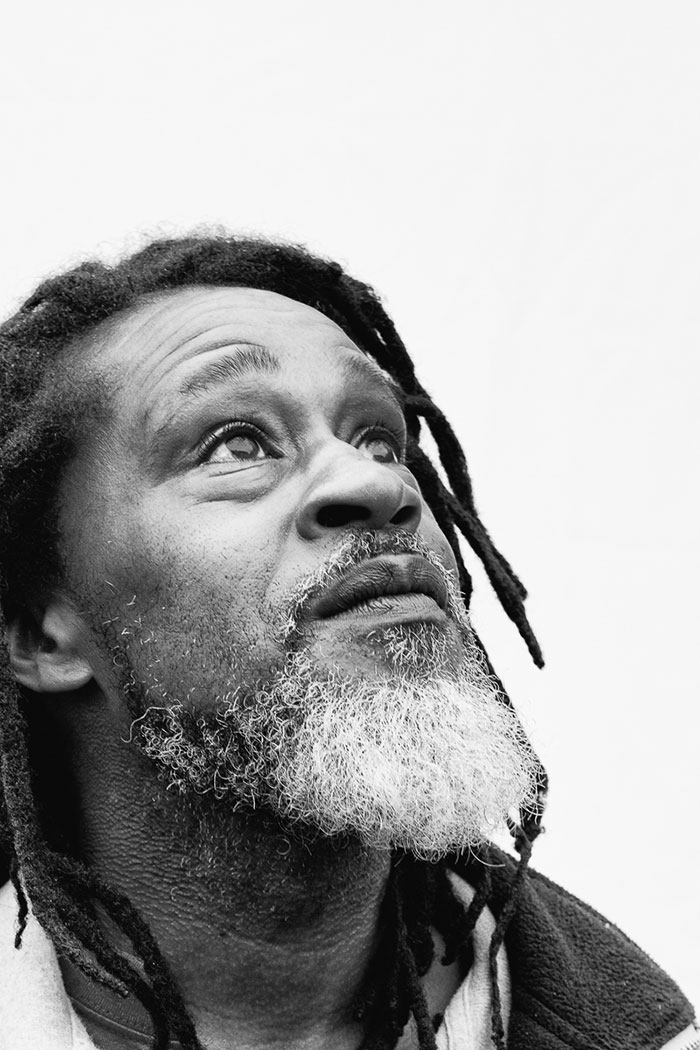 I lost my job, I got hurt on my job, and lost my job. My whole life was coming apart at the time. I was buying a rent-to-own house, this was during the housing crash, he was taking all the money and not paying the mortgage. And I just systematically lost everything and then I found myself homeless.

I met my brother, Lefty. I had been knowing him, he was already homeless. So, he showed me how to be homeless, how to go dumpster diving, get the food, what days are the good days to pick the food out the dumpster. I stayed in his tent with him for about six months.

He had an eight man tent but he had furniture in there and everything. And I stayed with him for about eight months ‘til I got my own tent. And so I graduated, and so I had my own tent – it was a small one – and so I graduated to a bigger tent. And then we got kicked off our land and stuff, and so we had to find another spot, and I found it. And he came down to stay with me, in the same patch – woods and stuff.

When I was in the woods, I never kept track of time. I was just in a void. And so I didn’t count the days or years on a calendar. I had a lot of time and could do a lot of thinking. I was out there when there was snow on the ground, I was out there in that tent, in the ice and the cold. When it rained I was out there. When the deer came through my campsite looking for something to eat, I was out there.

I used to take my five gallon bucket and bust holes in it, to free up the ice, and pour it in a metal pan and use Sterno lighters to heat up the water in the winter time, just so I could, you know, wash myself. I was out there.

When I was younger, I thought it was fun to step on an ant mound and see the ants go crazy. When I became homeless, and I didn’t have anything, you could not pay me or threaten me to step on an ant mound. That’s their castle. It really is. That’s their castle. That’s why when you disturb it, they fight so hard to rebuild it. You messed with their paradise just for being mean. It was all nice and cozy and I’m going to sit there and kick it and laugh and giggle about it. I can’t believe I used to do that kind of trash.

I went through enough pain in my life that when I got to the point and I had lost everything and I hit rock bottom… so far as the foreclosure, and becoming homeless and stuff… I had no choice but to put a smile on my face. If I didn’t smile I would cry. I would cry. That’s what really got me thinking about, “You know what, you’ve got so much to be thankful for, even being homeless.”

Smilin’ & Wavin’: Moses begins his street ministry, standing on the street corner smiling and waving at people as they drive by, and preaching to them when they stop at the light.

A little bit of love goes a long way, and if somebody can give a wave back because somebody waved at them, there’s light in them. There’s light.

The joy comes from being accepted. In order for somebody to appreciate my wave, they’ve got to accept me as a human. I didn’t give them paws up because I’m not a dog. I saw a human being waved at me and I appreciated it. So we connected. I threw it out, whenever I throw out a wave, I’m fishing. And when somebody bites, they’ll wave back or they’ll point back, or they’ll pop up peace. And that’s one out of ten cars.

But when somebody stops and tells me, “I missed you. I missed you when you was in the hospital I heard about what happened when you got ran over. I miss you being out here and your smiling and your wave. My kids know you, I told my kids all about you. I told my cousin about you, you’re always smiling and waving.” That makes me feel real good, that’s where my joy comes from. Because I’m impacting peoples lives.

There’s a lot of people that go through life and never have anybody smile or wave at ‘em. But I do. And so after a hard day of work and running around they get a smile and a wave out of me. I wave at everybody.

I only get 90 seconds at a light. Dr. Jane says I’m the master of the 90 second sermon. I let people know. “This is what I’m going to do for you at this light, I’m going to help you out with your theology. For you to believe that God made Adam and made man in his own image, you have to believe that you are a child of God. If you believe that, then you are a God. Why is that?

“Only God can make Gods, only dogs can make dogs, only cats can make cats. Psalms 82:6 says I told ye, all of ye are God’s, all of ye are sons of the utmost high. God made you in his very image. Not as himself, but as a lesser God. He sent his only begotten son to live for eternity. You have to be a God, you can’t even be in your flesh body.

“So your destination is to be a God, that’s how you communicate with him when you pray. You don’t pick up your telephone, and dial the hotline to God. You just go from your spirit. That’s your spirit which is eternal, your connection. You’re going to spend eternity somewhere, either in heaven or in hell, but nobody truly dies.” 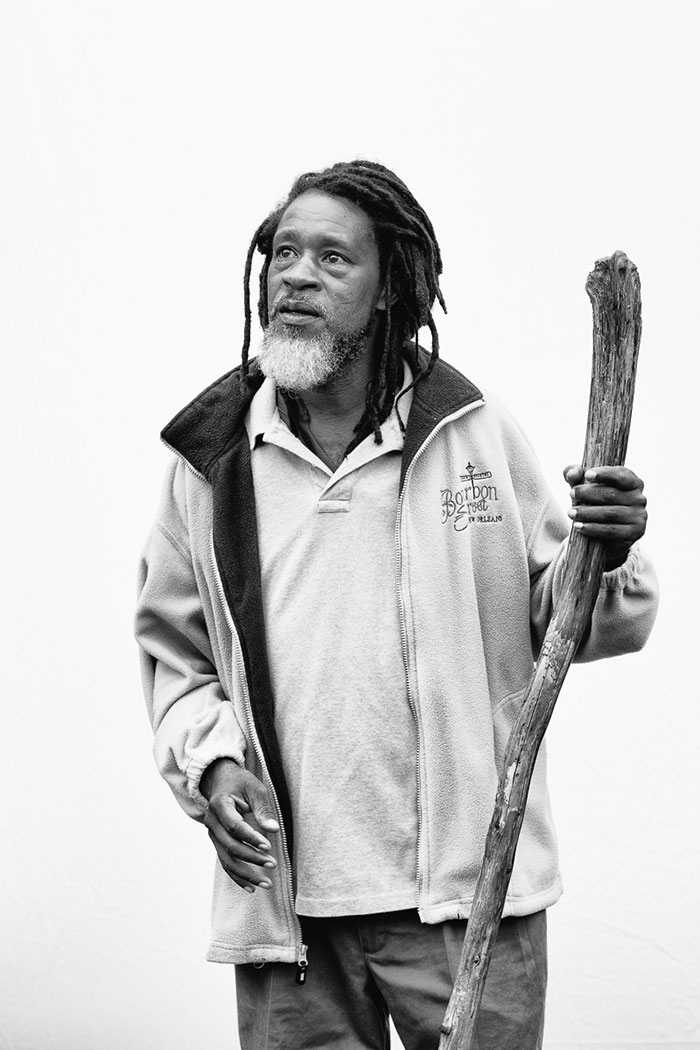 He was like, “You can always come back out to the woods, but we have a program, would you like to hear about it?” It’s like whatever, I didn’t want to go. I didn’t want to go, I got, in my mind, so used to my life, I thought that that was all that it was. I didn’t see myself in this apartment or getting any kind of assistance. He walked me out of it.

It’s important to have somebody walk you out of it. I’ve never been in prison before, but there’s a name for people who’ve been in prison all their lives, so long, it’s called being institutionalized. They can’t see anything else. They get out and go right back in. To us that sounds crazy. But to them it’s all they know. And so you have to be walked out. Mr. Brown walked me out.

And like I was saying earlier, when I first got into this apartment and it was empty, and I came in and saw this big living room, I said “Perfect! I can put my tent right here in the living room.” And he had to tell me, “No, we’re gonna get you furniture.” (laughing) So I was a true bushman.

MeckFUSE and Urban Ministry, what they’ve done for me has changed my life. And that’s another big reason I smile so hard. Because I could have it rough, I could be out there in the woods.

And I thought that’s where I would be at until the day I died. So that’s why the light comes out of me, this is easy, I got it made now. It’s just easy being able to be thankful. I got a lot of things to be thankful for.

There’s just so much I have to be thankful for. 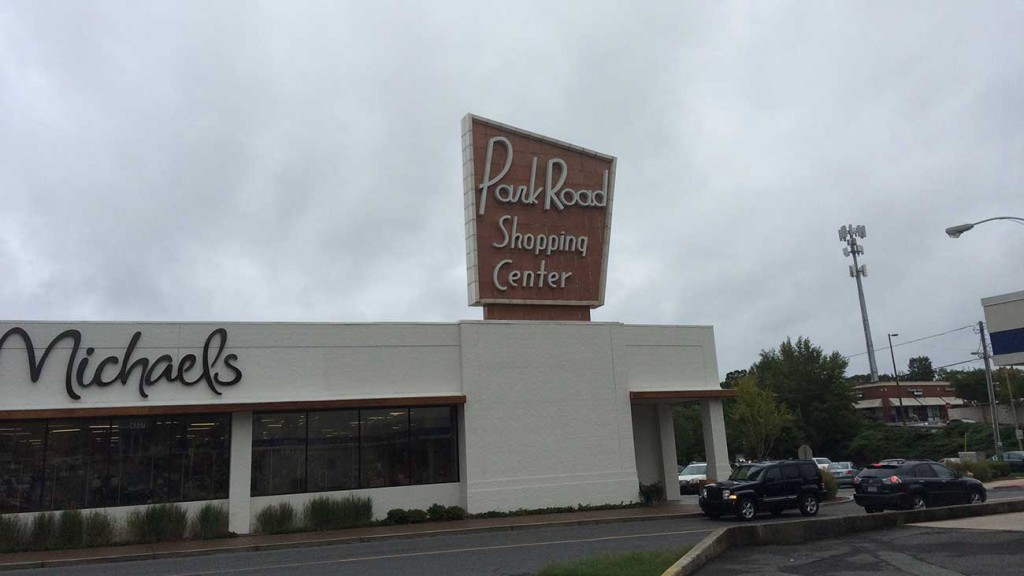 8 Charlotte destinations for a one-stop-shop