Charlotte’s biggest blunders: the most talked about mistakes and mishaps from the past 20 years While a great city, it has taken Charlotte some time to grow into the banking and soon-to-be brewery town that it has become. Growing up here, I have watched several events unfold, changing Charlotte for the better, or worse, and making her into her own. When I first moved here, the only thing in University City was a Shoney’s. Back then, breweries were a taboo thing, and I-485 had barely been built.

Here’s a look back on some of Charlotte’s biggest blunders and messes.

This is the one we wish hadn’t happened. Back in 2000, the speedway was called Lowe’s Motor Speedway before it returned to its former glory in name. Following the All-Star race on May 20 that year, more than 100 fans were crossing the pedestrian bridge leading from the race to the parking lots. The bridge went over Highway 29. As the bridge fell, 100 fans were injured, some needing to be airlifted from the scene. Investigators found Tindall Corp., who built the bridge in 1995, used a bad additive to make the concrete filler dry faster. The additive contained calcium chloride, corroding the steel cables, causing the collapse. By August 2000, the bridge was getting rebuilt, sans calcium chloride. 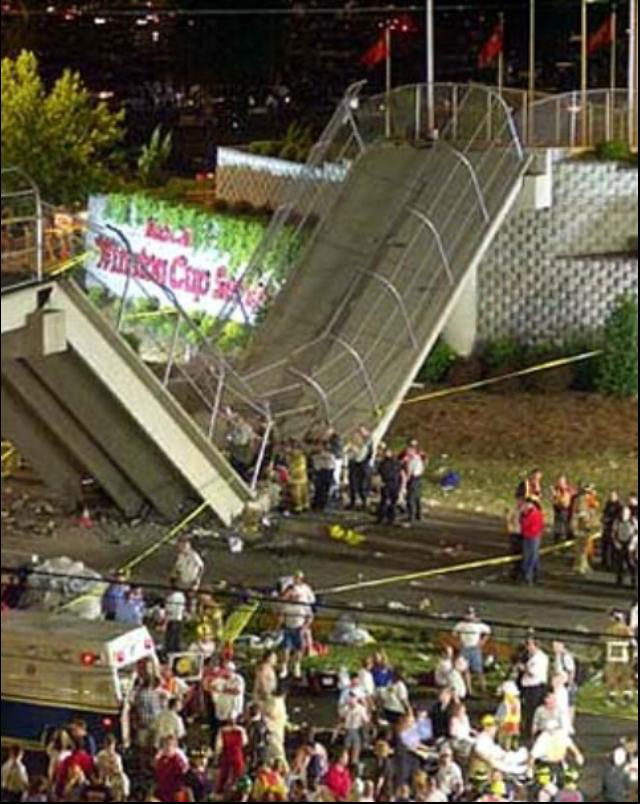 Photo via the Nascar Past and Present Facebook page

Back in 1997, a robbery of epic proportions hit our streets. Steve Chambers, an armored car driver and David Ghantt, a Loomis Fargo vault supervisor, made off with $17.3 million in cash, the largest heist in U.S. history at the time. A former employee, Kelly Campbell, introduced the two and the three planned to take the money, with Ghantt leaving for Mexico. Ghantt was arrested in Mexico and in his court appearance, former Charlotte Observer reporter Tommy Tomlinson noticed Ghantt had a tattoo of a Klansman riding a horse. The hillbilly heist, as it became known, was the basis for the Zach Galifianakis film, “Masterminds,” which should be released at some point. The thieves were all imprisoned and have all been released.

(Correction 10:49 a.m. – Agenda just received an email from Tommy, “… I wanted you to know that it wasn’t David Ghantt who had the Klansman tattoo on his neck. That was Mike McKinney, one of the guys who got hired to kill Ghantt.”)

Drafted in 2001, Steve Smith Sr. is arguably Charlotte’s favorite Panther. Playing for 13 years with the Panthers, Smith set records, was consistently shown during game highlights and gave us the most quotable material. The Panthers released him in March, and thousands of Charlottean hearts were broken. Smith signed with the Baltimore Ravens but still considers Charlotte his home. He hosts the Lace Up Son Family 5K, an event sponsored by the Steve Smith Family Foundation. Smith will be retiring at the end of this season. He told Charlotte Magazine in August he wanted to spend more time with family and travel. While the Panthers are doing well currently, winning would sound sweeter with a Steve Smith zinger to go along with it. 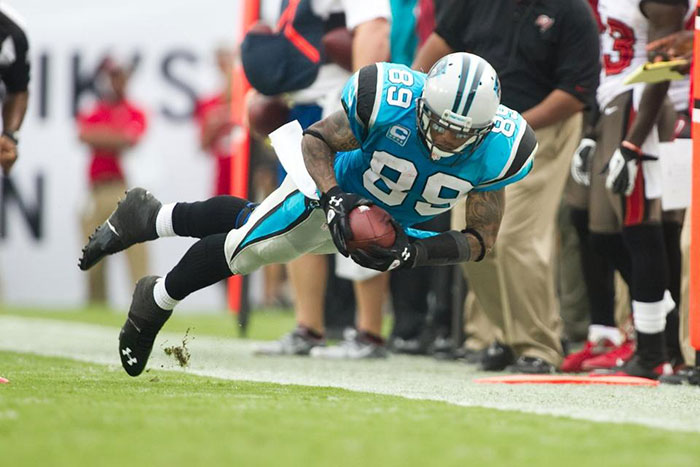 In 2011, 1,170 parcels of land were discovered to be undervalued. Charlotte property owners faced significantly higher revaluations, and many found they owed back taxes. County law says current owners are billed the taxes of undervalued properties. Essentially this is causing many current owners to be billed for taxes not paid from previous owners of property. The whole situation burned a lot of people and made many people share their disgusted thoughts with the county on social media.

Once upon a time, Charlotte had a young, fierce mayor named Patrick Cannon. The city loved him for his tenacity and drive. Then one day he fell from grace. Cannon was arrested on March 26, 2014 on federal corruption charges. He had been mayor for less than six months and pleaded guilty to accepting $50,000 in bribes. He began serving a 44-month long sentence in a West Virginia prison in November 2014. Charlotte has since moved right along and elected Jennifer Roberts. During 2015’s Central Intercollegiate Athletic Association’s annual tournament, the Ritz-Carlton tacked on a 15 percent surcharge to customers. Patrice Wright was one customer who came into the Ritz to enjoy some afternoon drinks. She saw the surcharge and asked her waitress about it. When the waitress had no idea about it, Wright went home and posted her receipt on Facebook.

Wright said the CIAA was going to have to take legal action against several club promoters who were hosting “CIAA parties” with no such clearance from CIAA officials. Wright was confused as to why the Ritz was able to include a “CIAA surcharge” that did not benefit the CIAA.

The Ritz offered Wright lunch to talk things over.

“What struck me more than anything was the lack of ownership, and they never apologized to me,” she said. “I didn’t want lunch… Just own up to it.” The hotel never confirmed whether they tack on fees for other popular events in town. After complaints and involvement by the state’s Attorney General, Roy Cooper, the hotel agreed to refund customers who paid the charge, donate $75,000 to the CIAA Scholarship Fund and pay the N.C. Department of Justice $5,000 for consumer protection efforts. “Even the $75,000 — that was because they were going to get investigated,” Wright said. “That is not an apology, that is a settlement.” 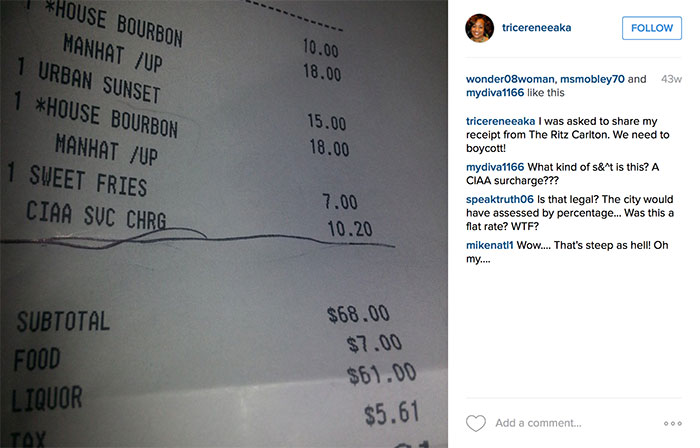 Wachovia, once a North Carolina treasure, was bought in 2008 by Wells Fargo at the peak of the financial crisis. Prior to being acquired, Wachovia — founded in Winston-Salem and headquartered in Charlotte — was the fourth largest bank in the United States. As the economy started to fall out, Wachovia became a victim and the Federal Reserve popped in to ask Wells Fargo to step in. Wells Fargo is now the fourth largest bank in the nation, according to Forbes, and is headquartered in San Francisco.

An idea that began almost three decades ago wrapped up this summer when the final phase of Interstate 485 was completed. The 67-mile loop circles around the entire city offers access to 277, 77 and 85. The idea for the beltway began in the 70s and the first portion opened in 1990. The final segment of the project cost $231.7 million — and that was only 5.7 miles of the whole loop. While a convenience now, the construction caused headaches and many motorists to never believe it would be completed. 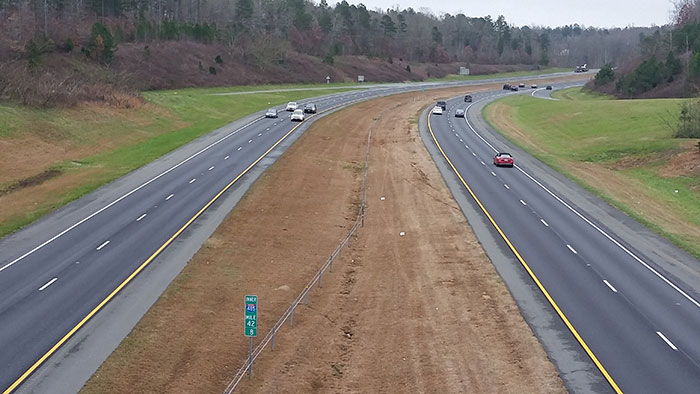 I-485 took nearly three decades to complete and is 67 miles, wrapping around the city.

In their ninth season, our beloved Panthers made it to Super Bowl XXXVIII in 2004. The game brought us Jake Delhomme mania and the term “wardrobe malfunction.” While I never want to see Janet Jackson’s exposed breast again, I would love to see the Panthers head back to a Super Bowl game.