Lost on the way to NoDa? Might as well explore 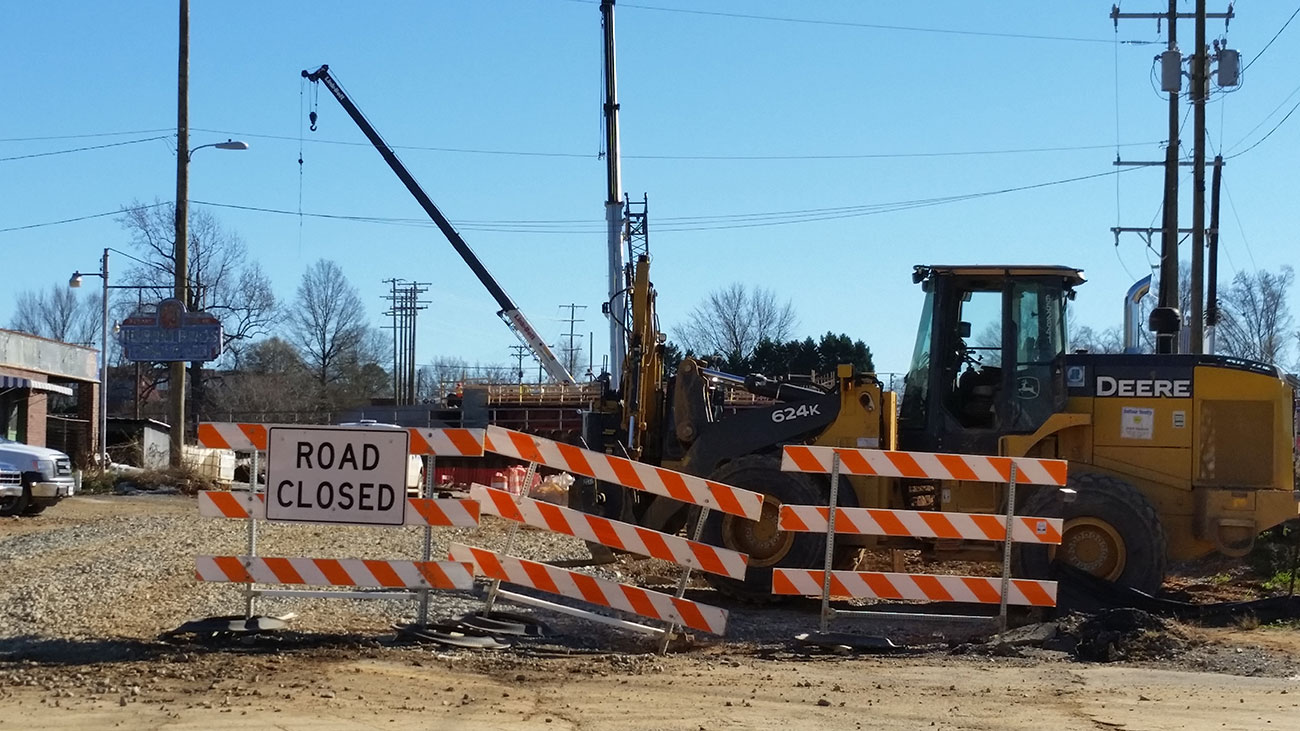 If you are driving on North Tryon Street and turn off onto 36th Street, there are two very distinct possibilities.

The first is that you are one of the lucky few who live in the tiny enclave of tree shrouded bungalows on Ritch and Benard Avenues, nestled snugly along an untamed section of Little Sugar Creek.

The second, and more likely possibility, is that you are hopelessly lost.

Perhaps you were heading to a concert at The Neighborhood Theater or the Evening Muse. Maybe you wanted to pick up a gourmet coffee at Smelly Cat or The Daily Press. Or you might have ventured out for a beer at Salud or to give your dog a romp at The Dog Bar. Possibly you had your heart set on the bounty of produce at the Saturday NoDa Farmers’ Market. But when you drove to the barricades at the site of the future light rail station and stared into the massive construction pit looming ahead, you realized that your GPS had failed you.

Maybe you rolled slowly down Cullman Avenue past warehouse after warehouse, hoping in vain for an unmarked side street that would take you across those railroad tracks.

After all, you could see the heart of NoDa just a few meager yards ahead on the other side of all that mess. 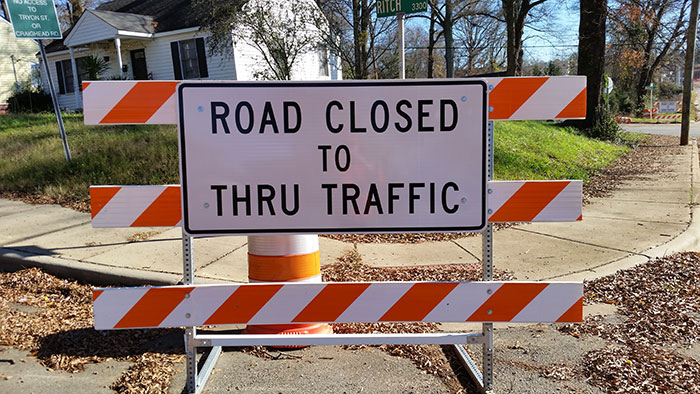 But when Cullman Avenue dead-ended at yet another railroad spur, you sighed deeply, turned the car around in the huge cul-de-sac and crawled slowly through the mud, gravel and dust back to 36th Street.

All the while cursing your outdated cell phone. And probably your cell phone carrier too –  just because.

But next time this happens to you, before you make your way back to Tryon and decide whether Craighead or Matheson is the better detour option, you should take a minute to explore the tiny spur of Benard Avenue.

On the south side of 36th Street – just across from those cute bungalows you drove by earlier. Tucked away on this dead-end street is a small collection of interesting shops, galleries and businesses.

While cut off from the rest of NoDa for the next ten months or so, due to the light rail construction, these businesses offer a wealth of shopping and browsing possibilities that too few people have an opportunity to experience.

But you’re hopelessly lost, so turn onto Benard, park the car and get out and explore. 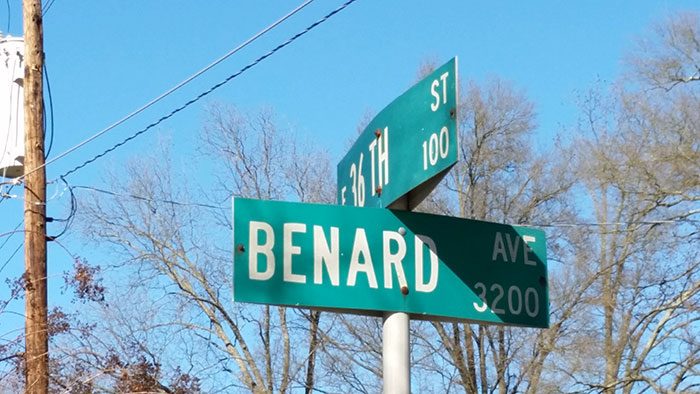 You start your adventure at The Hart Witzen Gallery at 136 East 36th Street. Hart Witzen operates as an independent arts space – one of a dwindling number of galleries currently operating in the rapidly changing Arts District.

The gallery is a privately owned, self sustaining arts venue, supported through the rental of galleries and artist studios. Their 30 private artist studios provide an affordable workspace for artists in a creative environment. The venue’s gallery boasts a spacious 5,000 square foot exhibit space, which can accommodate up to 350 guests.

If you are lucky enough to happen upon a gallery opening, (as this writer was a couple of months ago) you might see a display like Nocturnal Sun, the multi-media fire and ice exhibit, which brought the majesty and beauty of Iceland to life in North Charlotte. 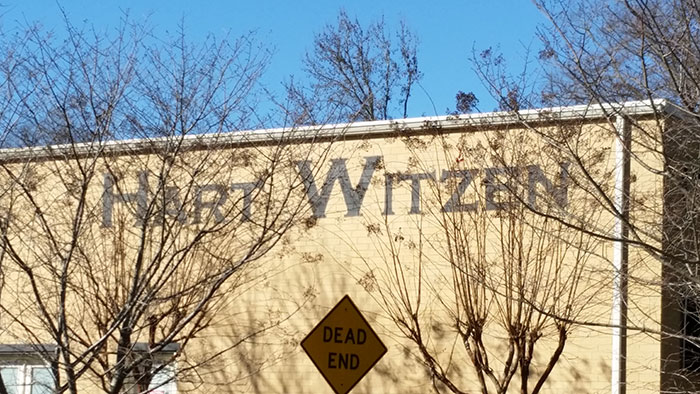 In yet another former warehouse, in the midst of dozens of former textile mills and warehouses that comprised the lifeblood of NoDa decades ago, Seeds is easy to find with the distinctive miniature windmill gracing the front entrance to the building. In the evening, when the sun is setting and the wind is blowing in the right direction, you’ll be treated to one of Charlotte’s most spectacular skyline sunset views, with the little windmill chugging away near the building entrance. 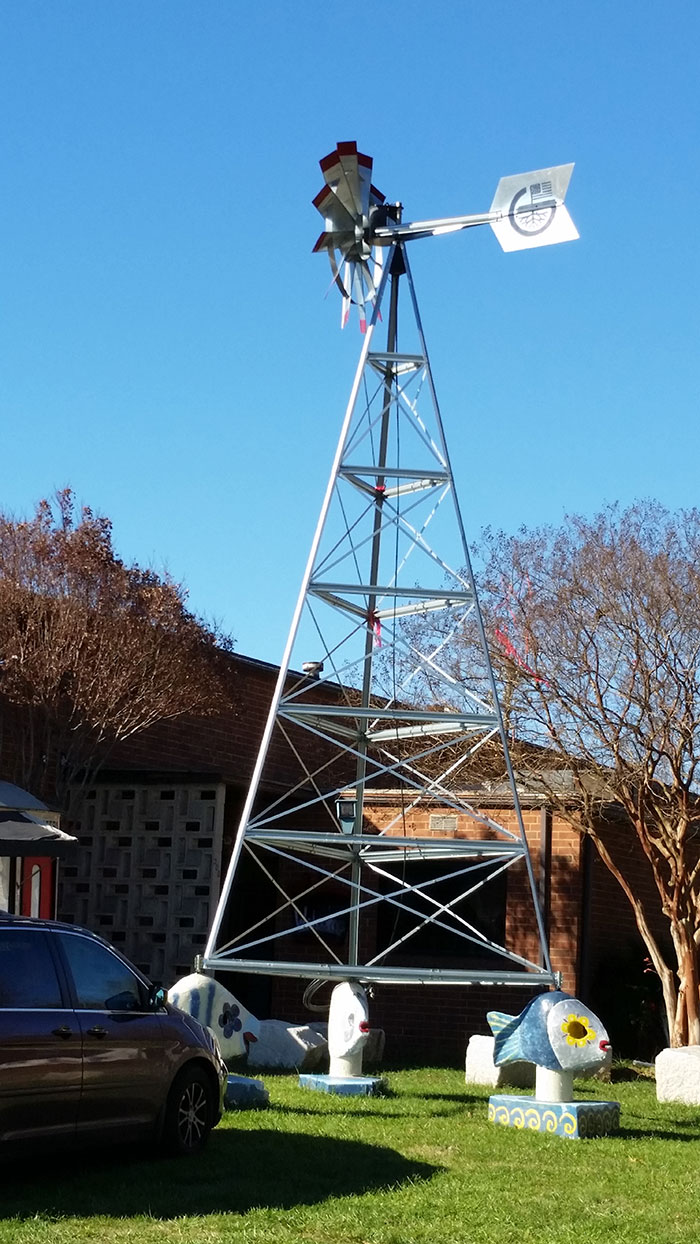 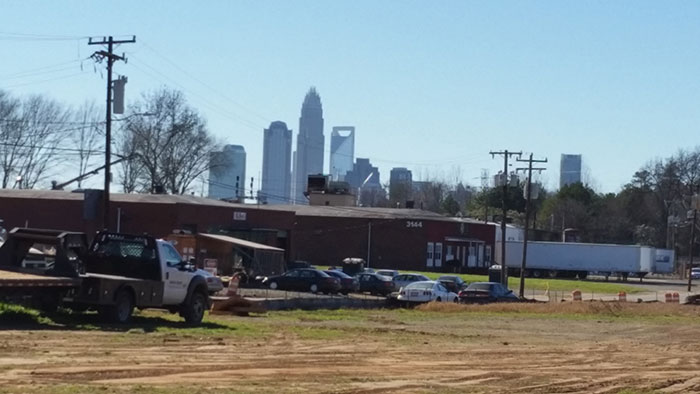 The Seeds building houses an eclectic array of businesses, including a tilapia fish farm called The Queen City Tilapia Company. Who would imagine that the highly urban neighborhood of NoDa would house a fish farm?

But other surprises loom ahead.

The building is also home to 100 Gardens, a company which is on a mission to establish 100 high yield aquaponic food systems in locales as far away as Haiti and as close as Garinger High School.

Just down the hall is the broadcast studio of one of Charotte’s newest and growing community operated radio stations, called Charlotte Community Radio. With a motto of “Let’s Build It Together” the station operates as a non-profit, community focused, volunteer run, non-commercial venture that serves as a forum for people, issues and events that traditionally lack media access.

With a diverse array of music and talk programming (organized entirely by community volunteers) the station strives to put the “community” back into radio and is actively looking for on-air and off-air volunteers.

On a crisp fall evening, this writer was fortunate to catch the Citizens of the Universe theater company performing a series of one act adult-themed plays written by legendary childrens’ author Shel Silverstein. This ribald and engaging night of theater is typical of the under the radio shopping and entertainment options available just beyond the light rail construction from downtown NoDa.

Continuing south on Benard, one arrives at another former warehouse at 3224 Benard Street.

The first business in this building is the Vintage Barber Salon. I can write from experience that the Salon provides an outstanding old fashioned barber shop experience. Attention to detail, reasonable prices, a pleasant and relaxed atmosphere, and all the sports talk a person could hope for are the attributes of this small shop.

Further down the street in the same building, Reinvented Charlotte provides one of Charlotte’s most unique and entertaining vintage furniture shopping experiences.

With new inventory arriving nearly daily, one seemingly never enters the same store twice. The stock of eclectic, functional and hard-to-find pieces can be bought one of two ways. “As is” purchases are sold for a lower price. For slightly more, the store’s team of painters (I think of them as artists) will work with customers to find color combinations, levels of distressing and similar painting options to fit any taste.

As one whose home holds several of Reinvented Charlotte’s pieces, I can personally attest to their high quality, style and affordable prices. Last, but not least in the warehouse space, resides the art studio of well known NoDa artist Osiris Rain. Osiris Rain is an international award winning post contemporary representational painter who received his formal studies for painting in Florence, Italy and at the Angel Academy of Art, and in Norway, under Odd Nerdrum.

Rain’s work is collected internationally and has been featured in publications such as The Artist’s Magazine, Southwest Art Magazine, Plein Air Magazine, Fine Art Connoisseur, and The Huffington Post. His work has been featured in galleries and exhibitions from California to New York City and can be viewed locally in numerous galleries spanning from Asheville to Raleigh to Charlotte. 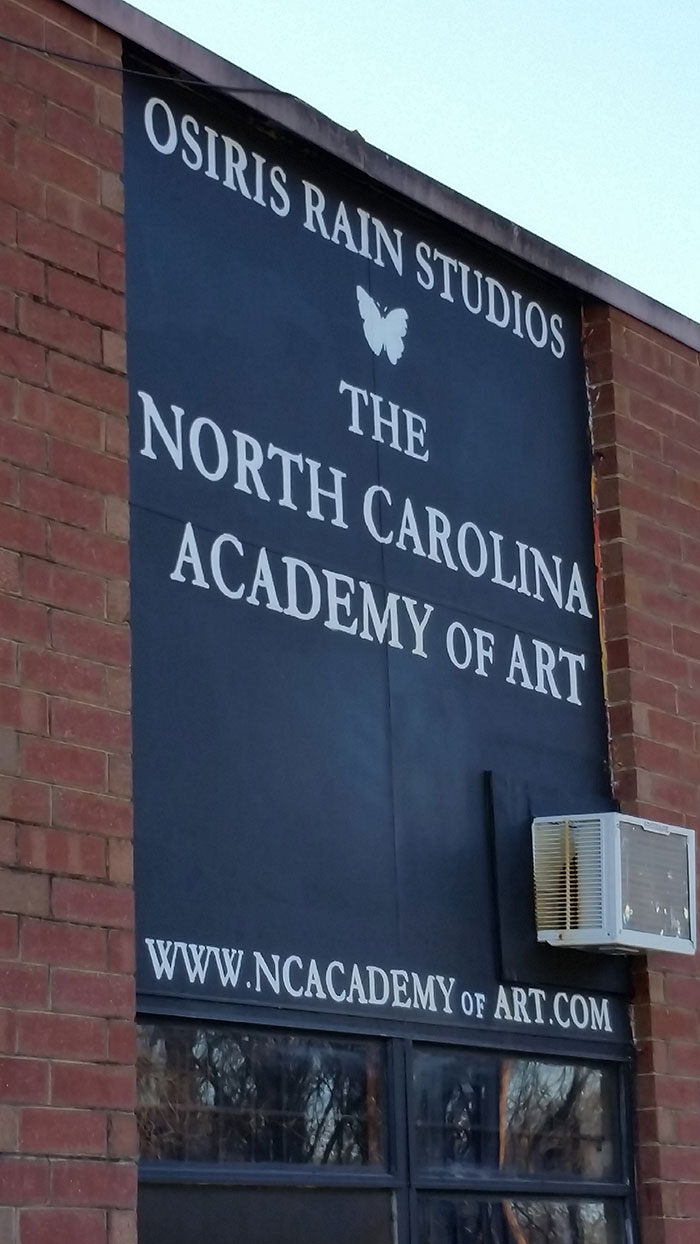 In addition to his personal artistic work, Rain also is the founder and principle instructor of the North Carolina Academy of Art.

The North Carolina Academy of Art is a small and dynamic center dedicated to the training of artists through the combination of intense observation with advanced craft skills. The curriculum derives from the classical-realist tradition rooted in the 19th century (most particularly exemplified by the French Academies in the teaching of master painters like Gérôme, Bonnat and Carlos Duran) but also addresses the creative and professional position of the artist in a contemporary environment. 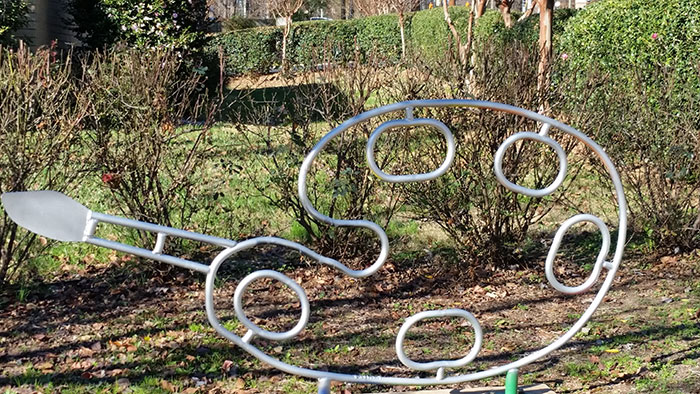 From a fish farm to a radio station to a barber shop to an internationally-inspired artists’ academy, making a wrong turn on 36th Street should be viewed as anything but an inconvenience.

Next time it happens to you, slow down, find one of the ample parking spaces and stroll through this little venue of compelling businesses and shops. The area that will soon be a vibrant extension of the Little Sugar Creek Greenway is currently home to a dynamic assortment of shops and artistic work spaces.

Getting lost here will be a pleasant surprise. 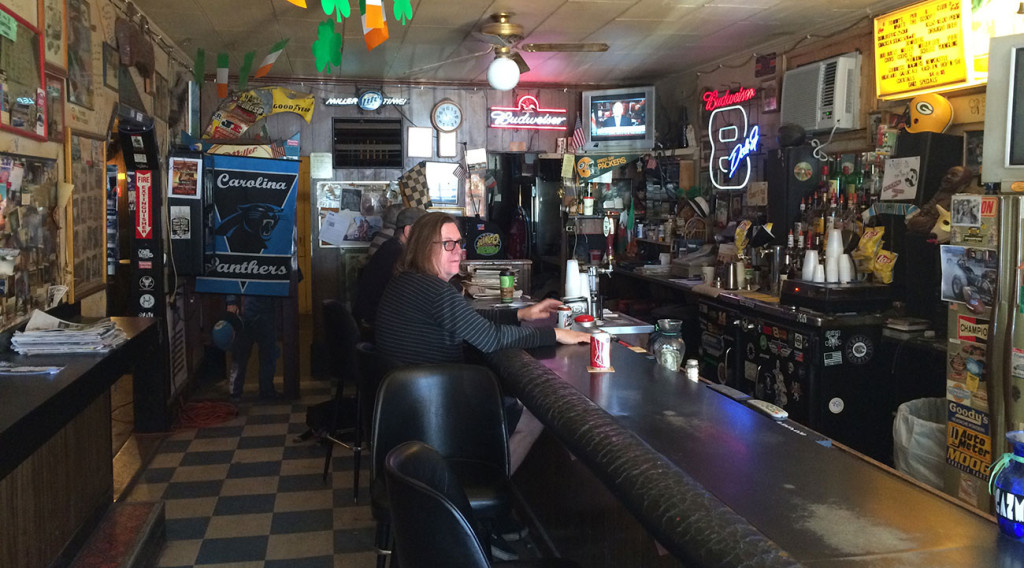