A guide to the 2022 Presidents Cup in Charlotte 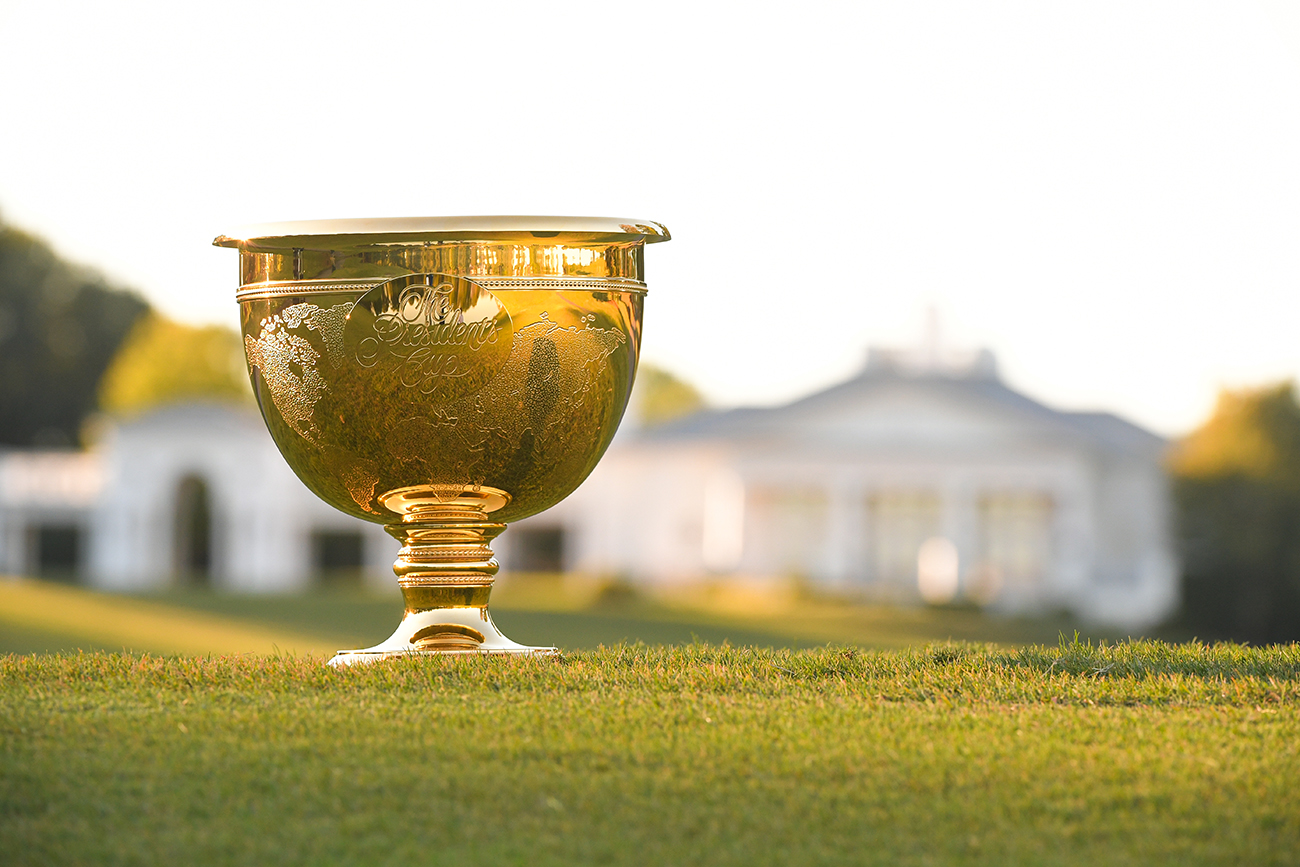 The eyes of the golf world are on Charlotte’s Quail Hollow Club this week.

Why it matters: Charlotte is more than banks and beer. This is golf country, and it’s about to become the first place in the Southeast to host the Presidents Cup.

Details: Thousands will flock to Quail Hollow Club in south Charlotte Sept. 20-25 for a golf tournament unlike anything the city has seen, with nods to Charlotte neighborhoods like NoDa and South End behind certain holes. 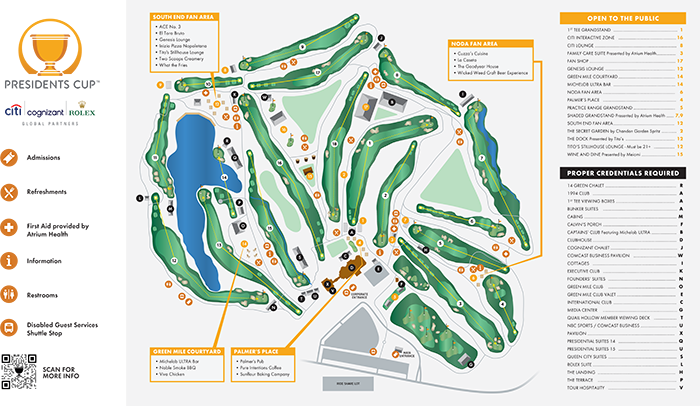 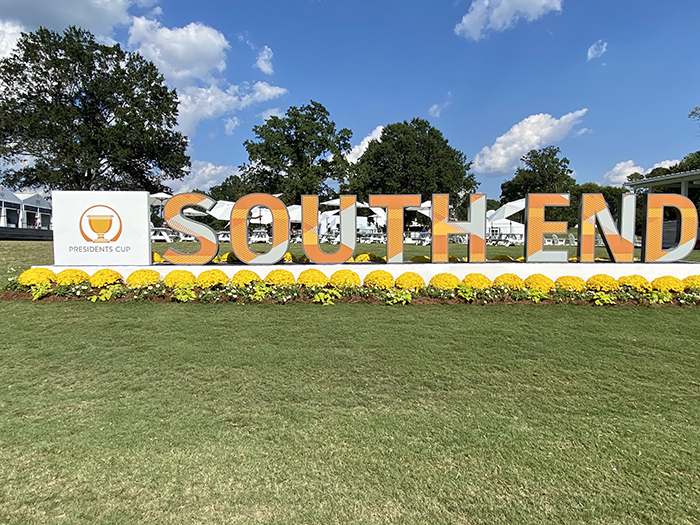 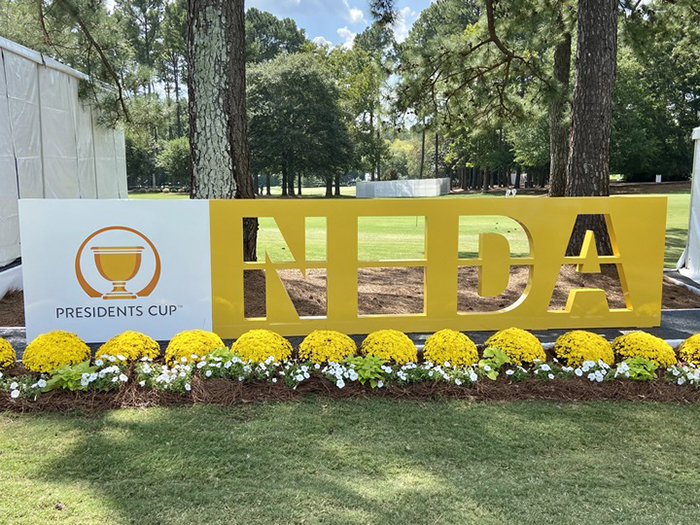 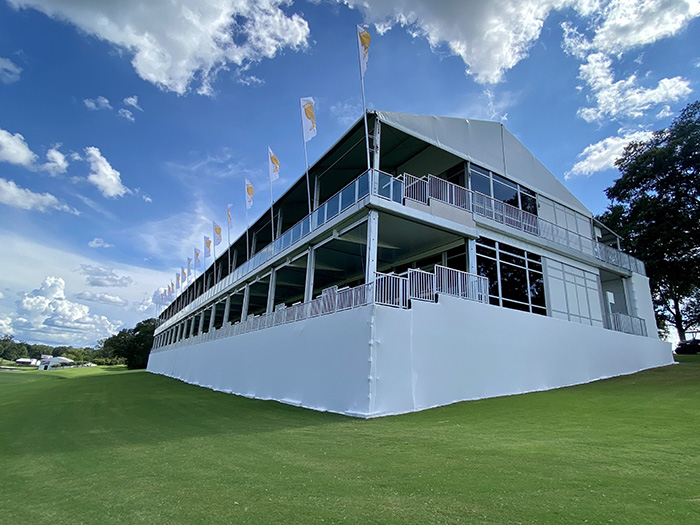 Plus you’ll find a dozen local food and beverage vendors at the tournament, as Axios’ Laura Barrero reported, including: 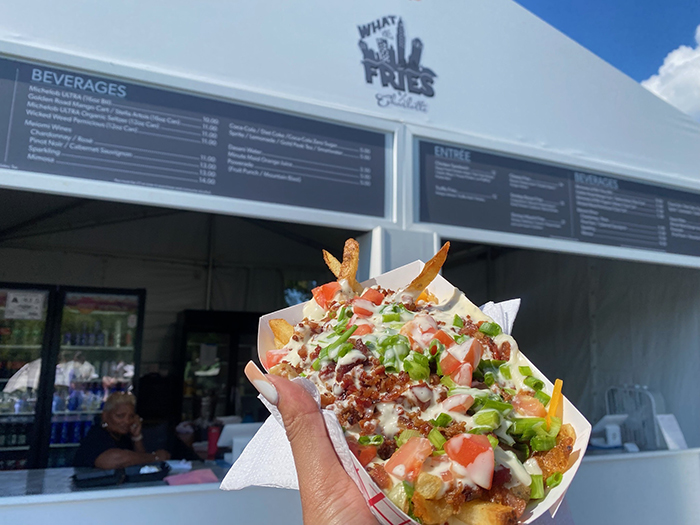 Tickets: They won’t be cheap for this event, but they are still available, starting at $60 for the early part of the week.

Keep in mind, if you’re traveling from out of town or know people who are, Airbnb prices will increase during the Presidents Cup, as Axios’ Alexis Clinton reported, some by thousands of dollars.

Parking: There will be six lots available for the Presidents Cup, ranging from free to $40 (plus taxes and fees). Each lot requires prior purchase or a reservation to ensure a parking spot. Shuttles will take you to and from the lot to Quail Hollow Club’s main entrance. Parking is on sale now.

Of note: You can also take public transportation or use a rideshare to get to and from Quail Hollow Club.

What to wear: Laura has you covered with plenty of local options for the course. 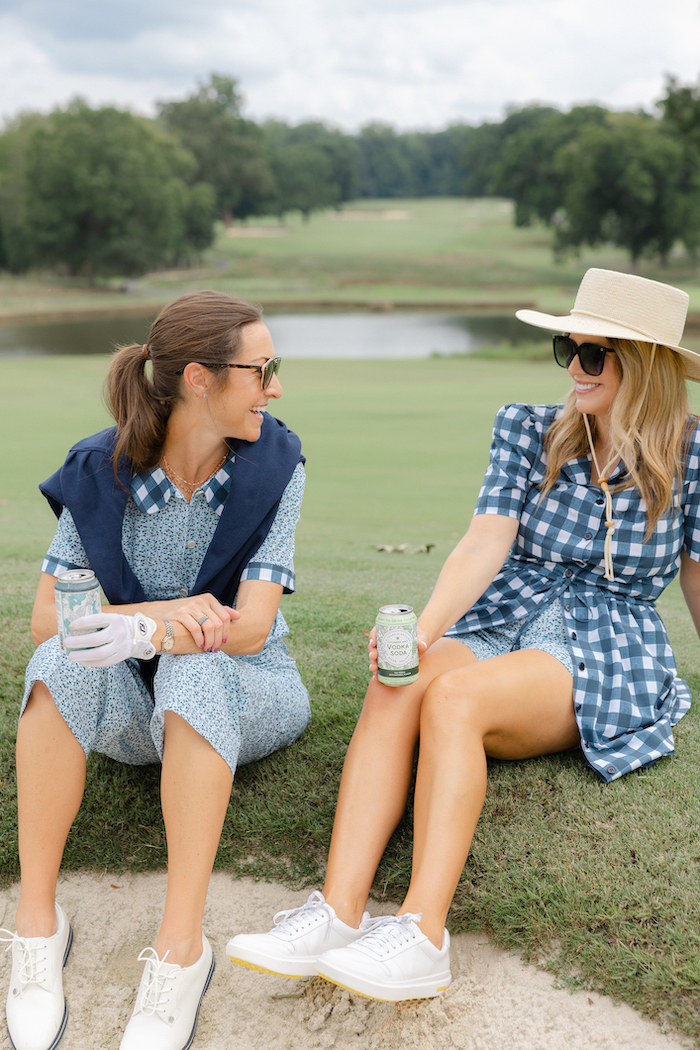 What hardcore golf fans will notice: Quail Hollow’s famed Green Mile — holes 16, 17 and 18 — are renowned as one of the toughest three-hole finishing stretches in all of golf. But course management team rerouted those holes to be 13, 14 and 15. 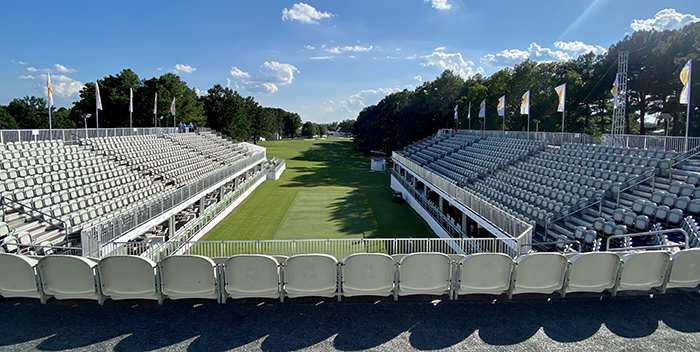 A stadium that can accommodate around 2,500 fans was constructed for the Presidents Cup first tee. Photo: Ashley Mahoney/Axios

Of note: HBCU golf kicked things off on Aug. 29 at Quail Hollow Club. Johnson C. Smith, served as the host university, along with five other programs will compete in the inaugural Charlie Sifford Centennial Cup.

The Presidents Cup donated $25,000 to each HBCU program who competed in the inaugural event.

Flashback: Sifford, a Charlotte native, was the first Black person to play on the PGA Tour, desegregating the sport in 1961. A Presidential Medal of Freedom recipient, Sifford died in 2015 at age 92. 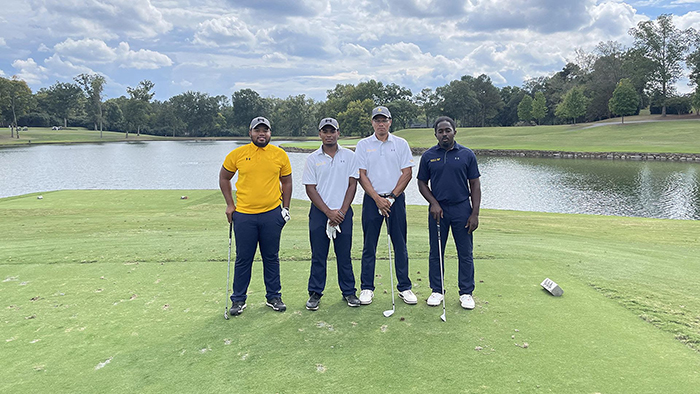 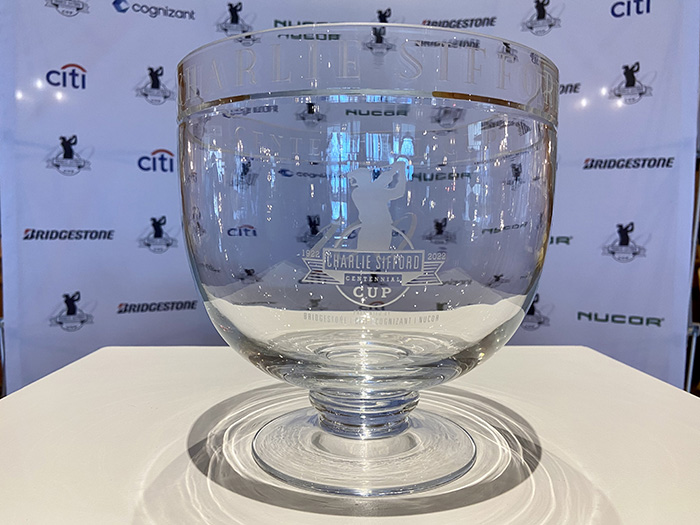 What to expect on the course: The Presidents Cup is a biennial competition between teams — the U.S. vs. an International squad with players representing countries all over the world with the exception of Europe.
It’s similar to the Ryder Cup, which also runs every other year and pits the U.S. against Europe.

How it works: Qualifying ran through the BMW Championship, which ended on Aug. 21. Each team will have 12 players, and the U.S. team heads to Charlotte as the defending champs. On the teams so far:

The intrigue: The Saudi-backed LIV golf league caught the attention of the world as players followed their wallets, and on June 9, PGA Tour commissioner Jay Monahan released a statement suspending LIV players from PGA Tour tournament play, including the Presidents Cup.

By the numbers: The Presidents Cup doesn’t include prize money. Instead players allocate an equal portion of the money generated from the event to a charity of their choice, and they’ve raised $54.4 million total, including $5.3 million in 2019.

Zoom out: Charlotte traditionally hosts the Wells Fargo Championship at Quail Hollow Club each spring, with the exception of this year in preparation for the Presidents Cup. But Charlotte’s moment in the sun came in 2017 when it hosted the PGA Championship for the first time. 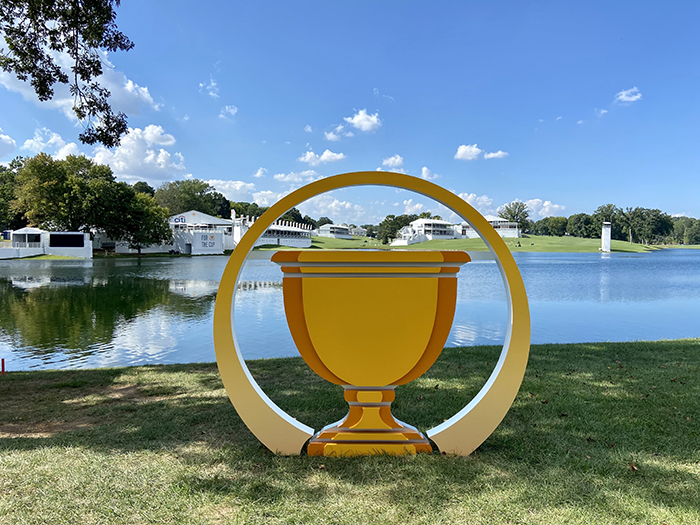 Editor’s note: This guide was originally published on June 17. It was updated on Sept. 20, and will continue to be updated. 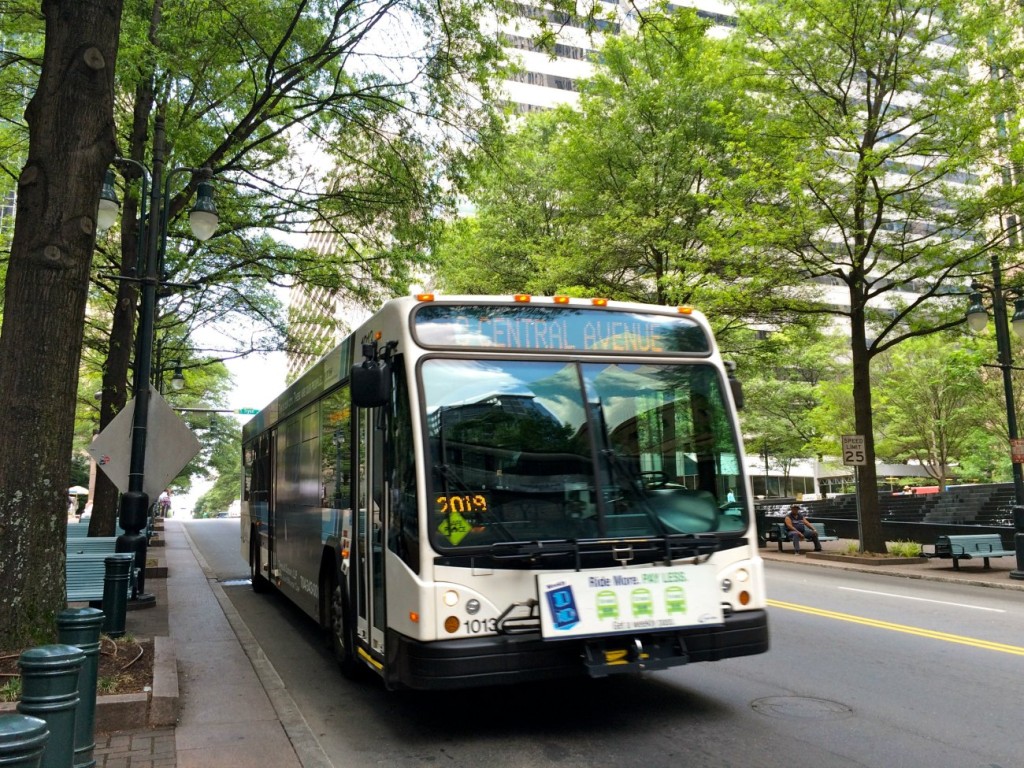 A timeline of the Charlotte Area Transit system’s woes