‘To live another day’: Survivors want to make it easier to report domestic violence in Charlotte 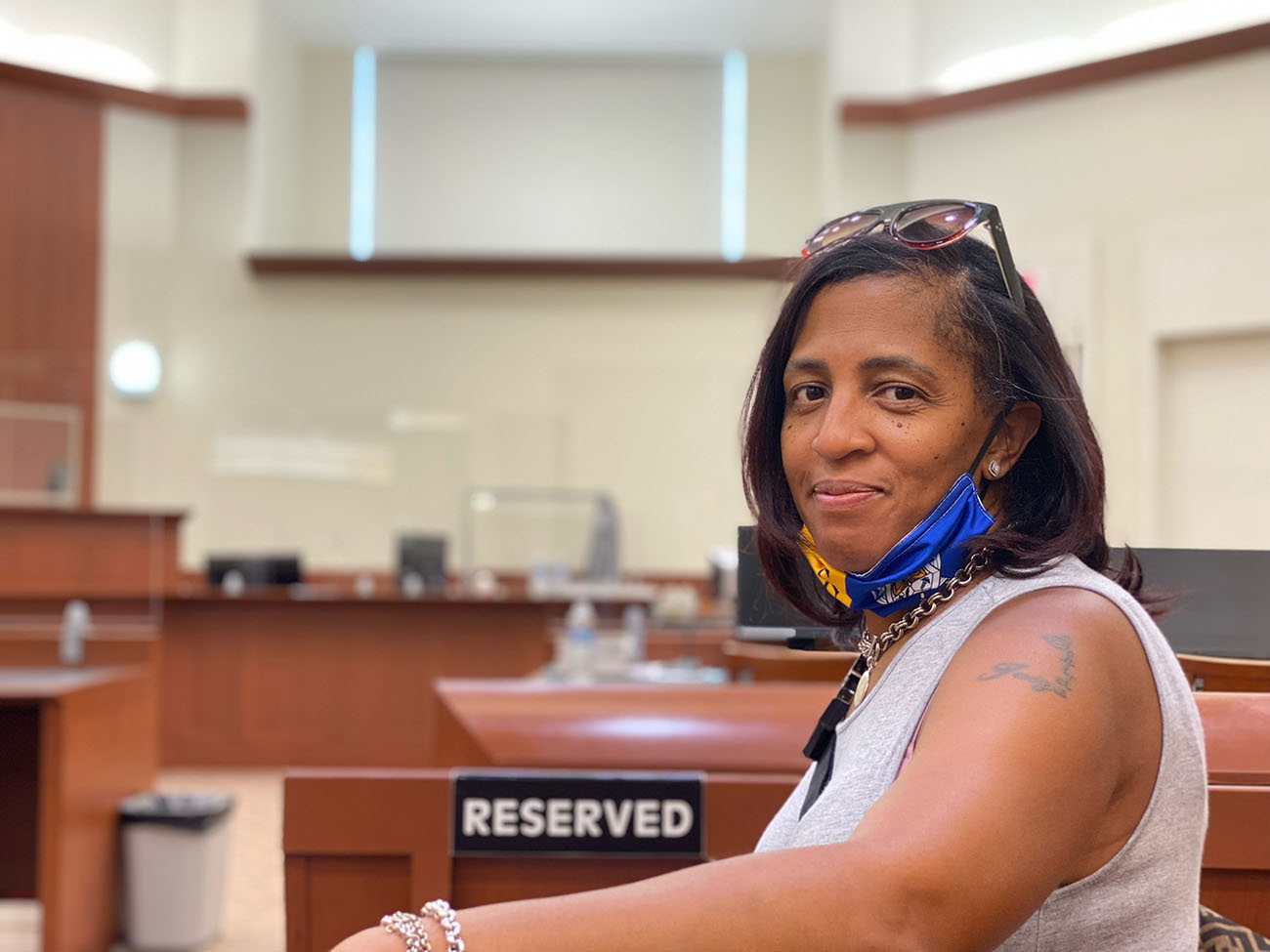 Rashida Gittens has been an advocate for people enduring domestic abuse for years. Photo: Michael Graff/Axios

Rashida Gittens is walking me, step by actual step, through her story of escaping domestic abuse, when she turns a corner and sees the magistrate’s window. She shivers and wheels away as if she’s seen bucket full of cockroaches.

“I’m getting goosebumps,” she says.

Gittens considers herself lucky now. After nine years of abuse, she’s been safe since September 2009. But she knows many others aren’t. So she does this walk and shares her story with anyone who’ll listen, hoping to make it easier for the next person.

Why it matters: Domestic violence, which has trended in the wrong direction since the start of the pandemic, is difficult to escape anywhere. But that’s especially true in Mecklenburg County, where people have to walk multiple blocks and tell their story multiple times — to get a warrant, to get a protective order, to get a court date, to get a verdict and freedom.

What’s happening: Three organizations want to make the process smoother. Safe Alliance, Pat’s Place (a child advocacy center) and the Jamie Kimble Foundation for Courage want to establish a Family Justice Center, which many cities around the country have, to put all of the resources in one place, so that people only have to tell their story once. 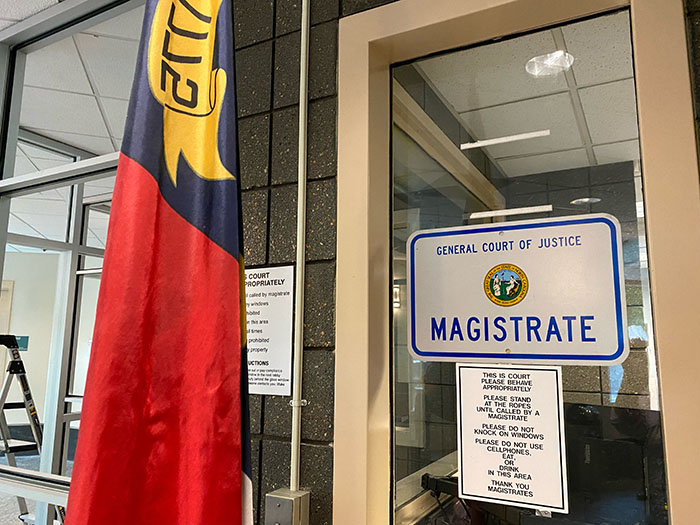 Context: Mecklenburg County saw an uptick in domestic abuse reports during the pandemic, and 2021 has been even more brutal in some ways.

More worrisome, advocates say, is that there’s no way to know how many more don’t report or follow through.

Resources are scattered around Uptown, and often the waits are so long that clients have to leave before they’re finished.

“If their kids are getting off school, people are like, ‘Oh well, whatever. I’m leaving,’” Gittens says.

The big picture: The issue of hesitancy to report goes beyond domestic violence between partners. CMS is receiving national scrutiny after multiple reports from sexual assault victims who say administrators dismissed their claims.

Between the lines: People do have more options now than last year. The Survivor Resource Center opened in early 2021 on the fifth floor of the Children and Family Services Center building in Uptown.

The full Family Justice Center would cost about $35 million. The three nonprofits propose that $15 million come from their own fundraising, and $10 million each from the city and county.

There’s evidence the money is worth it, advocates say.

The big picture: One of the biggest proponents has been Mecklenburg County district attorney Spencer Merriweather, who’s been talking about building one since before he was in office. It was a huge part of my first interview with him in 2018.

Merriweather goes into his office each Sunday. Invariably, he says, he’ll see a person in a car with visible signs of injury, wondering how to get to the magistrate’s office, or just where to go first.

The bottom line: Government and lawmakers may have legal reasons for establishing steps for reporting these crimes, but it’s simply not intuitive to know the ins and outs of bureaucracy when you’ve just escaped an abusive incident. 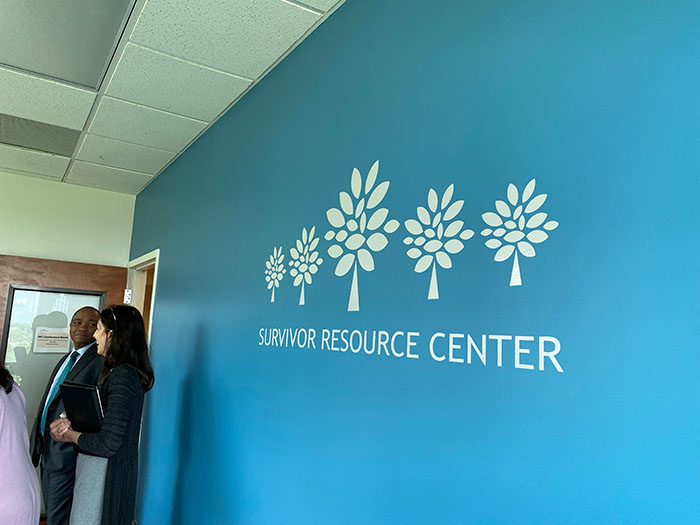 Survivor Resource Center is a temporary version of what officials hope will be a permanent family justice center. Photo: Michael Graff/Axios

1. Deciding to report, and finding the time and strength to do it.

I meet with Gittens and Journey, along with Parker, on Fifth Street outside the Survivor Resource Center.

It’s been 12 years since Gittens went from victim to survivor, but immediately she slips into the role, talking in the present tense.

“I really don’t know what my next step is — I just know that being in a house is not safe for us. Last night maybe was the last straw. I have on my sunglasses because I have a black eye but I don’t want you to see it.”

Journey flicks at her phone while she does this. Her mom doesn’t break character.

“Her phone is her security. I am on a quarter of a tank of gas. We were in a rush. I’ve made her scarf down food. I don’t have any money on me. I don’t have anyone I can call to borrow money from. … All I know is that if I go back, there’s a chance I won’t live to see tomorrow.”

She’s talking like this, it’s clear, because she wants us to know you can’t understand the mentality of a victim without attempting to don the straitjacket of abuse.

Gittens’ father abused her mother when Gittens was a young girl. When she found herself in a similar situation, Gittens vowed to end that cycle for her daughters. (Her older daughter is now in her mid-20s now and saw the worst of it.)

She was afraid to call police. She’d heard stories of women who’d phoned 911 only to wind up arrested themselves. But more than that, her abuser had told her that if she called police he’d killer her.

At some point, Gittens had a dark thought: “I started planning how I was going to kill him before he killed me.”

“When you’re inside it, your perspective is completely different: The people who can tell you what you should do are not in your house when you’re sleeping and he’s watching you and standing over you, threatening phone calls,” she says.

“We’re not stupid. We’re just trying to figure out how to live another day.”

By now on our walk we are at Fourth Street, about to turn left toward the jail. Still today, a dozen years after she last endured domestic abuse, she still looks around the corners to see if he might be lurking.

Merriweather, the DA, has joined us now as we walk toward the magistrate’s window Gittens can’t stand. He explains why it’s so cold here. The magistrate is a judicial official trying to establish probable cause for a warrant. So even the most empathetic magistrate can offer little in the way of comfort.

“It could be that the bruises from whatever interaction that they have are still coming to formation,” Merriweather says. “(But) it’s not (the magistrate’s) job to be part of the investigation. It’s not their job to be investigating.

We leave the window and walk down the gray hallway and out the jail doors, then head across Fourth Street to the Victim Assistance office — in a different building and around a bunch more corners.

This is where Safe Alliance helps victims determine whether they have enough evidence to file a protective order, and helps them file the paperwork.

We then head into a hallway that leads to the room where abused people appear before a judge virtually. The judge issues a protective order, or doesn’t. In any case, the person likely will have to tell her story all over again.

We leave Victim Assistance and step toward the courthouse. Merriweather points out another flaw in the process here: The probation office is next door to Victim Assistance. Often abusers and the people they’ve abused are separated only by the exterior walls of the building.

Finally, we step into the courtroom. By this point — in reality it would be days or a week later — a person trying to escape could have changed their mind about sharing their story.

In the places around the country that handle domestic abuse best, a district attorney’s representative will be here to take down all of their information. But Merriweather says the Mecklenburg DA’s office doesn’t have the resources for that, so they often lose days or weeks in between. Often, enough time passes that a person is no longer interested in testifying, and the cycle continues.

Merriweather says he has nights he’ll be at home with the news on, and he’ll hear of a homicide involving a domestic violence situation.

“And you have to look up to see whether or not you potentially dismissed a case because you couldn’t proceed,” he says. 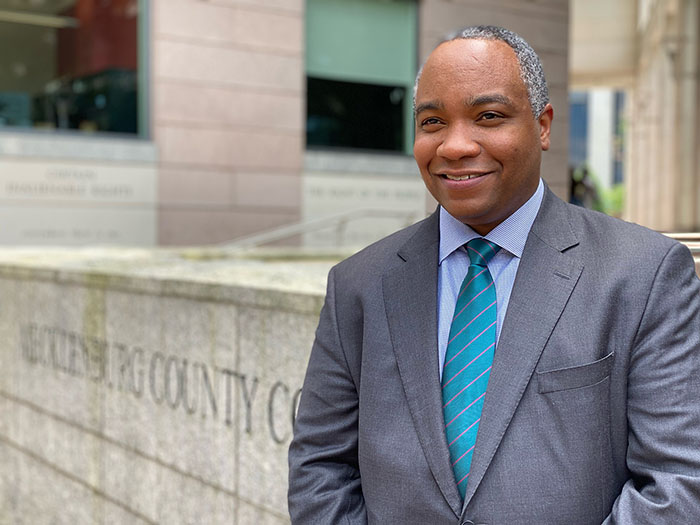 As we sit in the empty courtroom, Gittens knows she could’ve been one of them. But then she finishes her story.

“The straw that broke the camel’s back was the very last time that he pistol-whipped me,” she says.

In the weeks between filing the complaint and the court date, he called. He texted. He threatened. He stalked her at church. Gittens found slits in the blinds he’d cut out so he could look in.

But five weeks after she left him, the threats ended, and she and her children were free.

Still today she wonders, if the process of ending it was easier, how her life would’ve been different. Sitting in that courtroom, she looks at the rows of seats. She can picture where he was the last time she saw him.

As we walk out of the courthouse and back toward the survivor resource center, retracing our steps, we pass by the jail, where the magistrate’s office is, and that window she can’t bear to look at.

She remembers one thing vividly: It was loud when she went to file her report, and people were in the waiting area, watching as she tried to explain her story through the glass. And she’ll never forget that the person on the other side said some version of: “I can’t hear you. Can you say it again?”

She hopes the next person only has to say it once to be heard.

Editor’s note: This story was corrected to show that the private fundraising total for the Family Justice Center is $2.8 million, not $2.2 million. 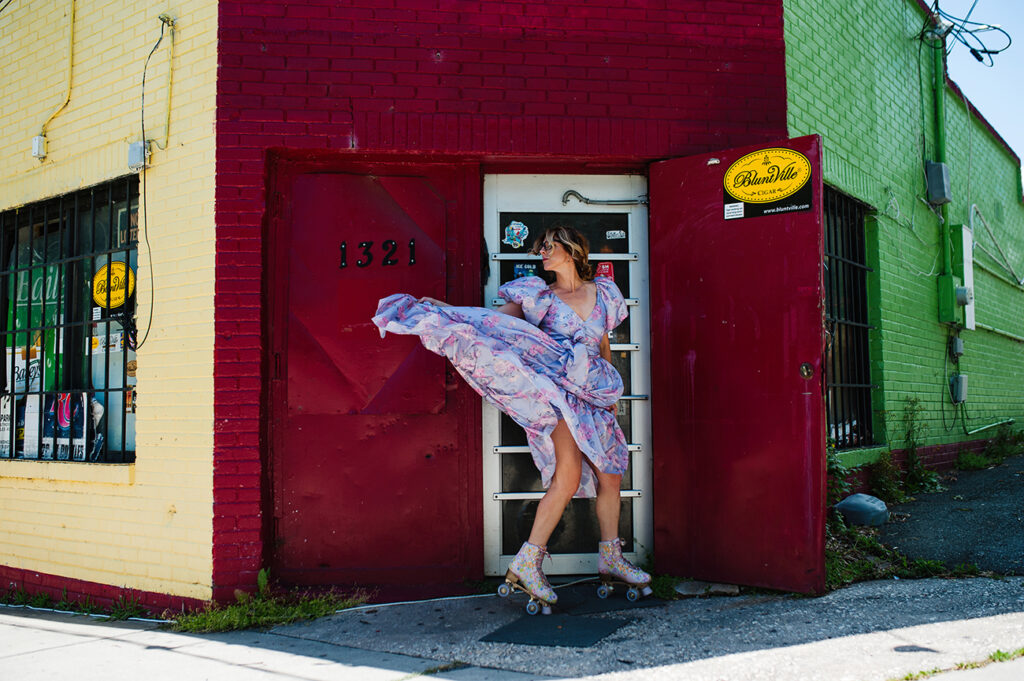 How it started: With personal stylist and style editor Whitley Adkins