Tyber Creek Pub will close, then be reborn in a new development on the same property 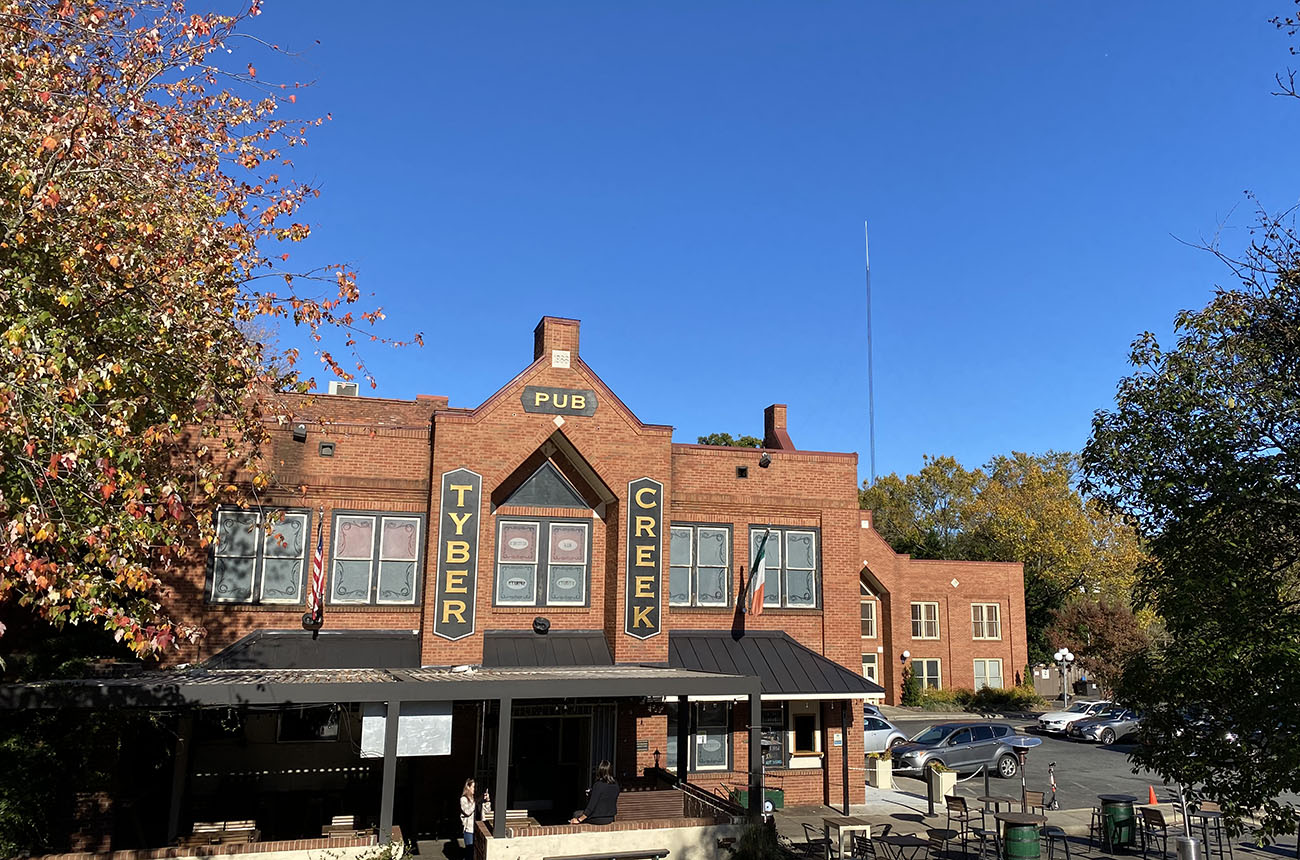 Another perfect pint of Guinness settled into a glass on the Tyber Creek Pub bar Monday afternoon, bubbles of tan giving way to black. The whole process still hypnotizes Tommy Timmins, almost as if he’s staring at a snow globe of his life.

All around this South End Irish pub are memories: The black-and-white photo of him and his brother with their dad, a former New York City cop-turned-bar-owner.

Tommy owns Tyber Creek with business partners Maynard Goble and Kevin Devin and they own not just the business but the building. That last part is crucial in this neighborhood where the dirt you stand on is now worth more than any number of beers you can imagine slinging.

Tommy gets asked to sell multiple times a month.

They could do that, and the numbers may even say they should.

But they’re still of the mind that a bar isn’t as much about filling their pockets as it is giving people a warm place to be.

So he turned away offer after offer, until one finally came in that allowed the Guinness to keep pouring.

What’s happening: Nashville developer Southern Land Company, whose catchphrase is “artistry in development,” will spend the next couple years reshaping the lot on the corner of Tremont and South Boulevard. They’re raising the earth to street level, then building a mixed-use high-rise with 300 new luxury apartments on a single acre.

That’s to be expected — every piece of property in South End is a developer’s dream at this point. But what’s different with this project is that the announcement of what’s to come isn’t also a funeral for what’s passed, as so many others have been.

Tyber Creek, a pub with 22 years of memories soaked into the pine paneled walls, will live on, just in a new form.

The developers are carving out 4,500-square-foot shell for a new Tyber Creek on the street level.

Oh, and they’ll still own it, pub and space. That part was non-negotiable.

“If I had any reason to cash out and go, that was the time, with the pandemic and everything,” Tommy says. “But I believe in Charlotte. I believe in South End. I believe in this industry, is what it is. … 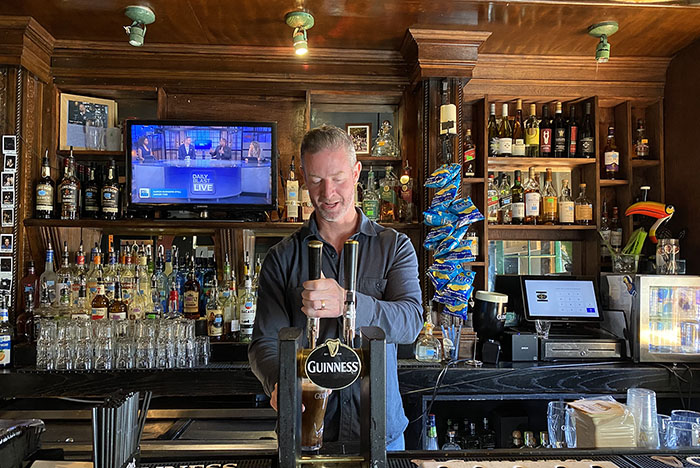 Tommy grew up in a bar, pretty much.

His father served nearly 30 years in NYPD. Then he gave that up and opened a neighborhood pub called the Sugar Bowl in Breezy Point in Queens. They were only open from May through September each year, and Tommy grew up sweeping floors, wiping counters and watching people be sinners and saints.

The Catholic school kid moved to the Charlotte area in 1994 and enrolled in college at Belmont Abbey in Belmont.

It was a good time to be here. The Hornets sold out every night. The Panthers were just starting up.

Tommy and his friends drove into the city on weekends to party, and they dreamed a dream that damn near every person from their generation dreamed: What if we owned a bar? 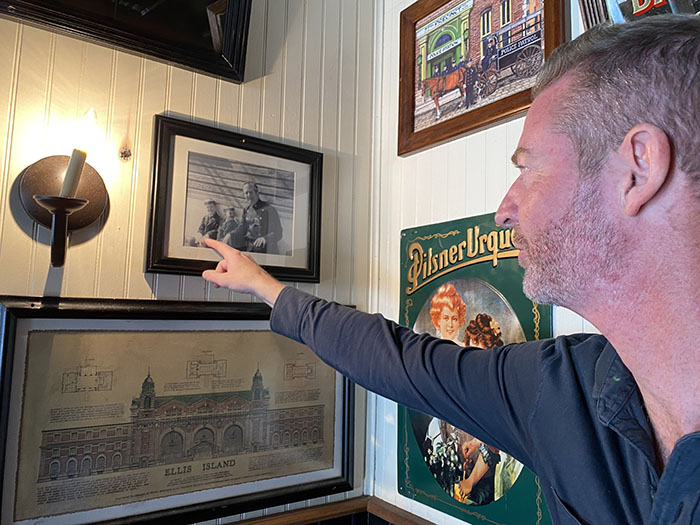 Tommy Timmins points to a photo of him, his brother and their dad. Photo: Michael Graff/Axios

Tommy couldn’t let it go, though.

During his junior year, he called his parents and told them he’d discovered his life plan. His father approved. His mother was silent; she figured he’d go to med school or something. Still they asked him what he needed.

Not much, he told them. Just a few months’ rent to help him live here while he found a place and secured a small-business loan.

Then, one day his phone woke him up: A friend was calling him to say that the property at Tremont and South was open. 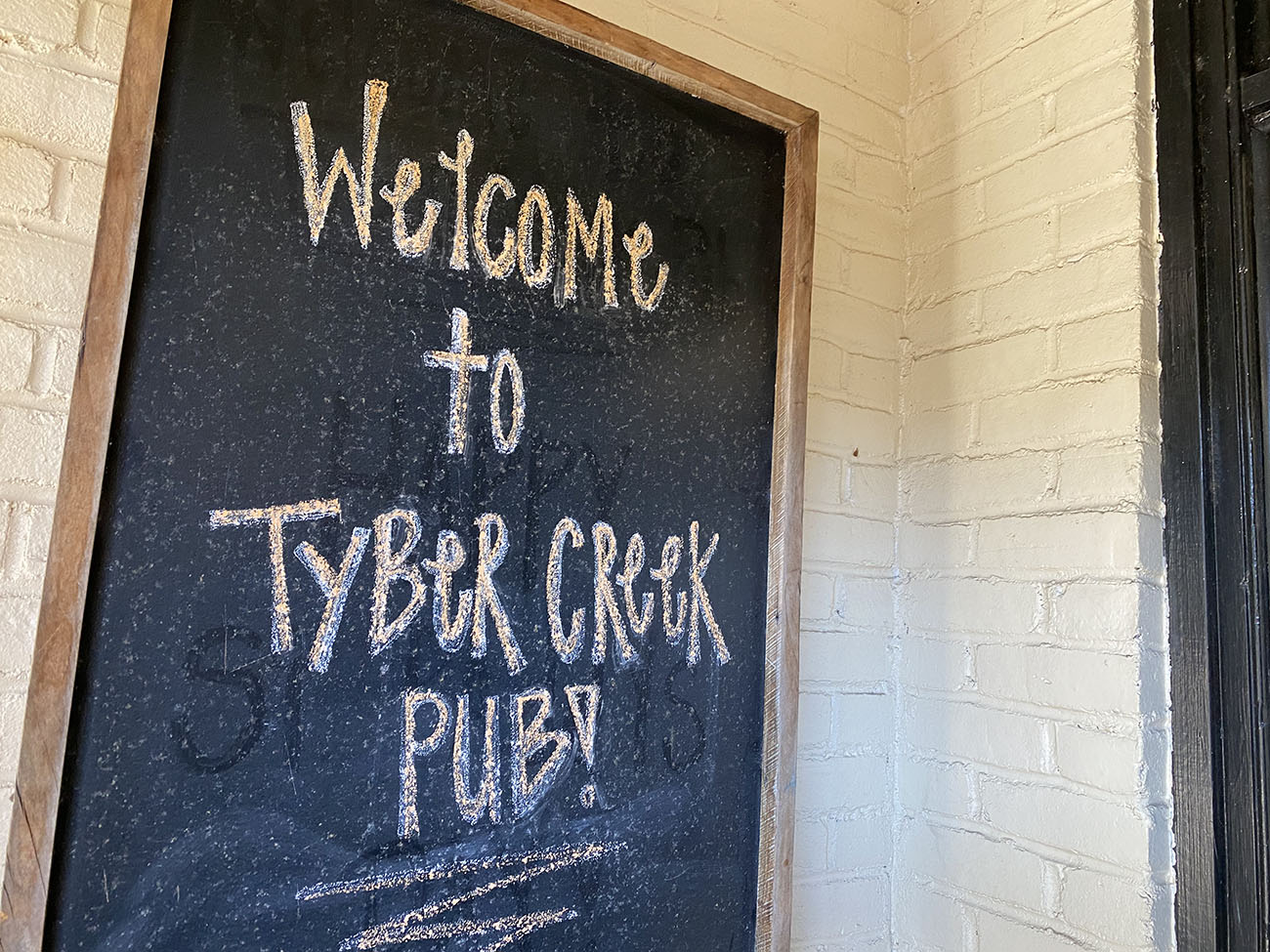 The state of play: South End then was hardly South End now. It was an offshoot of Dilworth. No light rail, very little nightlife, certainly no 23-story Lowe’s tower.

But Tommy and his initial partners, including Dan McNally and Tim Krott, believed in the neighborhood’s future.

Many of the small houses in Dilworth (yes, those existed) were rental homes filled with 20-somethings just getting their starts, and slowly they started filling the bar.

That’s a funny thing about owning a bar, where the days are long and the years are short. One day you’re standing around watching people take pictures on disposable cameras, the next it’s all Instagram. 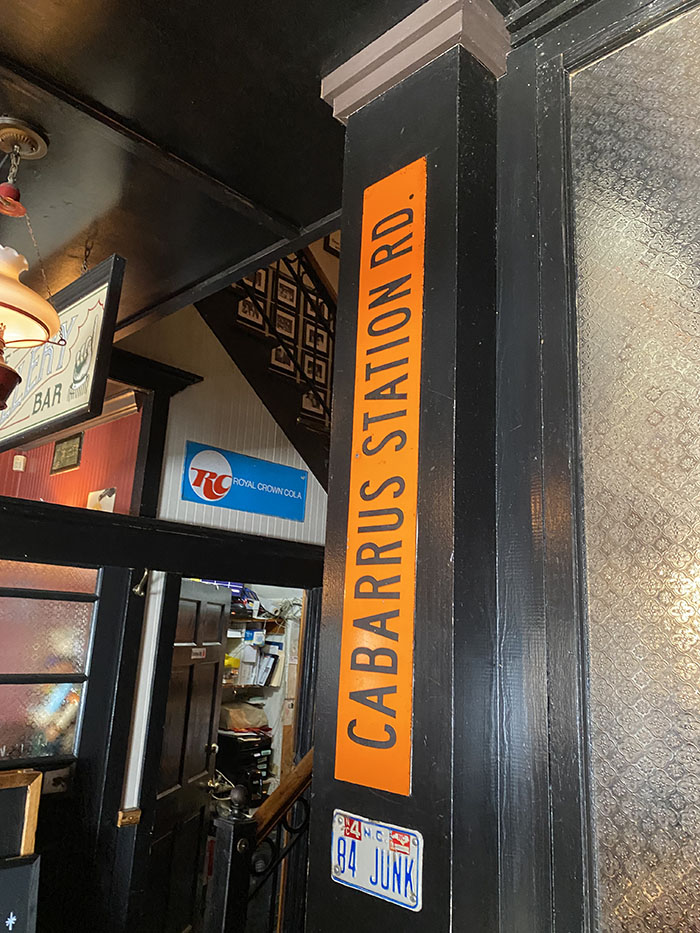 The street sign and license plate, kept from a motorcycle accident that left Tyber Creek co-owner Tim Krott in a coma. But he survived. So the sign goes up on the wall. Photo: Michael Graff/Axios

Tommy’s 45 now and has two kids — a four-year-old daughter named Georgie, after Tommy’s dad; and two-year-old Tommy. They run around this bar like he ran around his dad’s bar in Rockaway.

It’s been that way, like family, since they first put down the wood floors in 1999.

Within a few months of opening, one of the original business partners, Krott, was involved in a horrific accident on his motorcycle. He spent a year in a coma, but he survived. And today he’s still involved in the operation, singing and dancing and helping out with big events.

A couple years later, one of the bar’s regulars, a Irish-born Kevin Devin, joined the ownership group. They opened Connolly’s in Uptown. (Now they own Dandelion Market, the Daily Tavern, Workman’s Friend and Prohibition.)

In 2001, Tommy learned his dad had cancer and the staff and patrons rallied up so he could take as many trips to New York as he wanted. George Timmins died in December 2002.

In Charlotte, they were part of a group of mostly Gen X restaurateurs that transitioned the city from a sleepy Southern town that closed up at 5pm to the one you know today.

Yes, but: Tyber Creek will always be “the first born,” as Tommy calls it.

And it came as dual forces of a pandemic and relentless investment sent old restaurants falling like dominos.

Each one produced a similar parade, people lined up around the block for one last burger or one last quarter-chicken dark, and the chorus of dismay on social media about Charlotte “lacking history,” or how “we have to save these places.”

While all that was happening, Tommy was growing to like the folks at Southern Land Company, and growing to trust that they wanted to make something interesting, not just another box for people to “live-work-play” in.

He negotiated. He worked it out with his staff, many of whom have been with him for a decade or more, to shift into their new roles. He started to think about what it might look like, feel like.

He worked it out so that Tyber Creek could stay open until the last possible moment before construction starts.

They’ll get about 60 days notice, he says — plenty of time to wait on a few more perfect pints. 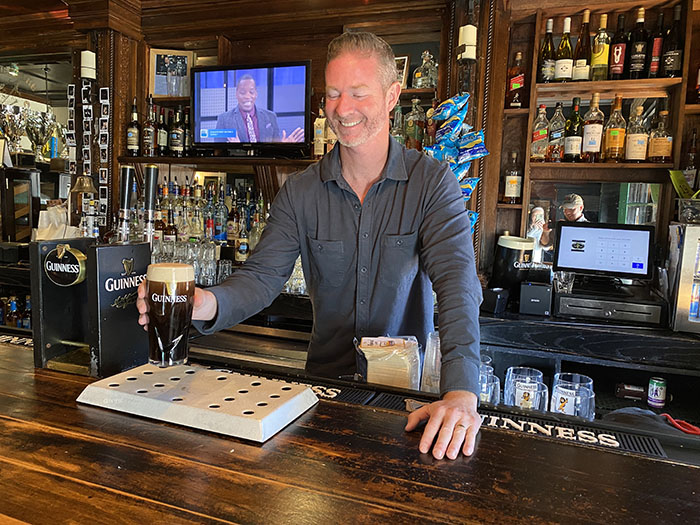 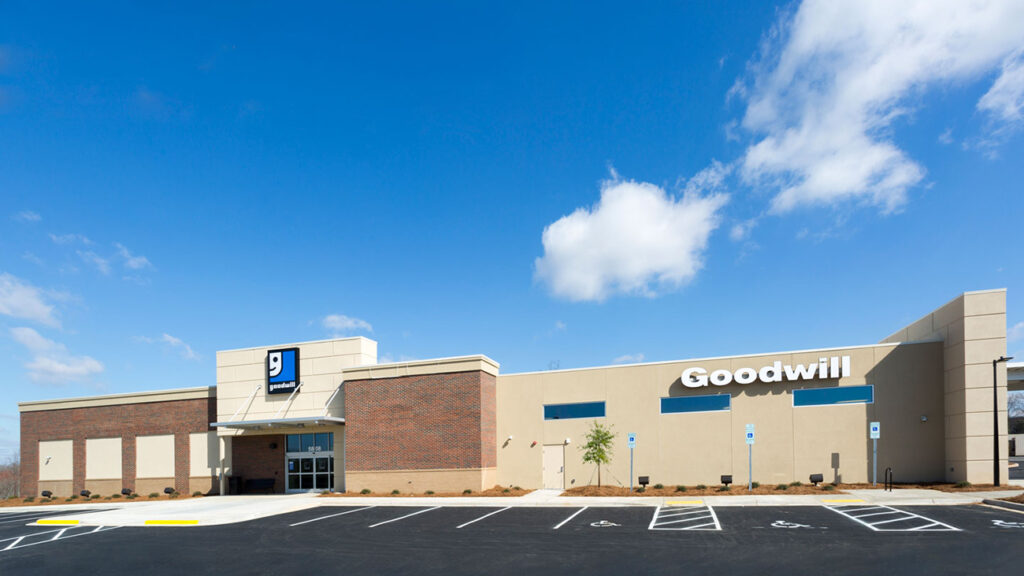 Goodwill is more than just a thrift store. Here are five reasons why