8 tailgate spreads worth copying this Sunday 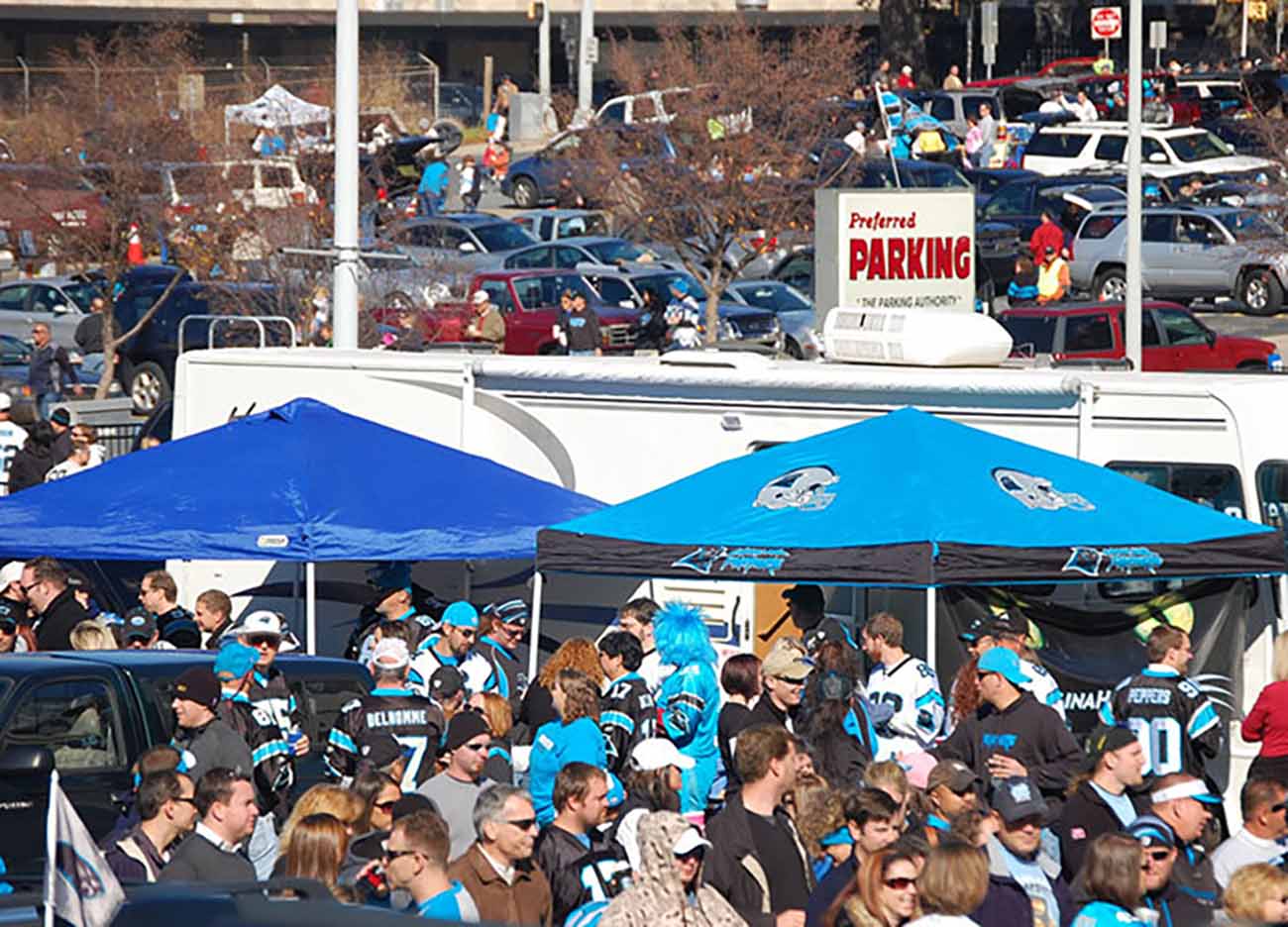 Tailgating is an integral part of a fan’s football experience. It’s more than just getting drunk in a parking lot: Firing up the grill, cracking open a cold one and playing a few rounds of corn hole build a sense of community among fans as they get hyped to see their team play.

On home game Sundays, Panthers fans start filling the lots on Mint Street as early as 8 or 9 a.m. By 11, the parties are in full swing with music blasting, fans high-fiving and tons of food adorning card tables. And we’re not just talking your standard, run of the mill cook-out fare or fried chicken takeout (although a perfectly grilled hot dog or a Big Bo Box of crispy chicken and all the fixin’s are excellent football go-tos).

Go @panthers! Never too early to get the tailgate going…

These eight tailgate spreads will have you pumped up (and mouth watering) for Sunday’s game. 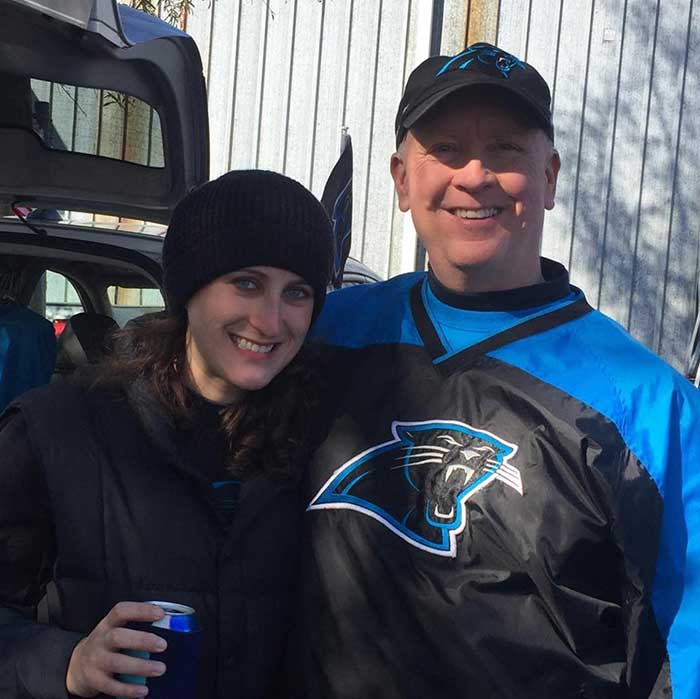 Alan has been a Panthers season ticket holder since day one, and has never missed a home game. He also makes some mean shrimp ‘n grits that are practically famous. 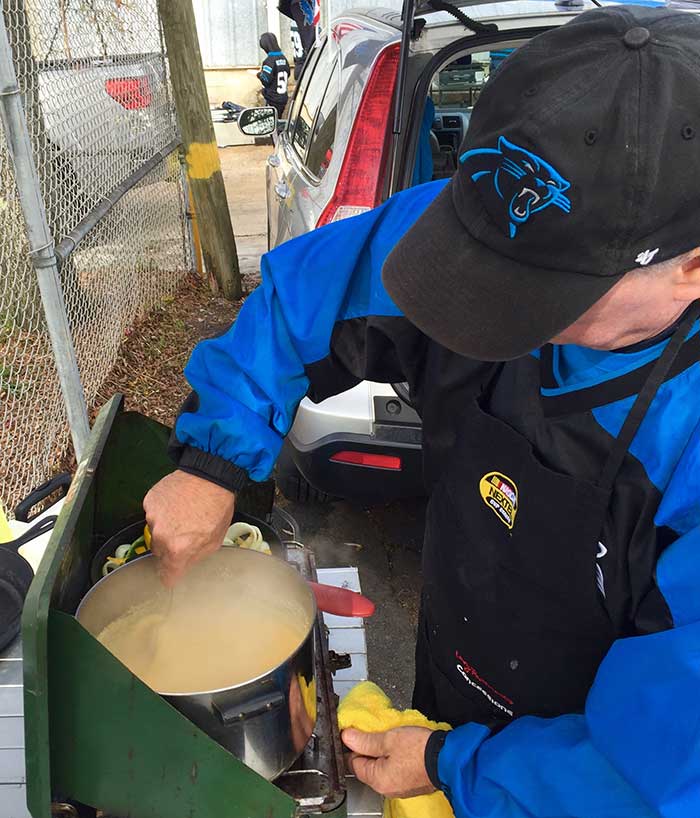 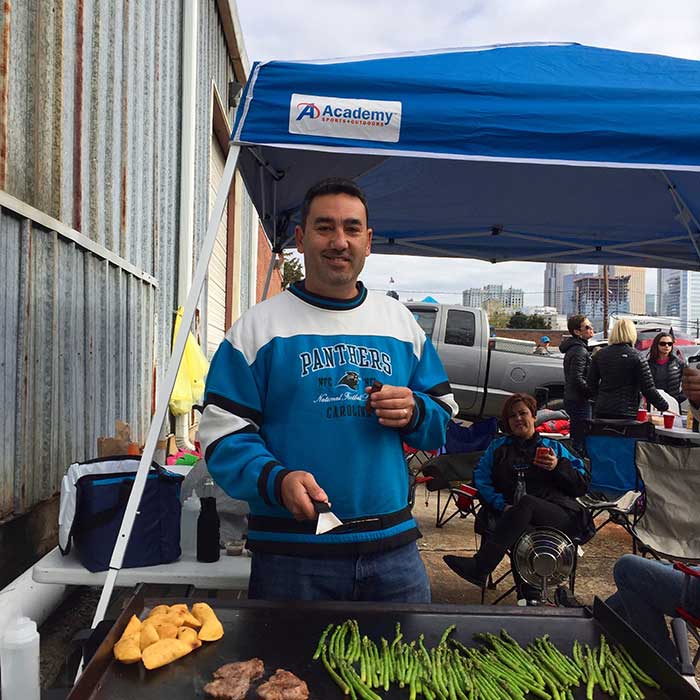 Mark has been a Panthers season ticket holder for 21 years, and he and his friends have a very impressive tailgate setup, including a big flattop grill and a TV running off a generator to watch other NFL match-ups. 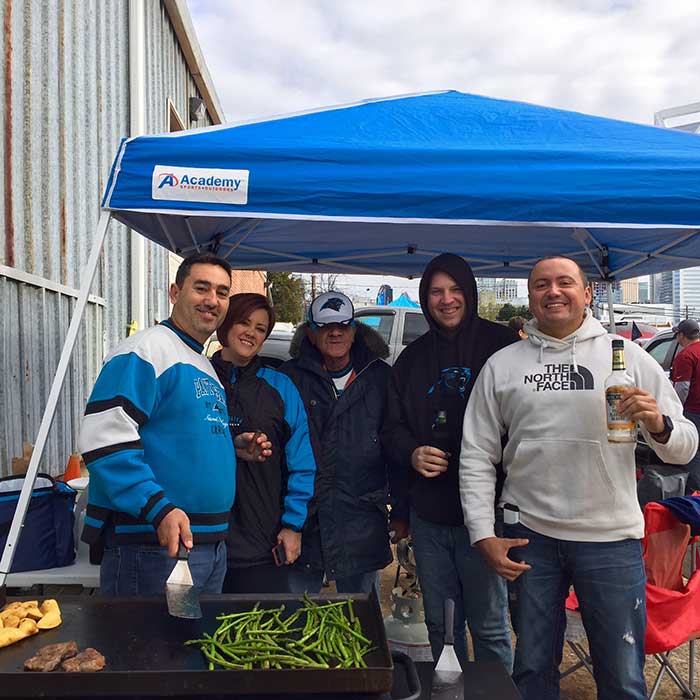 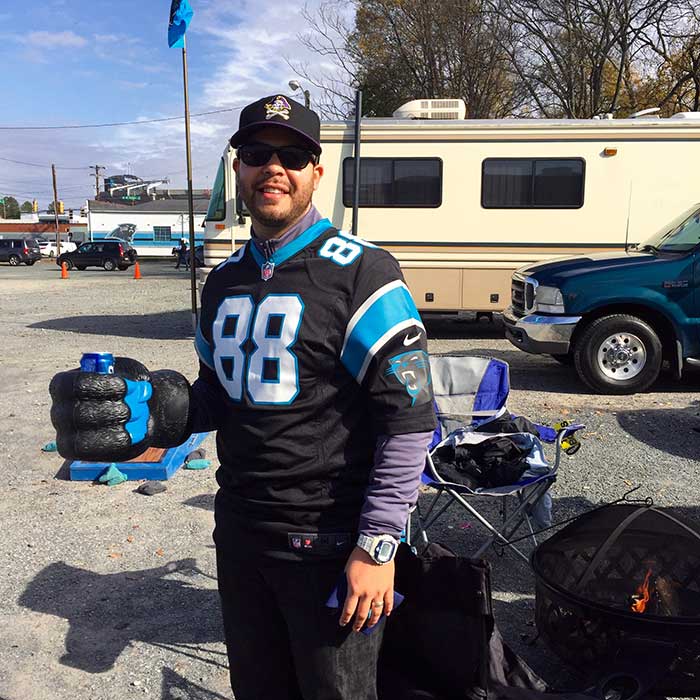 Corey has been a Panthers season ticket holder for two years. He won the giant paw on Twitter a few years ago.

Favorite Player: Greg Olsen
The Spread: Corey and his friends were tailgating around a fire pit (awesome) and had an impressive assortment of snacks. The star: ham and Swiss sandwiches on Hawaiian rolls with onion, mustard and Worcestershire sauce.
Tailgate Tip: Get to the lot early to get a spot, and be respectful (that was a kind tip, Corey). 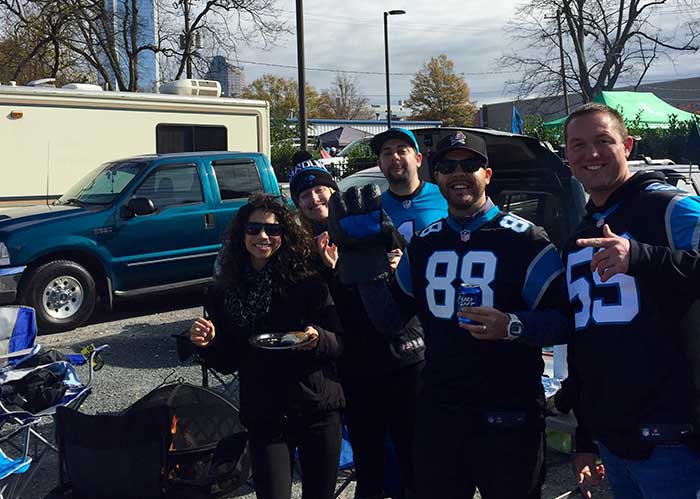 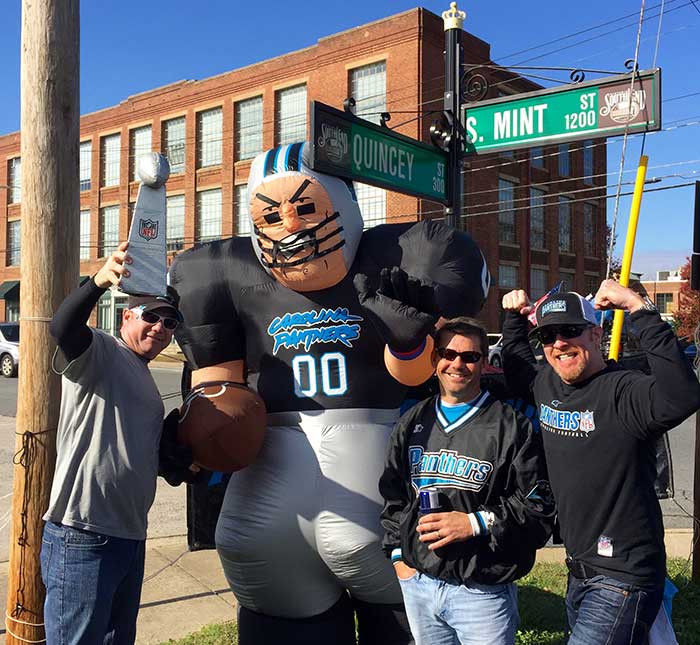 Favorite Player: LUUUUUKE and Sam Mills.
The Spread: Venison sausage (“Isn’t it good? You wouldn’t know it was deer unless I told you!”). Brats, Bojangles’ Bo Box, stromboli, meatballs. The venison sausage was really good.
Tailgate Tip: Arrive early and don’t sell your tickets to the competition. 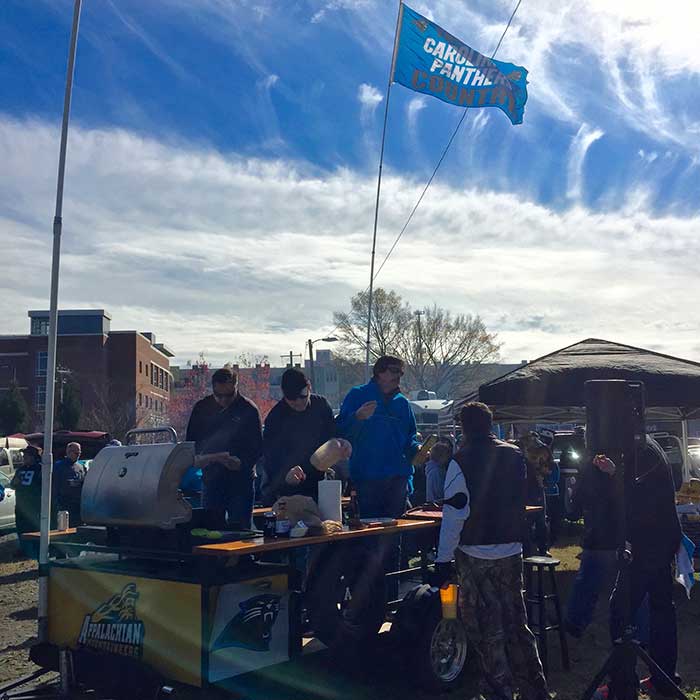 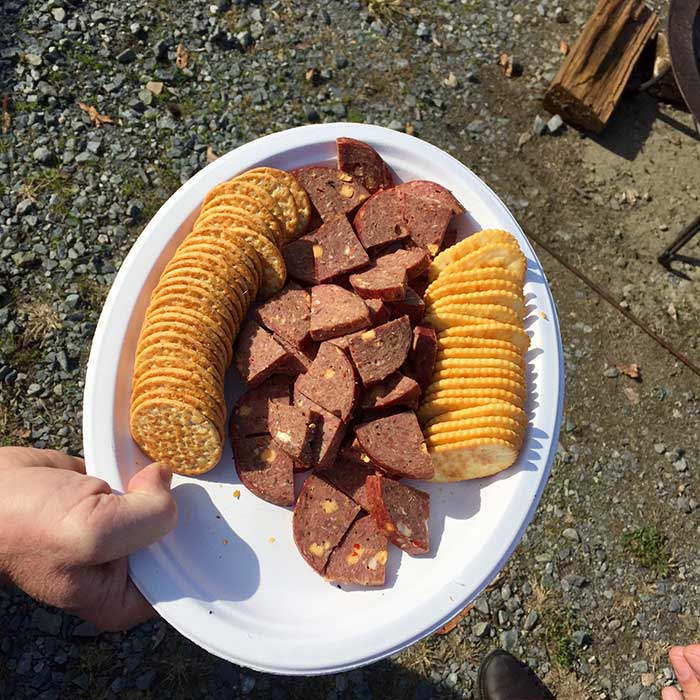 Barry has been a Panthers fan for 12 years, has some impressive fake blue hair and tailgates with an RV called “The Cats’ Ass.” The Cats’ Ass has strict beer rules: The only person allowed to pull a beer from the tap without a wristband is the “Big Cat” Jerry Richardson. 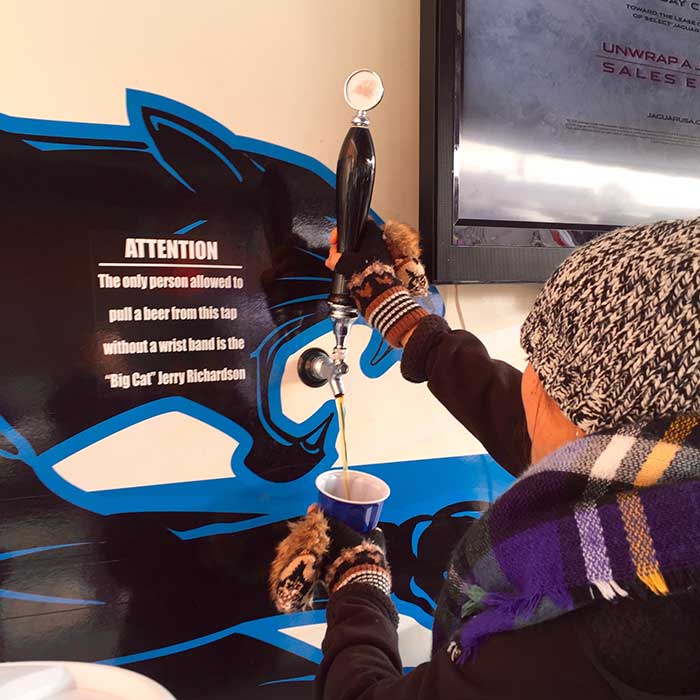 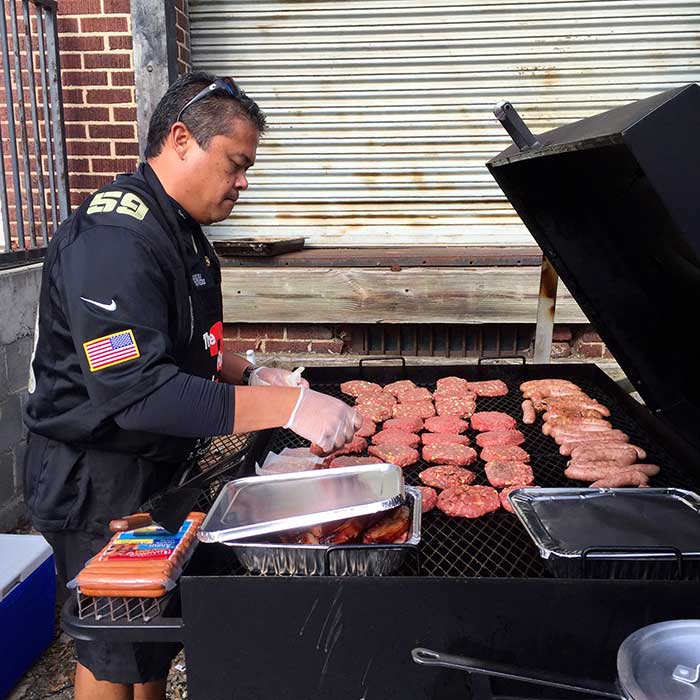 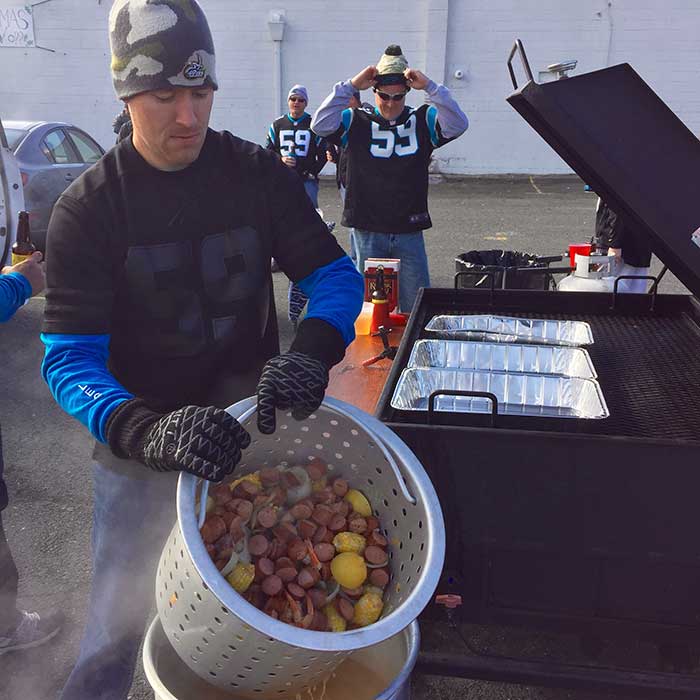 John has been a Panthers fan for 20 years and had a truly impressive setup with a low country boil and full bar in the back of a pickup truck. 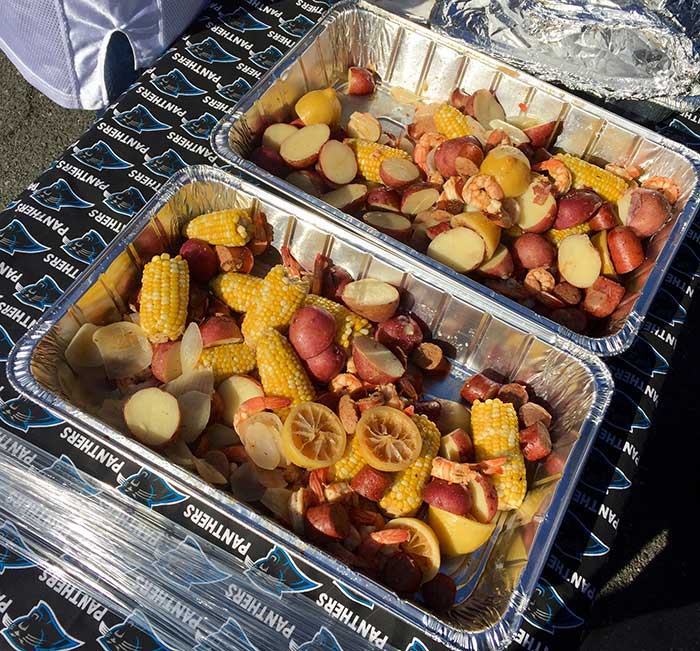 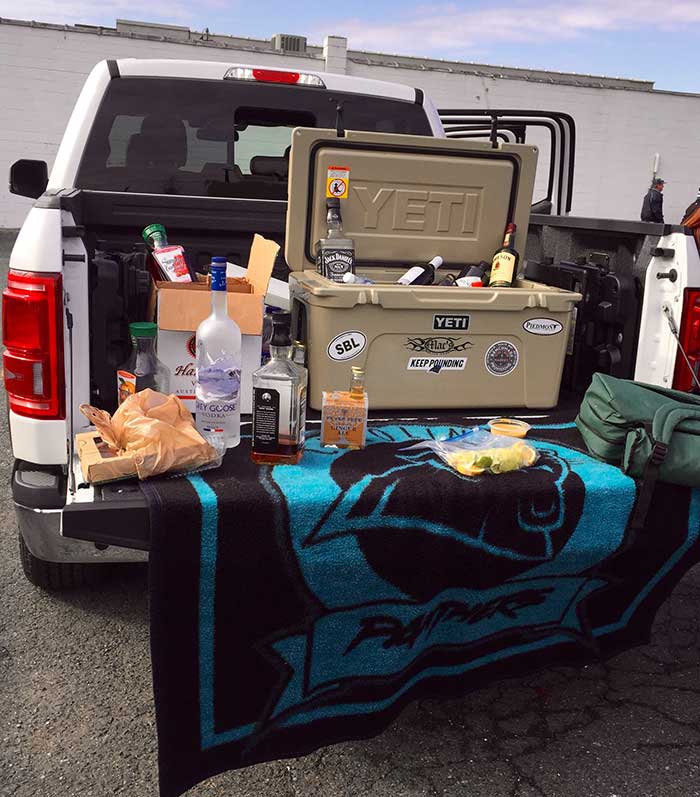 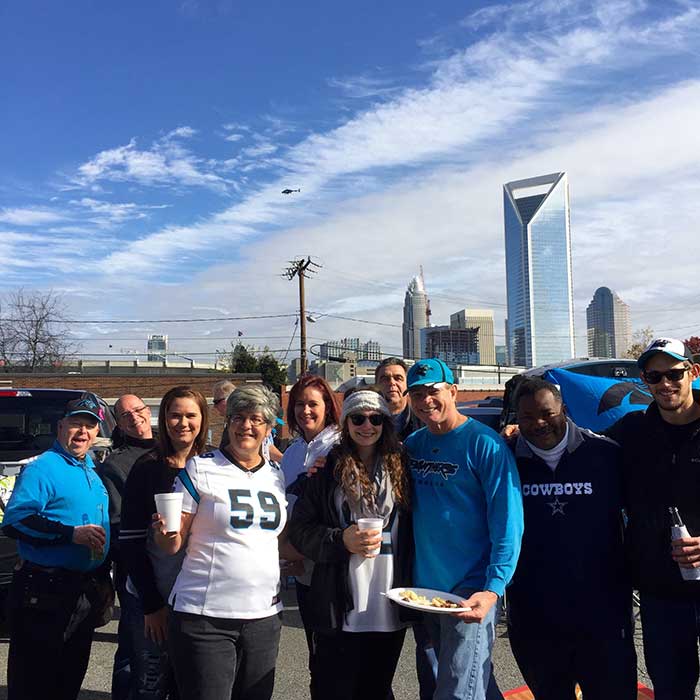 Mike has been a Panthers season ticket holder for 20 years. Each week, his tailgate menu is based on the Panthers’ opponent—he makes gumbo for New Orleans, cheesesteaks for Philly and brats for Green Bay.

Favorite Player: Thomas Davis
The Spread: For Washington Redskins week, Mike was the appetizer guy: He made hot wings, jalapeno peppers and mulled wine. These reflect Washington because “Washington is full of hot air.”
Tailgate Tip: The earlier you get to tailgate, the better. 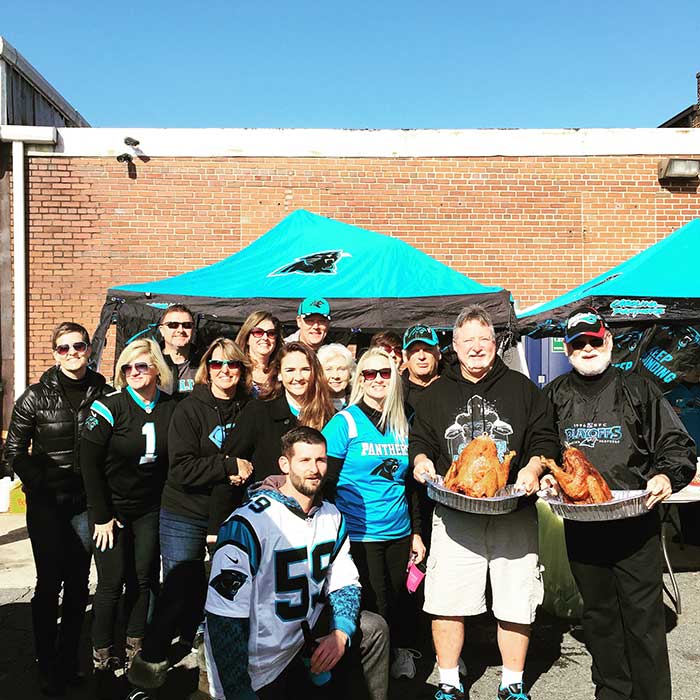 Jack has been a Panthers season ticket holder since 1996. He went to the Panthers’ only Super Bowl appearance in 2003 in Houston. He and his friends drove to Houston from Charlotte in a motor home.

Favorite Player: Jake Delhomme
The Spread: Fried turkey (two of them), and two tables’ worth of Thanksgiving and Southern sides.
Tailgate Tip: Get a good cook. 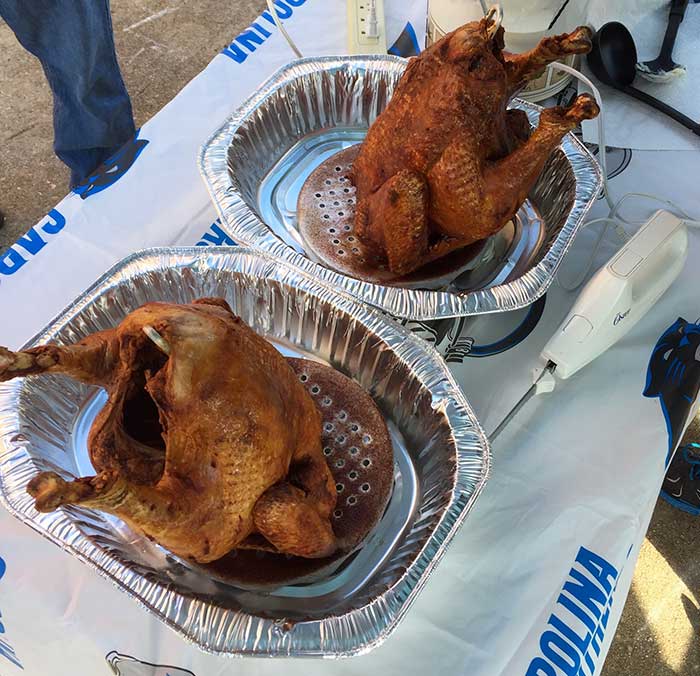 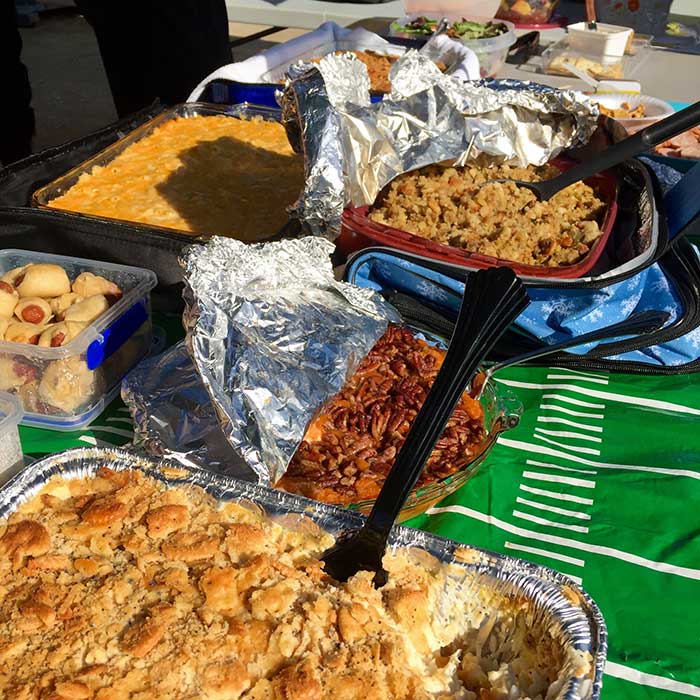 *Barry Sheen is in the witness protection program, a member of the CIA or on the lam. This is not his real name. 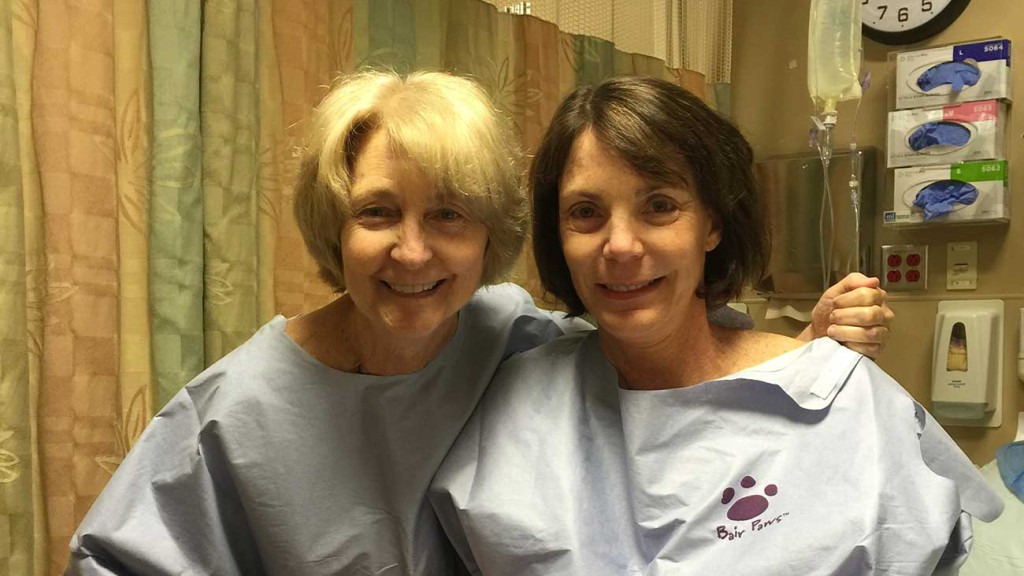 What do you say to your mother-in-law when she gives her kidney to your mom?