Should this 1920s uptown building be saved? 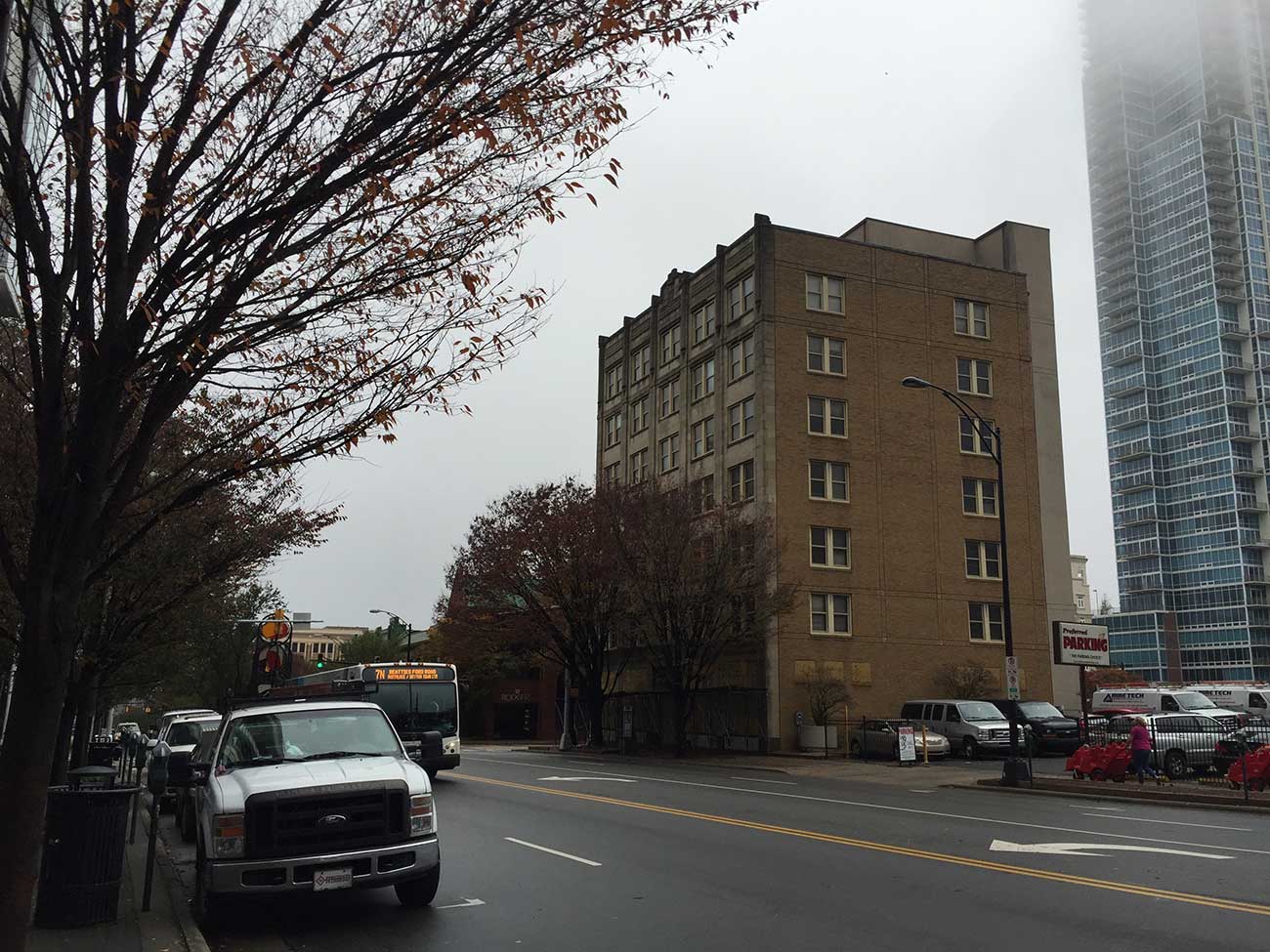 One of Charlotte’s oldest Fourth Ward churches is wrestling with a problem that has no good solution: What should be done with the decrepit 1920s-era building on its land?

Tearing it down removes another piece of history from a city known for destroying the past. Preserving it would cost millions of dollars from the collection plate. 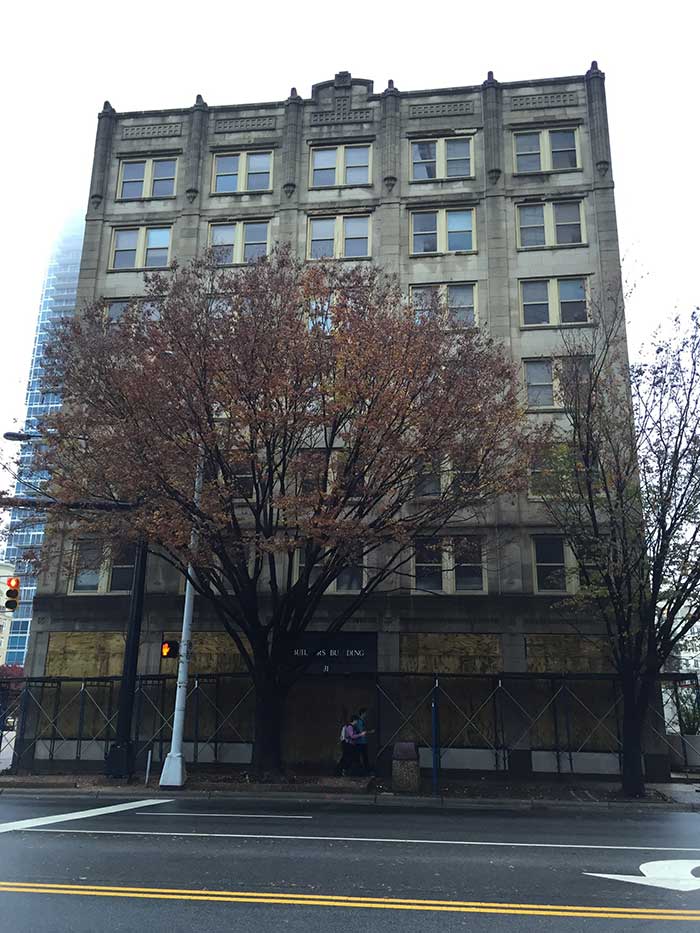 What’s the story behind this building?

The seven-story Builders Building — at 312 West Trade Street — was completed in 1927 and was actually kind of a big deal for Charlotte’s budding construction industry as one of the first attempts at a trade association, according to the Charlotte-Mecklenburg Historic Landmarks Commission. 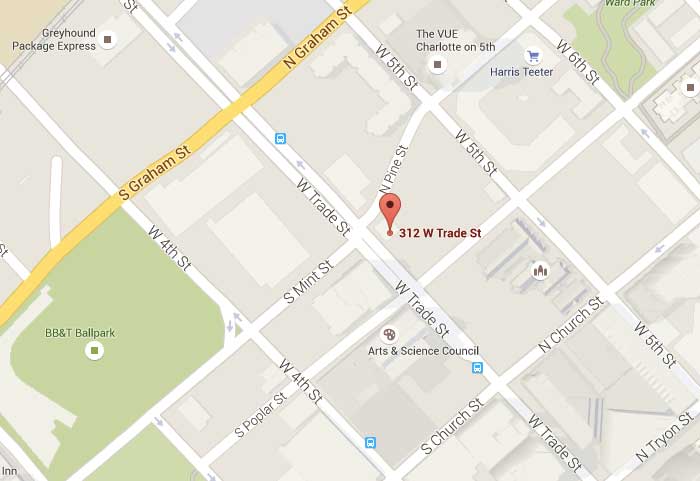 The more recent history is interesting too. In the 1980s, First Presbyterian Church bought the block the building stands on, which is right across the street from the church’s campus. First Presbyterian offered a 30-year lease to an entity known as The Peace Building Inc. in 1985.

Around 2003, the interest in the building was bought by the business partnership of Jeff Feemster and Patrick Cannon, who at the time was a City Council member. They operated their business, E-Z Parking, out of an office there while the extensive surface parking was used for churchgoers.

Cannon eventually became mayor, then was arrested and imprisoned on corruption charges. Feemster died this year of a heart attack.

A few months later, that 30-year lease ended and the building reverted back to control by First Presbyterian. Today, it’s all boarded up and scaffolding on the front protects pedestrians on Trade Street from the decaying facade. 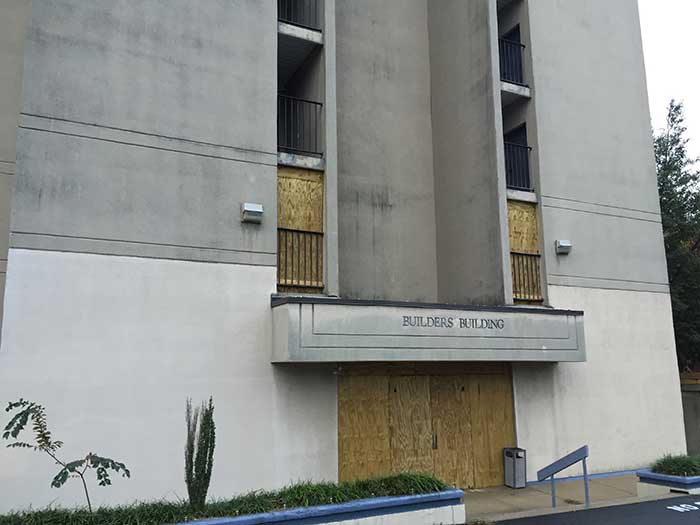 The building is now in a kind of limbo as the church decides the best course of action.

Earlier this year, First Presbyterian submitted an application to demolish the building, citing the severe deterioration on the Tryon Street facade. An engineer’s report found severe and costly damage that would make it impractical to repair.

First Presbyterian offered to put in place deed covenants that would require future development on the land to “reflect the architectural character and heritage” of the former building.

But the church’s plan soon met with opposition from the Historic Landmarks Commission. They don’t have the authority to stop demolition of the building, but by law can impose a 365-day delay. This tends to force property owners to the table to negotiate.

The commission voted in August to put a year-long hold on the project and require deed covenants that would force developers to replicate the exact facade of the Builders Building in a new project on the land. But their real aim is deeper — to come to an agreement to preserve the building itself.

First Presbyterian has withdrawn its plan to demolish the building and has convened a committee of church leaders to decide what to do. That leaves both sides in a bit of hard place. The church isn’t in the real estate business and doesn’t really have the ability to sink millions into an old office building.

At least one church with valuable land, Sharon United Methodist (aka the ski slope church) in SouthPark, has brought in a developer to build hundreds of apartments/condos, a hotel and retail to go alongside a new church building.

First Presbyterian says they haven’t figured out exactly what they want to do, other than they need to have parking for parishioners and want to fit in with Fourth Ward.

“We want to do what’s best for our church and the city and particularly this neighborhood,” church administrator Jesse Hite said. “We want to be good neighbors.”

The landmarks commission also has a fund that is used to purchase historic buildings to preserve them, but director Dan Morrill said this isn’t a good candidate. First off, this is prime real estate and the purchase price would drain the commission’s resources.

Second, this building is nice and they’d like it preserved — but it’s also not a top priority.

“I wouldn’t say that this building has the level of integrity that would put it real real high on the list,” Morrill said. 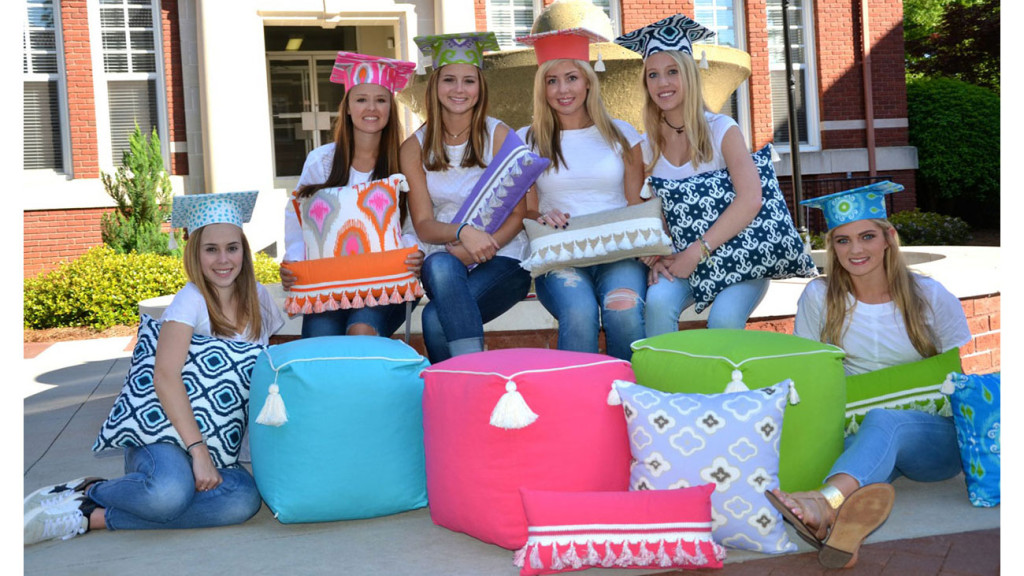