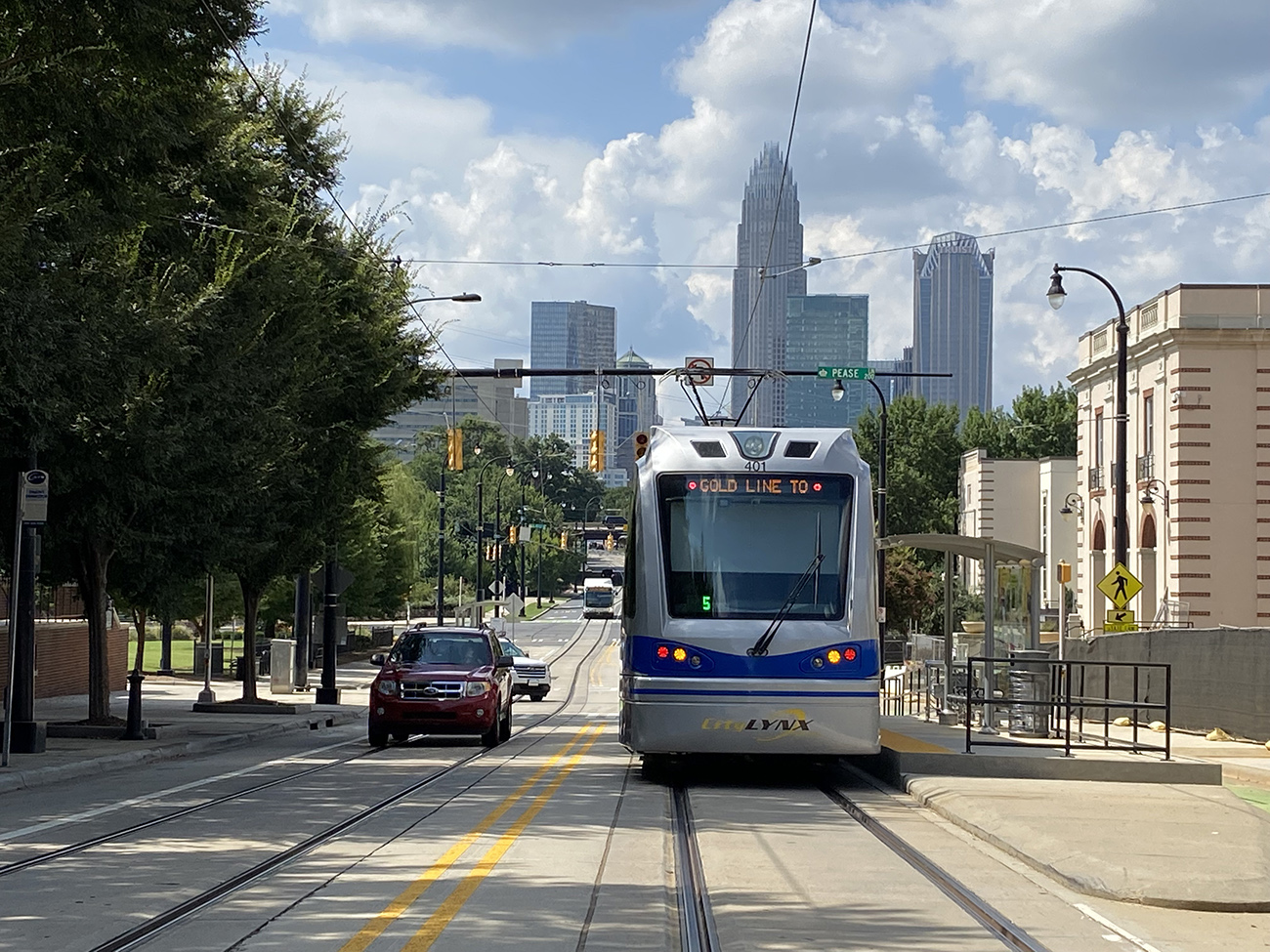 The extended Lynx Gold Line, stretching from Johnson C. Smith University to Plaza Midwood, opens Monday after a string of delays and controversies.

What’s happening: The Charlotte Area Transit System, or CATS, announced last week that the streetcar would start passenger service just days before a federal deadline at the end of August.

Why it matters: The second phase of the streetcar line is the latest high-profile — and controversial — transportation project city officials hope will improve public transit options and spur economic development.

Details: The streetcar will operate every 20 minutes from 5am to 2am every day. It will be free until January, after which riders will be charged the standard local fare of $2.20.

The original line, which opened in 2015, runs from Elizabeth to Uptown. The extension expands the current line west from Uptown to French Street, and east from Novant Health Presbyterian to Sunnyside Avenue in Plaza Midwood, for a total of 4 miles. The second phase added an additional 11 stops to the line. 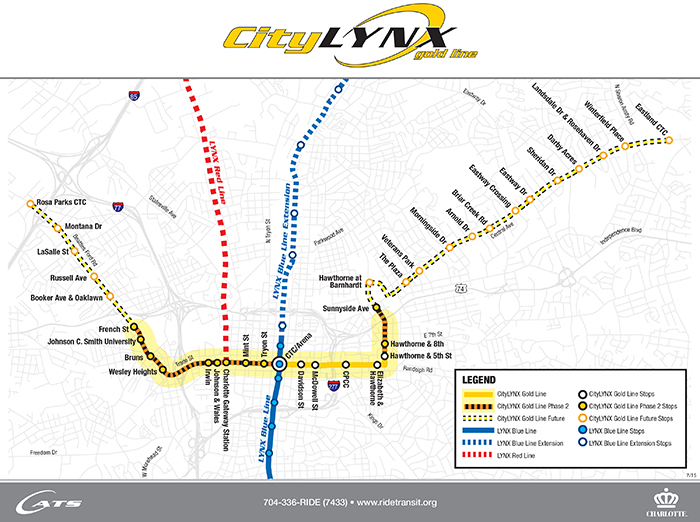 A map of the current and planned Gold Line route. Image: City of Charlotte

Context: The city started construction on the extension in 2017, and the city and federal government split the $150 million price tag. It was first slated to open by August 2020, but that timeline was pushed back numerous times.

August was the final deadline for the streetcar to open set by the federal grant that helped fund the project.

The project has been fraught with controversy. Critics and proponents argued over the costs of operating a streetcar compared to buses. And those in favor said it was also about spurring development along the route, similar to the building boom that has taken place along the Blue Line.

What they’re saying: Shannon Binns, founder and executive director of nonprofit Sustain Charlotte, said it’s unfortunate that the streetcar has been plagued with so many issues. But he’s optimistic it will be an asset to the city in the long run.

J’Tanya Adams, program director at Historic West End Partners, describes the Gold Line construction as “growing pains.” She tells me she’s hopeful about what the line will hold for the future of the area, and already looking to the next planned extension.

As the city marks the latest milestone in its efforts to build up its transit, we put together a timeline of the history of transportation in the city.

Early 1700s: What’s now the intersection of Trade and Tryon was a trading hub where two Native American paths crossed. One connected with Salisbury and the Great Wagon Road to Pennsylvania; the other with the Tuckaseegee ford, the oldest crossing point on the Catawba River, near what’s now the Whitewater Center, according to a Charlotte magazine series.

1852: The first rail line in the heart of the Carolinas opened, connecting Charlotte with Columbia, South Carolina, where it linked with an existing line that took goods to the port at Charleston. The legislature soon approved a line between Charlotte and Raleigh.

1883: The Charlotte Street Railway Company was chartered to operate the city’s first form of public transit, a horse-drawn streetcar, per the city’s website. The streetcars started running in 1887, the Observer reported, and were originally pulled by mules before horses were used.

1926: Wilkinson Boulevard opened as a section of U.S. Highway 74, the first paved, four-lane highway in the South. The Observer touted it as “a showplace of the South,” local writer Chuck McShane once wrote.

1935: Duke Power, which ran the electric streetcar at the time, decided to switch from streetcars to buses. The fare cost 7 cents.

1998: Voters approved a half-cent transit tax that would support the construction of the Lynx Blue Line. An effort in 2007 to repeal the tax failed.

Nov. 24, 2007: Then-mayor Pat McCrory took the first ride on the new Lynx Blue Line, standing behind the driver as the transit line he fought for more than a decade to build cut through South End and on toward south Charlotte.

July 14, 2015: The first phase of the Lynx Gold Line — the signature transportation project of Anthony Foxx’s tenure as mayor — took its first passengers between the Elizabeth neighborhood and Uptown. People who thought the project was worth it called it the streetcar; those who thought it a waste called it a trolley and made fun of the old-looking cars. 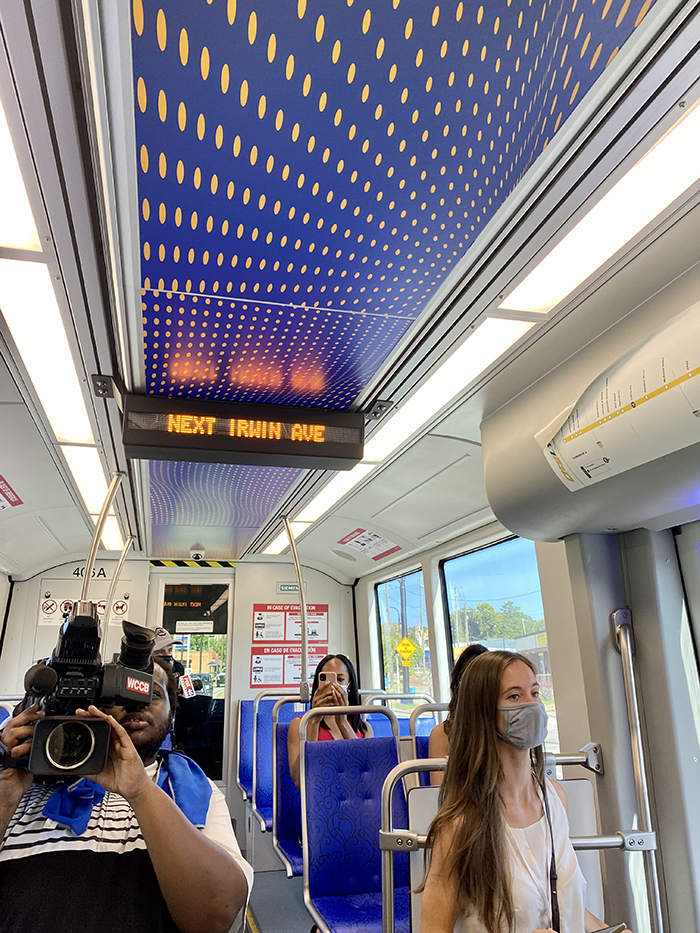 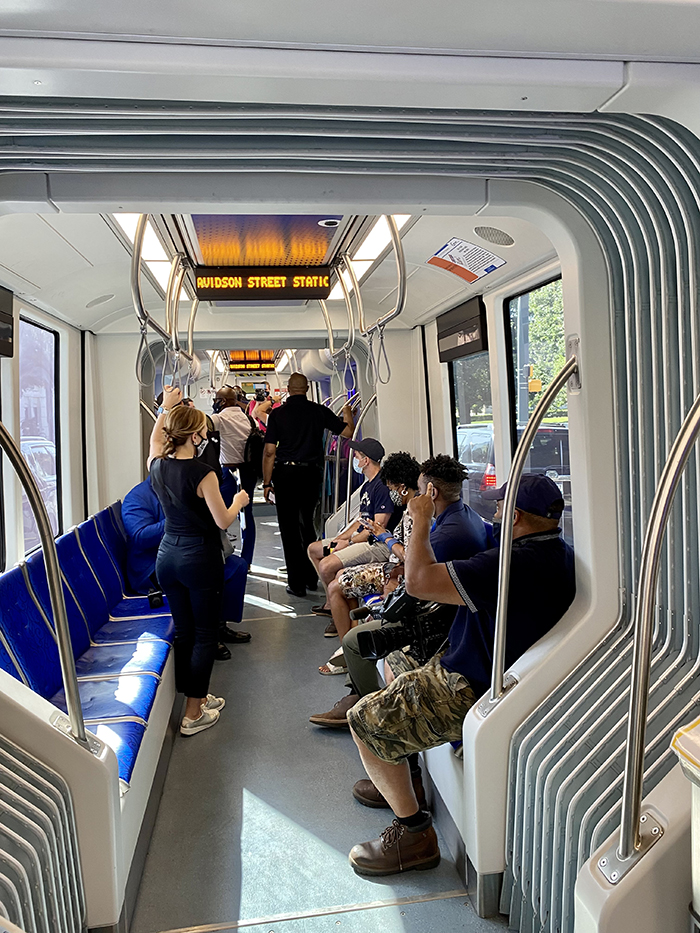 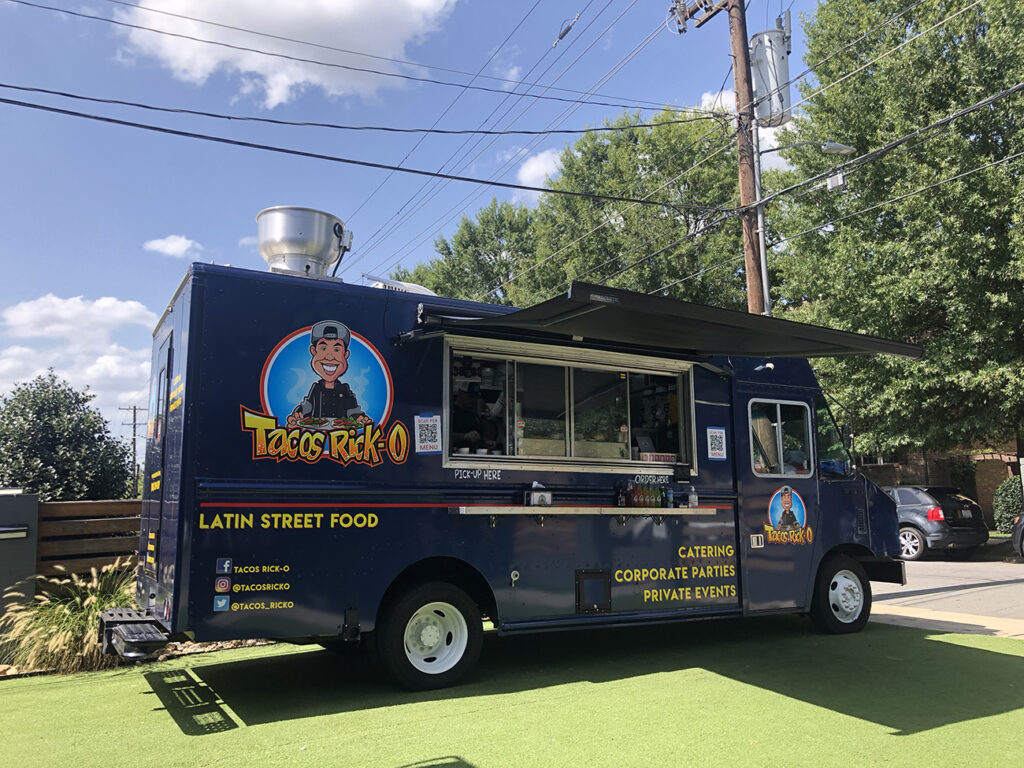