Explainer: Critical race theory, and why it matters now in Charlotte and North Carolina 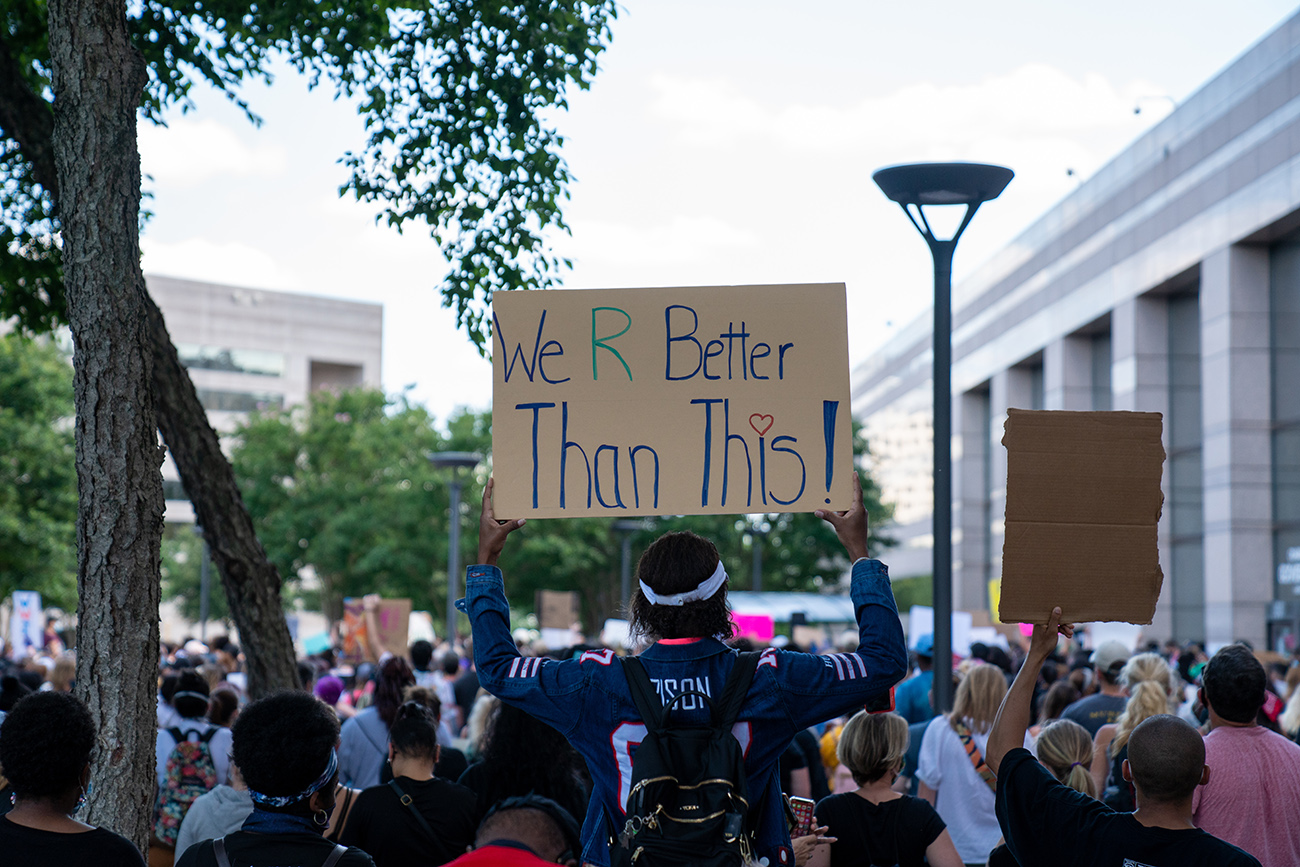 Race is the topic of the summer again, but this time it’s not playing out in demonstrations in the street but in the halls of state legislatures.

Critical race theory is this moment’s culture war, and North Carolina’s GOP-led General Assembly is one of several considering legislation to ban the teaching of it in schools.

But what is it? And why does it stir up emotions? And why else does it matter here?

Definition: In its most basic form the theory examines the relationship between public policy and racial justice. Its framework was developed in the 1970s by legal scholars, Axios’ race and justice reporter Russell Contreras writes. And it outlines how white supremacy maintains power through the law and other legal systems.

Why it matters: In Charlotte schools and elsewhere, it’s become a fight over how to teach our children American history, and how much to emphasize that today’s racial disparities are linked to systemic racism.
Advertisement

The state of play: Politicians who want these lessons and their present-day connections out of the classroom have riled up constituents by saying CRT is akin to Marxism, and that movement toward teaching it is a ploy to liberalize their children.

Yes, but: Willie Griffin, staff historian at the Levine Museum of the New South, tells us he’s concerned about politicians directing any and all conversation about race toward the legal scholars’ theory. He says some are incorrectly conflating the teaching of African American history and its present-day impacts with critical race theory, which in actuality is rarely taught on the K-12 level. 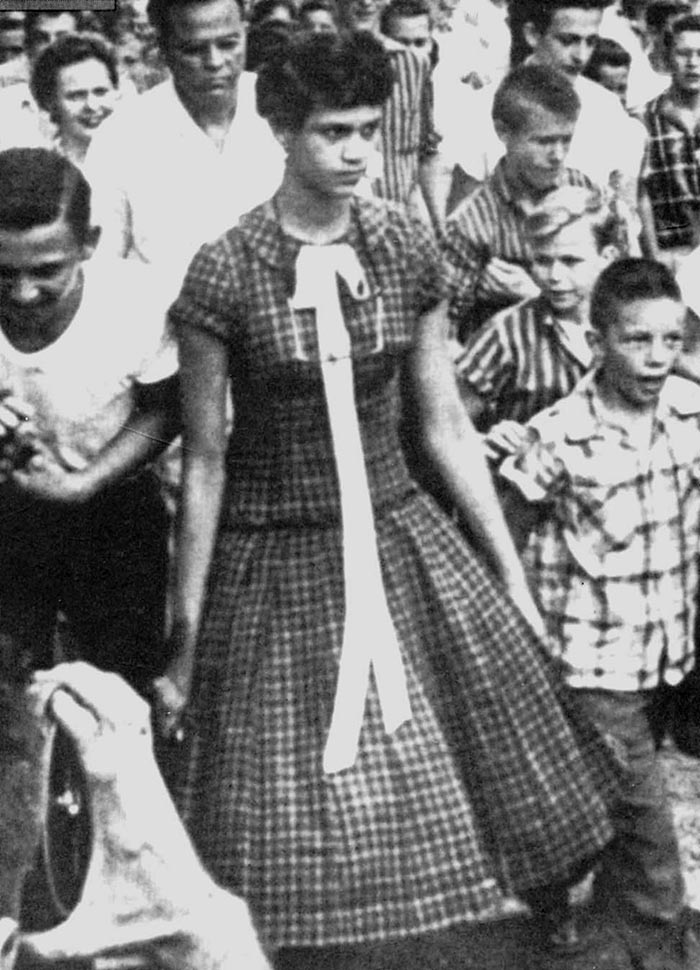 Dot Counts-Scoggins was just 15 years old when she integrated Harding High School in 1957. Her picture wound up on the front page of the New York Times. (Courtesy of the Robinson-Spangler Carolina Room, Charlotte Mecklenburg Library)

The big picture: The rhetoric has some white parents conjuring up visions of elementary school children being shamed for their ancestors’ role in slavery.

Many educators and historians argue that it’s not racism and hate but honesty. And it’s past time, they say, to acknowledge the links between generations — especially in a state like North Carolina, where many current students have grandparents and great-grandparents who weren’t permitted to vote or attend integrated schools.

Between the lines: Axios’ national politics editor Margaret Talev wrote last week that Republicans see race and racism as central to their political strategy for 2022.

Why does it work, though? Well, an Axios-Ipsos poll on race relations last month shows a massive gulf between how Republicans and Democrats view race — a 66-point gap on whether the U.S. must continue making changes to give Black Americans equal rights to white Americans.

Why it matters (in Charlotte and everywhere): The aftermath of George Floyd’s murder has pushed us to examine the ways systemic racism continues to affect people of color. The root of these impacts lies in history lessons most of us never got. 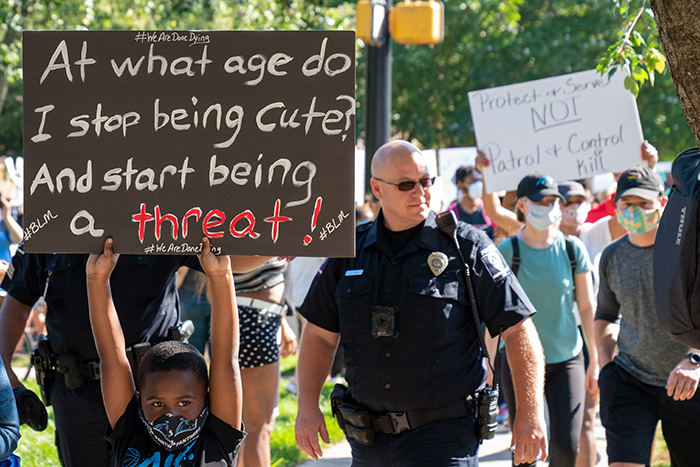 A young boy holds up a sign during a Black Lives Matter protest in June 2020. Photo: Andy Weber/Axios

What’s happening here: So much. There are no shortage of headlines regarding critical race theory in North Carolina.

And the big one: North Carolina’s Senate will soon take up a bill that passed the House last month called “Ensuring Dignity & Nondiscrimination in Schools.”

It says that teachers and school systems can’t “promote” that one race or sex is superior to another, or that any individual is inherently racist based on his or her race, and that no student should learn that U.S. system of meritocracy “is racist or sexist, or was created by members of a particular race or sex to oppress members of another race or sex.”

What’s next: Senate leader Phil Berger’s office told Axios in a statement that he considers it a problem any time kids are being taught that one race or sex is superior to another, or that they’re responsible for things that happened before they were born.

Backstory: Discussions about whose history gets told in the classroom are nothing new, especially in North Carolina.

In the 80 years from about 1889 to 1969, several generations of public school students in the South were taught about the “Lost Cause of the Confederacy.” It was explicit Confederate propaganda that said, among other things, that slavery wasn’t a driving force behind the Civil War because enslaved people were cared for.

After the Wilmington Massacre of 1898, when white supremacists violently overthrew predominantly Black leadership in that city, they described the event as a “race riot” in lessons throughout North Carolina. In fact, one of the leaders of the coup, Alfred Waddell, along with his wife, went into public schools to teach kids of the heroism of Confederate generals. 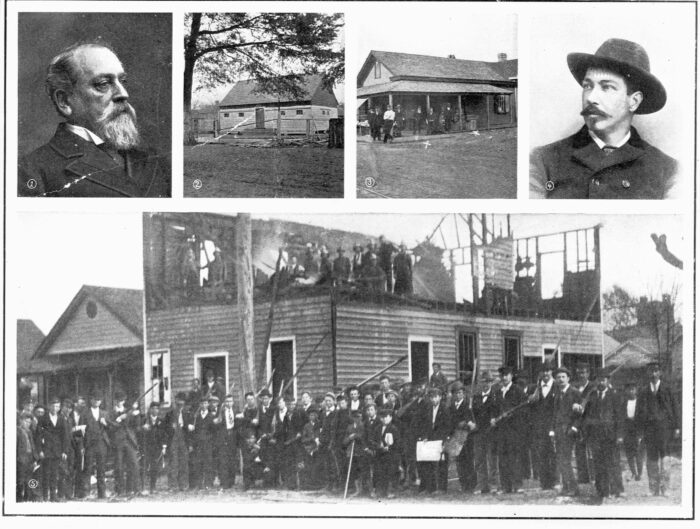 Over the past 10 years, as movements for social justice have grown in the wake of police killings of Black people, school systems nationwide have considered their role in systemic racism, and how to teach a more well-rounded version of slavery to school-aged children.

Now, by placing any lesson under the umbrella of critical race theory and banning it, some wonder how it’s possible to teach these events truthfully.

One more local headline: Last week, WBT published a nearly 3,000-word investigation that looked into the alleged teaching of critical race theory at Ardrey Kell, and how teachers and parents are upset over being made to participate it.

Ardrey Kell has had several high-profile incidents regarding race in recent years.

Yet in the WBT story, none of the parents, teachers or politicians who express concerns over critical race theory mentions those incidents.

The bottom line: Omitting even very-recent history of Black experiences with racism only confirms many of the reasons people have been fighting for the past decade to incorporate more diverse perspectives on history.

Paige’s thought bubble: “Alternate facts” live on. Republicans and Democrats are working from two completely different sets of information. And the battle over CRT shows how those differences translate to historical study.

Michael’s thought bubble: Schools, as ever, will only teach kids so much. The rest falls on parents and community. My wife grew up in Charlotte and attended CMS schools and never learned of Dorothy Counts, the 15-year-old who walked through a wall of white people who spit on her and tossed pebbles at her as she integrated Charlotte’s schools in 1957. A few weeks ago, Dorothy held our son, a white boy, on her lap. 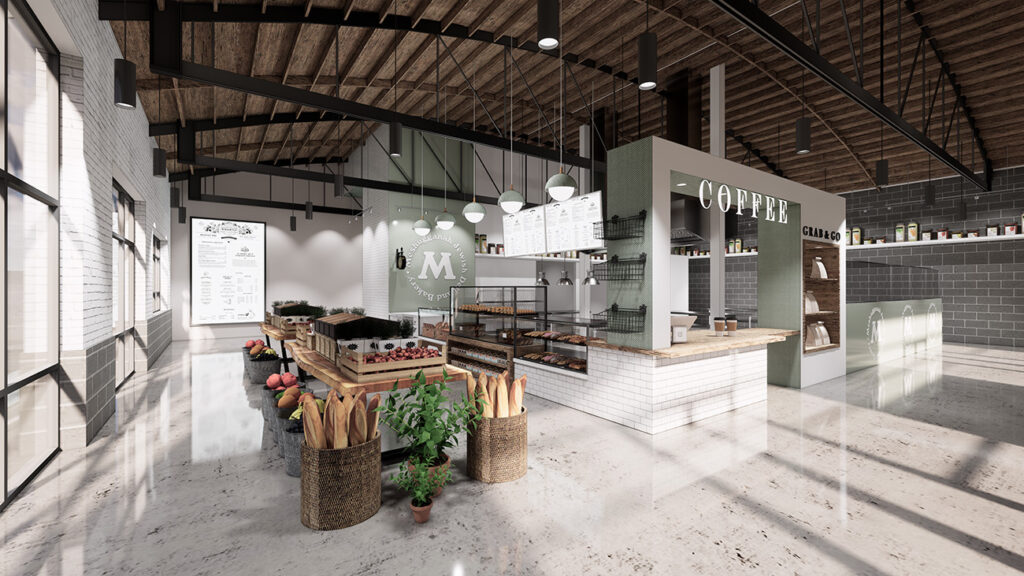 Scoop: Jewish deli with bagels and challah to open on Graham Street