9 worst parts of driving in Charlotte, according to readers 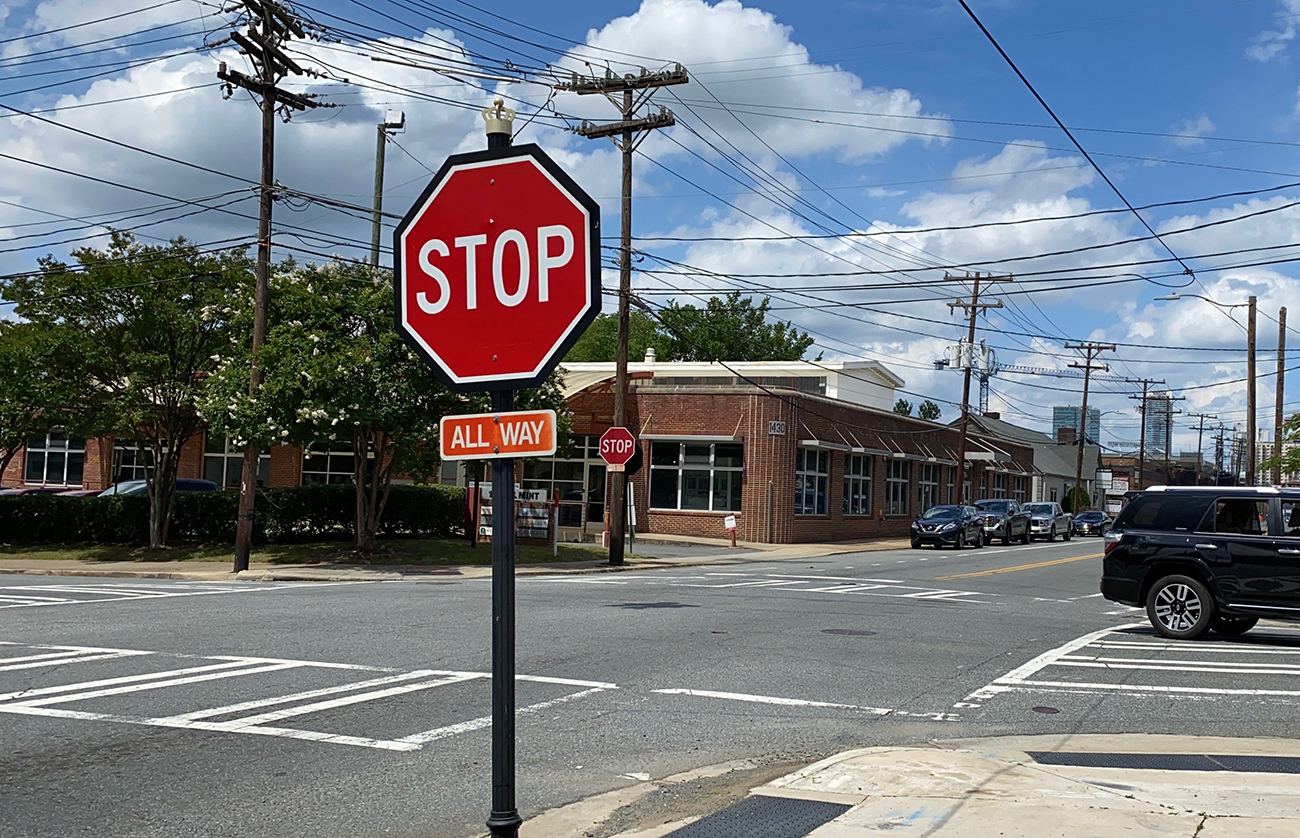 Note: This story was amended on June 22 to include updates from the city and Charlotte Department of Transportation on what’s happening at some of these intersections.

Drivers in west Charlotte rejoiced in April when the N.C. Department of Transportation fixed a notorious bump on Wilkinson Boulevard.

We got tons of “praise the lord” comments on Paige Hopkins’ story on the death of the bump. So one day in our newsletter we asked for some of your other Charlotte driving pet peeves and came up with this list. (I may have added two of my own.) 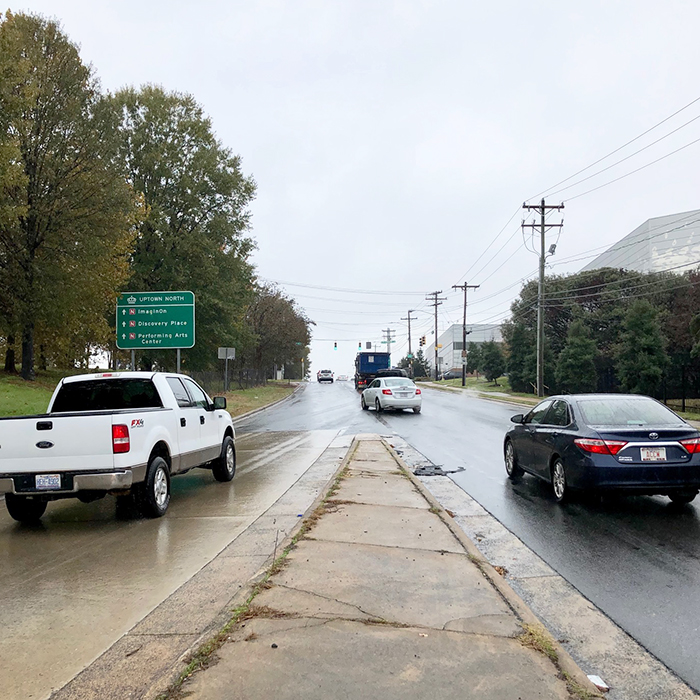 Merge at your own risk. Photo: Ted Williams/Axios

We knew this was number one on lots of lists. We published this story about it in 2019. Many others have written about it. And when we asked for your biggest pet peeves, it was the first that came rolling in.

(2) The Central Avenue street parking between Pecan and Thomas

Always a fun one. You’re headed away from center city, and all of a sudden everybody’s merging into the left lane for all of one block because there’s a line of cars parked in front of the shops on the right.

(3) The tree blocking the sign at E. Stonewall and Charlottetown.

“A driver who is misled by the lack of information on the hidden signage could make a sudden, dangerous effort to change directions upon realizing his mistake of getting on the wrong on-ramp,” writes Susan L.

“I have officially (in my life) renamed the city of Charlotte from the ‘Queen City’ to ‘Orange cone city.’ … My wife and I moved to CLT in August 2019 and had driven across BALLANTYNE Commons Parkway and Providence Rd. when we lived near South Park area. There were orange cones all across the intersection. Almost two years here in the city and we have moved to Raintree neighborhood and there are still those orange cones at the same intersection despite no sign of any ongoing construction. … Man o man!” — Amit M.

I moved to North Carolina 24 years ago, and in every city in every part of this state I can tell you that Southern hospitality is an absolute killer at four-way stops.

By all means, you!

Charlotte’s a little different. In Charlotte, that politeness mixes with some big-city self-centeredness to create the most infuriating traffic concoction. Few places is it more on display than this intersection. I went back the other day to stand on the corner for 10 minutes, and in that short time I saw at least three drivers honk or throw their arms up in disgust.

(6) The blinking light at Birdsong Brewing 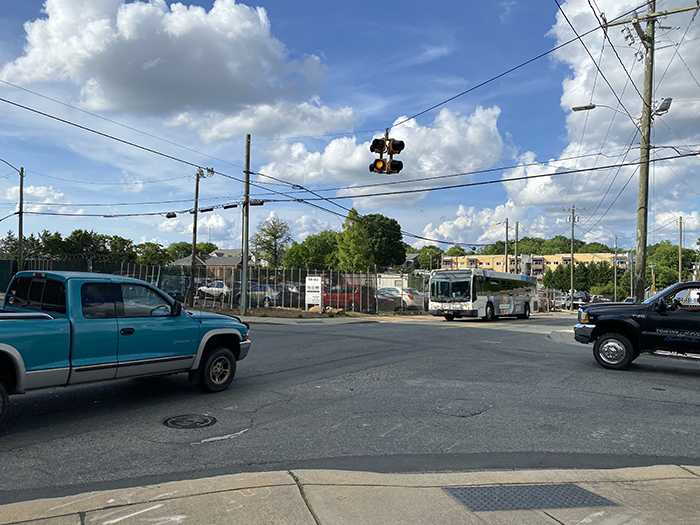 The North Davidson Street-Belmont Avenue intersection may have once been a sleepy little interchange between junked car lots. But now with apartments popping up everywhere, and people walking back and forth from Optimist Hall to Birdsong, it can be a harrowing scene: 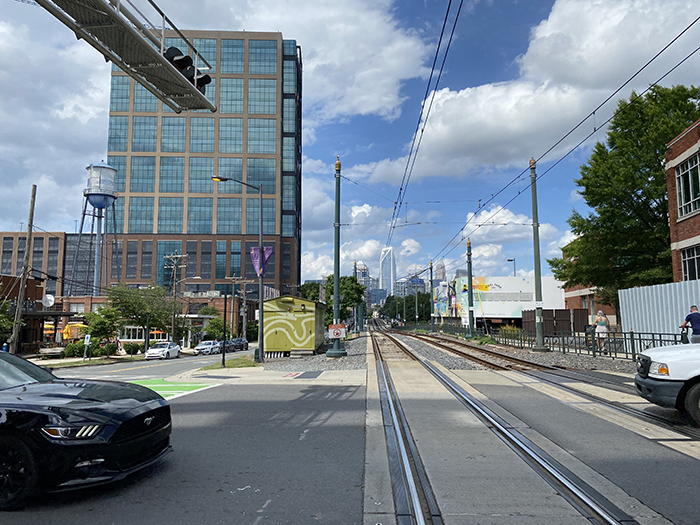 Look both ways. Or all three or four ways. Photo: Michael Graff/Axios

Scooters, runners, cars and trains, oh my. They all come together at the intersection of West Tremont and Camden and the Rail Trail in South End. The good news is there haven’t been any serious injuries here in the past four years, so it’s mostly just a spectacle.

(8) No left turn at Monroe and Idlewild

“There’s an Aldi on Monroe Road where you can’t make a left turn if you’re coming from downtown. It’s infuriating. They just need to move the median like 2 feet down. Instead of turning left people have to wrap around the next stoplight.” — Leul S.

(9) And South Boulevard, in general

“Can you please please please I’m begging do a story on how to appropriately stop at the new crosswalks on South Boulevard? I think drivers in Charlotte are so confused and don’t know the rules. When it’s a red light you stop but then when it starts flashing it’s like a stop sign you can stop look and go. … Axios can probably reach a ton of people that regularly drive on South Boulevard. Please help us that know how to drive properly from losing our mind. Thanks!” — Amy B. 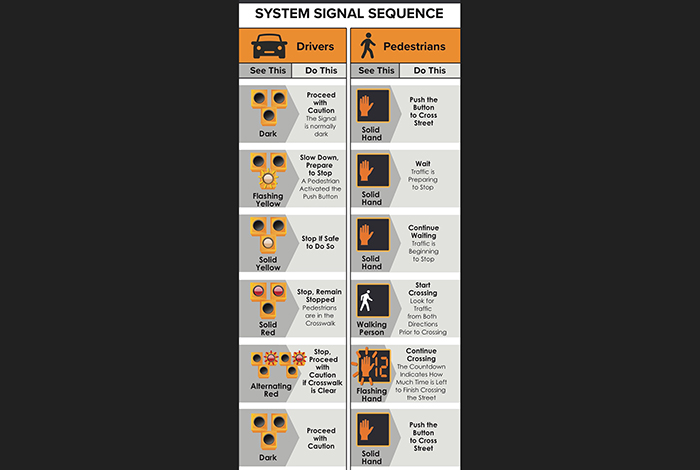 About that last one, South Boulevard has actually gotten safer in recent years, according to a map of severe accidents on the city’s web site. Since the end of 2017, there’s been one such crash from the 277 interchange all the way to Woodlawn.

What’s happening: As part of the city’s Vision Zero pledge to eliminate traffic deaths and severe injuries, Charlotte stopped tracking “High Accident Locations” and now looks at “High Injury Networks.” In short, they’re putting more focus on areas with a handful of severe accidents than those intersections with a dozens of fender-benders.

But other places remain hazards. Go here to see a map of the areas with large numbers of deaths and severe accidents with injuries, from 2016-2020, according to the city’s Vision Zero dashboard.

Here are a few from my recent scanning of the map: 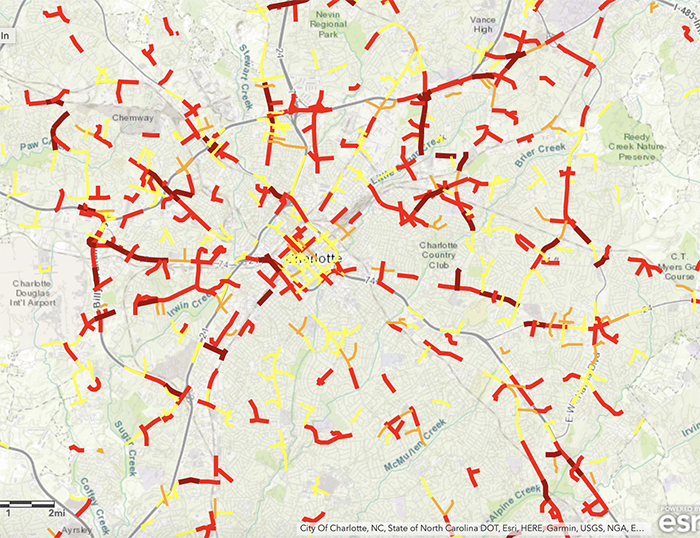 Screenshot of the High Injury Network map, via CDOT website 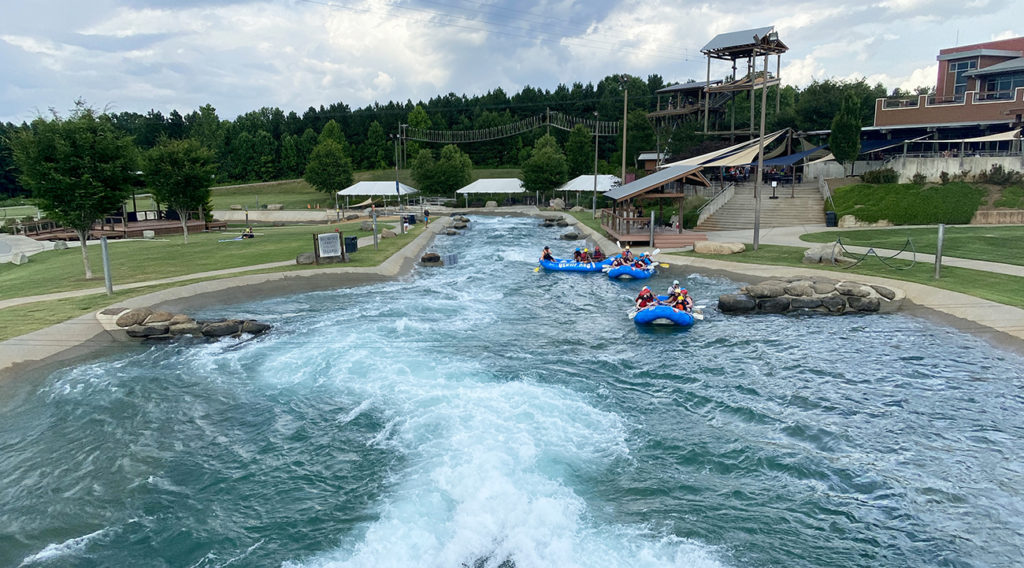 Axios Weekender: 30 things fun to do including yacht yoga and outdoor concerts