Pat McCrory’s radio show climbed to No. 1. Will he give it up for a Senate run? He’d lost his governor’s seat by about 10,000 votes. Universities didn’t want to hire him because his name was synonymous with HB2, the law that required people to use the bathroom that corresponded with the gender listed on their birth certificate. President Trump brought him in for an interview, but offered no position.

On a trip to Washington in January 2017, protesters surrounded McCrory outside the Fox News studios and chanted, “Shame! Shame! Shame!”

McCrory had lived in North Carolina for 50 years and spent nearly 30 of them in public service, including a popular 14-year run as mayor of Charlotte. But by the end of his time in Raleigh, he couldn’t take a walk with his dog without someone rolling down a window to yell at him.

About a year after the election, though, WBT invited him on the air. He started with five minutes. Then an hour. Then two.

Now he leads the most popular morning show in Charlotte. The Pat McCrory Show with Bo Thompson held the No. 1 position for its time slot for seven straight months in 2020, from May through November.

And now he’s one of the leading names being tossed around as a possible Republican candidate for the U.S. Senate seat Richard Burr will vacate in 2022.

Why it matters: If you thought you’d heard the last of McCrory after his unceremonious exit from the governor’s mansion, you were wrong.

As much as he enjoys it, the pull of political life is strong.

“Talking about something is not the same as doing something,” he told me during a series of conversations last week. “You get stimuli from talking about it, whether it be over a podium or a microphone or a TV. But that ends quickly. I’m used to being part of the decision.”

We talked for about five hours in total over the course of a week. McCrory wouldn’t discuss running or not running. But former state GOP executive director Dallas Woodhouse wrote in the Carolina Journal that McCrory’s entry into the race was “likely.”

Radio success doesn’t guarantee political success, but given how down he was four years go, the numbers certainly highlight some resilience in the Pat McCrory brand.

On air he jokes about how much he prepares for each day — and how much he doesn’t prepare.

He laughs that you can trust everything he says — and none of what he says.

He says he’d love to get back into political office — but also that he can’t imagine dealing with it again.

He blasts the media — and yet he’s part of the media.

He told his listeners he didn’t trust that I’d treat him fairly in this story — and yet he answered all of my calls. (“Just having fun,” he told me when I asked about that.)

His co-host, Thompson, sees McCrory’s dualities up close each day. Thompson’s a mid-40s Myers Park High grad who’s living out his dream job, talking on the radio to his hometown each morning. McCrory calls Thompson the hardest working man in radio. Thompson says McCrory has made him a better host. 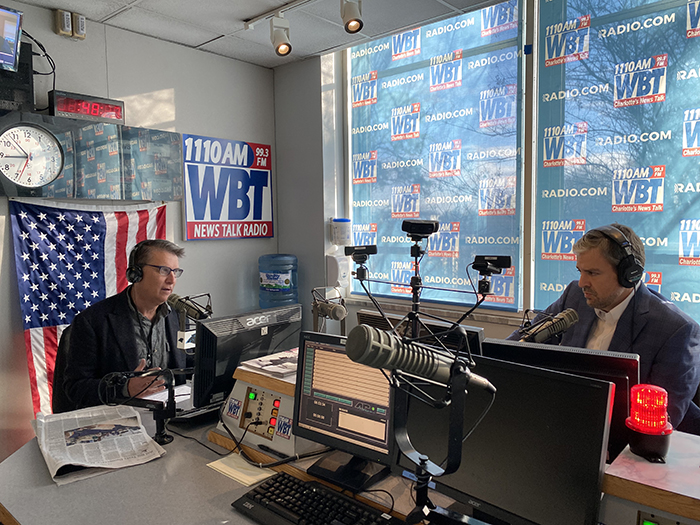 McCrory’s co-host, Bo Thompson, said he’s not sure he’s seen a run at No. 1 like the seven-month stretch they were in that position in 2020.

When I visited the studio last Tuesday, McCrory was in his car in the parking lot at 7:50. The show starts at 8. Thompson, of course, had been there since about 4am.

A security guard held out a Wall Street Journal for him and McCrory took it like a running back taking a handoff. In the studio, there’s a wooden chair someone left curbside in Dilworth. McCrory, the former governor, pulled over and picked it up one day on his way in.

He often plays up the character of Pat McCrory on the show — but that character never strays too far from who he really is and how he really thinks.

He bounces between local and national issues, sprinkles in anecdotes about his time in office, and makes up the occasional imaginary character such as “David from Asheville” or “notes from corporate.” He shifts from silly to serious in stretch of minutes.

Music is central to the show. But not just any music. His music. His producer, John Moore, has a library of songs from the 1960s and 1970s to play while he talks.

As a teenager at Ragsdale High in the Triad, he’d slip off his room to read World Book Encyclopedias and listen to Beatles or Marvin Gaye or Cat Stevens albums — some of the same music that comes up each day now from 8-10 on his show.

He sees many of today’s current events — including the Jan. 6 insurrection at the Capitol, which he’s criticized — through the lens of someone who came of age during that era. “This isn’t new,” he says.

He claimed an at-large seat on Charlotte’s city council in 1989, the same fall that Hurricane Hugo wrecked much of the city. He was 33. Six years later, he was mayor.

In that role he often bragged about how much he frustrated both Democrats and Republicans alike. And he was beloved by both, too.

He lobbied, for instance, to raise the sales tax to fund a big transit plan in 1998. When the Hornets left Charlotte, he worked with the NBA to get a team back here. And the McCrory-led city council funded the building of the team’s Uptown arena, despite the fact that voters had shot down a referendum to pay for the building.

He faced tons of opposition to both efforts, but today the Spectrum Center and Blue Line are widely viewed as success stories.

Regardless your opinions of him, he’ll go down as one of the key figures in Charlotte history. And part of his appeal on the radio is how fluent he is in the city’s history and growth.

Charlotte’s population jumped up by 257,000 people in his 14 years as mayor. But it’s also grown by another 200,000 since he left, meaning many current residents don’t even know a time when he was in local politics. 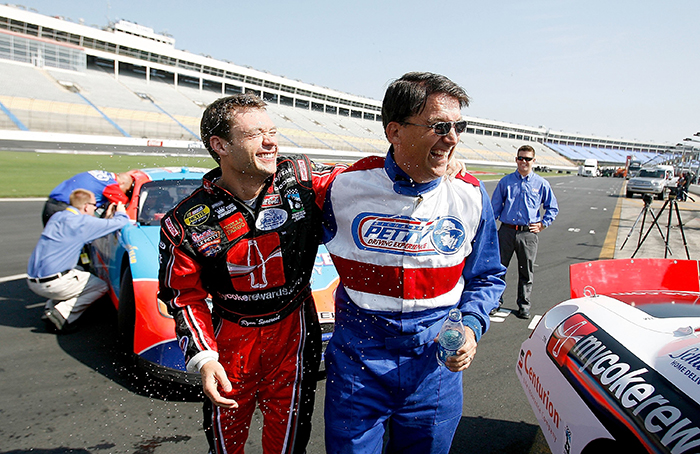 Almost immediately after winning the governor’s job in 2012, though, McCrory fell out of favor with people in Charlotte.

He signed off on several things that were unpopular here, including efforts to cut unemployment benefits, deny Medicaid expansion, and require voter IDs.

“What happened to Mayor Pat?” became a favorite question among local Democrats.

His statewide approval remained high, though, until the HB2 fallout. Companies such as PayPal pulled out of bringing jobs here. The NBA pulled its All-Star Game.

The AP estimates that HB2 cost the state $3.7 billion.

He tried to hang onto the job as long as possible. He lodged several election fraud claims his lawyers couldn’t prove. By the time he was officially out of office in January 2017, even some of the people who loved Mayor Pat were feeling fatigued.

Even he was: “If you ask anyone who loses a job, it’s a horrendous experience,” McCrory told me. “Three types of loss – loss of job, loved one, or divorce. They’re awful. Now, when I see political officials lose, I think differently than others.” 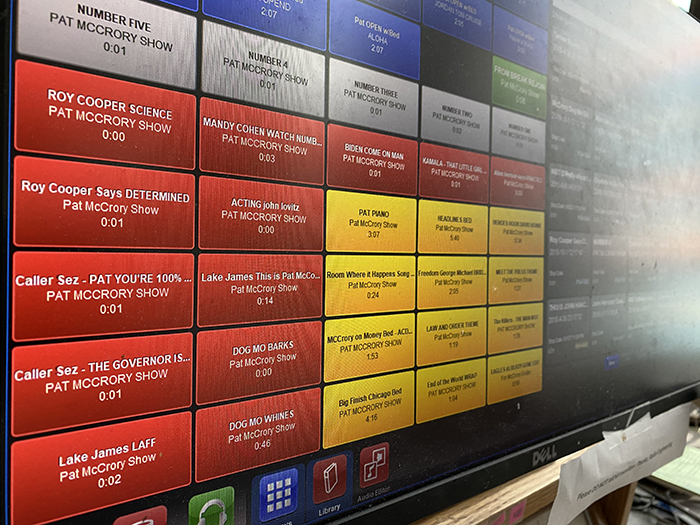 Producer John Moore has a series of soundbites he keeps in the queue.

McCrory’s show hovered around Nos. 6 or 7 in the rankings for most of the first two years. But when the pandemic settled in, people turned him on, probably in part to hear what he was saying about Cooper’s response.

The show climbed to No. 4 in the region by March, No. 2 in April, and No. 1 in May. He and Thompson use the audience to help raise money for local causes; in late January for instance, the station presented $255,000 to organizations that feed hungry children in Charlotte.

Sinclair, his former campaign staffer, says that the issues of 2020 probably pushed some of McCrory’s time in office farther back in people’s minds.

“People don’t get up in the morning and think about HB2 anymore,” Sinclair said. “They’re thinking about, ‘Am I going to get my shot today. Am I going to have a job?’

“By the time people get to the general election of 2022, folks are going to be like HB-what?”

The state of play: Congressman Mark Walker is already running for the GOP nomination. And many are waiting to see whether Lara Trump, daughter-in-law of the former president, joins.

McCrory’s decision isn’t imminent, but a University of Nevada poll in December showed him nearly tied with Lara Trump among Republican-leaning voters in the state.

Whether he runs or not, he still believes he has something to offer. And if his radio show’s success is any indication, people still will listen to what he has to say.

Then he pauses and laughs.

“You know, every 20-year-old thinks they have wisdom. Every generation thinks they invented sex and revolt. But then you get up in your 60s and think, ‘Wow, I didn’t know anything.’”