How can we fix it? And other questions I asked veterans about a deeply divided America Division in America isn’t new. But, the type of division that’s plagued the country over the last few years is different.

It’s created two sets of facts and two distinct sets of values. And there’s no understanding for those with differing beliefs, and I’m not saying there should be (see James Baldwin’s quote on disagreement), but the lack of empathy makes everything harder.

Over the last few months I’ve thought a lot about these two questions as they related to these divided states: 1) How do we fix it? and 2) Has it been this bad before?

To get answers I spoke with a few people who’ve lived during times of deep division within the United States. All of the men I spoke with either served in or documented the Vietnam War. Each of their perspectives was different but there was common ground in at least one area: disappointment. 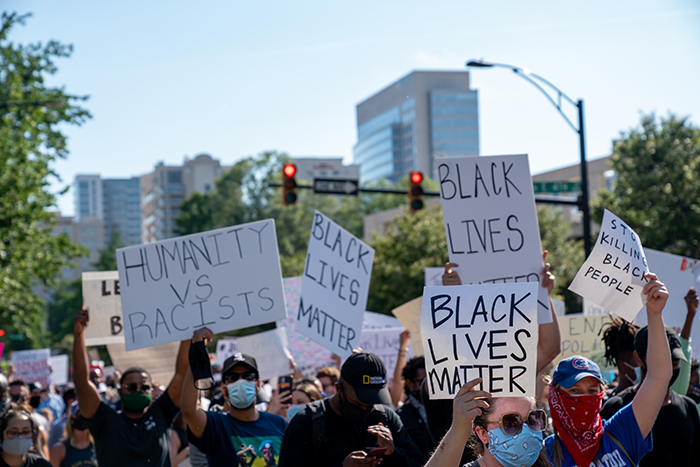 An NAACP protest in Uptown over the summer.

Learning from the past: Joe Galloway, a wartime reporter and historian who’s worked on battlegrounds all over the world, says what we’re facing now is much different from the past, but just as ugly.

“It’s no less bitter and no less sharply divided,” he said. “I don’t know how we heal this thing.”

Galloway spent four tours covering the Vietnam War, although he says he didn’t want to go back after the first. He recounted a time when the soldiers he was with were outnumbered and he had to “(take) his rifle and become a solider for a short while.”

He says he lost 70 friends and colleagues in Vietnam, which he describes as the most divisive war he’s covered. “I really began to think that none of us were supposed to survive this war,” Galloway said.

And those who did survive didn’t get the welcome they deserved. “I think that we couldn’t see the difference between the war and the warriors who fought it. It’s okay to hate war,” Galloway said. “Nobody hates war more than the soldier. But you should never hate the warrior.” Joe Galloway with the U.S. Marines in Danang August 1965.

Howard Duvall, a Vietnam War veteran and lifelong Charlottean, said after 13 months in Vietnam he and his fellow soldiers were advised to take their uniforms off in the airport bathroom so they’d be less recognizable.

“There were always welcoming parties of eggs and tomatoes, it was not a fun time,” Duvall, who wasn’t thanked for his service until 2005, said of returning home. Despite all this, he says what the country faces today is worse than the internal conflicts then.

“I am incredibly disappointed, discouraged, and just incredibly unhappy about it. I can’t believe it’s actually happening in the United States,” Duvall said of the division in America. 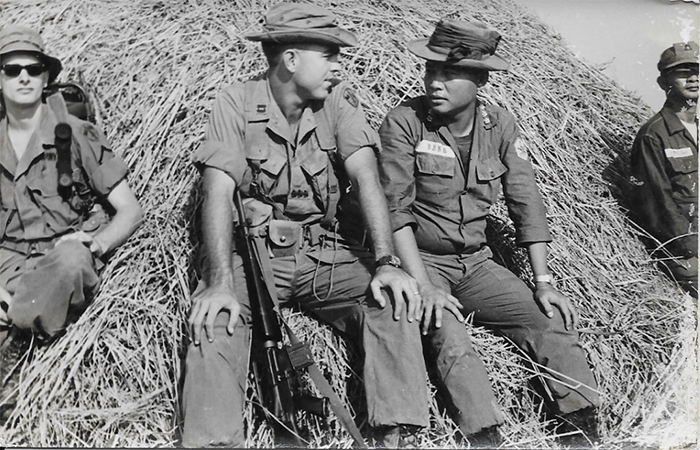 Howard Duvall (second from the left) in Vietnam.

Thomas Vinson, another Vietnam War veteran, grew up in Union County. Vinson, a Black man, has a fascinating family story. His great great great grandfather Bob Ross inherited hundreds of acres of land from Maggie and Sallie Ross, the white women who raised him. Maggie and Sallie’s family sued for the land and the money left to Vinson’s family. In the end Vinson’s family was able to keep the land but lost the money. To this day some of that land is still in the family.

Vinson says his experiences growing up with white people were mostly positive aside from being called the n-word from time to time. He also recounted his first time voting in 1964. He and other Black voters were required to recite the Preamble before they could cast a ballot.

While Vinson, an optimist and self-described social butterfly, thinks fondly of his childhood and of many of his interactions with white people in the segregated south, it’s still clear that he wasn’t immune to racial tension felt back then. And still, when asked whether America is in worse shape now than it was then, he didn’t hesitate to say yes.

“It’s worse now,” Vinson said before he recounted the stark contrast between the tears of joy he cried after President Obama was elected in 2008 and the sadness he felt with President Trump’s election in 2016. 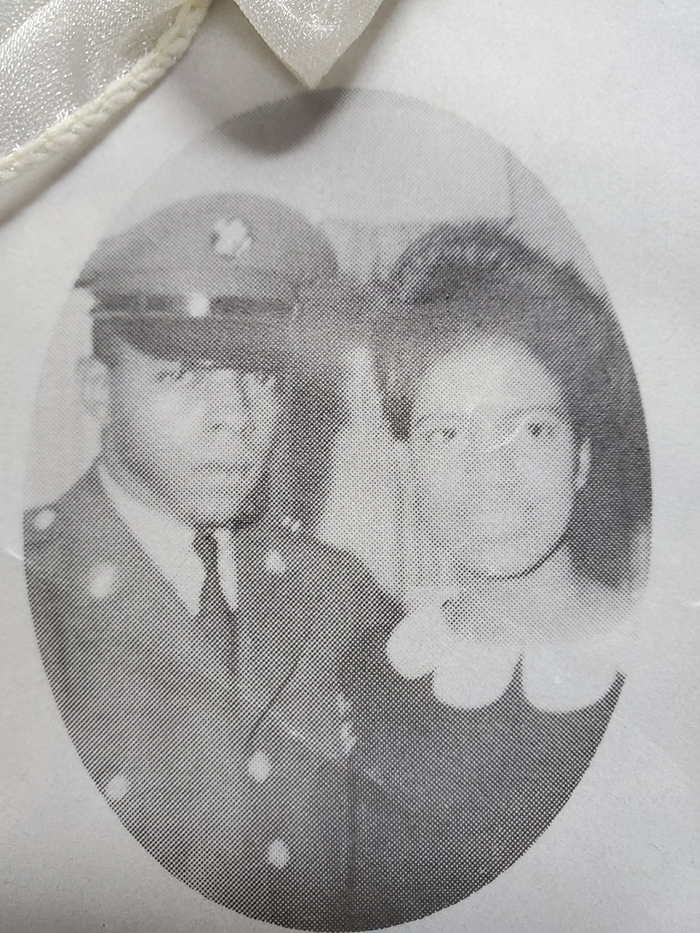 Thomas Vinson in uniform with his wife, Evelyn.

Where do we go from here?: All three men agreed that a presidential leadership change would be a step in the right direction.

Galloway said Biden winning wouldn’t be enough, though. “Are they going to do an Obama and block everything that he says he wants?,” he wondered. “So it’s not in Biden’s hands completely. It’s left to some of the other folks.”

Vinson was hopeful for a Biden win but said he relies on his faith and God for healing. 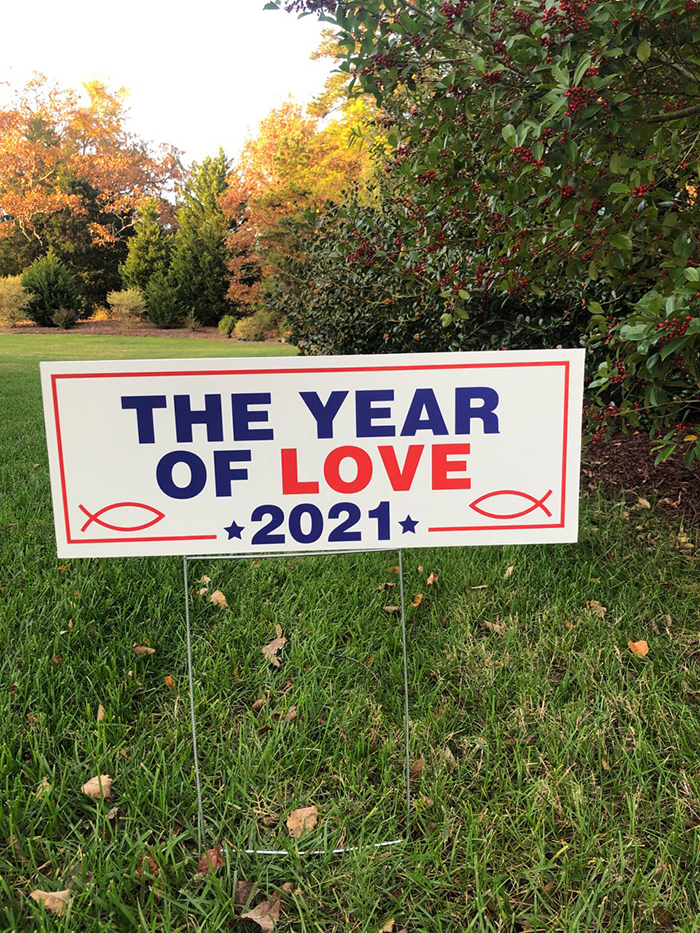 Vinson had “Love 2021” signs made, and distributed them to family and friends. He says the signs are supposed to remind people to love one another.

Duvall believes that good leadership can set the tone.

“We’ve got one candidate who is clearly more comfortable in a chaotic environment where he’s most concerned about representing his base and nobody else,” Duvall said. “And we’ve got another candidate who says if I get elected I’m not going to be a party president, I’m going to be the president of the United States.”

And while leadership is a start, Duvall says there has to be a mindset shift as well.

“You and I may disagree. And we live here where it’s okay to disagree. It’s okay to disagree with the government. But you’re not my enemy. And if we are threatened I would expect you to be right side by side with me defending us,” he said. “That’s what has to happen, I think, for us to become re-unified.”

All three of my interviews took place before Biden was projected as the winner. But once that news broke we saw Charlotte celebrate, and Biden himself gave an address that echoed some of the advice I got from Galloway, and Duvall, and Vinson.

I pledge to be a President who seeks not to divide, but to unify.

Who doesn’t see Red and Blue states, but a United States.

And who will work with all my heart to win the confidence of the whole people.

To support local veterans or to plug in with a veterans group, check out Veterans Bridge Home. 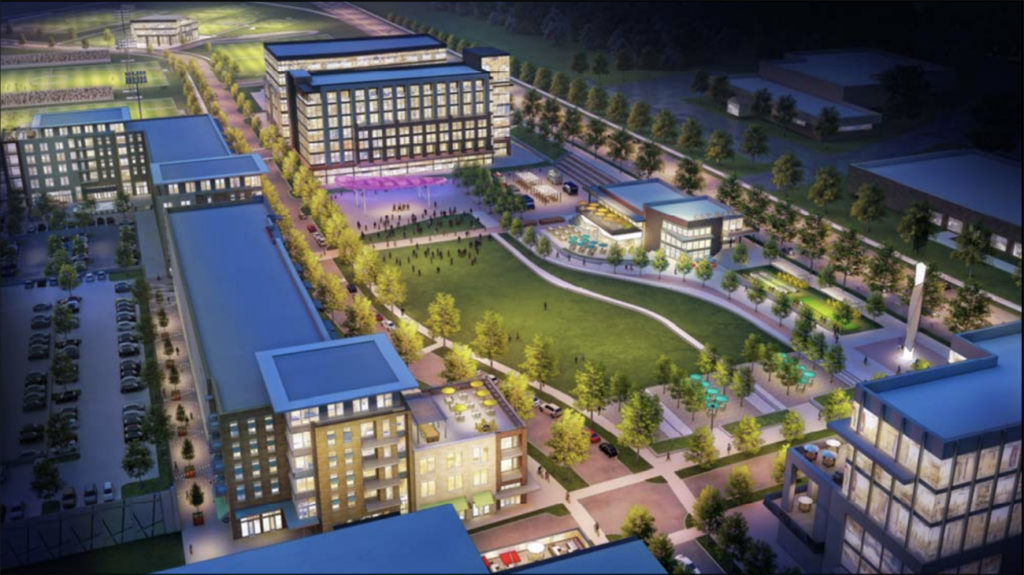