How Charlotte celebrated the Biden-Harris victory, from #wokebaby to the Black Lives Matter mural 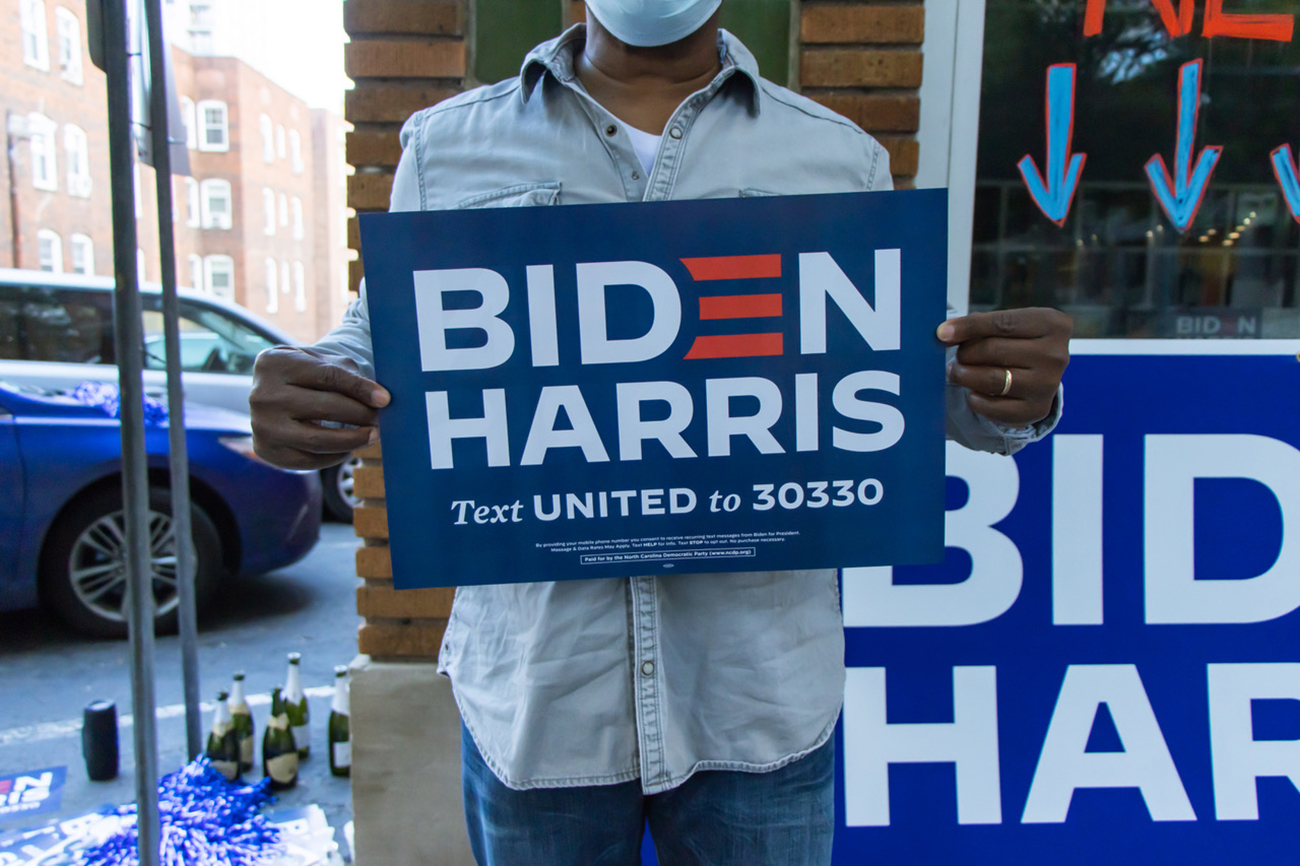 At night, the blue beams from smartphones shined up at smiling faces in Uptown. In the neighborhoods, people strung cords through windows to televisions they’d set up in backyards and on front porches. They sat in camping chairs and on barstools, waiting for words from Joe Biden about healing.

Earlier in the day, a couple walked down the brick sidewalk in NoDa ringing a bell, because they didn’t know what else to do other than ring a bell. A convertible buzzed around the city with its top down and a rainbow-colored pride flag waving. People honked horns from all corners of the city on a 79-degree day.

For sure, not all of Charlotte was thrilled with the news that Biden would be the next president. Biden won 67 percent of the vote in this county, not 100 percent. And some of Donald Trump’s most devoted followers here don’t believe it’ll hold up, echoing the president’s words about a “stolen election” in local Republican forums. For sure, there’s agony for some.

But under the bluest of skies in the day, and on the warmest of November nights in the evening, most of Charlotte was delighted. The weekend brought temperatures good for putting the top down.

The day after Trump’s inauguration, in fact, thousands gathered in First Ward Park in protest for the first Charlotte Women’s March. The next fall, the city’s voters overwhelmingly elected an activist to city council, and the first Black woman to be mayor. The next fall, in the 2018 midterms, the same voters overwhelmingly voted to increase an affordable housing bond from $15 to $50 million, and blue-washed the county commission to a 9-0 Democrat supermajority. And just this year, the city commissioned 16 artists to each paint a letter of the Black Lives Matter mural on Tryon Street.

How much good it’s all done is up for debate. Charlotte still has a tent city that’s growing by the day with unhoused neighbors. In January, a thousand people lined up for only 129 affordable units. The homicide count has soared over 100 for the second consecutive year. And in the face of all those big things, city council spends too much time bickering over little things.

We have problems. But starting on January 20, for about two-thirds of this city at least, their list of problems won’t include the White House.

Trump has railed against Democrat-run cities. That only increased this year, after the police killing of a Black man named George Floyd in Minnesota, and police clashed with protesters in places like Portland. Just three weeks ago in a rally in Gastonia, 30 miles west of Charlotte, he riled up a crowd of 23,000 by saying cities needed to be rebuilt, and that Biden would only make them more unsafe.

But if you drove around the Carolinas’ largest city on Saturday, you’d have seen mostly glee.

Allie Kelly and her daughter had gone uptown for a Harry Potter-themed scavenger hunt. When they heard the news that all the networks were calling the election for Biden, they went out on Tryon Street and danced. When Allie asked her daughter why they were dancing, the girl replied, “Because Biden won!” 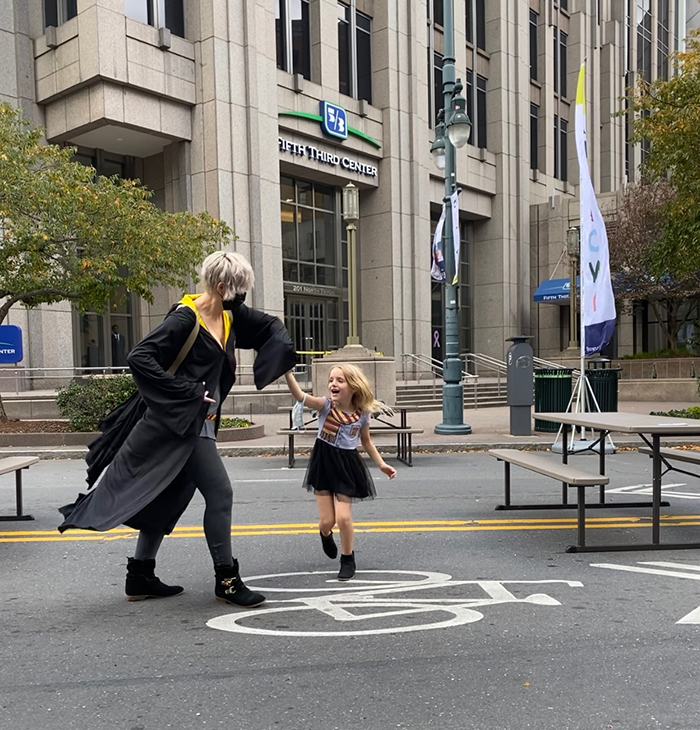 It was community; it was personal.

The next morning, Sunday, I reconnected with someone I met in the days after Trump’s inauguration.

On January 21, 2017, Jenny Sowry attended the Women’s March with her husband, Sam, and 9-year-old son and 22-month-old daughter. They’d each made signs on cardboard.

Their daughter scribbled all over hers in green and blue and red and purple.

That chilly January afternoon, Jenny’s husband hoisted the girl on his shoulders and she held her scribbles high. Jenny took a picture, and before she knew it, that afternoon, it had received some 22,000 shares, with the hashtag #wokebaby.

It’s been nearly four years since we talked. On Sunday, I started the call by asking how Jenny was doing. 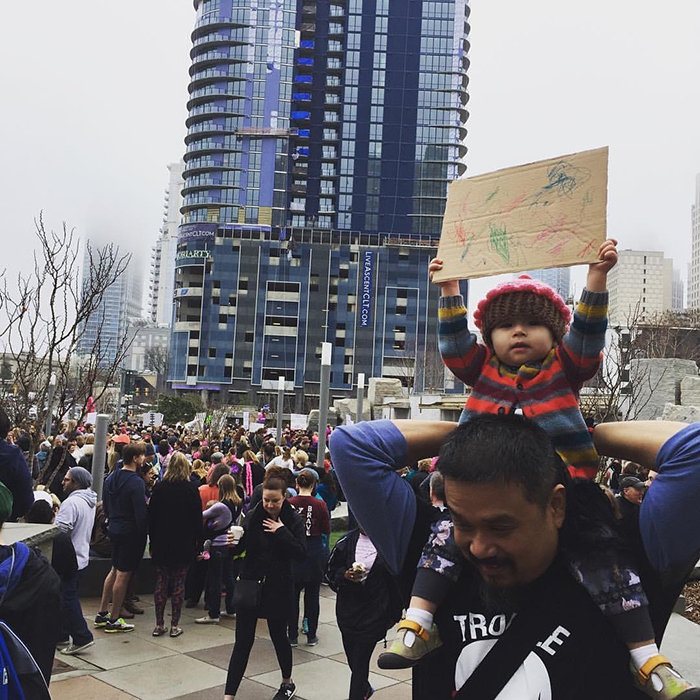 The photo of Sam and his daughter still goes viral on occasion, three years later.

“She knows everything, because she’s five,” Jenny told me Sunday morning. “She wants to be an astronaut-scientist-doctor-president. And she also wants to dance.”

Over the past four years, the picture’s taken on new lives. An artist in Raleigh painted it on the side of a building as part of a mural of protests around the world. Every month or so, Jenny will get a text to say that the photo is viral again.

But they’ve taken many more photos since. Before the pandemic, Jenny and her daughter participated in the climate march and drew a picture of the world on a sign. And at a Black Lives Matter march in Mooresville this summer, the five-year-old wrote “TODAY AND EVURE DAY, BLACK LIVES MATTARR” on one side, and on the other she drew unicorns and rainbows. Jenny’s daughter is now five and still likes to march. These from a rally in Mooresville this summer. (Courtesy Jenny Sowry)

They live in Mooresville, about a half-hour north of Charlotte. Sam is the son of Vietnamese refugees who moved to the United States in 1975. Most of their neighborhood had Trump signs, Jenny said, but they get along OK anyway. Her yard had a Biden sign, a Roy Cooper sign, a Black Lives Matter sign, and a sign with a picture of Martin Luther King.

Each night before bed, Jenny and her daughter, who she doesn’t want named, read books. One of their favorites is Goodnight Stories for Rebel Girls, a children’s series about women who’ve made a difference. They call Kamala Harris, who was born to immigrant parents and will become the first woman to be vice president, a rebel girl.

On Monday night after the bedtime stories, someone came through their neighborhood and spray-painted their yard signs, even the one of King. This wasn’t new. Over the summer, someone stomped on their Black Lives Matter signs. In any case, Jenny and Sam had to wake up on Election Day and sit down with their 13-year-old boy and five-year-old daughter and talk about why someone might do that again.

A neighbor came by with a new Biden sign. They put it up, but as a family they decided to leave the defaced signs in the yard, too, “just to let the people see what they did.”

Not only that, her daughter suggested they put the stomped-on Black Lives Matter signs back out. Jenny’s daughter said they should keep the signs up, so the people who did it would have to see what they did. (Courtesy Jenny Sowry)

Four days later, on Saturday morning, they decided not to watch election coverage. It’d been too much for too long. But just before noon Jenny got a text from a friend to tell her to turn it on.

And outside in their yard, all the defaced and stomped-on signs still stood up, spray paint and all, because the woke baby who wants to be the country’s first astronaut-scientist-doctor-president-dancer rebel girl said so. 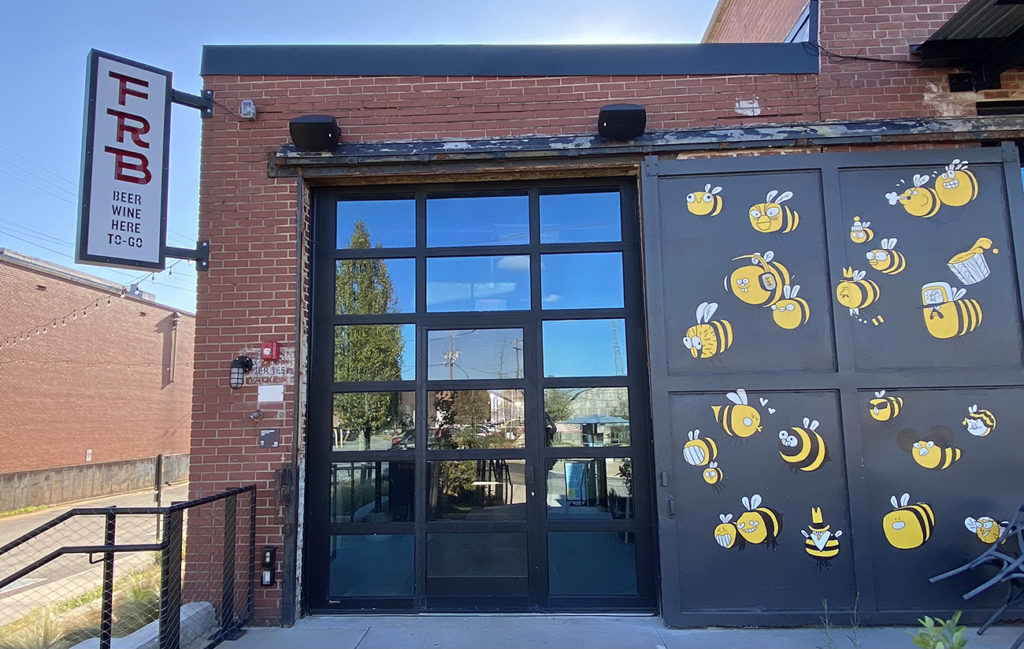 Free Range Brewing’s new taproom to open this Friday in Camp North End, a first for the complex