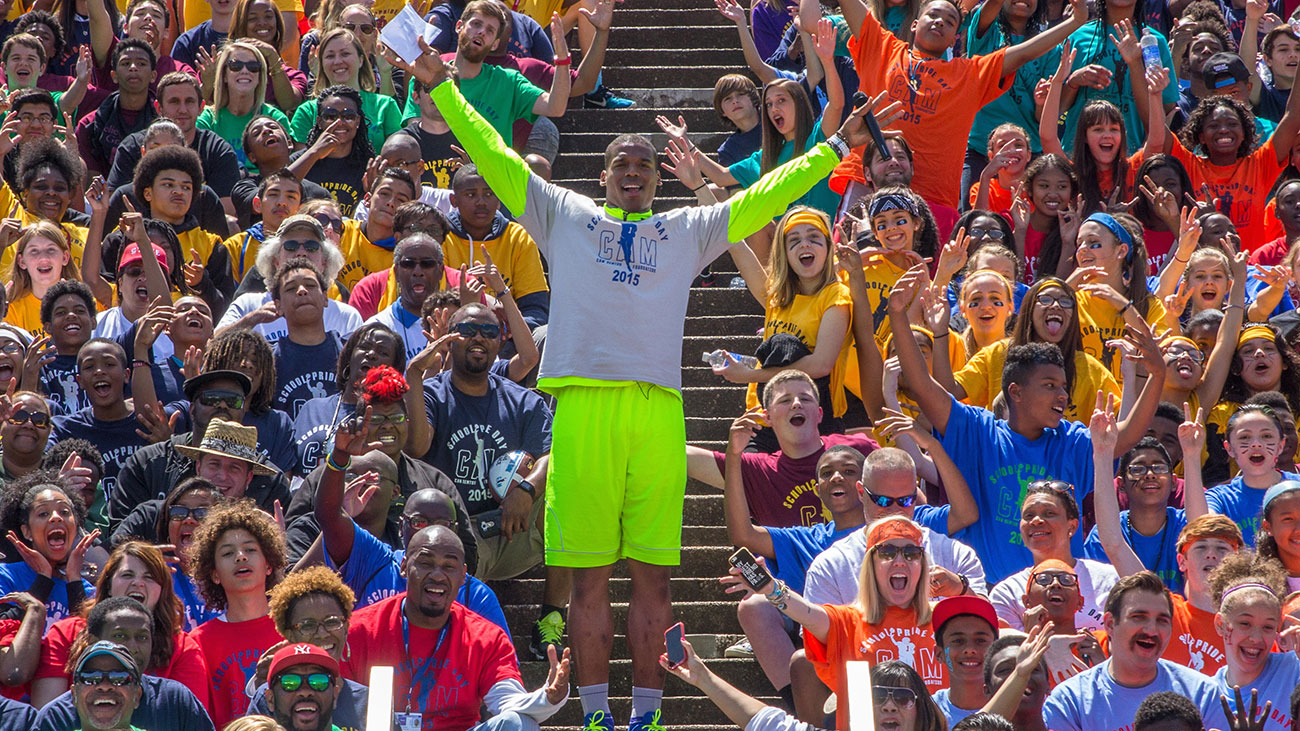 Cam Newton is perhaps the most known and highest paid athlete ever to play professional sports in Charlotte (excluding NASCAR drivers, maybe). And while he is having an average season on paper, he’s as responsible as anyone for the Carolina Panthers’ perfect record so far this season. He’s even been mentioned as a possible MVP candidate.

There’s a long way to go in the season, so if I may borrow a cliche from athletes, it’s one game at a time.

But right now, life is golden for Cam. (2) He lives in the same apartment building Uptown as Michael Jordan. The fact that Cam Newton came to Elijah’s Halloween block party, made him so happy! #prayersforelijah pic.twitter.com/w9NFmTX2ZI (5) In fact, after touchdowns, he gives the ball to a kid in the stands. Here’s an image of my friend’s nephew, Donavan, getting a ball from Cam last season. (6) Cam has his own line of clothes at Belk. Available at Belk? RT @wingoz: These are the shoes Cam Newton is wearing tonight for his Foundation benefit. pic.twitter.com/r0hBD9rP8Q (9) His favorite mode of transportation? A pickup truck. This is the new one… (10) …because last season, he was involved in an accident that totaled his other one. How tough is he? He only missed one game as a result of the wreck. (13) He’s not like other QBs. He likes to cover his head with a towel on the sidelines. (14) He infuriates opponents by doing this when he gets a first down: (15) He celebrates touchdowns by mimicking Clark Kent opening his shirt to reveal the Superman emblem. (18) And gets accused of promoting gangs. He got a little defensive and later posted this photo: (19) For all the fun and gimmicks, he takes his job and life seriously. He doesn’t drink or smoke and is a pescaterian. Last summer, he completed a sociology degree at Auburn University.

YALL CAM NEWTON IS IN MY CLASS. My life is made pic.twitter.com/f99IzdUZol

(20) He’s smart, uber-talented and perhaps the toughest QB in the league. And if he keeps the Panthers winning, will have the last laugh.

(Photo credit: Parker Anderson for image of Cam on the line of scrimmage, Cam smiling, Cam with towel on his head; Grant Baldwin for cover and other images of Cam at CMS School Pride Day; Panthers Game Day Program; Marcuse Nance)

Here are the plans for Lenny Boy’s new location