With 2 hours until polls close in N.C., here’s what we know so far 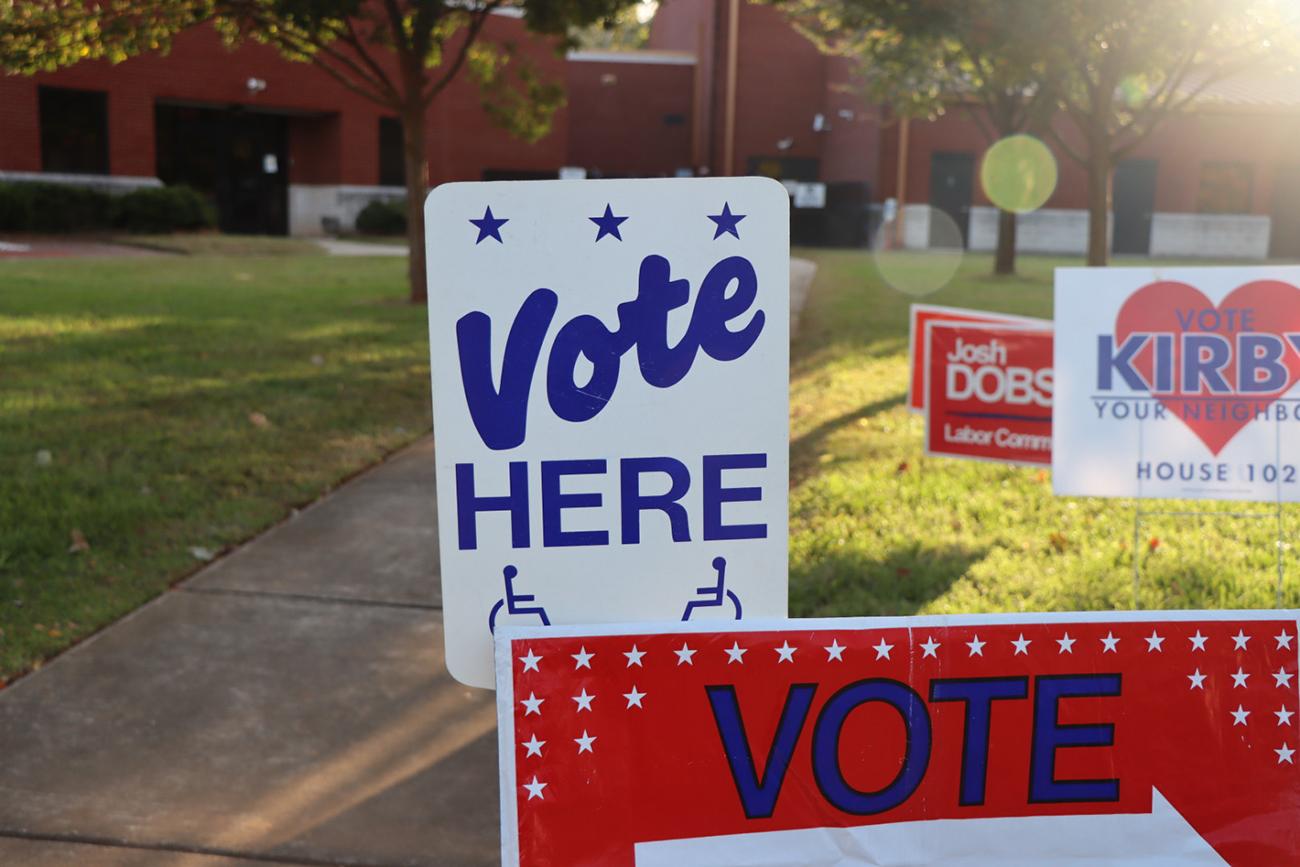 While we wait for polls to close at 7:30 p.m., and election results to start rolling in, here’s what we know so far.

The Agenda team has spent the day at various polling places around Mecklenburg County. Here’s a peek at what we’ve seen and the big stories of the day so far.

Results may take a while.

Statewide results will be delayed until at least 8:15 p.m. after the North Carolina State Board of Elections extended the deadline to vote at four precincts due to technical difficulties on Election Day.

In other states the results could be delayed much longer depending on when mail-in ballots are counted.

Voter intimidation was on many people’s minds.

A man was arrested for trespassing at Precinct 212, one of the largest Democratic polling places in the state. Justin Dunn, who voted at 212 earlier in the day, was later seen open carrying a gun at the precinct after being asked to leave. The Agenda’s Katie Peralta and Michael Graff were at the precinct during the incident. They saw Dunn circling the property while local politicians, including Mayor Vi Lyles and Congresswoman Alma Adams, spoke to media and voters.

CMPD says they were originally called “regarding Dunn potentially intimidating other voters.” CMPD PIO Thomas Hildebrand said the department didn’t have enough evidence to charge him with voter intimidation, though.

“I can certainly see how a weapon like that could be intimidating to folks. We would not want people just parading around with weapons,” said Precinct 212 chief judge Mark Henriques. “But there’s no restriction per se on just letting them vote. I understand the concerns and that’s why they called the police.”

Some noted that the situation may have played out differently if Dunn wasn’t white. “If they saw a Black man with a gun they would have emptied the whole damn precinct,” said poll watcher Tim Carmichael, a Black man.

At other precincts around Charlotte, community members made a point to watch the polls to ensure there were no incidents of voter intimidation. At Hidden Valley Elementary, I spoke with clergy members Deacon Robin Sands and Reverend Marion Sprott-Goldson, who volunteered with Lawyers and Collars to monitor the polls. 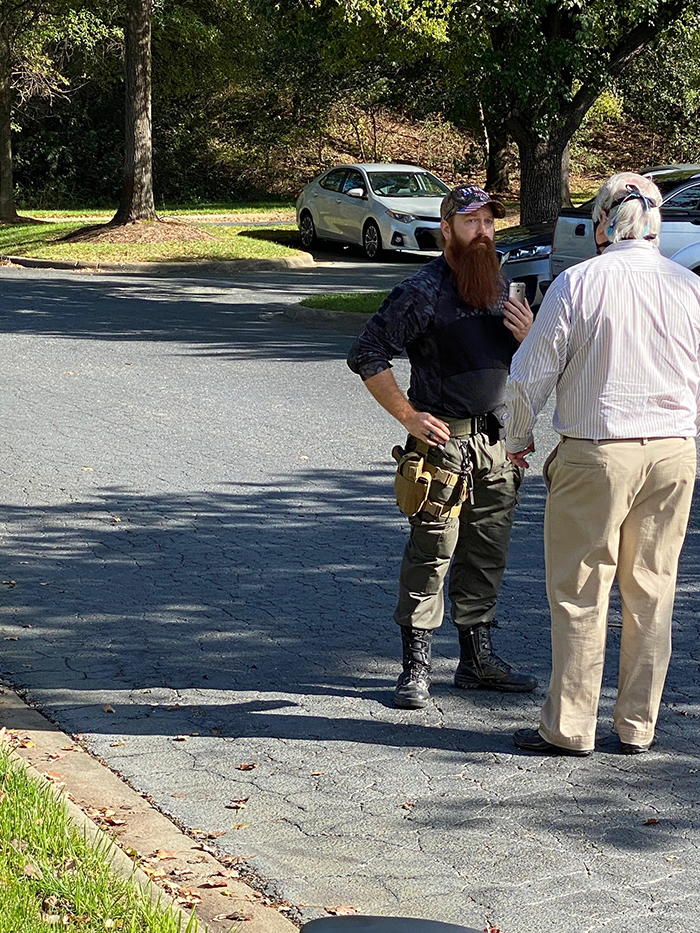 Justin Dunn, the man arrested for trespassing at Precinct 212.

After a record-breaking early voting period, lines around Mecklenburg County were, for the most part, short or non-existent. Some polling places like Precinct 22 did have lines during peak voting times, specifically early in the morning.

When asked about his message to those who haven’t voted yet, he said, “Get your ass to the polls.” The rapper would not say who he voted for.

His Vote Baby Vote initiative partnered with students from North Carolina HBCUs to give out t-shirts, hand sanitizer, and snacks to those at the polls. 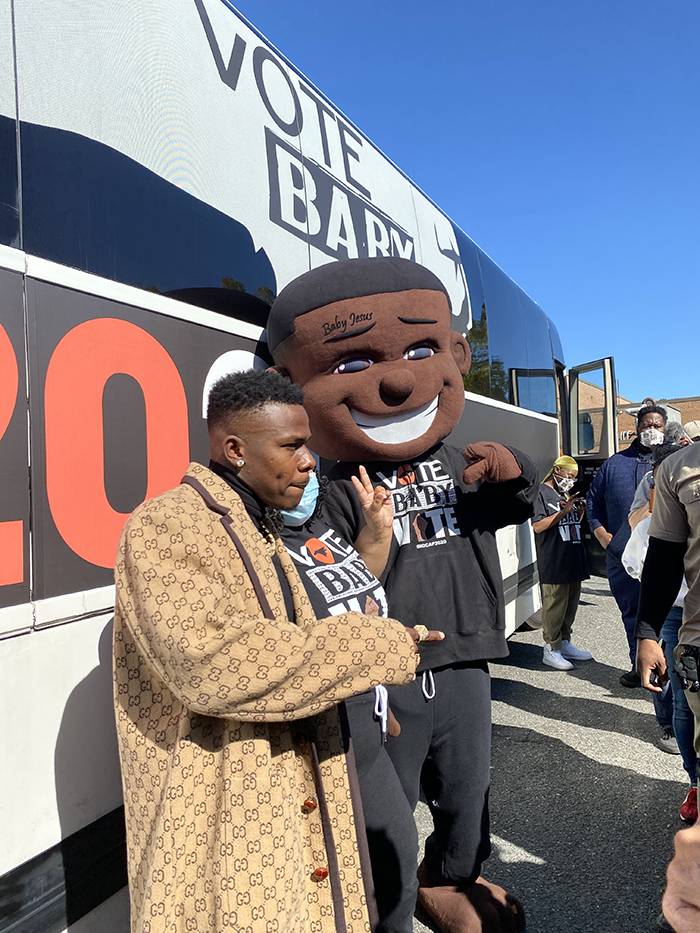 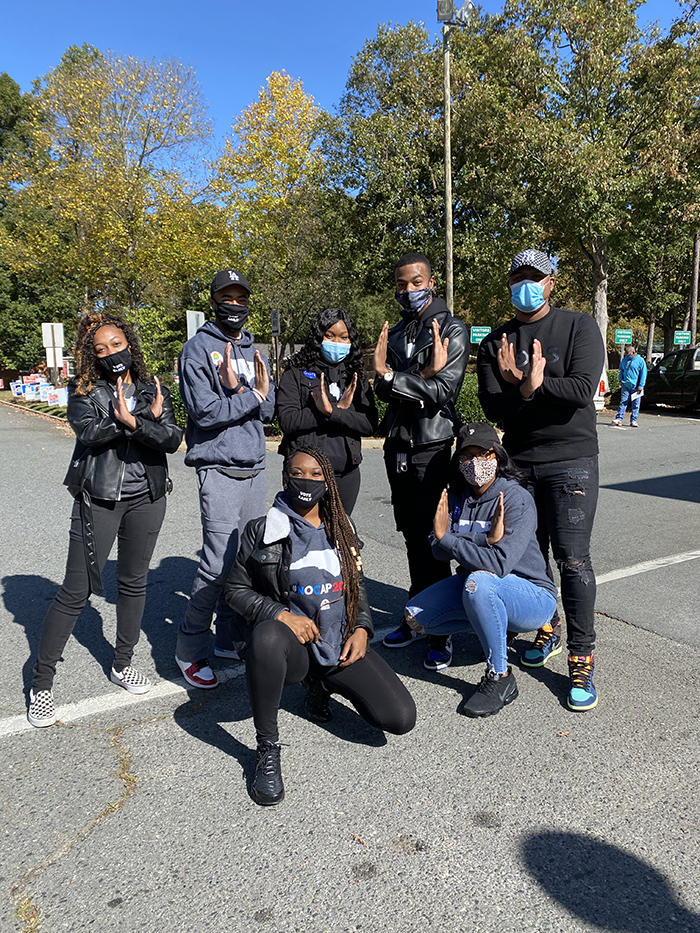 Some businesses boarded up their windows and doors ahead of Election Night. 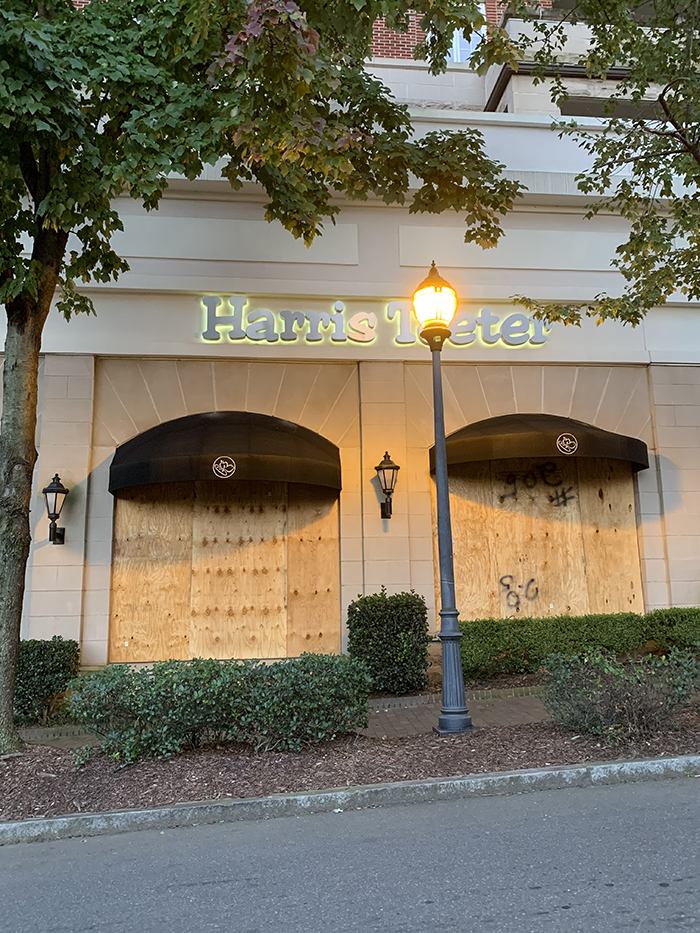 Harris Teeter boarded up ahead of Election Night.

Polls were full of young voters and volunteers.

Lots of 20-somethings at Charlotte precincts on Election Day both to vote and to volunteer.

Ten-year-old Martin Quinones, who says he’s bummed about being too young to vote, got up early Tuesday morning to hand out information for the Democratic Party. 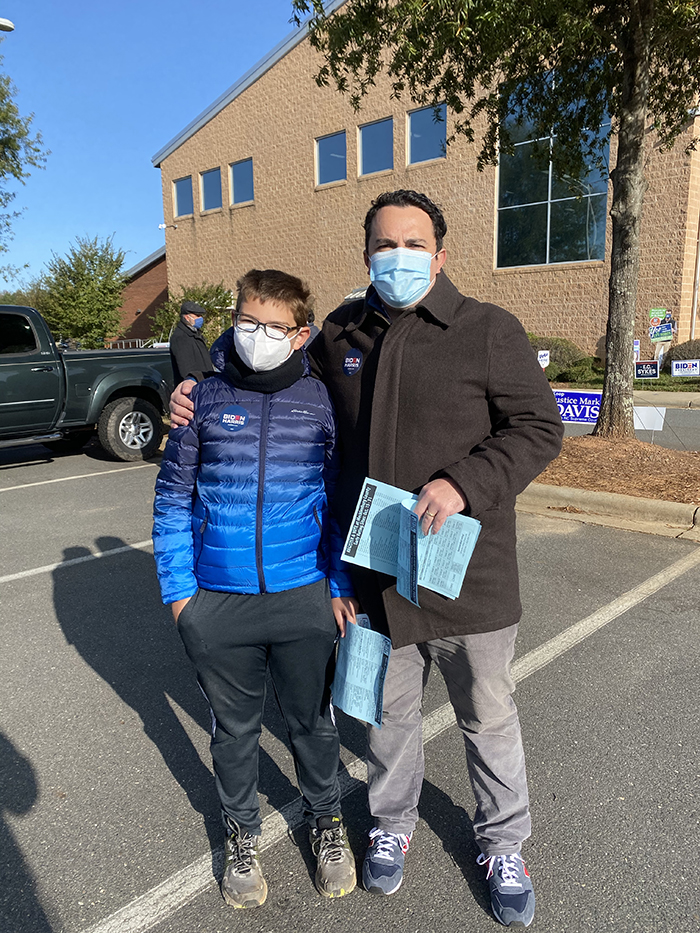 The Greeks dressed to impress. 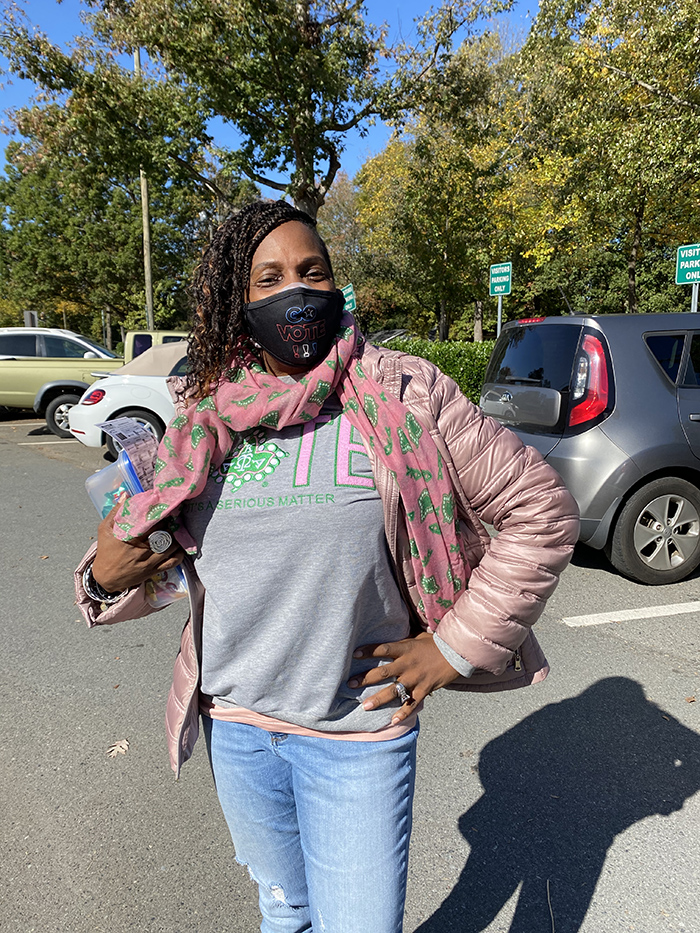 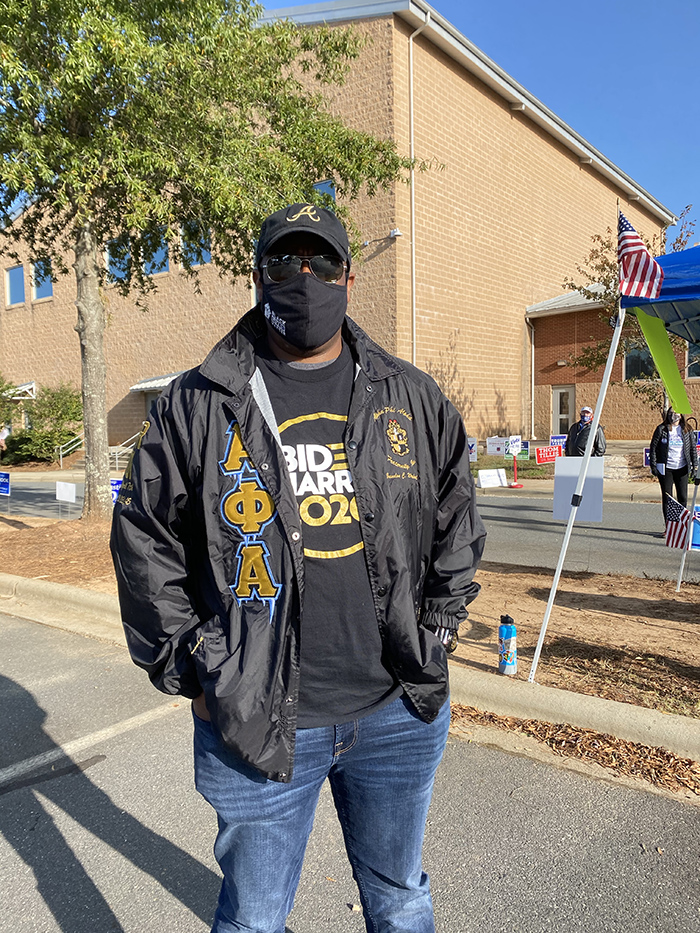 Some voters got free food from places like Harriet’s and Krispy Kreme.

Other voter perks included free rides to the polls, discounted coffee, and discounted apparel. Get the full list, here.

We will continue updating this story throughout Election Day. 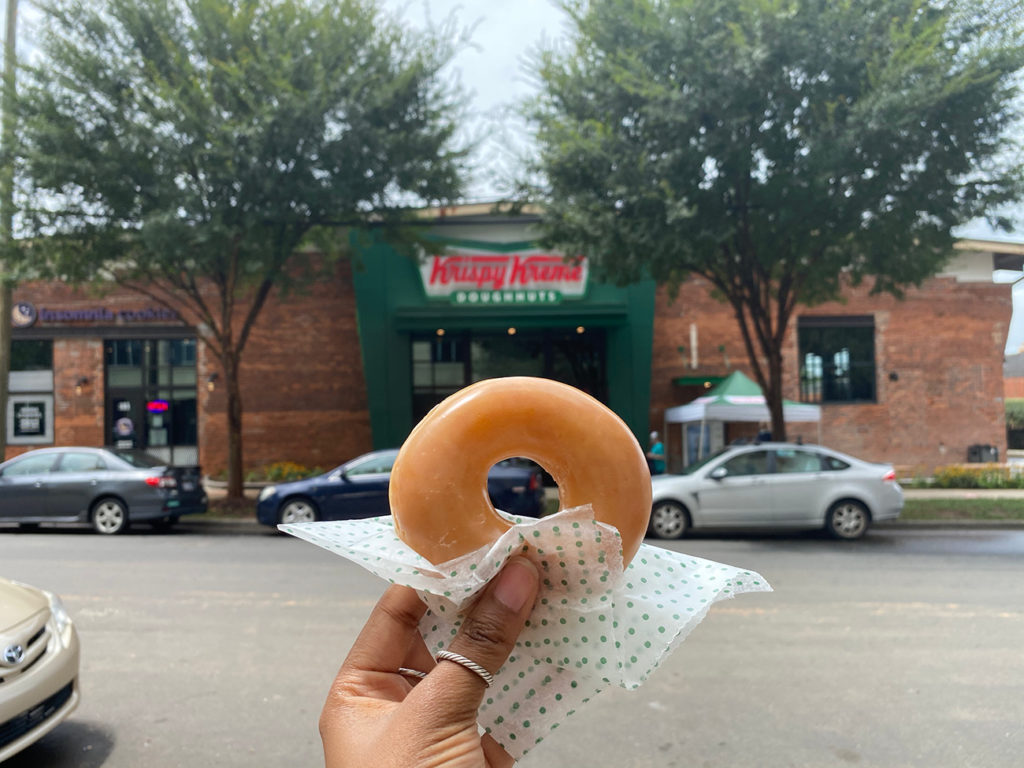 Watch parties, voter freebies, and more things to do this Election Day in Charlotte