What happened with the MLS plans for Eastland? 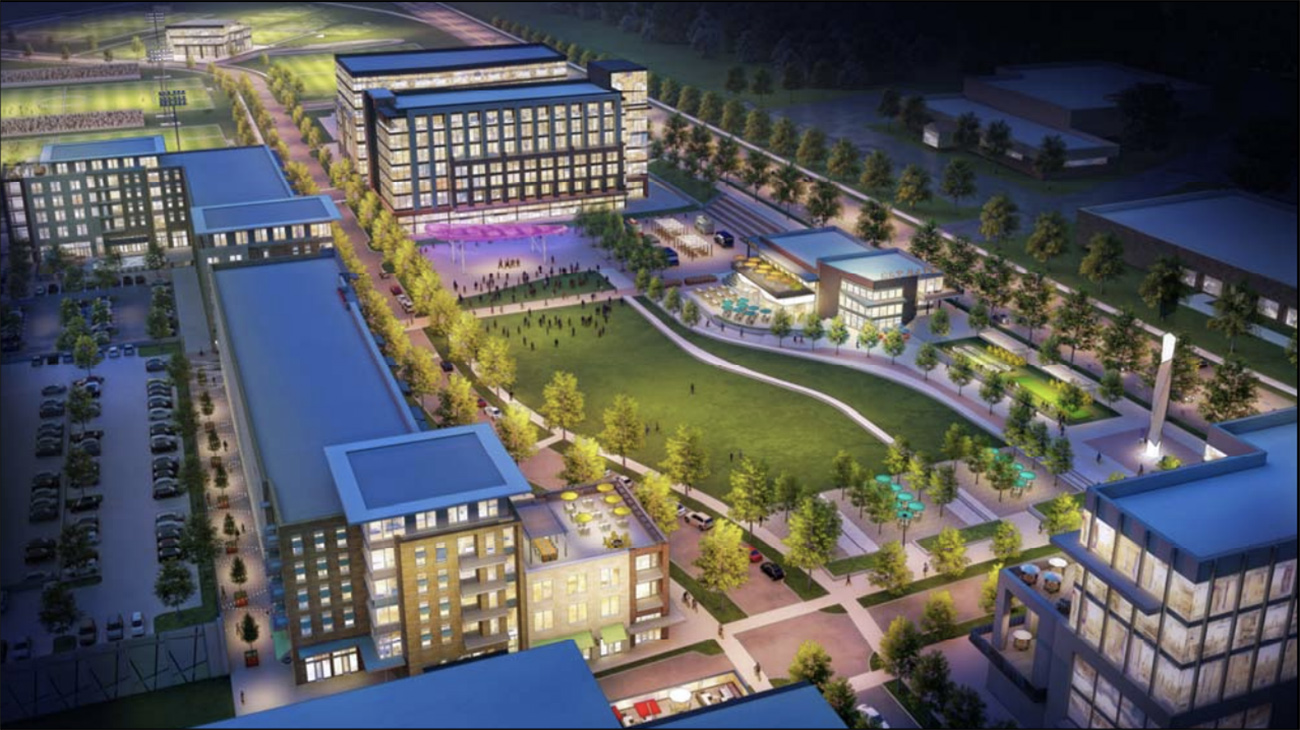 Charlotte’s Major League Soccer team headquarters will be at Bank of America Stadium, not at the Eastland redevelopment. That’s a shift from the original public-private deal planned for Eastland, as the city had touted an MLS HQ as a key part of a plan to revitalize the Central Avenue corridor.

Having a major league sports franchise as a project anchor gave Eastland a sort of sexiness. Losing it — or at least not knowing where else it’d go — made some wonder whether the project lost some of its luster.

In a presentation this past week about the redevelopment of the old Eastland mall site, the team behind the project disclosed fresh details but left some big lingering questions unanswered. Among them: What happened with the MLS plans for Eastland?

The reasoning behind the decision not to base the MLS offices there is actually much less contentious and dramatic as recent headlines would make it seem. It’s not that the MLS is abandoning the Eastland site. Charlotte isn’t in danger of losing a pro soccer team that hasn’t even started playing yet, either.

Rather, it’s in part a cost-saving measure.

Like other entertainment businesses during the pandemic, Charlotte FC owner Tepper Sports & Entertainment, has grappled with lost revenue — from big postponed concerts to limited fan capacity at NFL games. Capacity limits remain at Bank of America Stadium, and with coronavirus cases rising locally, it isn’t likely that the stadium will be packed with fans anytime soon. 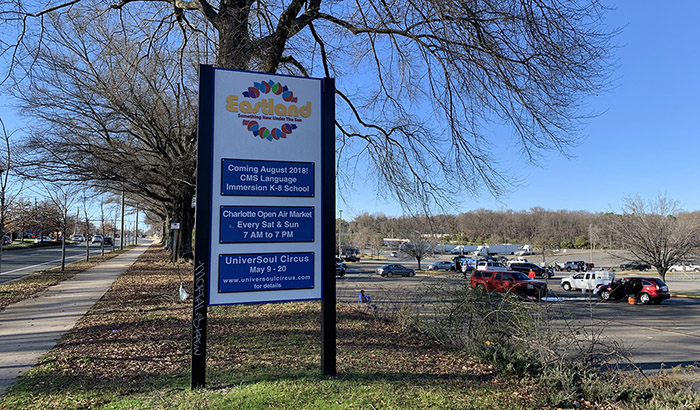 The Eastland Mall site in east Charlotte, which has sat mostly vacant since the once-popular mall closed in 2010.

Tepper Sports isn’t alone in reexamining the need for brand new offices in a post-pandemic world.

Over the summer, for instance, REI decided to abandon its nearly completed campus outside Seattle. Instead, it’s spreading corporate operations to other sites around Seattle. In the Charlotte area, office leasing is stagnant, CBJ reports, and tenants are looking for more flexible lease terms.

“When you don’t have to build a headquarter building like we had been talking about, and you can house it at Bank of America Stadium … and create some efficiencies, there’s some savings to that,” says Tracy Dodson, assistant city manager and economic development director. “Nobody really knows what the future of office looks like.”

From an operational perspective, having the headquarters at Bank of America Stadium, where Charlotte FC will begin playing in 2022, makes sense, Panthers chief operating officer Mark Hart tells the Agenda.

Currently, the Panthers team is building a $1 billion, state-of-the-art headquarters down in Rock Hill. The plan is to open the campus, complete with everything from new offices to indoor/outdoor training facilities, in 2023.

“When the Panthers move out of here, we’ve got a lot of office space they can move right into,” Hart says of Bank of America Stadium.

“MLS is an urban-centric sport and it just fits better (Uptown), I think.”

Having everyone under the same roof will help, Hart says.

Additionally, the idea of an MLS headquarters might be sexier than the offices themselves.

The original plan would have brought 20-30 employees to the Eastland site, Hart says. The building itself would have been small — about 30,000 square feet — with a modest sized parking lot.

Not having that building doesn’t really free up a lot of space, says Tim Sittema, managing partner at Crosland Southeast, Eastland’s master developer.

“It was more important from a marketing standpoint,” Sittema says. “But the headquarters facility didn’t contribute to the activation of our site as much as the academies and the soccer fields and the leagues and all the teams that are going to be going there.”

Eastland will still have a big soccer component that project planners say will bring people from all over to the site: The MLS academy headquarters. That’ll be a 15,000 square-foot facility employing up to 65 part- and full-time workers, according to the city.

A few other details of the new plan for Eastland:

The latest vision also includes a more concrete timeline for the planning and creation of an Uptown entertainment district. That’s something that David Tepper has been talking about since he bought the Panthers in 2018. Panthers officials like Hart say the district could resemble the North Shore redevelopment in Pittsburgh, near Heinz Field.

Think of the Uptown district as a walkable mixed-use destination surrounding Bank of America Stadium, filled with restaurants, bars, and entertainment venues. It could someday include a Silver Line stop, the city says. It could be a branded neighborhood with its own identity, like NoDa and South End are, Hart says.

Tepper Sports is already working on developing a master plan for the district and will be doing so through 2021. That plan will help inform the future of the stadium, Hart says. Ultimately, the goal of the whole Uptown project is to be in business 365 days a year.

“Whether it’s a renovated Bank of America Stadium or a new stadium, these assets are so expensive. We have to be in business year round,” Hart says.

For work on the Uptown district, the city is committing $25 million in hospitality funds, which state law requires must be used for tourism activity. Eastland will get $10 million.

That commitment is a major change from the $110 million the city promised last year, when MLS awarded Charlotte an expansion team. 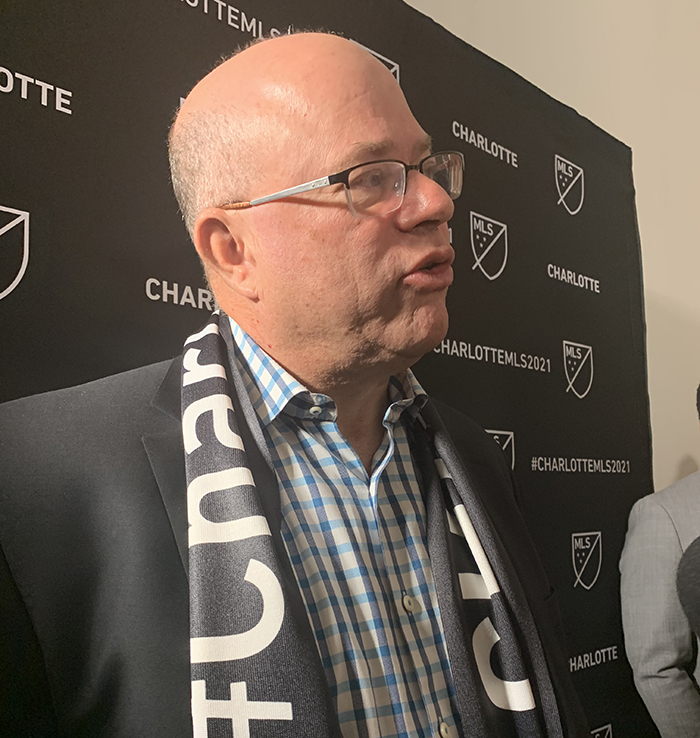 David Tepper speaks to the media during the MLS announcement at the Mint Museum in Uptown Charlotte on December 17, 2019.

At that time, Charlotte hadn’t decided on how the total would be allocated.

“This new deal still forces us to think about the long-term vision. But what we took was, what do we just need to spend right now to make Eastland happen, to make MLS happen?” Dodson says.

City council will vote on the Eastland proposal on November 9.

For city councilman James Mitchell, the new vision for Eastland will make the property even more of a destination.

East Charlotte is an international corridor with its own personality and a love for its small businesses. The academy, Mitchell says, will help bring to life the feeling that Eastland once again is a gathering place.

“My vision has always been, let’s bring back that same model.” 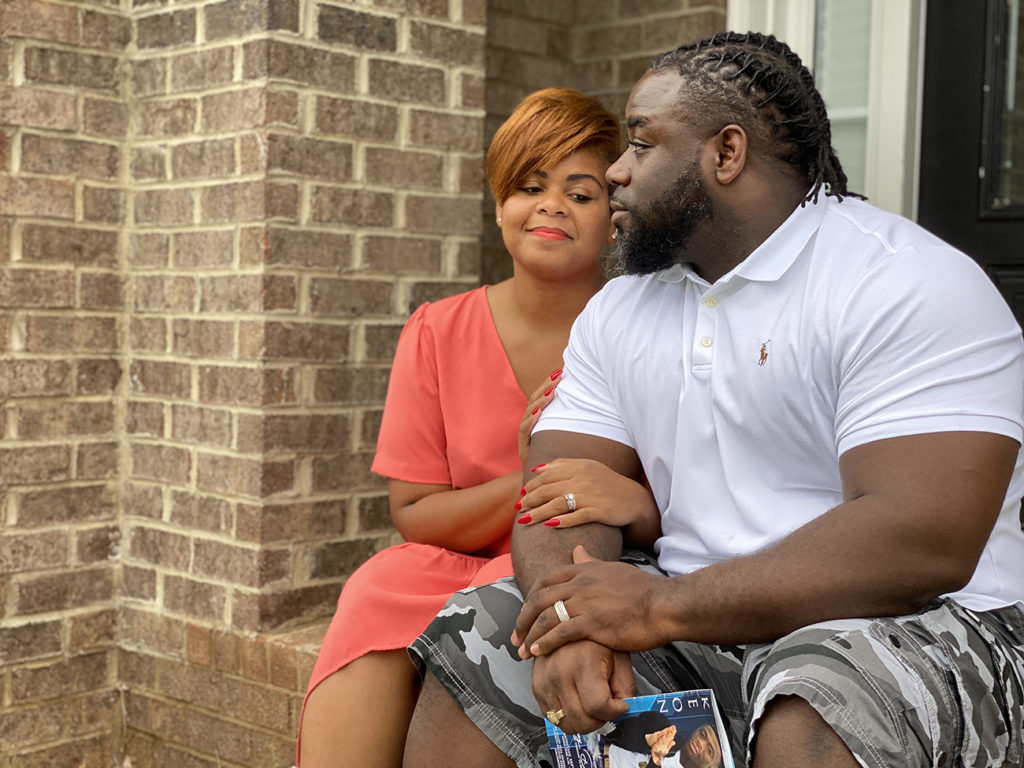 Lulu’s gave Charlotte a real Maryland crab cake. Now it’s expanding. But first, for the owners, a world of grief