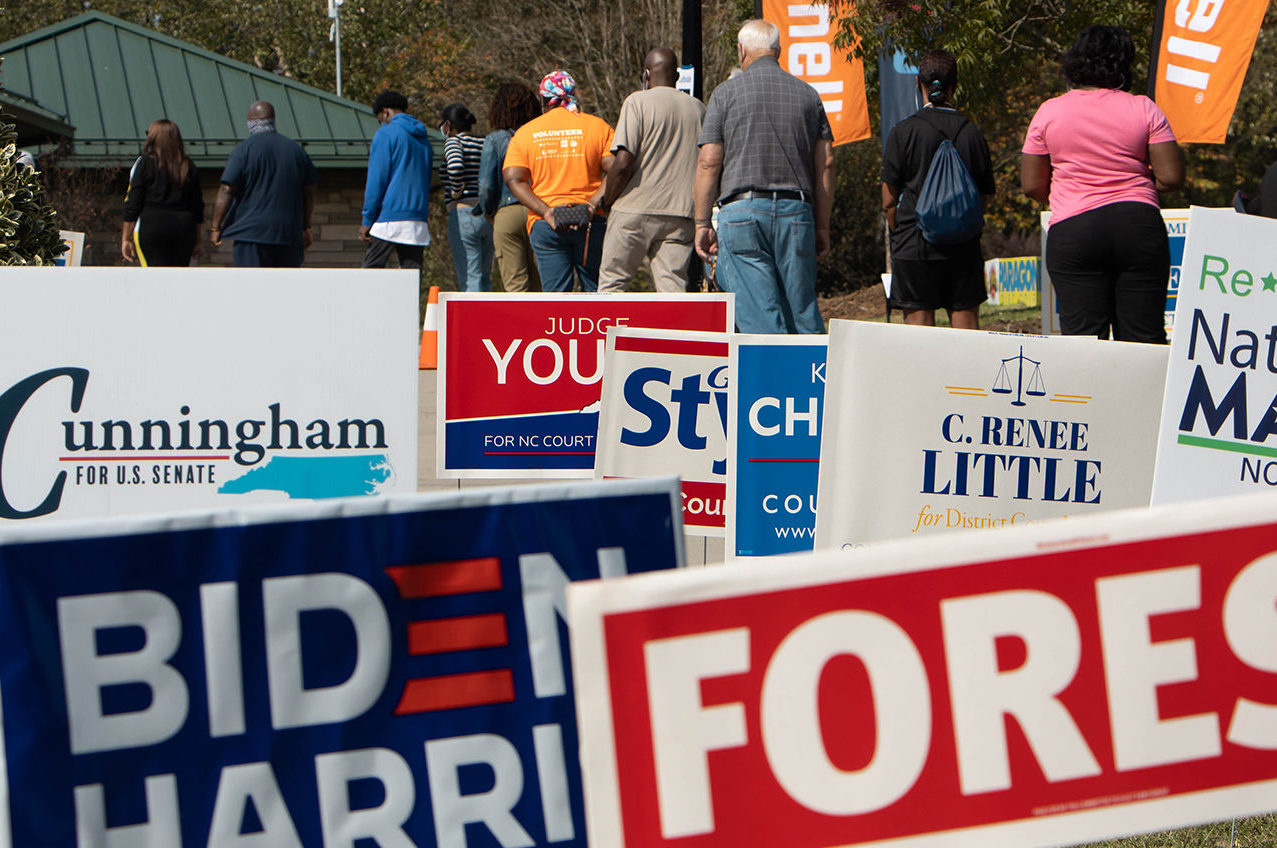 At Allegra Westbrooks Library on Beatties Ford Road on Thursday morning, I met an Army veteran who built a supply route over the Himalayas during World War II. He’s 95 years old now, and after I thanked him for his service he told me he’d been waiting for two hours in line to vote.

“At least it’s not as bad as building a road over a mountain?” I asked.

“Well,” he said, rolling his eyes and laughing. “Coulda been better organized.”

Then he said, “But we’re not going anywhere.”

James McCoy was in the passenger’s seat of the car his daughter, Doris, was driving. James’s wife of 72 years, Mary, was in the back seat. They were waiting for their curbside ballots on the first day of early in-person voting in North Carolina, and they were staying until they turned one in.

Like the McCoys, most of the 300 or so people at the library waited two-and-a-half hours. But they weren’t alone. The lines were similar at West Boulevard and in University City. All around the city and state, people showed up like it was the actual Election Day. The weather was crisp and bright, and the feeling was festive in a way it hasn’t been most of this year. About 272,000 people voted Thursday in North Carolina, and about 35,000 of those were in Mecklenburg County. 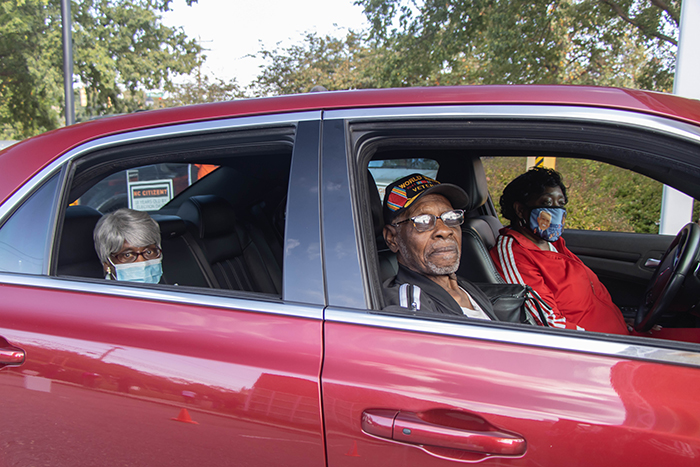 James McCoy met his wife Mary (back seat) at Newell School. They’ve been married 72 years and have nine children, including their daughter Doris.

James McCoy, who first registered in 1962, said he hadn’t seen much like it in all his years. He grew up in Newell, a north Charlotte neighborhood, in the 1920s and 30s. He met Mary at Newell School and they had nine kids — seven boys and two girls — and a whole bunch of grandkids and great-grandkids.

While he waited on his ballot, he reached into his wallet to show me something. It was an old milk bottle cap back from when he and his family had their milk delivered to their house.

His point was made; he knew a world I didn’t. When I asked him what he believed was the source of the voter turnout in places like Beatties Ford on Thursday, he stopped laughing and gave me a straight face.

“To me it means taking our country back,” the retired Army technician said.

Mecklenburg County’s 33 early voting sites will be open every day until Halloween. They are scattered all across the county, in urban neighborhoods and suburbs, in Black parts of town and white, where Republicans live and where Democrats live. At libraries like Beatties Ford, and at high schools like Olympic, and town halls like in Cornelius, at parks like Hornet’s Nest, and elementary schools like Matthews.

That’s where Louie Strickland and his wife, Shirley Hoover Strickland, voted. They’ve lived in Plantation Estates retirement community in Matthews for the past three years. Louie is 86 and originally from Hamlet. The first time he voted in a presidential contest, he picked Dwight Eisenhower. They waited about a half-hour on Thursday to vote.

They wore masks, even though they said they’re not scared of Covid-19.

“I don’t know that you can hide from what’s going on in the world,” Louie said. “We’re getting on with life and making the most of it.”

Was there a candidate they were especially excited about voting for?

“Of course,” Louie said, but he wouldn’t elaborate.

Shirley said her maiden name and current middle name, “Hoover,” is a hint. 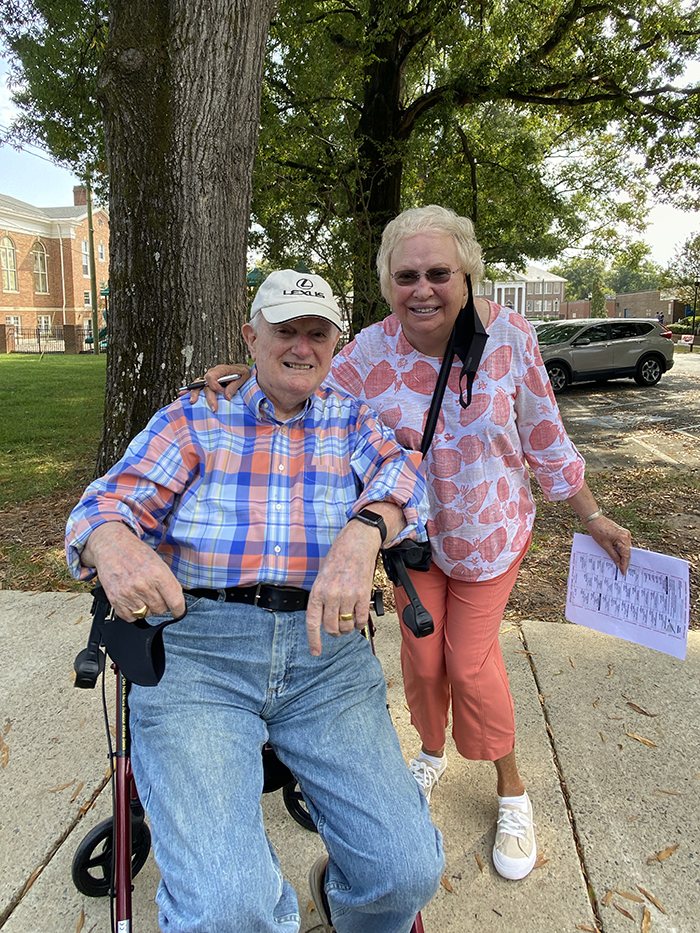 Louie and Shirley Strickland voted at Matthews Elementary. They only took their masks off for the photo.

I’ve gone to polls as a reporter for five presidential elections now, and all I’ve learned in that time is that it’s foolish to draw many conclusions from anecdotes.

But Thursday was less about the results than the act. Of doing something. Of being part of something again. Based on what I saw at the four locations I visited and the reports from the rest of our Agenda team, Thursday was like a pressure release for the people who voted.

To be sure, lots of folks want no part of voting in-person. More than 500,000 North Carolinians have mailed in absentee ballots already, and another 1.5 million have requested them. Many of those who came out on the first day, though, said they just wanted the experience. (Note: If you have requested a mail-in ballot but now want to vote in-person, you still can. If you’ve already mailed yours in, stay home.)

In some cases, the people who came out Thursday had been inside for the better part of seven months, waiting on a pandemic, and now, under long and puffy clouds and a whole bunch of sun, they’d felt community again. People drove by polling places honking horns and hollering hell yeses.

At the Spectrum Center in Uptown, there were 38 voting booths, and hardly any wait. Same for Bank of America Stadium. At Olympic High School in southwest Charlotte near the booming Steele Creek area, maybe a five-minute wait. But at West Boulevard and Beatties Ford, in the heart of two historically Black neighborhoods, cars were backed up for miles.

I told a few poll workers they needed some of those airport employees who go around whispering, “You know, Terminal E has a shorter line.”

But some people didn’t seem to want a shorter wait. They wanted to vote in their community.

Juanita Pyant, a retired county employee, wore a shirt that read, “This is my retirement uniform,” and she stood in line next to LaDreya Reed, whose shirt read, “To Do List: Nada.” Together the T-shirt wearers made a statement that many made — it doesn’t matter how long it takes; they’re voting. 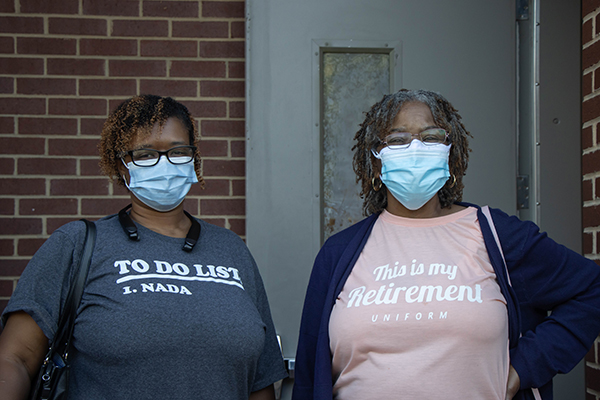 LaDreya Reed and Juanita Pyant didn’t know each other before they met at Beatties Ford Library. But they like similar T-shirts.

Not far from them, Sheila Neal-Moultry stood in the grass, moving along with the line.

Sheila is a Mecklenburg County native who grew up near the Charlotte-Huntersville line. She hasn’t been out much this year at all.

Her mother grew up in Huntersville, she said, at a time with colored-only signs. Her mother taught her the importance of voting at young age, and later in life, Sheila returned the favor. In 2016, Sheila drove her mother, then in the early stages of Alzheimer’s, to the polls to vote. The disease kept getting worse over the next three years.

And then, in May, people in Sheila’s family started to get sick. Covid-19 spread fast and cruelly, and it found Sheila’s mom, who died a few weeks later.

When I asked what her mom would think of the voting experience Thursday, Sheila choked up and laughed: “She would go, ‘Oh, my God, it’s such a long line. But we’re gonna do this.’” Sheila Neal-Moultry dropped her granddaughter off and then waited 2.5 hours to vote on Thursday.

I grew up in a rural area, down a gravel road, so far from other kids that when my mom told me and my brother to go climb a tree, it wasn’t an expression but a damn good idea.

We became friends with “ghostmen” and made up games that nobody else would understand. The biggest place I’d lived before moving to Charlotte was Greensboro. This city, for most of my time here, has seemed like an adult amusement park. I never tire of the skyline, like some people do. Never tire of seeing people from all different backgrounds and speaking different languages.

This year, in ways I don’t think we’ve even quite realized, has been agonizing. I’ve told friends recently that living in Charlotte during a pandemic, you get all the troubles of the city without the joys. Frustration in tight spaces leads to violence; traffic’s back; our local elected leaders bicker every week. There’s no release from it, no live music or arts festival or big-old Panthers tailgates.

But on Thursday morning with all those people lined up to vote, smiling and re-calibrated after casting a ballot, it reminded me, maybe for just a day, of the city I knew. 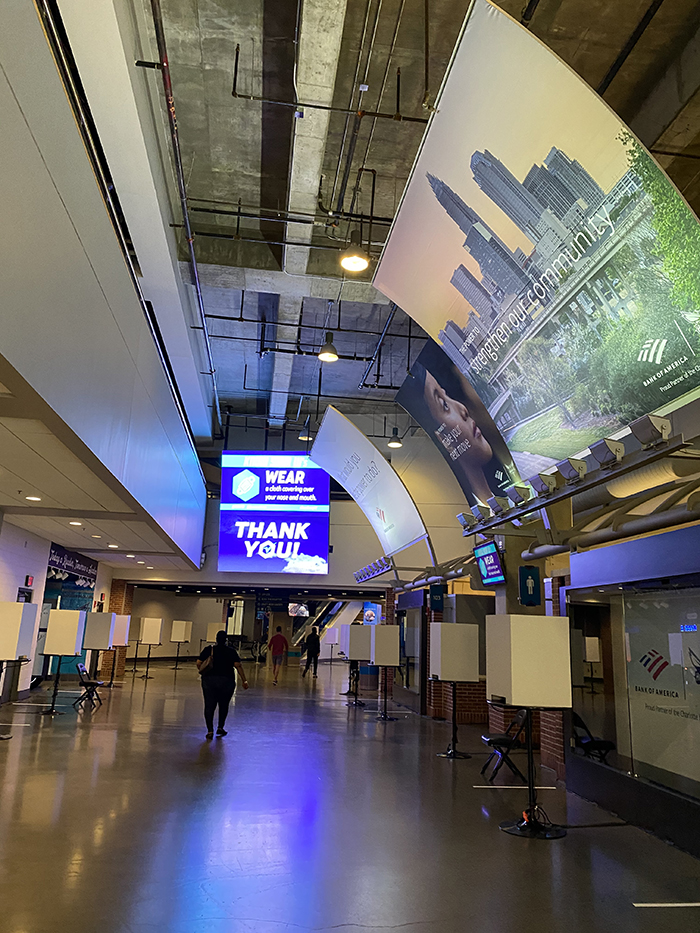 There was no line at Spectrum Center.

I went Uptown in the middle of the day and walked into the Spectrum Center just after noon. I can’t remember the last time I was there.

A poll worker smiled and told me to come on through. The electronic screens flipped with messages, “Swarm the vote!” I was only three people back in line. I walked through and was directed to a table with a nice woman in a red coat who asked my name and address and put a sticker on a card.

Above my voting booth, I could see pictures of Muggsy Bogues and Alonzo Mourning. I punched the single-use pen against the screen for the 40 or so races. I printed my ballot, walked it down the concourse, and slid it into the counting machine, which was set up near the Center City Grill and Center City Bar, where I’d give anything to gripe about the price of a beer and hot dog again. Then I walked back out into the mostly quiet Uptown streets, feeling good about being in that place where big things happen again, doing the biggest thing we can do.

It was so fun I wanted to do it again!

Emma Way contributed to this report. 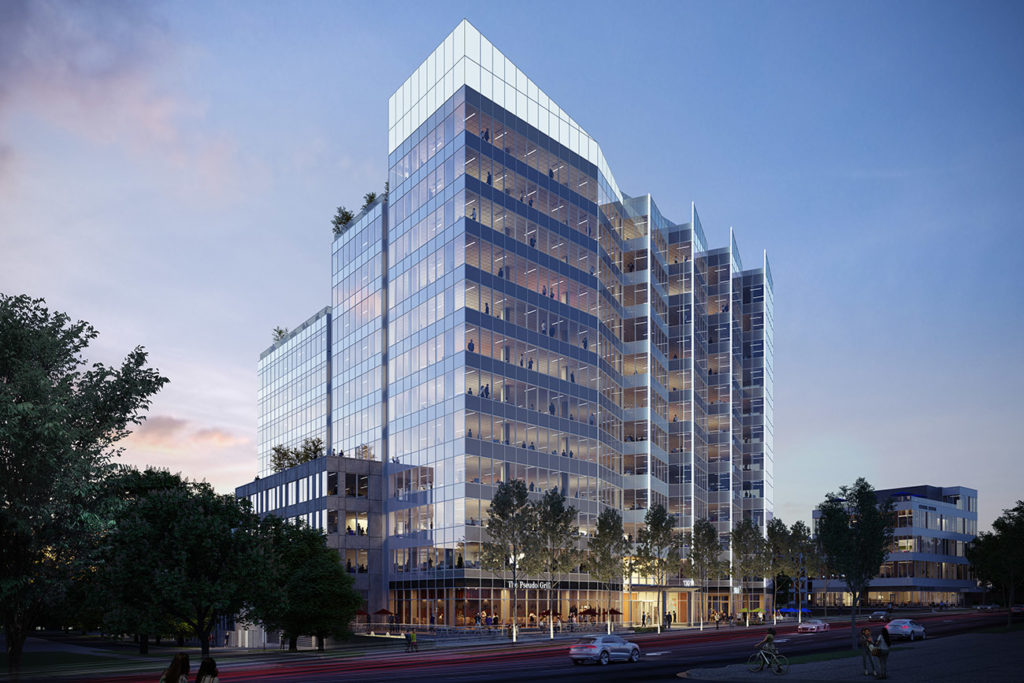