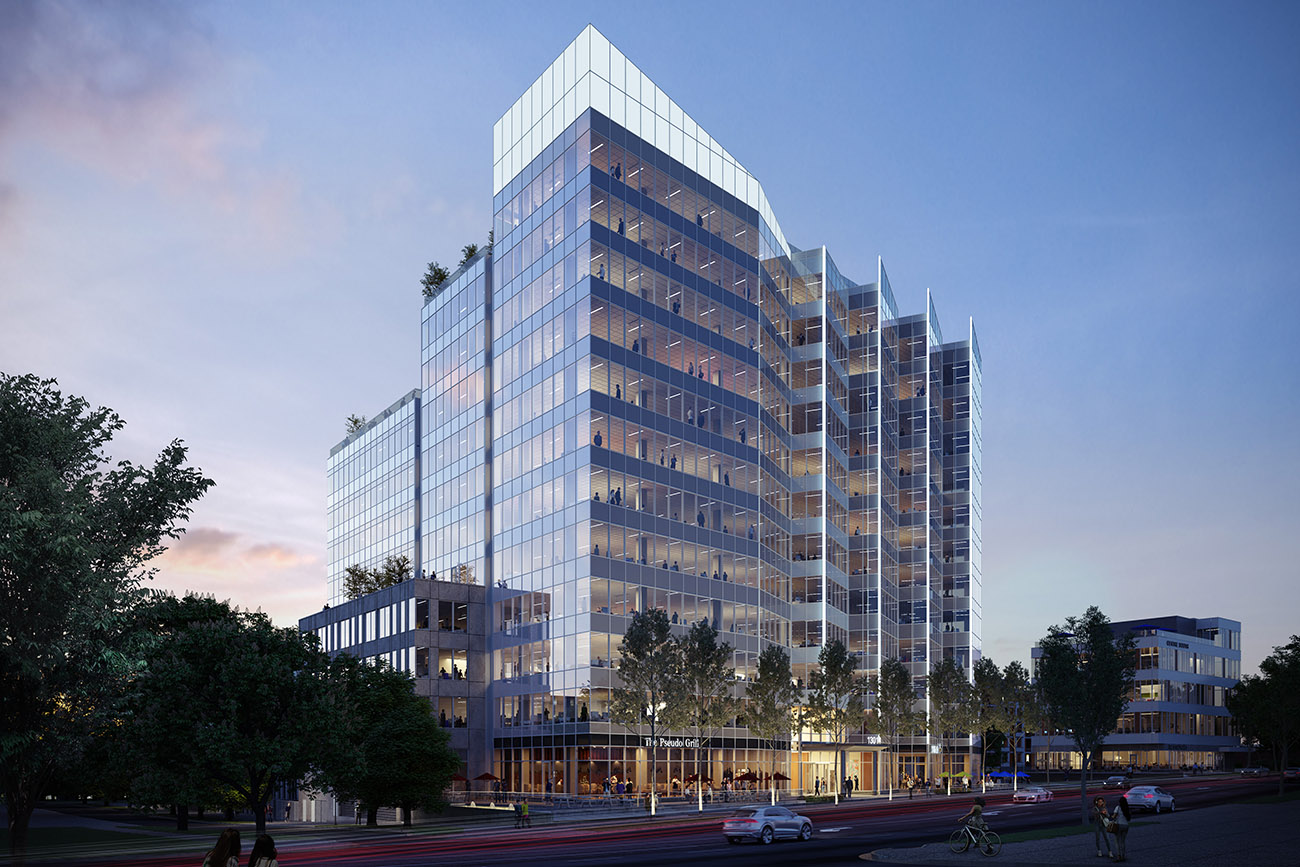 After years of planning, a Boston developer called The Fallon Company has unveiled plans for a major mixed-use development on a 16.7-acre site on the edge of Dilworth, where Strawn Cottages once stood. Called Centre South, the $400 million project will include affordable housing, retail, a hotel, and office space.

Down the street from the Dowd YMCA, the Strawn Cottages property is a big open field off South Boulevard and along South Caldwell. There’s still a senior living apartment tower there, as well as a parking lot. For a site that has sat otherwise quiet for years, Centre South could be a transformational project that brings new energy.

All told, the 1.4 million square-foot development will have 750 residential units, according to the developer. With plenty of public green space, Centre South will create a “vibrant and dynamic connection” between Dilworth, Uptown, and South End.

For the project’s first phase, expect housing and a 310,000 square-foot office building. Construction will begin in 2021.

“As we’re talking to potential tenants with varying business focuses, it’s clear Centre South is well-suited to serve as home-base to entities ranging from professional services firms to technology companies, from headquarter-caliber businesses to marketing agencies, and just about every other business in between,” Stumler says.

As Centre South is a partnership with Inlivian, formerly the Charlotte Housing Authority, a key element of the development is affordable housing.

The Strawn Tower has about 170 units for residents 55 and older. A few years ago, Inlivian, which owns the tower, did renovations on the property. It will remain as part of the Centre South project.

“Centre South represents a multi-year collaboration with the City or Charlotte, Inlivian, and the community to set a new benchmark for inclusivity in Charlotte development,” said Michael Fallon, president of The Fallon Company. 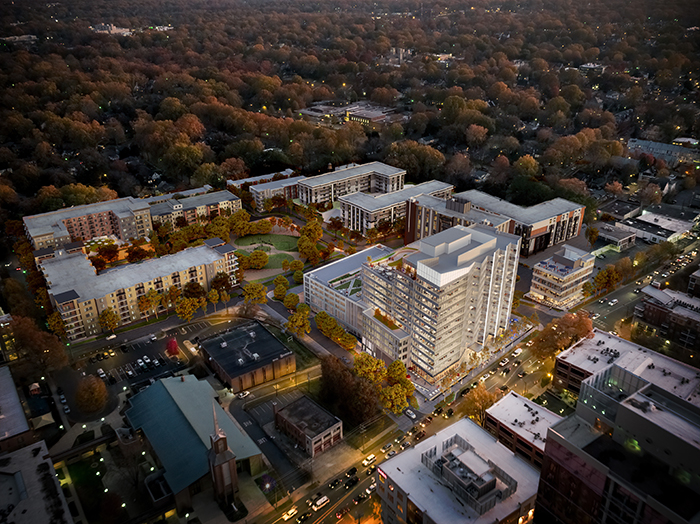 Here’s a look at what the development will look like when it’s done. Look out for fresh renderings of the project soon. (Renderings courtesy of Shimahara Visual)

A redevelopment of the Strawn Cottages site is years in the making.

Zoom out: The single-story cottages opened in October 1971 as public housing for elderly residents, according to Charlotte Observer archives. The cottages were part of a $4 million project designed to give “a feeling of openness without fencing and security guards.” The Observer wrote in summer 1975 that residents found the cottages “scary” because of a string of petty crimes there.

Eventually, the cottages were torn down.

In 2008, Urban Land Institute released a study about the property. In it, ULI recommended transforming the site into a community with affordable housing, retail, and offices. “The CHA must begin to think about the Strawn site as a neighborhood, not as a project. For too long, the Strawn site has been seen as a blemish on what is otherwise a classic success story for neighborhood revitalization,” ULI wrote.

In 2010, Inlivian had the site rezoned, according to the Charlotte Business Journal.

Four years ago, Inlivian selected The Fallon Company to be the master developer of the project.

Setbacks: The redevelopment promised a hotel, housing for low-income residents, restaurants, and a public park and amphitheater. At the time, Inlivian CEO Fulton Meachem predicted it would be “one of the most exciting projects in Charlotte,” the Observer wrote in 2016. The project was to break ground in 2017.

By 2018, the project was still stalled. Supposedly the city was doing infrastructure upgrades on the site.

In response to an editorial criticizing the housing authority for the delay, Meacham wrote in a 2018 viewpoint article that “flexibility is necessary in any development process.”

“Patience is a virtue, but we understand it’s not popular when the demand for inclusion is rightfully so urgent,” Meachem said. 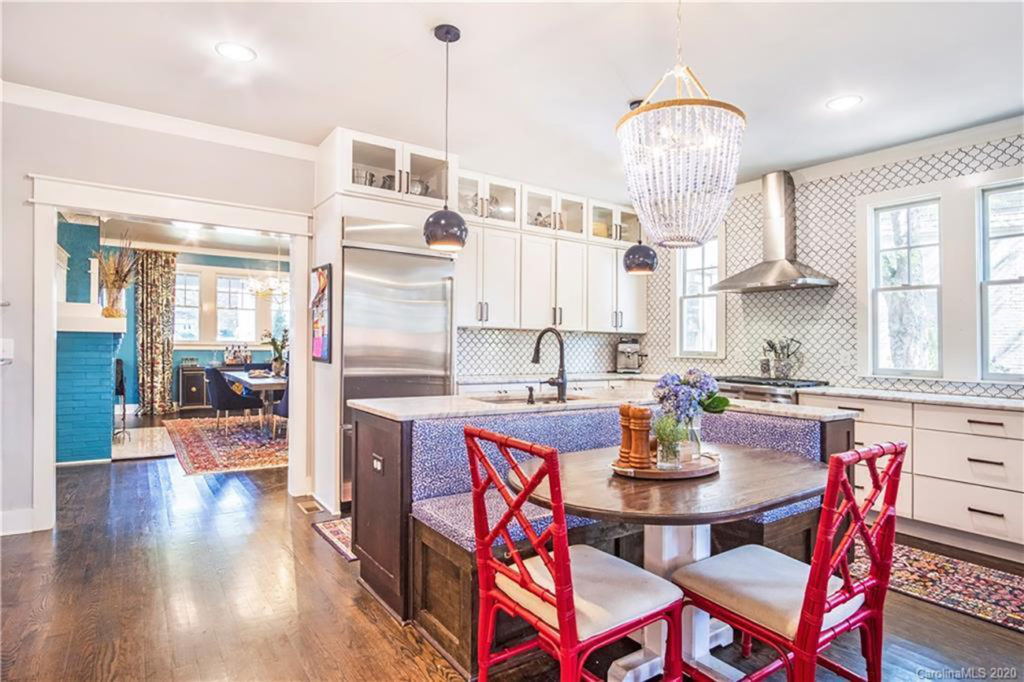 Hot Homes: 10 houses for sale in Charlotte with great kitchens