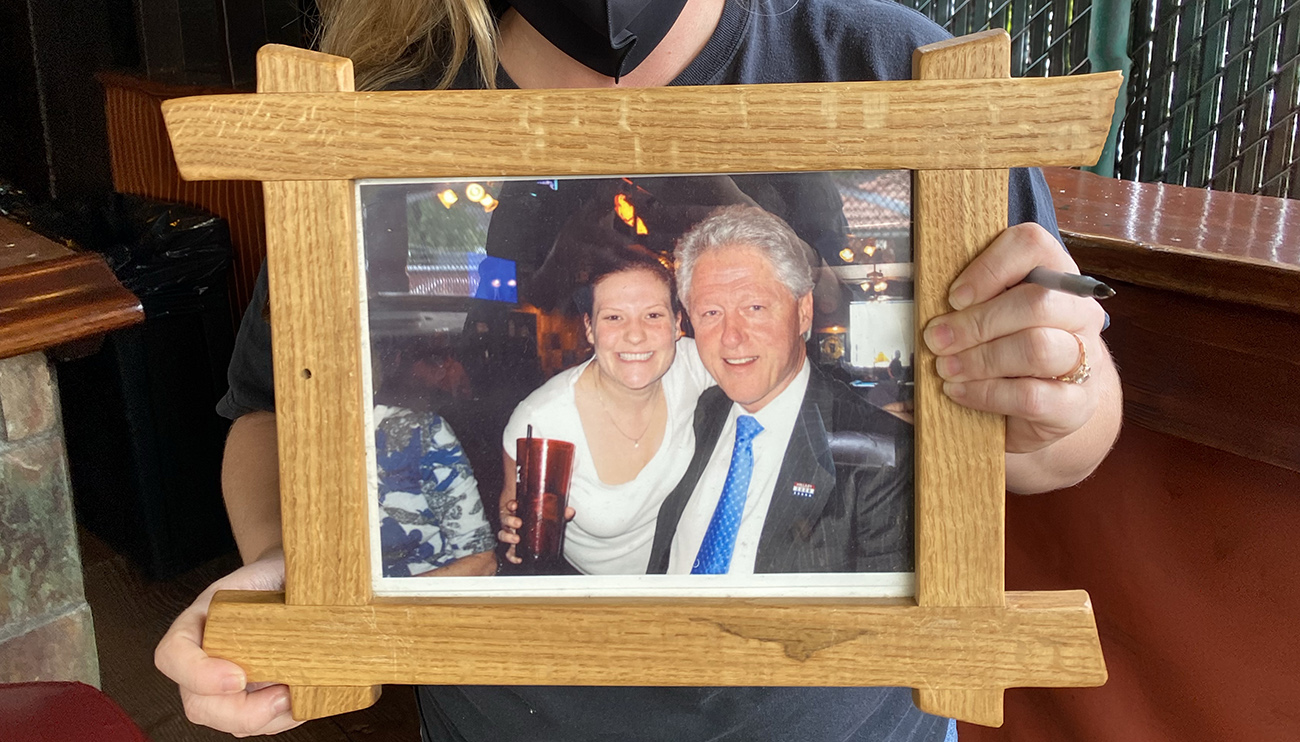 When presidents and presidential candidates visit North Carolina, you usually won’t see them at a fancy steakhouse. Instead, they tend to stick to the Southern classics: barbecue, soul food, fried chicken.

“Candidates eating the ‘people’s food’ is so much an American convention,” historian Tom Hanchett says.

If a president goes to Buffalo, they’re getting buffalo wings. Chicago? Maybe some deep dish. Candidates eat the food the constituents like as a way to relate.

I spent the past week retracing the steps of presidents throughout history using the Charlotte-Mecklenburg Library’s digital archives. Specifically I was looking for where presidents and presidential candidates ate when they visited Charlotte and surrounding cities.

As President Barack Obama has made clear countless times, he loves barbecue. He’s made his rounds in North Carolina, stopping at a handful of beloved joints, including Charlotte’s own Midwood Smokehouse in 2016. The Democratic nominee Hillary Clinton joined him, though she didn’t make it into the White House’s official photo below.

The order: Obama ordered pulled pork, brisket, and a slew of sides. Clinton ordered a chicken and ribs combo. The press cabin had pork barbecue sandwiches with coleslaw. All this according to the Charlotte Observer.

Michelle’s faux pas: After Charlotte was named host city for the DNC in 2012, first lady Michelle Obama praised Charlotte for its “great barbecue.” To which Charlotteans replied, “What great barbecue?” It’s all a bit silly; she was just trying to be nice. Charlotte’s scene has come a long way since then with notable additions of Sweet Lew’s and Noble Smoke. 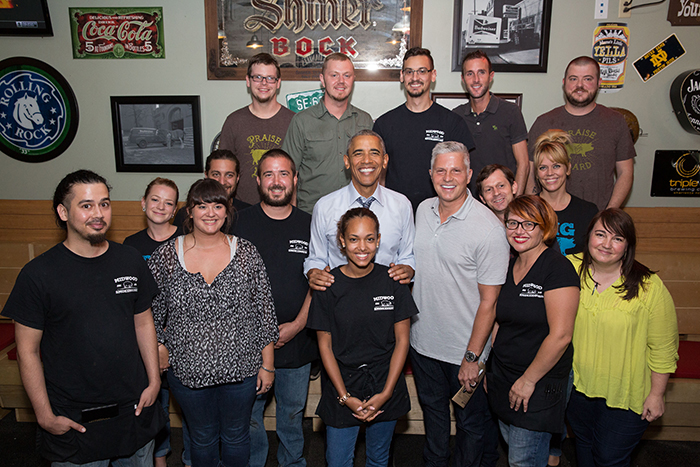 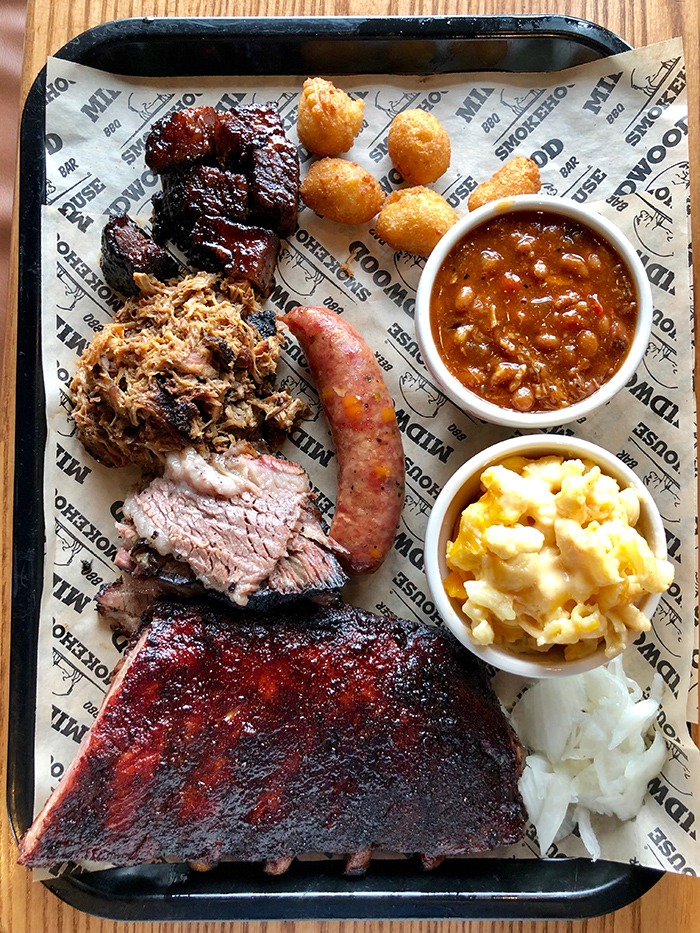 Bill Clinton stopped at Thomas Street Tavern in 2008 while campaigning for his wife, Hillary Clinton. Jamie Davis was his server that day, and she was coincidentally working when I stopped by this week.

“He was so nice to everybody,” she recalls. A few people waited outside to meet him, and he stopped to say hi to every single person. Jamie also says he left a really good tip. 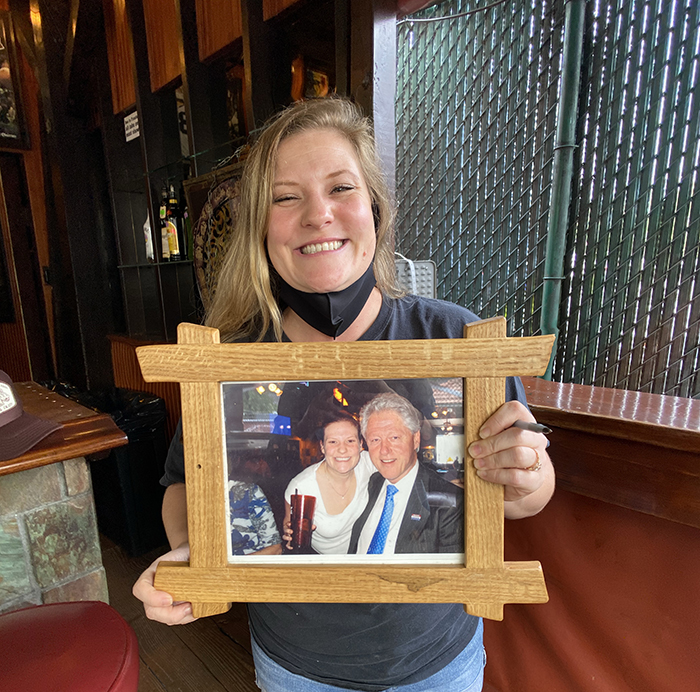 Jamie Davis, a server at Thomas Street Tavern, was President Clinton’s server in 2008.

Stamey’s in Greensboro hosted presidents George W. Bush in 2006 and Donald Trump in 2016. 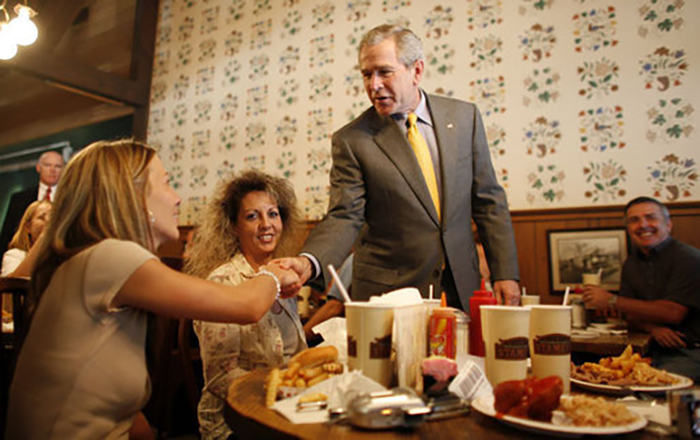 Hillary Clinton spoke to about 300 supporters in the parking lot of Troutman’s before going inside to pick up her to-go order. According to the Charlotte Observer, Clinton’s visit to Concord was the first of a Democratic presidential candidate since Jimmy Carter. Carter visited Concord in 1976 where he flipped pancakes at what was then the Cabarrus County Boys Club.

The order: Clinton got a takeout box with barbecue, hushpuppies, slaw, hot and mild sauce and three bottles of water before heading to Charlotte. “I love coming to Asheville. … There are two things that keep bringing me back here. Number one is I really like the people, and number two is 12 Bones,” Obama said during a visit to Asheville in 2013. 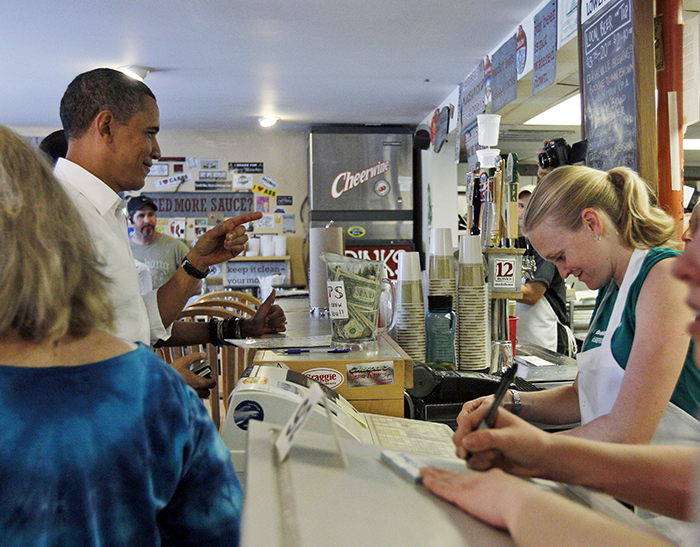 If you want Eastern-style barbecue (and who wouldn’t? It’s obviously the best), go to Wilber’s. Presidents George H.W. Bush and Bill Clinton got good advice when picking a barbecue spot in North Carolina.

I couldn’t find anything in the library’s archives about what Clinton or Bush Sr. ordered, but Charlotte food writer Kathleen Purvis said Clinton used to wear a Wilber’s hat while jogging in a 2011 Observer article. That’s how much he liked it.

The order: Lyles recommended Mert’s cornbread, but Biden ended up going with the meatloaf burger and home fries. 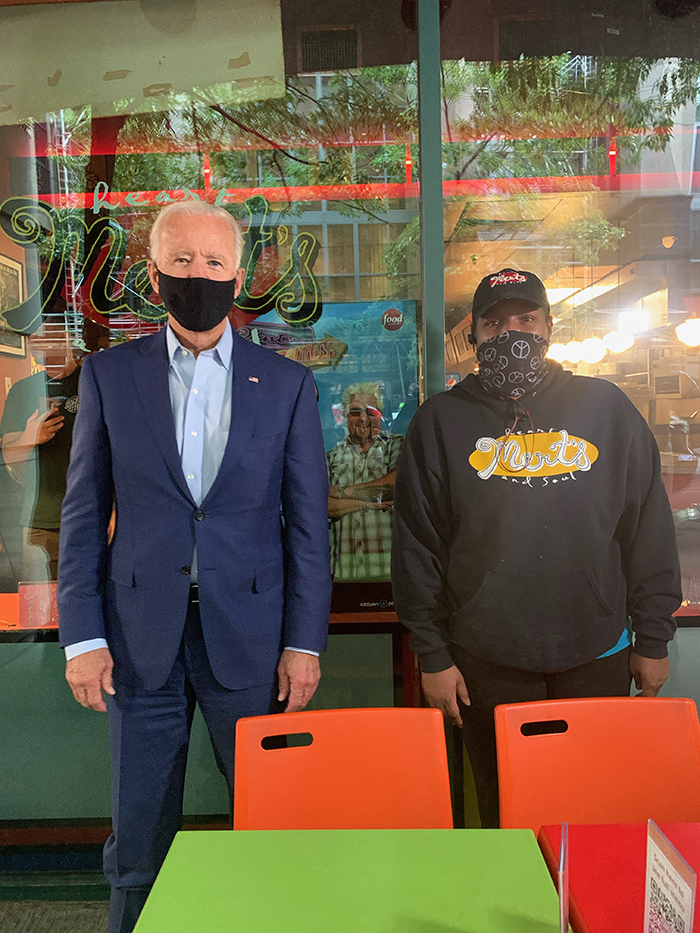 Founder Wayne Monk first served his barbecue to a president in 1983 to Ronald Reagan during the G-7 Summit in Williamsburg, Virginia. Twenty years later, Bill Clinton stopped by twice during Hillary’s run for president in 2008.

The order: I couldn’t find specifics, but there’s not much else on the menu besides a tray of barbecue, slaw, and hushpuppies. “He ate good,” Monk said of Clinton in an interview with WFAE. “He loved the peach cobbler more than anything else.”

Barbecue faux pas: Lexington native and Democratic candidate for U.S. Senate Cal Cunningham recently stirred up a barbecue controversy after tweeting a photo of himself in front of a gas (!) grill with hot dog buns (!). The caption read, “There’s nothing better than BBQ—except for winning this Senate seat, of course.” Did I mention he’s a Lexington native? Turns out that controversy was nothing after news of an affair came out days later.

There’s nothing better than BBQ—except for winning this Senate seat, of course. pic.twitter.com/oEsDXIZ5O2

Obama visits a barbecue restaurant, take three. This time in Fayetteville at Cape Fear BBQ in 2008 where the response to his visit was mixed, according to Reuters. One resident of the largely conservative area yelled, “Socialist, Socialist, Socialist — get out of here.” Later, Obama tried to shake the woman’s hand, and she refused.

B.H. and Macy Fitzgerald catered for numerous presidents in their 20 years in business, including Gerald Ford, Richard Nixon, and John F. Kennedy.

The biggest of the three occasions was in 1971, when Nixon came to Charlotte for a celebration of Billy Graham, the prominent evangelical who was born and lived in the Charlotte area until his death in 2018. The Fitzgeralds told the Observer at the time that Secret Service agents had been “swarming” all week to make sure everything was set for the big event.

The order: The menu included cross-shaped sandwiches; crab royale in creampuff shells; chicken salad; and a red, white, and blue 30-pound cake that read “We Love You Billy.”

“Mr. Graham got up there in front of all those people and told them that the Waldorf Astoria in New York could learn something from the Fitzgerald’s catering,” B.H. Fitzgerald told the paper.

Fitzgerald’s Seafood Market and Catering, located at 1235 Thomas Avenue, closed in 1972; it’s now a parking lot across from Dish. 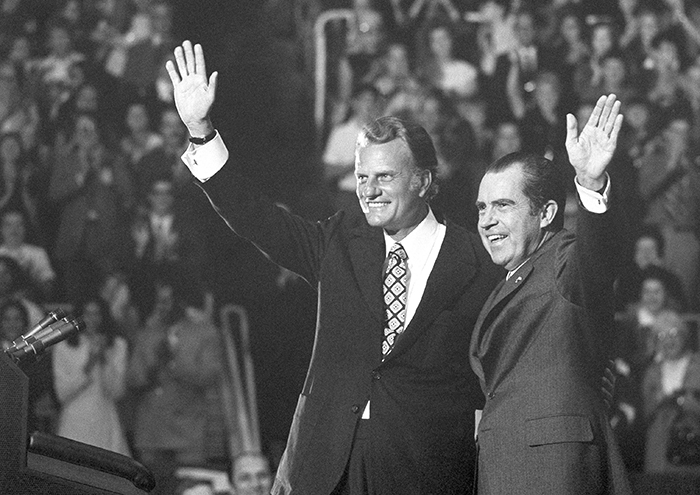 Four sitting presidents have visited Charlotte for MeckDec Day, the much-disputed celebration of America’s first (?) Declaration of Independence. The most recent presidential visit for MeckDec Day was in 1975 by Gerald Ford. Taft, Wilson, and Eisenhower also visited.

[Related Agenda guide: Why you should care about MeckDec Day]

During Dwight D. Eisenhower’s visit in 1954, he gave a brief speech at Freedom Park and was seen eating fried chicken from a box. I know what you’re thinking — no, it wasn’t Price’s Chicken Coop, which didn’t open until 1962. Neither I nor historian Tom Hanchett could figure out where the chicken was from (sorry). 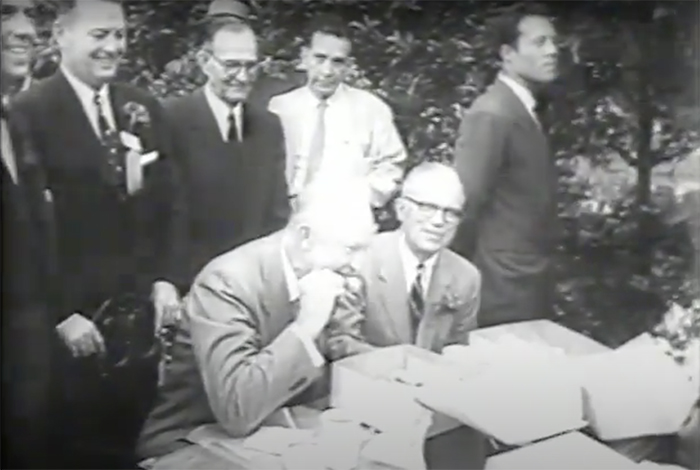 President Eisenhower chows down on fried chicken in Freedom Park. (Screenshot from this video.)

President Taft stayed at what was then called Hotel Selwyn in center city Charlotte, although it wasn’t much of a city when he was here in 1909. The hotel was demolished in 1964, but a new hotel, Marriott Center City, stands in its place. You can dine at Stoke for a Taft-ish experience. 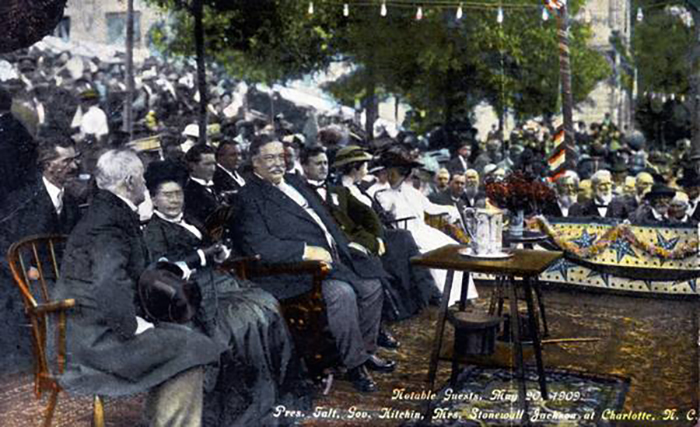 President Taft visited Charlotte for Meck Deck Day in 1909. (Photo courtesy Scott Syfert, author of The First American Declaration of Independence? The Disputed History of the Mecklenburg Declaration of May 20, 1775)

Biden is a big ice cream guy. We know this. When he was in the Triangle area on October 18, Biden and his granddaughter, Finnegan, stopped at a Cookout in Durham for milkshakes.

The order: Biden took selfies with employees before ordering one vanilla and one chocolate milkshake so that he could mix the two together himself.

Joe Biden and granddaughter, Finnegan, get milkshakes at Cookout in Durham, NC pic.twitter.com/o4B8ziU7H9

This story was last updated on January 20. 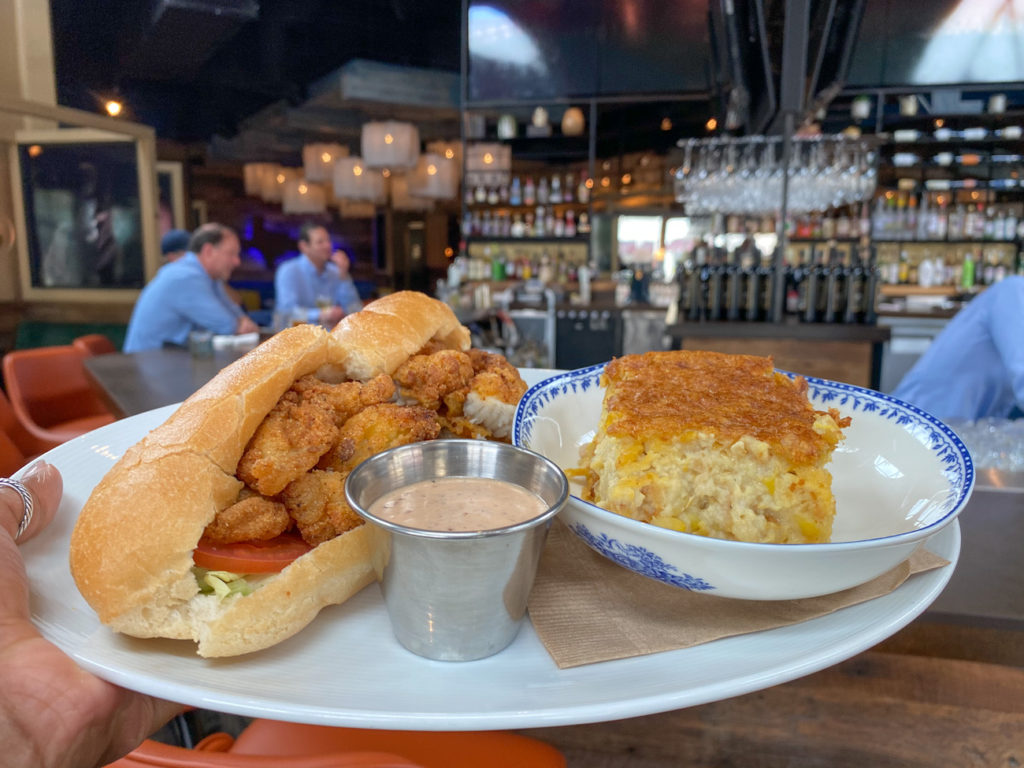