‘This is maddening’: The Brookhill project is on the brink. Again. 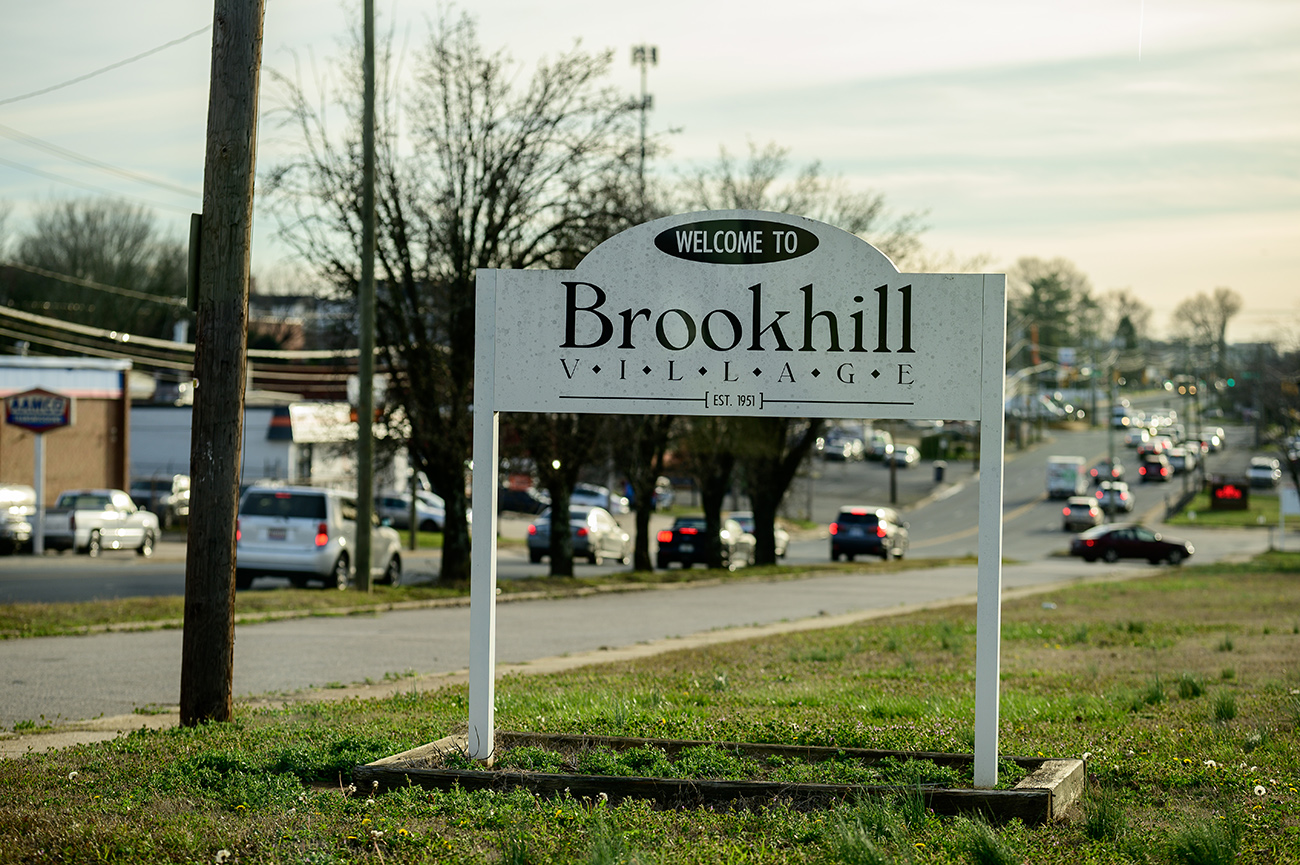 Once again, bad news arrived in the mailbox for the residents of Brookhill Village.

The developer on the South Tryon Street affordable-housing project learned last week that his proposal — years in the making — will not receive the gap funding from LISC, the firm hired by the city to distribute private dollars for affordable projects.

Tom Hendrickson of Lookout Housing Ventures posted the news Friday morning, and distributed a letter to stakeholders and residents.

“This is maddening,” pastor Ray McKinnon, one of those stakeholders, said on twitter.

Why it matters: The story of Brookhill is, in some ways, the story of Charlotte.

It’s a 36-acre property on prime real estate that’s been at the center of disputes between some of Charlotte’s wealthiest and most influential people, while the 300 or so low-income residents who live there sit and wonder if their conditions will improve.

The community is close, a place where residents hold birthday and graduation parties for each other on warm weekends. But many of the buildings are boarded up, fallen into disrepair after decades of complaints over leaky roofs and other needs. 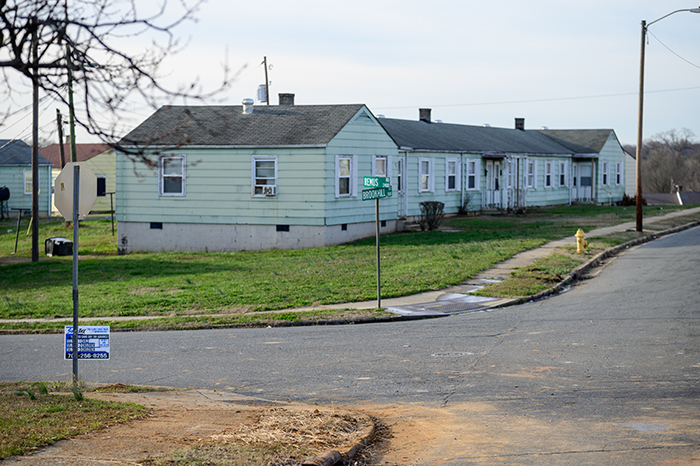 On South Tryon Street, developers are working on plans to redevelop the long-standing Brookhill neighborhood without displacing residents. (Photo by Alvin Jacobs)

Last year, Hendrickson’s group took up a challenge that no developer in the past two decades has been able to solve. He drew up plans to build new units on the property, move the current residents into them, then demolish the current units and build market-rate units there.

His proposal called for 324 residential units — 65 of which would be reserved for people making 30 percent or less of the area’s median income ($25,050 for a family of four) and 97 for people who fall in between 30 and 60 percent of the median income. Two would be at 80 percent, and 160 would go for market rate.

When Hendrickson announced the news in January, he beamed, convinced of Brookhill’s bright future. I wrote a story on the project then, and talked to residents who were cautious to be hopeful, but hopeful all the same.

Why it’s stuck: In order to start, Hendrickson and his firm need about $13 million in gap funding to cover some of the money they would lose by charging the lower-than-market-rate rents.

This is, by now, a common way of doing business in Charlotte. The city has two big pots of affordable housing gap money — the city-run Housing Trust Fund (taxpayer dollars), and the private Housing Opportunity Investment Fund (the matching fund raised in the private community by the Foundation For the Carolinas).

Each fund has about $50 million — so $100 million total — to allocate to projects they find deserving.

It’s far more money than most other affordable projects receive. Some local housing advocates, including Equitable Communities CLT, have argued that it’s too much, and say the city should pursue other options for the land.

Hendrickson counters by saying that New Brookhill is far more complicated than other affordable projects. And it also creates more units for the lowest wage-earners than most projects approved for gap funding.

The national nonprofit LISC manages the private fund and determines where that money goes.

In a letter to Hendrickson and his team last week, LISC Charlotte executive director Ralphine Caldwell turned down the $10 million request because she said the project fell short in three areas: 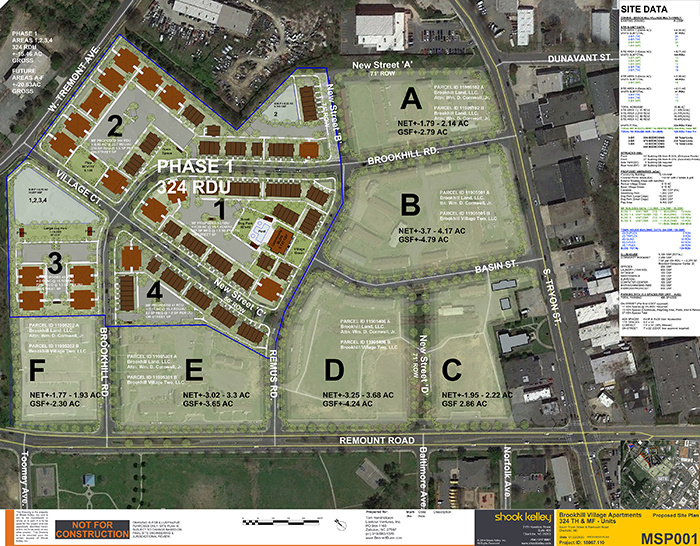 The site plan for Brookhill Village in January called for 324 units to be built first, to ensure current residents have an opportunity to stay on the property before commercial construction begins.

So why not just answer those concerns? Hendrickson says the first is no problem: He’s secured the funds and can repay the loans within the next 17 years.

The second two points — the short affordability period and the reversion of the property back to the original owner — are issues no developer will be able to solve.

Why? The land is owned by a company affiliated with the Spangler family, but current members actually can’t sell it at this time. Or do much with it at all, for that matter.

Why? In 1950, C.D. Spangler Sr. bought the land and built the current development for low-income residents. The catch, though, is that he also put a 99-year ground lease on the property for future developers.

Hendrickson’s firm now owns the ground lease. It states that he can develop on the land, but must return the property and all improvements to the Spanglers at the end of the lease.

In other words, Spangler Sr. was investing not in the future of his children or his grandchildren, but great-grandchildren and great-great grandchildren. (For generational reference, Spangler Sr.’s son was C.D. Spangler Jr., the beloved North Carolina icon and billionaire who ran the state’s university system; he died two years ago at 86.)

That doesn’t appeal to groups that invest gap money in affordable housing projects. From the perspective of LISC and the city, to invest $12.99 million on a project that will only go back to the family, who may in 2050 then tear it down and go all market-rate, isn’t the best use of funds.

Hendrickson sees it another way, of course. He and his supporters believe it’s far-fetched to believe that a developer in 2050 will seek to rezone the property, and that a future city council will agree to remove the affordable portion and openly remove hundreds of residents.

And his questions are then: Does the city want the land to just sit like this for 29 years, with more homes boarded up? And what about those 300 residents currently living there under his ground lease? 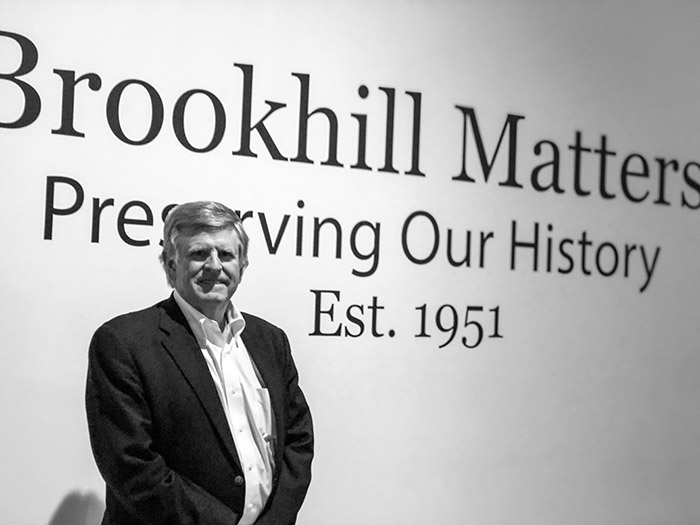 Developer Tom Hendrickson hoped to tap into Charlotte’s affordable housing funds to close a gap in the Brookhill financing.

What now: LISC could fund the project in the next round, but Hendrickson has asked them to reconsider for this round.

Since learning the news Wednesday, his thoughts have turned to finding other organizations or individuals to help with the loan, which he says he planned to pay back, with interest, in 17 years.

The purpose of the gap funding, he says, is to keep the rent down. But now that he owns the ground lease, he has to do something with the property. He’s already invested more than $300,000 into the project, he says. So the question then would be whether the development becomes all market-rate. He says he’s committed to keeping it affordable.

“The buildings will look the same,” Hendrickson said Friday. “We won’t change the design. It’s just a question of what the rent’s going to be.”

A lawsuit settled: Here’s where it gets even muddier. For decades, the land around Brookhill barely increased in value. It was largely an industrial district full of warehouses. But in the 1990s, city leaders formed a vision for what’s now known as South End.

The Lynx Blue Line opened in 2007, and development took off. The next year, local developer Greg Pappanastos approached prominent architect Terry Shook about joining in the formation of Brookhill Village Two LLC, and then purchasing the land lease on Brookhill, with the hopes of developing on it.

But in 2008, the economy crashed and construction around the city stalled. Even as it came back in the early 2010s, it hadn’t yet reached the area south of Tremont Avenue. Brookhill fell into more disrepair.

On September 23, 2016, CMPD and the federal government filed a forfeiture complaint on Brookhill. The complaint said that between 2011 and 2016 CMPD had executed at least 20 search warrants of residences there.

This naturally set up a conflict between the owners and the leasers: Three months later, on January 11, 2017, Brookhill Land (the Spangler group) sued Brookhill Village Two (the Shook and Pappanastos group), arguing, essentially, that the lease-holders were responsible for the troubles that led to the forfeiture and that they were now in violation of their agreement.

In January 2017, Shook approached Ray McKinnon, who was then the pastor at South Tryon Methodist, which serves Brookhill. McKinnon and the church had formed a separate community development corporation as a way to establish partnerships with organizations that can’t work with religious organizations.

Shook and McKinnon agreed that Shook’s group would sell Brookhill to that CDC at a bargain sale — and then the CDC would quickly sell to a suitable developer. That developer was Hendrickson.

To do anything, they had to get the lawsuit off their plate. Hendrickson took his plans for New Brookhill to the U.S. Attorney, who agreed to settle the lawsuit on the condition that Hendrickson’s group pursued the plans. Both parties signed the agreement, and then the lease transfer closed on December 31, 2019.

He was, at that point, as close as any developer had ever come to reimagining Brookhill since its construction in 1950. He had the support of the community. He had the backing of former Mayor Harvey Gantt and former Congressman Mel Watt. He had the support of current council members. But, as it turns out, he’d misjudged the assessment from the city staff and LISC.

“The only thing between where we stand now and doing the right thing with Brookhill is money,” he told me in January. “It’s an amazing thing that we’ve gotten it down to just that. 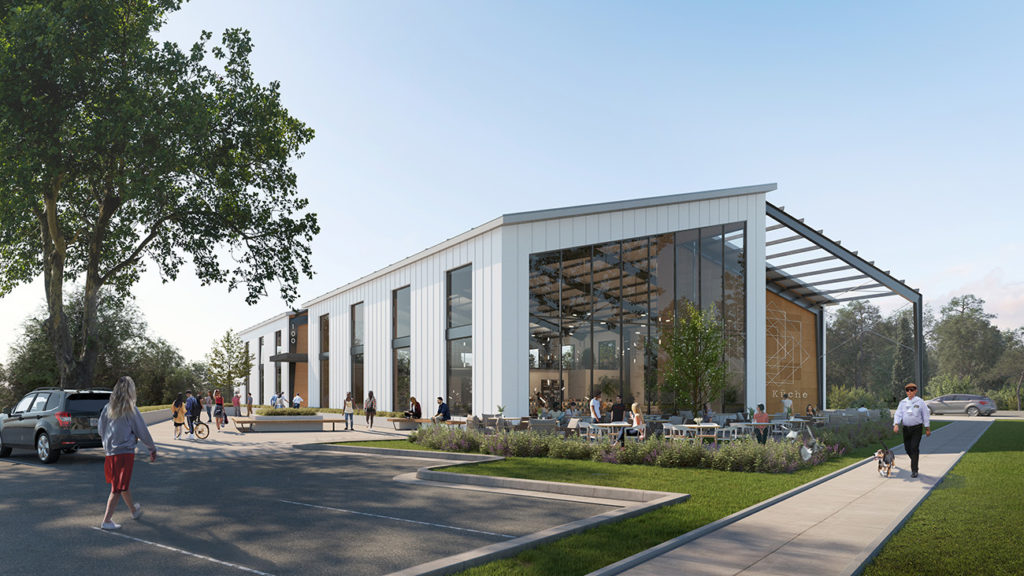