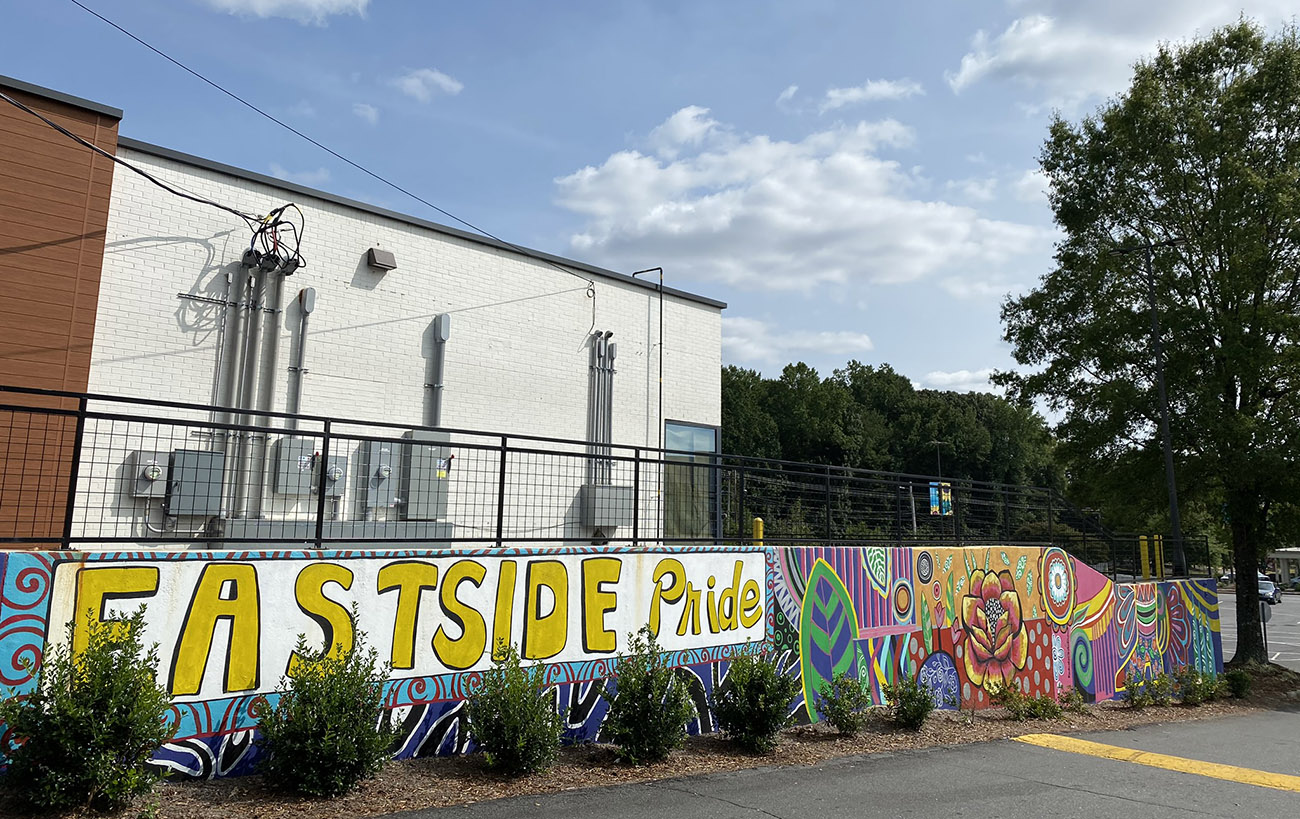 This month, the beloved Plaza Midwood Dairy Queen is reopening a few miles out Central Avenue from where it stood for seven decades. Its new home is at Eastway Crossing, a shopping center that’s quickly gaining independent local businesses, particularly those that have been priced out of fast-changing neighborhoods.

Owner Sherman Walters says pending inspections, Dairy Queen should have a grand opening October 10, nearly a year after he closed down the old location. Longtime fans of the iconic restaurant will be able to grab a soft-serve cone at the new location at 3054 Eastway Drive.

DQ is one of about six small businesses to leave either Plaza Midwood or Elizabeth in recent years and find a home in this charming white stucco strip mall that’s about a five-minute drive from the heart of Plaza Midwood. Eastway Crossing is home to an increasingly diverse mix of establishments, from mom-and-pop restaurants to a video store and dog salon.

Its evolution from a quiet strip mall to a local hotspot underscores a shift in neighborhoods where new development, apartments, chains, and newcomers are driving up the cost of rent for small operators. 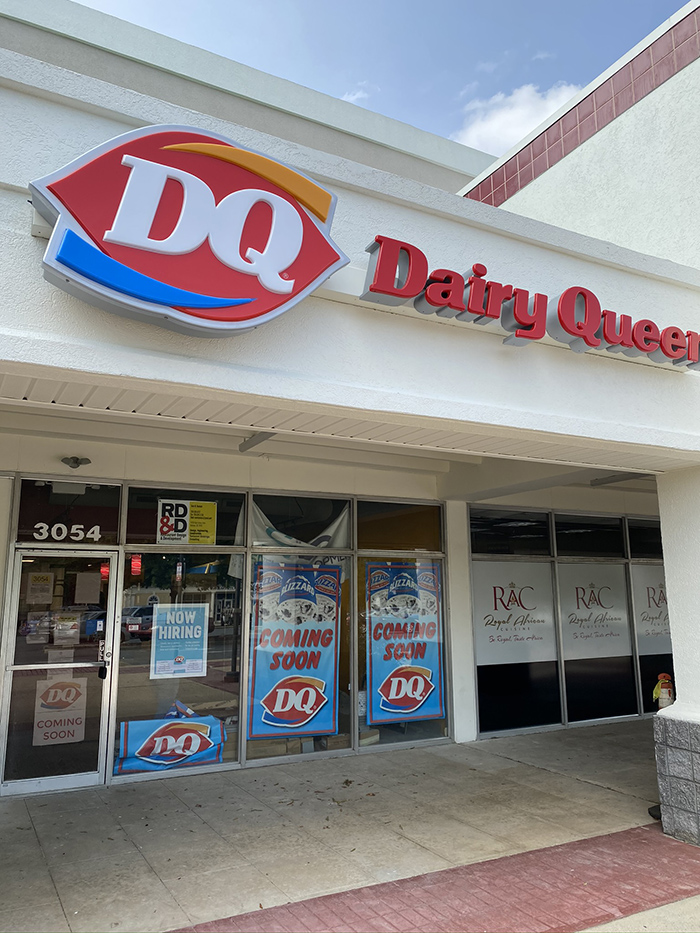 Next to the DQ spot, Royal African Cuisine has stayed busy since it opened last month.

Celebrating its grand opening this weekend is Bart’s Mart, a bar and bottle shop that sells everything from cans of craft beer to locally made honey. The bar has an outdoor patio with a mural by local artist Sharon Dowell.

The bottle shop is owner Justin Graham’s foray into retail after years in the corporate world. He and his wife, vegetarians for a decade, donate a portion of the shop’s sales to a local farm animal rescue. The grand opening Saturday from 3-6 will include live music, a raffle, and mobile book mart.

Graham considered spots elsewhere in Charlotte, but Eastway Crossing felt comfortable. Plus, he and his wife live in east Charlotte. And the hip vibe of the shopping center, as well as the support from other businesses, drew him in instantly.

For instance, Jamie Starks, owner of Tommy’s Pub a few doors down, has been stopping in to say hi and buy beer since Graham’s soft opening a few weeks ago. “He doesn’t even drink beer,” Graham says. Tommy’s, closed since the onset of the pandemic, moved to Eastway Crossing in 2017 after more than 40 years in Plaza Midwood.

[Related Agenda story: With an influx of new development, does Plaza Midwood risk losing its identity?]

“It is so tight knit,” Graham says of Eastway Crossing. “There is a lot happening within this little stretch.”

That’s part of what drew Royal African Cuisine owner Frank Appiah, too — the neighborliness and mix of tenants.

“The demography in the area is very diverse,” Appiah says.

Over the summer, Skrimp Shack, a popular Black-owned fried seafood chain that boasts a fish “sammich” as big as your face, opened a new location in a newly constructed building at Eastway Crossing. 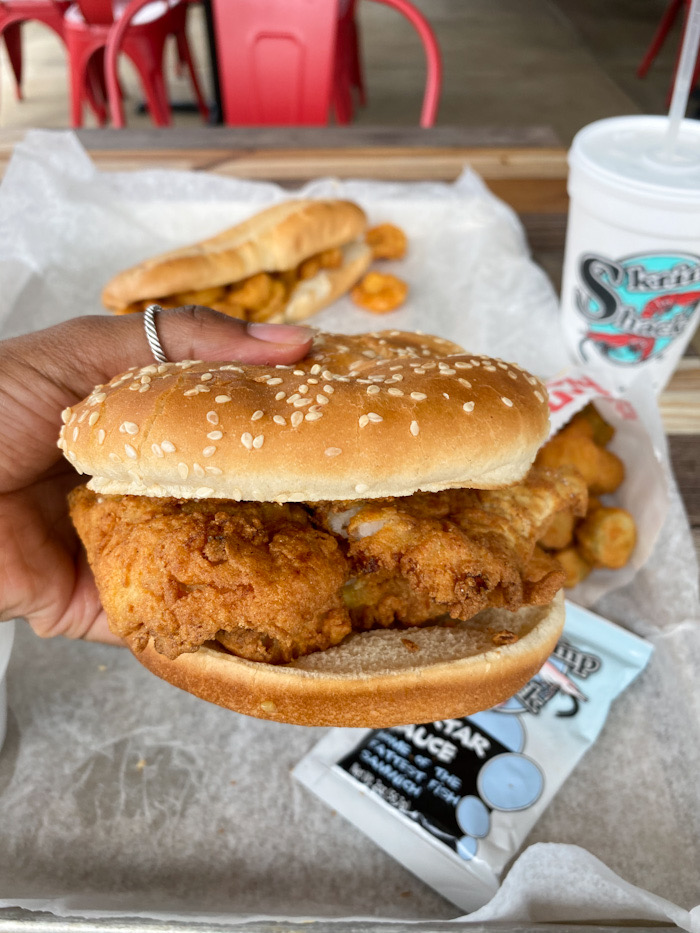 In a space next to Skrimp Shack, a chef named Rocky Jokbengboon recently signed a lease for a noodle shop. Jokbengboon, 27, is a Johnson & Wales grad and former personal chef for professional athletes. For years, he has operated a ramen shop in Orlando.

Jokbengboon describes his new restaurant Sosu, the Japanese word for sauce, as a “nontraditional Japanese restaurant” that’s an elevated version of his Orlando spot, Naroodle. Sosu will have have small plates and ramen, plus a menu of creative sake cocktails. Jokbengboon is a big fan of Japanese anime, so the inside of Sosu will reflect that with colorful, graffiti-like murals.

The sounds of Sosu will reflect Jokbengboon’s music preferences, too. He plans to curate playlists for different days, like a 90s hip-hop night.

When scouting locations, Jokbengboon looked in Plaza Midwood. Last winter, he was surprised to see the Dairy Queen had closed after so many years on Central. Then he learned about where it would reopen.

“From a business standpoint, people are tired of the rent over there. And they realize that’s not the only neighborhood that is cool and hip and brings in sales,” Jokbengboon says. 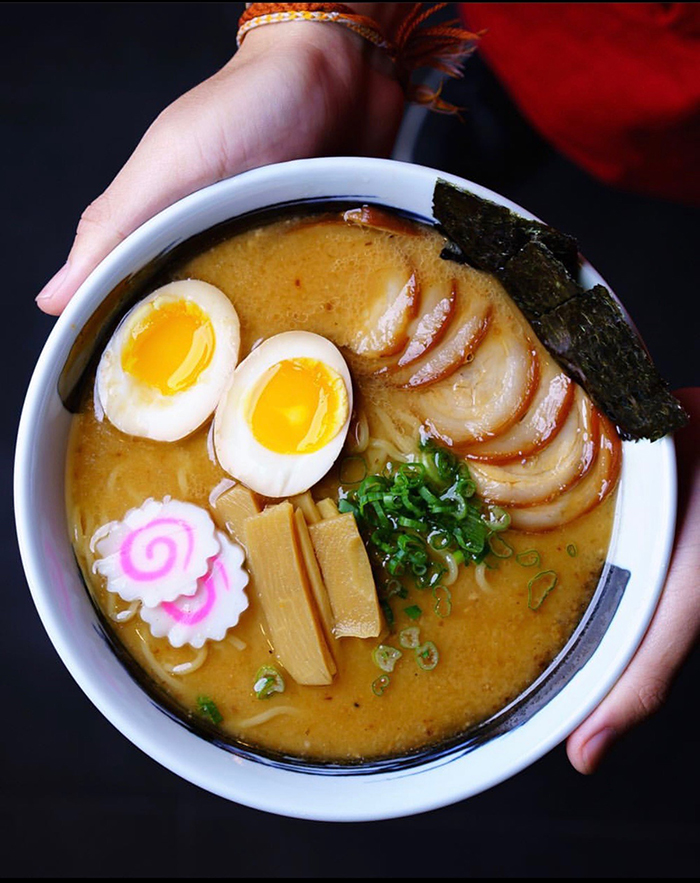 What’s moved in recently: VisArt, one of the last independent video stores in town, moved from Elizabeth to Eastway Crossing in 2015.

About two years ago, Penny Craver, the former co-owner of Dish in Plaza Midwood, opened EastSide Local Eatery, a vegetarian and vegan cafe, with a few close friends next to VisArt.

Armada Skate Shop moved to Eastway Crossing from its old spot in Plaza Midwood a few years ago, too. 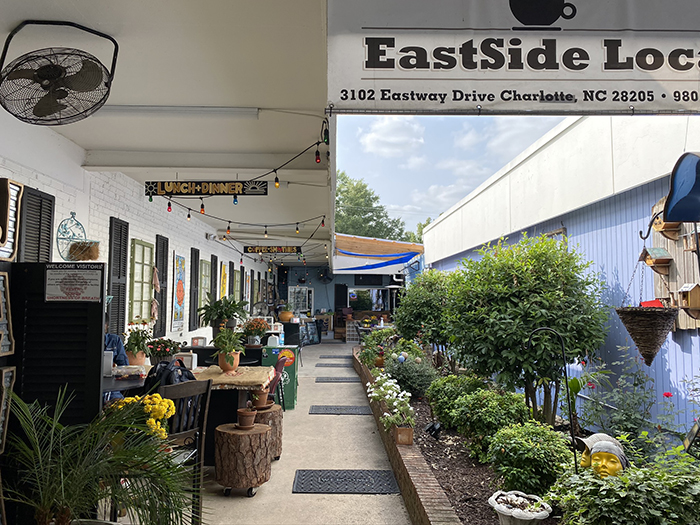 The developer’s vision: Stanford Garnett of Collett, a commercial real estate agency, represents the landlord at Eastway Crossing, John Turner. Garnett has been leasing the shopping center off and on since 2000.

The center looks much different than it did back then, though.

In the 1990s, Eastway Crossing was redeveloped by Aston Properties, the local developer that today happens to own the old Dairy Queen property in Plaza Midwood. Back then at the center, a 101,000-square-foot Walmart operated in the spot where the US Food Chef’Store is now. The shopping center had a Winn-Dixie grocery store, too. Also back then, the center had Friedman’s Jewelers, which ended up moving to Eastland, the east side mall that closed for good a decade ago.

The Winn-Dixie is now the Atlantic Farmers Market, a grocery store with a range of international foods on the shelves. And Portofino’s, which has four locations throughout Charlotte, does steady business here, too.

In 2016, the landlord began a multimillion-dollar renovation at Eastway that included a new exterior paint job, a new roof, and new parking lot lights and paving. It was part of an effort to breathe new life into Eastway Crossing. 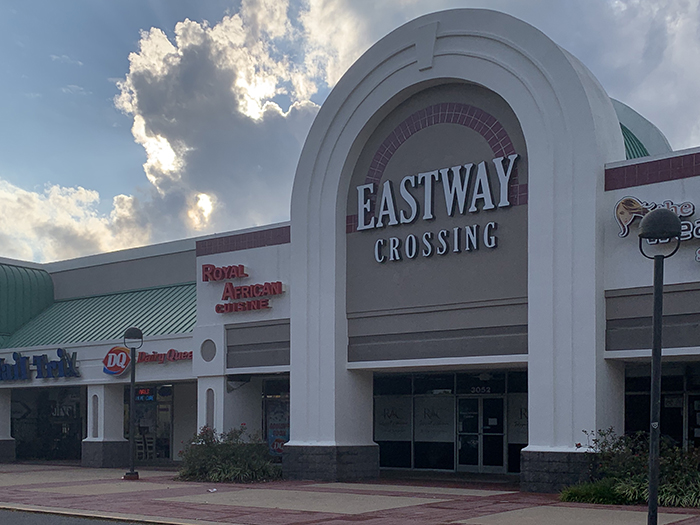 Especially in recent months, and despite the pandemic, Eastway Crossing has drawn interest from all kinds of prospective tenants, Garnett says. The center is alluring for a handful of understandable reasons.

For one, it’s less than a 10-minute drive from neighborhoods like Myers Park, Cotswold, and Elizabeth. It’s also much cheaper than other popular neighborhoods. Rents at Eastway run around $18 per square foot, Garnett says. In areas like South End or Plaza Midwood, rent can be as high as $30 per square foot.

“It’s been neat to see the evolution of it,” Garnett says. “We always wanted it to reflect the community’s desires on that corridor and in east Charlotte as a whole.”

A few other former Plaza Midwood businesses have left recently, too.

Open Door Studios held ballet, jazz, and modern dance classes in Plaza Midwood for 15 years before closing its doors as the pandemic set in. Owner Jacqueline White had already been looking for a new location since her landlords are redeveloping her old spot, and weren’t renewing her lease. She’ll open this fall in a larger space at Eastway Crossing a few spaces down from Bart’s Mart and Dairy Queen.

There’s also the Dog Salon, which had been in business for 15 years at Central Square. Owner Jessica Law just signed a lease for a new spot — near Open Door Studios, her old Plaza Midwood neighbor, at Eastway Crossing. Her new location is closer to Central, meaning more visibility.

“I immediately felt some old Plaza Midwood vibes after meeting some of the tenants and knew this would be a great home for us. Plus its super close to our old location,” Law says. 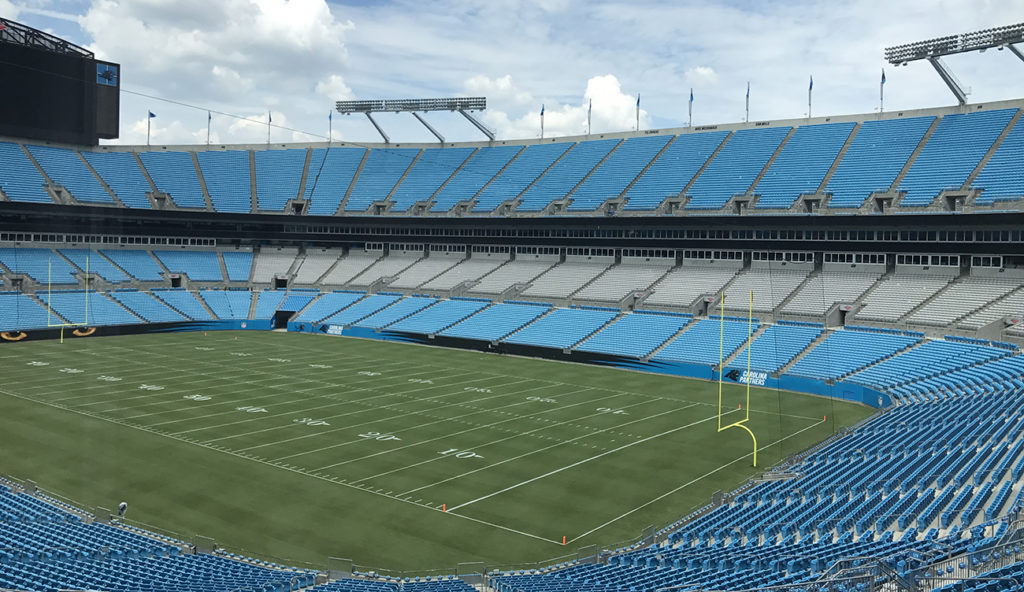 Game day, Covid-19 edition: What to expect at Panthers’ games (and other sporting events)