Charlotte beer and candy: A treat, not a trick 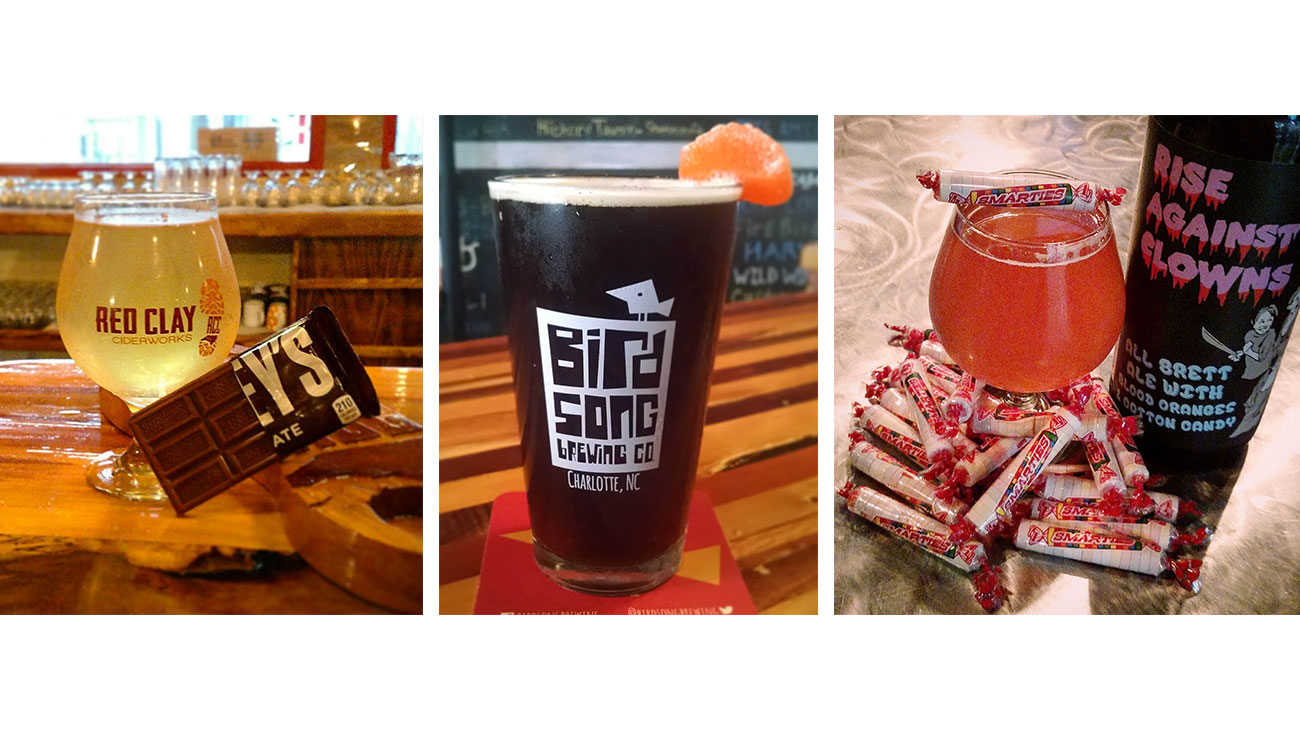 Food and beverage pairing articles are oftentimes dull pinkies-out affairs, with voluminous words and stodgy descriptors making my eyes glaze over. Thankfully, beer writing is a bit more light-hearted, so attempting to pair Charlotte-area beers with Halloween candy didn’t sound like the most offensive idea.

I popped around town to a few of Charlotte’s many breweries to see what combinations worked, occasionally joined by a friend possessing exceptional taste. My job was much harder when sampling solo, with tastebuds fatigue becoming a real issue.

Halfway through this experiment, I pondered if I’d be the first Agenda writer to attempt to expense their next dentist’s visit. Oh, the things I do for the written word in the name of beer. Safe to say now at this project’s completion, I’m laying off the sweets for a while. I knew something clicked, judging by the size of her eyes. Hershey’s had brought out a lemony acidity in the sweet cider option South End Sweet, and the dry tssk of semi-dry Queen City Common conflicted with the lingering sweet chocolate melt. But perhaps the answer was in hand?

I nervously took the sample glass of Hoppin’ Good Thyme. “Chocolate first, until it almost dissolves away, then cider,” I was instructed. After the sip, my eyes were as large as hers. We didn’t bother sampling other candies after this walk-off home run. Milk chocolate pairs well with a cider loaded with three hop varietals and a dose of thyme. Who knew?

Glasses of Hoppin’ Good Thyme are $6 apiece at the taproom, with to-growlers coming soon.

Howl-O-Ween, a canine costume contest, will be in Red Clay’s taproom on Sunday from noon to 6 p.m. Donuts and mulled cider will be available for humans, with trick-or-dog treats for the pooches. Bring non-perishable food items for the canned food drive sponsored by United Way Young Leaders, with Second Harvest Food Bank the beneficiary.

There are two contests Sunday afternoon: costume judging at 3 p.m. for pups, apple-bobbing at 4 p.m. for people, with prizes awarded for both events. The easy decision was to select the bourbon-barrelled Eyes Of The World imperial smoked porter as my base beer. The hard part was figuring out what candy choice could handle the medley of roasted malt, vanilla-tinged booziness, and subtle smokiness.

My original back-up plan of Reese’s Peanut Butter Cup married well with the porter and amplified the latter’s sweetness. Butterfinger was trotted out initially, hoping the crisp finish of Eyes could amplify the crunchiness of the sweet, but the former’s lingering saltiness was brought to the forefront instead. My science teachers would be pleased in my testing my original hypothesis regardless of the outcome; could someone let them know I was actually paying attention in class?

The weekly run club and yoga group, which meet every Thursday at 6:30, will be donning optional costumes for this week’s occurrence. It’s otherwise delicious business as usual this weekend, with music from the Bearded Buddhas entertaining Saturday’s taproom crowd from 4-7. Take something that scares the heck out of folks, add in a healthy dose of sugar and you have either Halloween night or a new beer from Unknown, Rise Against The Clowns. This collaborative effort with Florida’s 7venth Sun Brewery prominently features blood oranges and cotton candy, so my article option was obvious.

Smarties were the smart (sorry) here, edging out candied orange slices by a nose. There’s a similar slight chalky yet not unpleasant commonality between the two sides

Say “hola” to El Corazón Sangra Que Morado (The Heart The Bleeds Purple). This is the second entry in Unknown’s Day Of The Dead series, following last year’s Escorpion En Fuego. Brewed with Peruvian Purple Corn, Hibiscus, Purple Peppers, and Spices, bottles and draft of this new offering will be available at noon on Sunday, coinciding with Day Of The Dead festivities.

Unknown is no stranger to eventful parties, and this will be no exception. Day Of The Dead themed face painting and a mariachi band will entertain taproom guests. “I know you can do better than that,” Chad urged, begging me to change my mind on my intended selection. He’s right; pairing a Mounds bar with Coco Loco Porter was about as much of a “gimme” as they come, with the ingredients of cocoa and coconut common between the two sides. We ran through a few other options, but no luck.

I’m not even a Mounds fan, and my tasting partner less so, but you can’t argue with results. Kit Kat was a mentionable second, but the richness of the porter caused the crispy center to come off like toasted cardboard. Only the chocolate and coconut combo could withstand Coco Loco, and the preconceived winner was correctly crowned.

NoDa’s busy all weekend celebrating their 4th anniversary (more on this later), and Saturday is no exception. Expect an impromptu costume party that night, with the Tin Kitchen food truck on site to offer grub.

Four specialty beers will be tapped (specifically 2014’s Monstro & Captain Peanut Butter’s Chocolate Revenge, plus 2015’s Hot Pistol & Between the Berries and Me). NoDa employees will be sporting costumes themed like each of these four; I can’t wait to see what they come up with. I looked over my shoulder for the first time on this journey. OMB takes great pride in their beers only containing hops, malt, water, and yeast; would my throwing Halloween candy into the mix result in immediate expulsion from the taproom? I opted to sneak stealthy nibbles in between sips, lest I attract too much attention.

Hello, Snickers and Fat Boy Baltic Porter. I thought perhaps the sweet finish of Mecktoberfest would be helped along, but the roastiness of Fat Boy and the saltiness of the peanuts went together like Charlie Brown and Lucy, all the while elevating the sweet booziness of the beer to match succulent caramel. Surely that was a joke, I thought, but I’d seen that look before: She meant business. “Seriously, Lazy Bird and those orange slices, it just works.” Who am I to argue with an actual authority on the subject at hand? I made sure to snag a bag of those sugar-coated citrus snacks when I hit the store.

My last stop on this extended field trip was delayed slightly from the pack, but those earlier words still rang in my ears as I took that first sip. If there was a better pairing with this beer, I’ll never know, as I was too busy shaking my head in dumbfounded bemusement to discover an alternate offering. The bright finish of the brown ale and the shiny citrus, it just works indeed.

Lazy Bird pints cost $4 at the tap room, with growler refills only $10.

Welcome back, Mexicali Stout! Brewed with Central Coffee, cinnamon, cacao nibs, and serrano chile peppers, this local favorite makes its 2015 return with a special Saturday taproom event. A one-off cask of this beer, complete with a further addition of habanero peppers, will be tapped at 6 p.m.

Haunted brewery tours are free of charge, running at 7 p.m., 7:30 p.m., and 8 p.m. on Halloween. A costume contest will also be held, so get spooky while attempting to win the grand prize of a private tour and tasting for up to 6 people plus a $50 taproom gift certificate.  Second place nets a $25 gift certificate and growler fill. 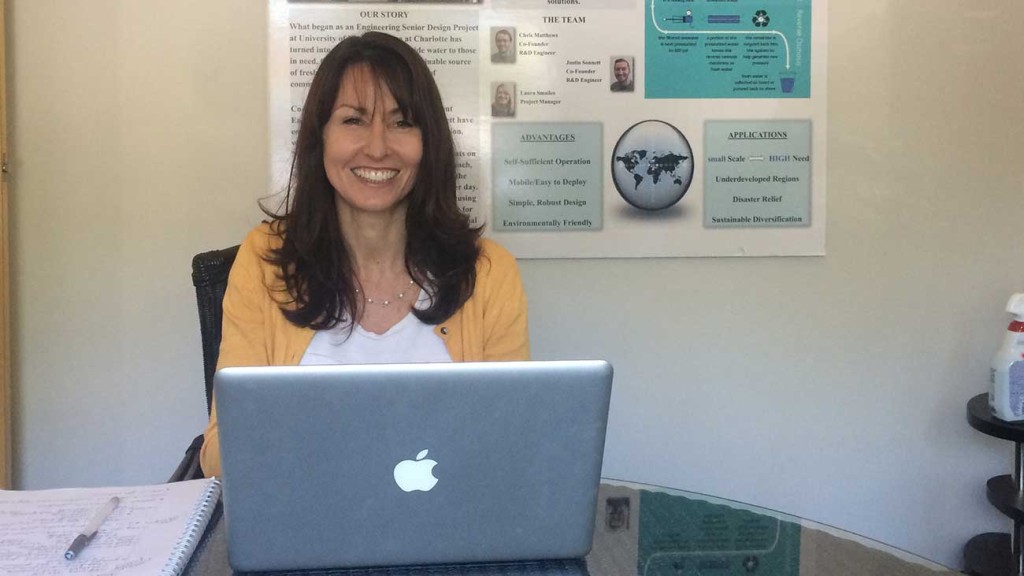