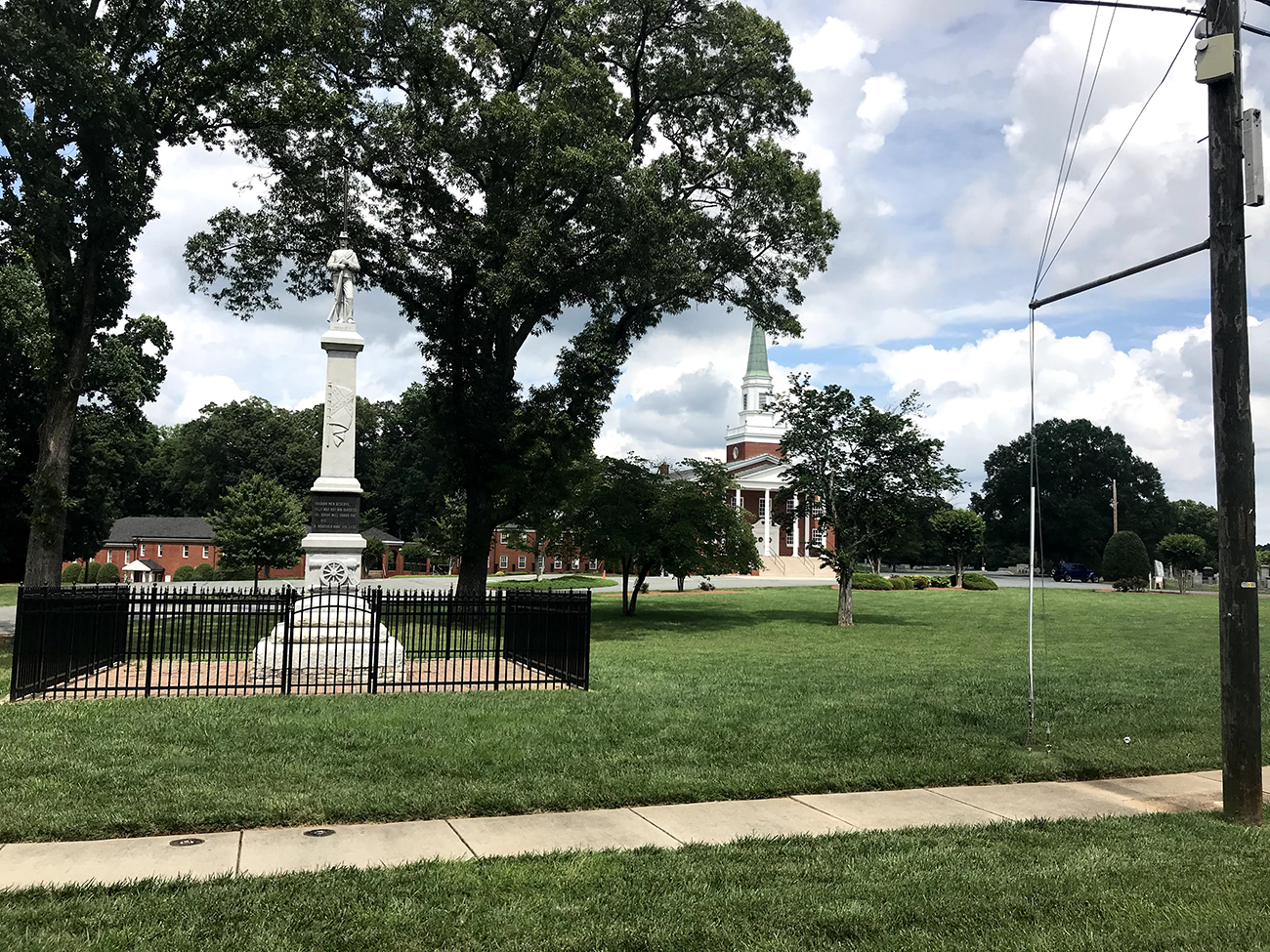 When it comes to Confederate monuments, Charlotte’s collection — an obelisk, several granite markers — is comparatively modest. Mecklenburg County’s largest monument to the Confederacy can be found, at least for now, on the lawn of Mt. Zion Methodist Church in Cornelius. It’s a soldier standing atop a pedestal, looking out onto N.C. 115.

I live in Cornelius, so I’ve been driving by that soldier for years. In 2015, I saw the blue tarp that had been draped around its pedestal to hide a painted message: “Stop honoring white supremacy.” This was just after Dylann Roof, a white supremacist fond of Confederate imagery, killed nine Black people during a Bible study in Charleston.

The monument was defaced again in 2017 following the murder of a counter-protester at a white supremacist rally in Charlottesville. When a fence went up around the statue, I stopped for a closer look and read the inscription on the pedestal:

A sign warned that the statue was under 24/7 surveillance.

Cornelius is not Charlotte. It’s a combination former mill town and high-dollar lake community, divided by Interstate 77. It’s mostly white and Republican, the least diverse of Mecklenburg’s seven municipalities. In 2016, only six percent of residents were Black, according to census estimates. Some 400 people recently marched in downtown Cornelius to protest George Floyd’s death. A couple weeks later, about 100 rallied to support the police.

Until recently, I figured that statue would be standing long after I was gone.

But this month, after Floyd’s death ignited what the Revs. Jonathan and Angela Marlowe, white co-pastors of Mt. Zion Methodist, call “a moment of reckoning across the country,” the couple released a statement. It asks the trustees of the Mt. Zion Monumental Association, which owns the statue, “to consider the harm their monument causes to our Black brothers and sisters.”

The monumental association — that’s its name — is a private trust. The church doesn’t control the statue, even though it’s on the church lawn. Some church members want to keep the soldier. Others want it gone. The co-pastors didn’t ask for removal, but that clearly seems their goal. It’s surely hard for a mostly white church to promote diversity when there’s a Confederate statue in the yard.

Unity in Community, a North Mecklenburg racial equity organization that includes a mix of longtime residents and recent transplants, has been more direct with its statue request. After the pastors released their statement, the group called for the statue’s removal as soon as possible.

When I contacted Donald Archer, the monument association’s chairman, he shared the group’s statement. Due to today’s “politically charged climate,” the association is “exploring all options available to protect and save the monument,” it says. The statement says the statue honors soldiers “who died defending their state and country” and that it’s one of the most significant pieces of history in North Mecklenburg. 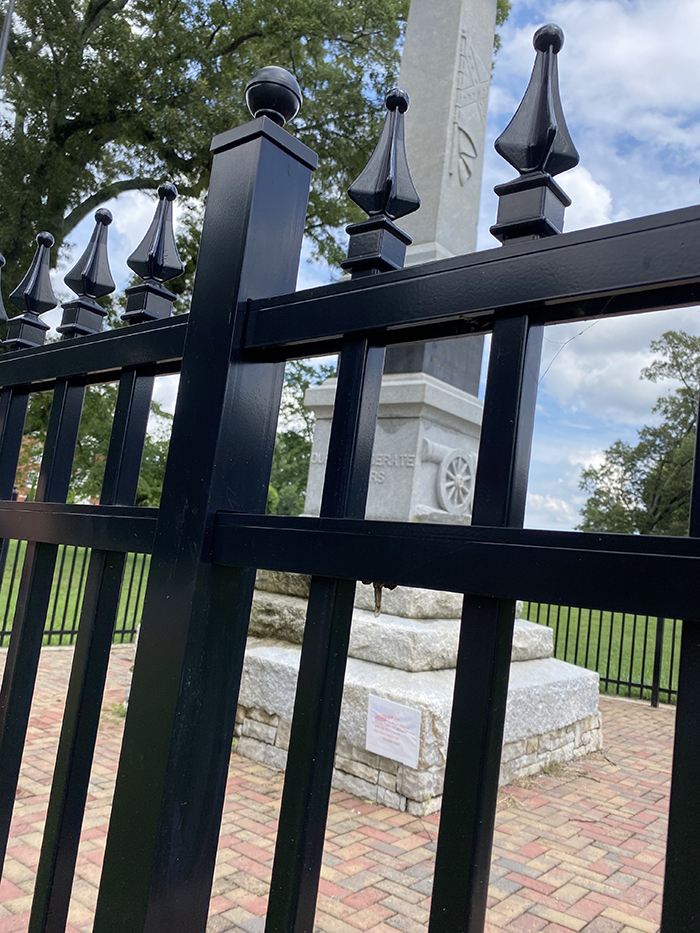 When the statue went up in 1910, the church’s expansive lawn had long been the site of annual Confederate veteran reunions. For white people, these August events were a highlight of the summer’s social calendar. They attracted thousands, including veterans who wore remnants of their gray uniforms. They’d march around the property while a band played “Dixie,” according to a church history.

By 1910, North Carolina’s Democratic White Supremacy Movement had clawed back gains Black people had made since the Civil War ended in 1865. White leaders had instituted Jim Crow laws and suppressed Black voting with threats and violence. As white supremacy triumphed, Confederate statues were popping up all over.

Soon, “every county in the state will have one,” a member of North Carolina’s United Daughters of the Confederacy chapter writes in the minutes of the group’s 1910 meeting. “It is an historical fact that more monuments have been erected to the Confederate Cause in the United States than to any other cause in the whole world. This year monuments have been erected and cornerstones laid in Salisbury, Oxford, Henderson, Franklin, Macon County and Cornelius.”

Though the war was 45 years past, Cornelius’s statue dedication drew an estimated 6,000 people, the equivalent of nearly a tenth of Mecklenburg County’s population. Armistead Burwell, a former N.C. Supreme Court judge, Davidson College graduate, and Confederate captain, addressed the crowd that day. He argued that the ideal Confederate soldier had defended slavery, but didn’t advocate it. He’d fought because he’d been taught his first duty was to his state, not his nation.

Then Burwell ended his talk with a plug for white supremacy, calling on citizens “to love home and its purity – to protect from taint the Saxon blood that courses in your veins….”

Some people argue that removing statues erases history. But what if that so-called history misleads?

Pam Jones, Unity in Community’s president, sees the statue as an effort to prop up the failed cause of the Confederacy. “The history they celebrate is really victory over Reconstruction, a victory over taking away the rights Black people had finally been granted,” she says. “I say, why don’t you put some money into rewriting and correcting the real history?” 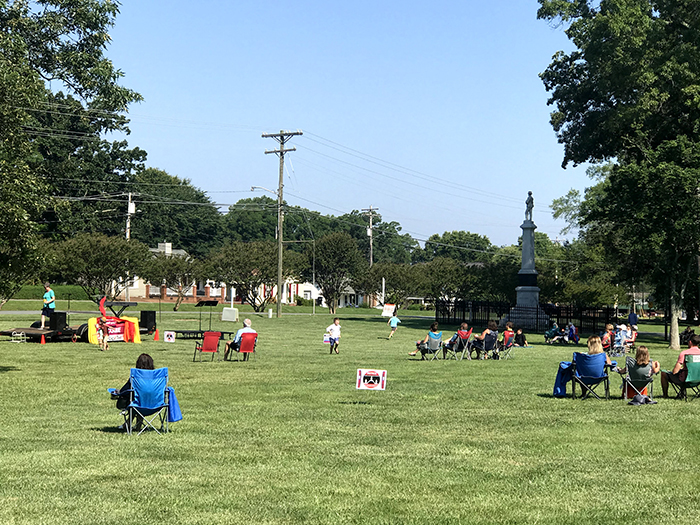 The statue is part of the landscape of Mt. Zion Methodist.

Last week, I called Woody Washam, a member of Mt. Zion Methodist and mayor of Cornelius. The monument remains important to some in the community, he told me, but he understands that it offends many others.

Either way, he believes it’s endangered as it stands. “I think it’s coming down, one way or the other,” he said. “They can either take it down or it will eventually be brought down.”

He’s hopeful, he said, that the monument association will make a positive decision.

On this past Sunday, worshippers gathered outside Mt. Zion Methodist for a socially distanced service. They sat in cars and on the church steps. They set up lawn chairs under the shade of towering oaks.

The soldier statue stood nearby, rifle in hand, as it has for 110 years. But suddenly, finally, its days seemed numbered.

Pam Kelley, a freelance journalist, is author of Money Rock: A Family’s Story of Cocaine, Race, and Ambition in the New South. 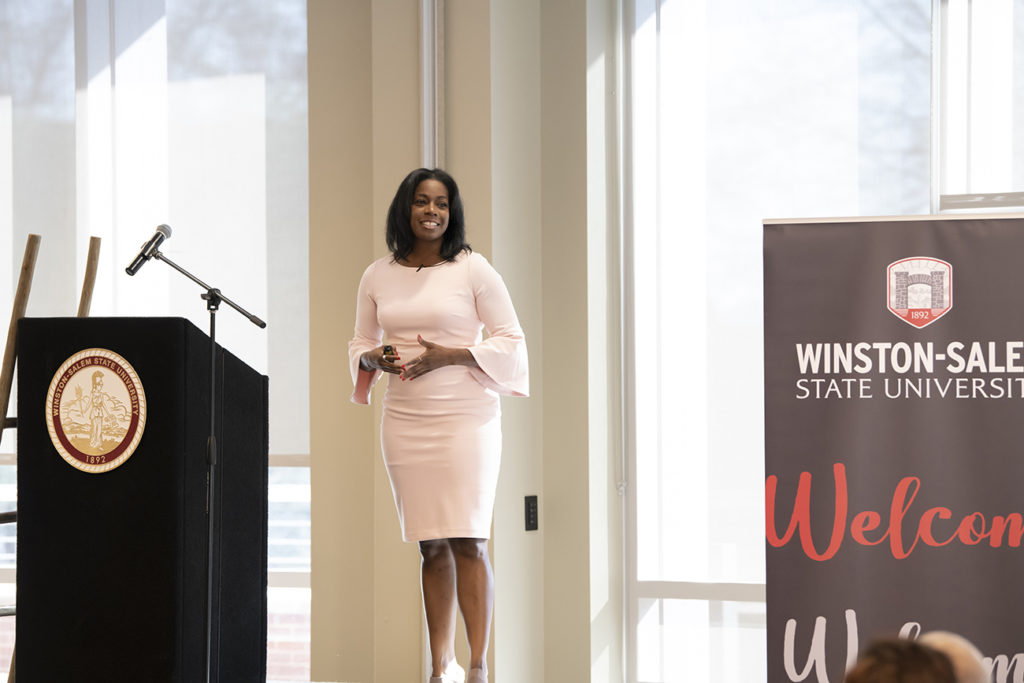