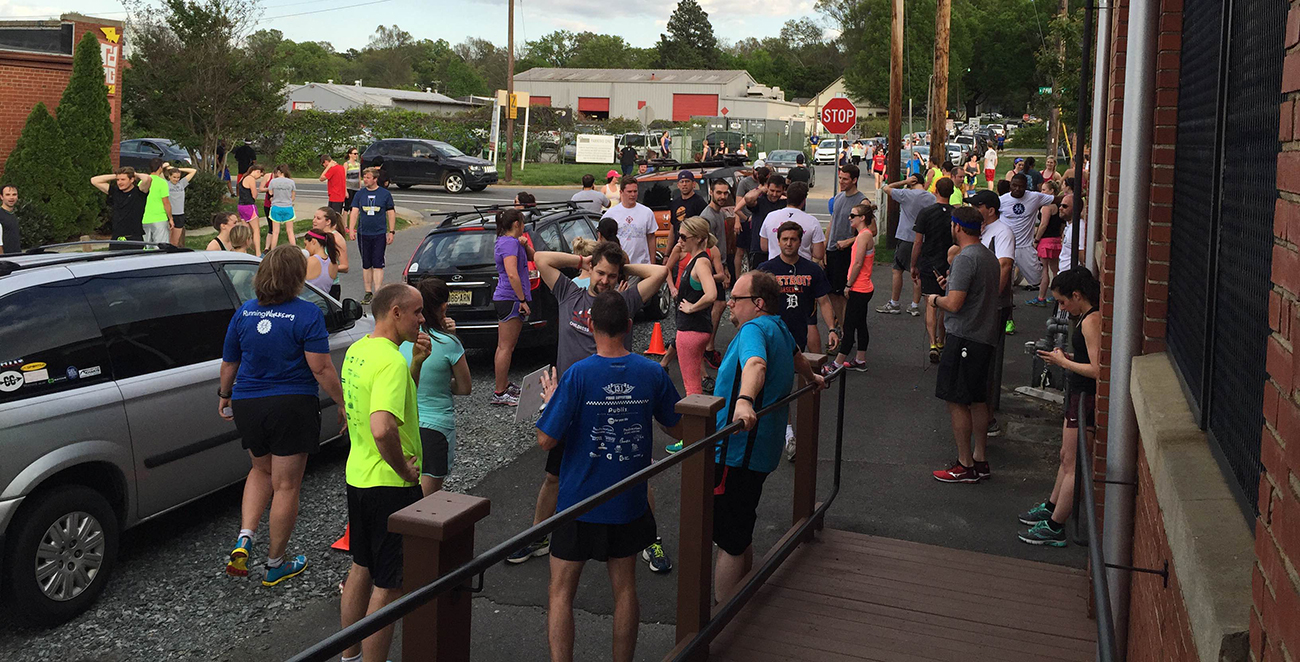 In Charlotte, those six words can be associated with Alive After 5 or Derby Days or Science on the Rocks or the NC Music Factory or one of the 4,583 beer festivals. But instead, those usually positive words are associated with an activity that is often described as painful, tiring, boring, isolated, time-consuming, and difficult.

What started with scattered groups formed on Meetup and regular meetings at the two major running stores in Charlotte has turned into a social phenomenon.

The “rules” of the run clubs are simple. Arrive before the run starts, do the run at the distance and pace that you choose, and then socialize after the run. If you have a friendly dog, bring it along as well. Another “rule” is that nobody cares about your performance, good or bad. People have goals and should be happy when they achieve them, but you won’t hear boasting or unsolicited advice given to a slower runner. You’ll hear encouragement, get offered a few high-fives, and see a lot of smiles.

For this feature, I participated in eight straight days of run clubs, starting and finishing on Wednesday night at NoDa Brewing Co., which is considered to be the trigger of the spawn of run clubs in Charlotte.

There were intricacies at each of the seven locations, but there were two constants: I only had positive experiences with other runners and participants were genuinely interested in getting to know me and the others running.

The rain ceased shortly before the run started and the five-mile route through the streets of NoDa was very pleasant. After the run, Papa Libretto’s food truck was in its usual Wednesday night spot by NoDa’s loading dock. NoDa’s delicious signature beers were flowing, along with Mutha Shuck Yo Mouth, a collaboration brew NoDa did with Front Street Brewery in Wilmington. Triple C’s courses follow the Light Rail Trail and are the easiest run club courses to navigate. The four-mile course from Triple C to the old Morehead Street trolley stop and back was the most popular course that night in the light rain. After the run, the Bleu Barn Bistro food truck was outside, and inside, the runners were joined by that evening’s yoga class with the Yoga Dude and a group of people crocheting. The crochet group was very nice and they were making some very interesting pieces. My evening concluded with a snifter filled with delicious Baby Maker Double IPA. Alas, no babies were made that night, at least not by me. Friday – Peculiar Rabbit
Every Friday at 7 pm
2.5 or 4 mile routes

Proved to be the most difficult day to find a run club. Fortunately for those who wish to run with others on a Friday night, The (underground) Wabbit Run at the Peculiar Rabbit exists. This small, close-knit group has been gathering every other Friday for about two years and was excited to have a couple newcomers. The run starts and finishes at the restaurant, with scenic 2.5 and four-mile courses through the Chantilly and Plaza-Midwood neighborhoods. After the run, the group has a couple tables reserved in a small second floor room with a pool table that I had never seen before. It’s a good spot for the runners to socialize and it was nice for the patrons at a place where the Friday night attire is pretty far from sweaty running clothes.

The most challenging run during this project came on Saturday morning. My alarm for the 8 a.m. 10-mile run at the Smelly Cat Coffeehouse came rather early. In addition to the 10-mile route, this run club offers a three-mile run at 9 a.m. affectionately referred to as the “hangover run.” The 10-mile run involved different parts of the current and former Thunder Road Marathon routes in NoDa, Plaza-Midwood, Dilworth, and Uptown. The runners in this group were obviously more on the serious side, but were no less friendly and inviting. The cherry on top of this run club is brunch a block away at Jack Beagle’s. The tastiest and most refreshing post-run beverages are on Sunday at the Lenny Boy Brewing Co. run club. The three-mile route for this club is very similar to the Triple C four-mile route. At the end, you get to hang out at the eclectic Lenny Boy tap room and drink delicious kombucha (or beer, but the kombucha is delicious). Drinking a couple pints of the all-natural, non-alcohol, super-refreshing kombucha made me feel like Popeye after sucking down a can of spinach. People who like coffee swear by the coffee stout, but I have sampled some of the others and definitely recommend the Pineapple Sunrise or the Beet Elite (freshly picked from Schrute Farms). After a rather full weekend, five straight days of running, and rain clouds that would make the producers of “Seven” jealous, I was definitely having a case of the Mondays and did NOT feel like doing another run club. That evening, Heist Brewery was hosting its usual Monday run club with vendors from Run For Your Life, two different massage companies, and a hummus company. Because of off-and-on downpours, the 6:30 pm start time was pushed back a bit, which worked out perfectly. Drizzles at the start of the run turned to sunshine by the time the bulk of the three-mile group was finishing the course. After the five-mile group got in, the patio was full of runners enjoying in-house pints and Heist’s delicious food, including an outstanding take on the traditional grilled cheese and tomato soup meal. The soup was poured into small, individual cups, with the buttery and gooey grilled cheese sliced up and laid over each cup. Such a simple dish transformed into a delicacy. With the menu at Heist, I expected nothing less.

Tuesday was probably the most social of the runs during my research week. This run club held weekly at Brazwell’s is actually part of a larger, national syndicate called Running for Brews. Alicia, the club’s coordinator, does a great job getting people to mingle and meet somebody new. She had everybody put on a name tag and get into a stretching circle before the run.

The course has two primary routes (three and five miles) that incorporate the portion of the Little Sugar Creek Greenway behind the Park Road Shopping Center and Freedom Park. I did the five-mile course and it was the most relaxing course I ran all week. After the run, everybody stuck around on the Braswell’s patio. Alicia had raffle prizes and strangers became friends. Overall, it’s an excellent run club.

Finally, my research for this feature went full-circle with another Wednesday run at NoDa Brewing Co. The crowd at NoDa that night was the largest I have ever seen at a run club and Laura, the run club coordinator at NoDa, said it might be the biggest group she’s ever seen. The brewery that started the run club craze showed that it’s still on top. Doing staggered start times with the five milers going first, followed by breaking up the three milers into two groups, then sending out the one milers would do a lot to alleviate the crowd issues on the streets and sidewalks along the course. If you’re looking to get in shape without being judged on how fast or slow you are while with plenty of socializing afterward, definitely check out any of the runs I experienced in an eight-day span.