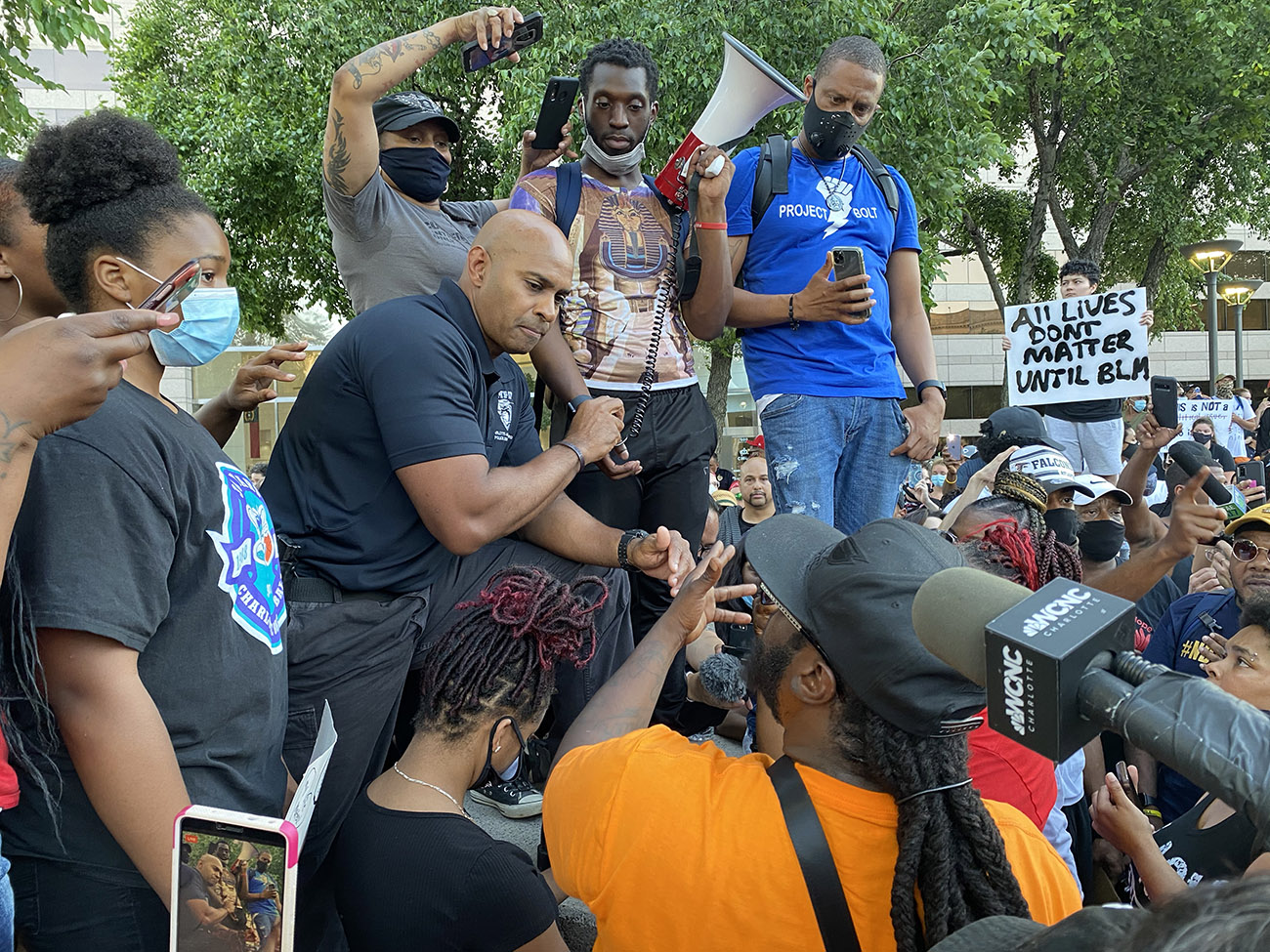 Tear gas, dispersal orders, and scenes that make the city almost unrecognizable have become Charlotte’s nighttime routine over the past six days, as protesters march and chant in memory of George Floyd and other Black Americans killed by police.

Although protests have started off peacefully, they usually lead to the widespread use of chemical agents and flashbangs to disperse crowds.

Wednesday’s protests started with an odd and at times awkward community event meant to give Charlotte residents an opportunity to address city leaders.

Mayor Vi Lyles announced a “front porch” conversation outside the Government Center at 6 p.m. in the wake of this viral video captured by Queen City Nerve showing protesters trapped on 4th Street being tear gassed by police on both sides.

The conversation, doomed from the start thanks to a not-loud-enough megaphone, resulted in more yelling from the crowd than actual conversation or answers from public officials.

About 35 minutes into the chat, the crowd chanted “walk with us” at Mayor Vi Lyles, at which point she abruptly began walking, starting an impromptu march around the block and back to the Government Center. 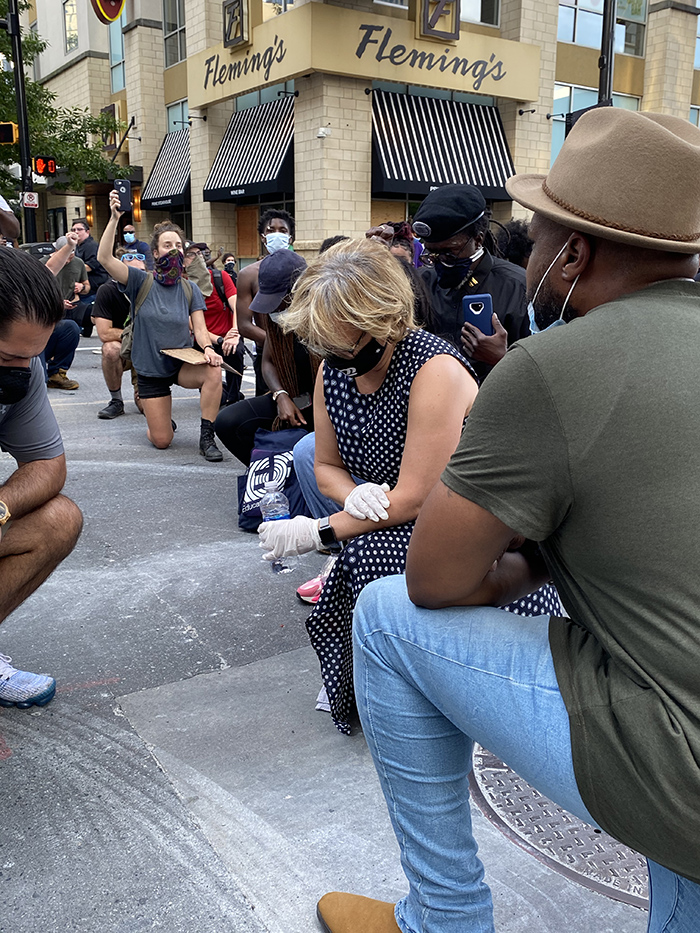 During the walk protestors kneeled for nine minutes in memory of George Floyd who was held down with a knee to his neck for almost the same amount of time.

While he and other protestors took a knee, Councilman Tariq Bokhari who defended CMPD actions in the Tuesday incident, was noticeably emotional, prompting a prayer circle led by demonstrators around him.

The brisk walk ended about 30 minutes later and the conversation started up again, kind of, the speaker system still not loud enough and the answers about CMPD’s use of pepper spray still not firm enough for the crowd.

After multiple “where’s the chief?” chants requesting his presence, CMPD Chief Kerr Putney came out to address the incident.

He was repeatedly asked why CMPD uses chemical weapons and to give assurances protestors wouldn’t be pepper sprayed again.

“Absolutely not, if there is no violence. Was there violence last night? Yes,” Putney said.

The crowd, filled with protesters who dealt with pepper spray and flash bangs the night before, disagreed.

External review: Charlotte leaders and CMPD have asked the State Bureau of Investigation to conduct an independent review of the incident on 4th Street.

CMPD said in a release that “violent protesters bent on turning a lawful demonstration into a riot” instigated the incident. Over the course of the night, officers recovered three guns, and had multiple objects thrown at them. The release said there was no evidence of “intentional abuse” by the officers.

“It is regrettable, and something we take seriously,” Putney said in a written statement. “We have an enormous responsibility to ensure all of our operations are carried out with precision.”

Dispersal order: The call to report to 4th Street came in around 9:30 p.m. on Tuesday. CMPD says officers issued an order to disperse. Protesters, however, say they heard no such warning.

The people who were there, including Tyanna Harris, say the night was mostly peaceful. The few protesters who got out of line were quickly pushed out by other peaceful demonstrators.

“There was one man who threw something, it broke a random car window. We quickly removed him from our group. ‘You’re not going to mess this up for everybody else,'” she said. 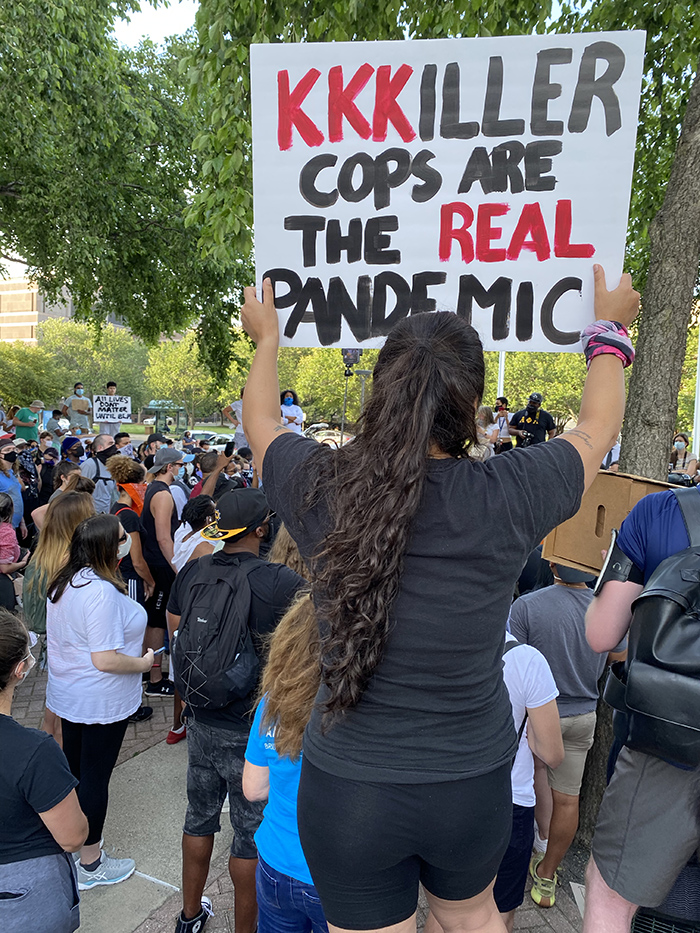 A WSOC chopper also caught footage of the incident. It shows the crowd drawing close as clouds of chemicals move toward them.

Body camera footage: Putney said late Wednesday afternoon that more camera angles exist. Under a North Carolina law that went into effect on October 1, 2016, the week after Charlotte’s last uprising in the wake of the Keith Scott shooting, only a judge can release body camera footage. Putney said he’s requesting the release of the 4th Street footage immediately.

“I’ve seen the (Queen City Nerve) video obviously and that video is disturbing no two ways about it,” Putney said. “There are a lot of other angles and perspectives.”

Chemical agents: The demonstrators’ most consistent demand is that CMPD stop using chemical agents such as tear gas.

Congresswoman Alma Adams jumped in on this Wednesday, saying that CMPD “should immediately and permanently end the use of tear gas. Weapons that are illegal in war should never be used on American soil, especially against our own people.”

The mayor woke up Tuesday morning to a tweet from her daughter, Aisha Alexander, posting a picture of the video. It read, “MOM … WTF?!!?! You can’t be the woman that raised me and think this is okay.”

On Wednesday afternoon, after city council held an emergency three-hour closed session, Lyles emerged and spoke about the incident.

She then called for the front-porch session, in which council members would answer questions from anyone who wanted to walk up.

Officers assaulted: CMPD reports at least 53 officers have been assaulted during the first five nights of protests. Other stats from Tuesday night include: 16 arrests, at least 18 incidents of protesters throwing objects at officers, nine dispersal orders communicated, and three guns recovered.

The 16 arrests brought the five-day total to 113, according to CMPD.

Why no curfew: Lyles is philosophically opposed to curfews. “As mayor of this city I don’t believe that we should have a curfew,” Lyles said Wednesday. “I believe deeply that people ought to be able to protest within the law. I believe a curfew limits that right.”

Each night, the city’s police department issues dispersal warnings around 9 p.m. Technically, the department says they’re provoked by illegal activity. But for the most part they’ve all occurred around the same time.

What others are saying: New Panthers coach Matt Rhule started his press conference yesterday with comments about the George Floyd protests, generally, without getting specific about Charlotte: “I know when my kids are in college, they’ll look back at this time and this place and they’ll want to know where their father stood and where their mother stood. Our grandkids will want to know where we stood in this time and that’s a tremendous thing to think about.”

Michael Graff and Katie Peralta contributed to this report. 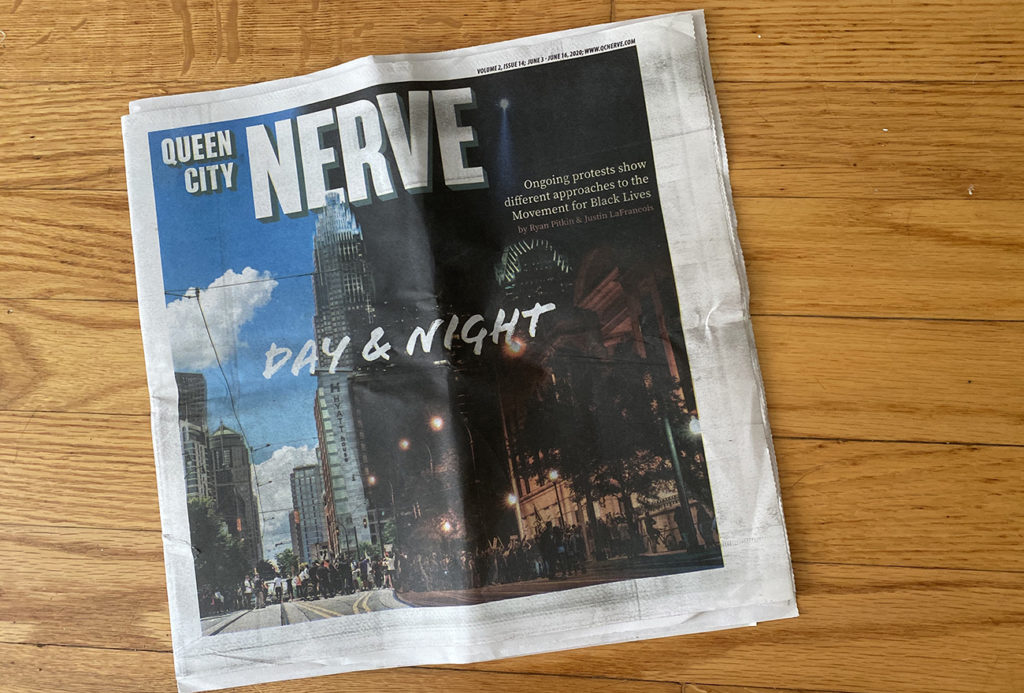