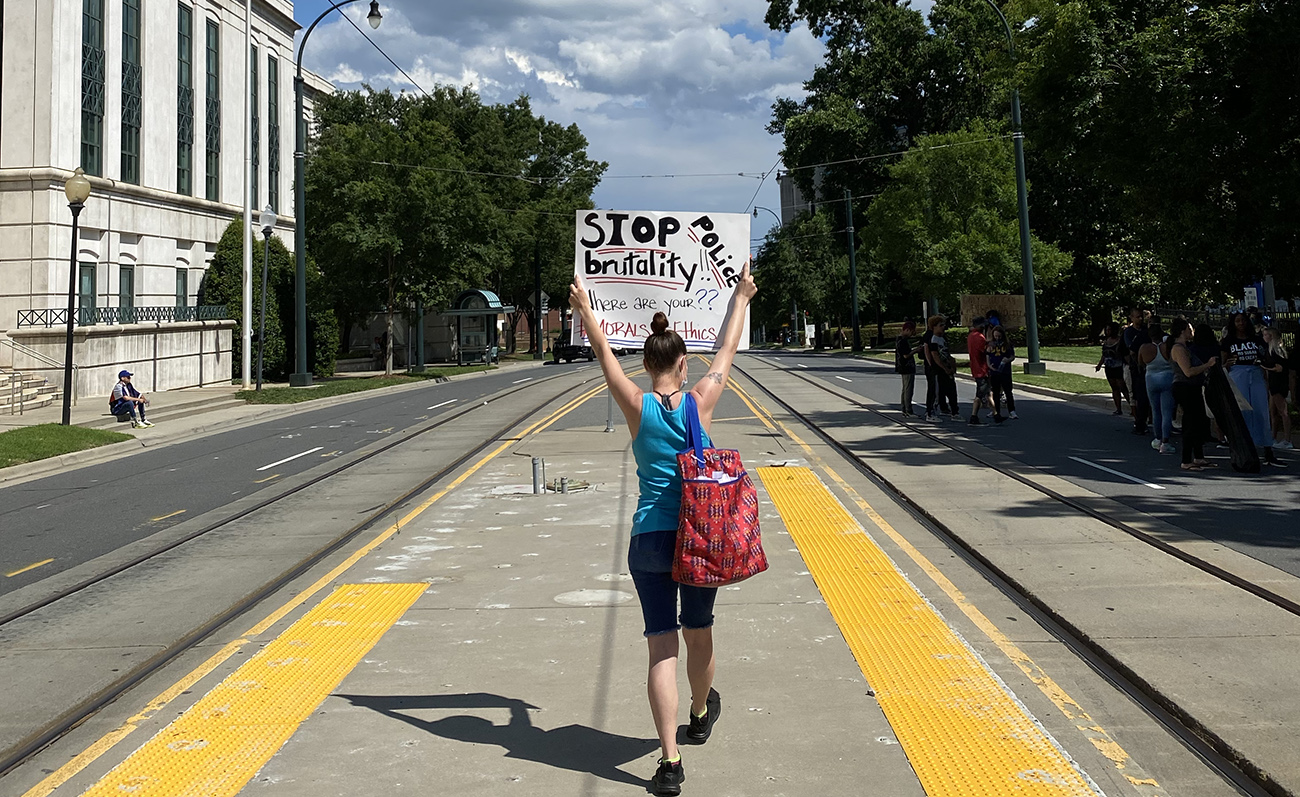 The familiar sound of chanting made its way through Charlotte’s streets this weekend — out Beatties Ford Road, through the tunnels of skyscrapers in Uptown, and across the sweeping green of First Ward Park: No Justice, No Peace.

Protesters were, of course, chanting in response to the police killing of George Floyd in Minnesota and the painful, inescapable video of a police officer there kneeling on the Black man’s neck while he begged for air, for life.

For three days and nights, the demonstrations in Charlotte had similar structures: In the light of day they were raw but peaceful, and at night they devolved into arrests, injuries, and shattered glass.

On Sunday around dusk, protestors took a knee for nine minutes at the corner of Trade and College — the length of time Floyd was under the officer’s knee. It was a moving moment, but it was followed just a few hours later by fireworks being set off in the direction of patrons of Ink N Ivy and other locations.

More than 60 people were arrested over the weekend, according to the most recent count from CMPD.

Protests took place across the region. Demonstrators set fire to the market house in downtown Fayetteville, where slaves were once auctioned off. Police used tear gas on a clear afternoon in Columbia, South Carolina, where the Confederate flag flew over the statehouse as recently as 2015. Someone broke a window at the International Civil Rights Museum in Greensboro, in the location of the hollowed Woolworth’s lunch counter where the Greensboro Four started the sit-in movement in 1960, and people there spent Sunday wondering who would do that.

They marched in Rock Hill, Charleston, and Raleigh, each demonstration ranging in size and intensity, but all had similar intentions: To oppose police brutality and racial inequality. On Friday, May 29, protesters gathered on Beatties Ford Road outside of CMPD’s Metro Division.

A rocky start: In Charlotte, Friday night’s protests started on Beatties Ford Road, in a historically Black part of town in west Charlotte. It was a curious location to many locals, who questioned whether outsiders organized it, knowing that the neighborhoods around Beatties Ford are filled with Black families who’ve lived there for generations and wouldn’t invite the crowds on their own.

Regardless, the protest occurred, and grew intense after night fell. Protestors stole an officer’s bike and threw bricks through windows of the CMPD Metro Station.

The following afternoon, city council members held an emergency meeting, then a spur-of-the-moment press briefing during which Mayor Vi Lyles said the city had declared a state of emergency.

“What we’re going to be is deliberate listeners. We’re going to try very hard to address the needs we are seeing.”

Tensions rise: What started out as peaceful protest Saturday escalated as the night progressed. Within a few hours, protesters marched up the Interstate 277 ramp and blocked traffic. They formed a human chain around the transit center, temporarily causing it to close.

During the night, windows broke at various Uptown businesses, including Sophia’s Lounge, 5Church, and King’s Kitchen. The demonstrators spent most of the night in front of CMPD headquarters on Trade Street.

Multiple times, CMPD deployed tear gas and flash bombs in an attempt to disperse the crowds, and in response to protesters threw things at officers. In a press release Sunday, CMPD said that up until 5 a.m., a group of “50 to 75 rioters threw rocks, explosives and other items at groups of officers, at police property, and into community businesses.” Six were arrested on firearms charges.

The demonstration on Sunday afternoon was much calmer. More than 2,000 protesters joined faith leaders in First Ward Park to sing hymns and process around Uptown. Mayor Lyles was out, donning a mask and speaking with protesters about their concerns.

As protesters marched around Uptown, they chanted the names of George Floyd, Ahmaud Arbery, and Breonna Taylor, all Black Americans who were killed in recent weeks.

Tensions rose throughout the course of the night Sunday. Police in riot gear tried to disperse crowds. A few protestors threw bottles and rocks. 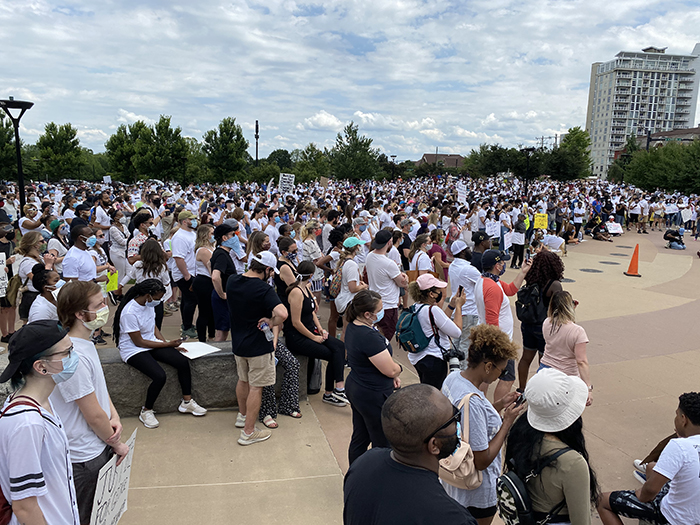 Arrests: Police arrested 15 people on Friday and 30 on Saturday on charges ranging from assault on a government official to failure to disperse. On Sunday, CMPD says they arrested “more than 15 protestors,” including one for hitting an officer in the face with a rock.

One of the people arrested on Friday for failure to disperse was city councilman Braxton Winston, who issued a statement through his campaign Saturday that said he participated in “in an attempt to de-escalate the tensions between police and the citizens of Charlotte.”

Confusion among protestors: In Charlotte and in other cities, questions arose over who started certain protests, whether they were from here, and what intentions certain agitators had.

Activist Kristie Puckett Williams, who works with the ACLU and was arrested on Friday night, was dubious about why local protesters would organize a protest in west Charlotte, near historically Black neighborhoods.

“I was like … ‘It’s nasty? On Beatties Ford Road?” Williams said.

State officials also say municipalities can make their own decisions about curfews. In Charlotte, local leaders have not yet implemented one. Protesters at First Ward Park on Sunday, May 31.

“I fear the cry of the people is being drowned out by the noise of the riots,” Cooper said.

Cooper also decried the fact that many small businesses already financially hurt by the coronavirus shutdown have been physically damaged by the protests.

But, he said, “We cannot focus so much on the property damage that we forget why people are in the streets.”

City councilman Tariq Bokhari said in a livestream over the weekend that he hopes the message of protesters isn’t anti-police.

“It ain’t the 1990s. It’s not N.W.A.,” a reference to the 1980s group whose title was chanted all around the city this weekend: “F**k Tha Police.” “It’s a different time and a different era. And while there are still systemic injustices, that message is tired,” Bokhari said.

Ray McKinnon, a pastor and community organizer, was out on Sunday to protest peacefully with demonstrators in First Ward Park. McKinnon on Saturday lamented the fact that CMPD arrested Winston, who gained notoriety as one of the lead protestors in the 2016 demonstrations for Keith Scott, then was elected by the people of the city as an at-large city councilman the very next year — and then again two years later.

“It’s just, the gall of this man to have come to notoriety in the city because of them and now he’s technically one of their bosses, they can’t stand it,” McKinnon told the Agenda Saturday. “They’re gonna make sure he stands in his place.” 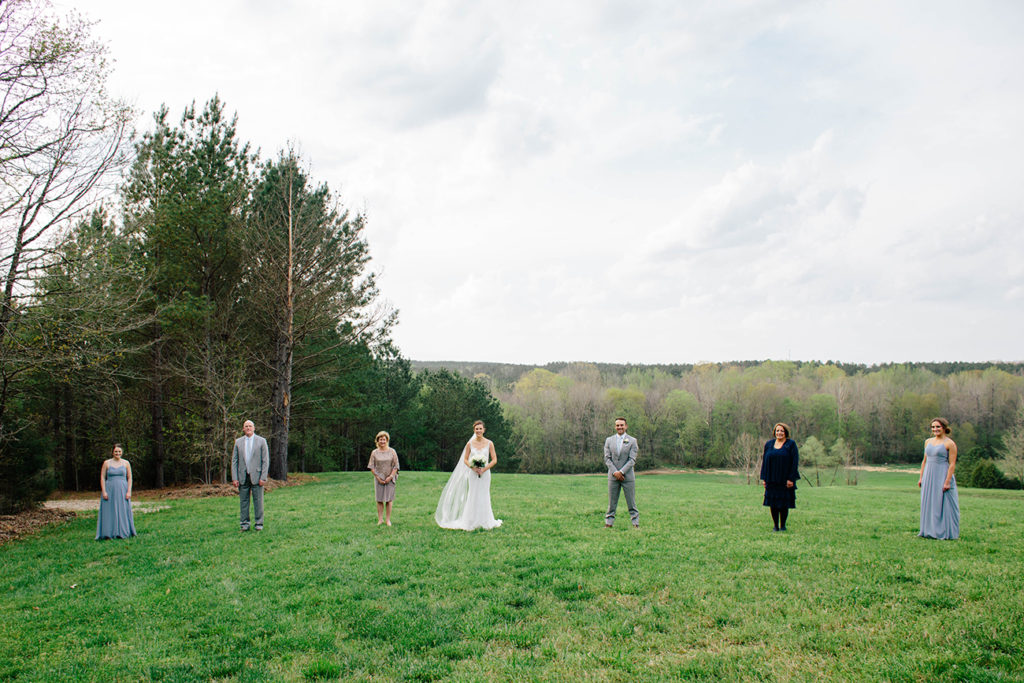 What it’s like to get married during a pandemic