Poop in the park: A parent’s survival tale 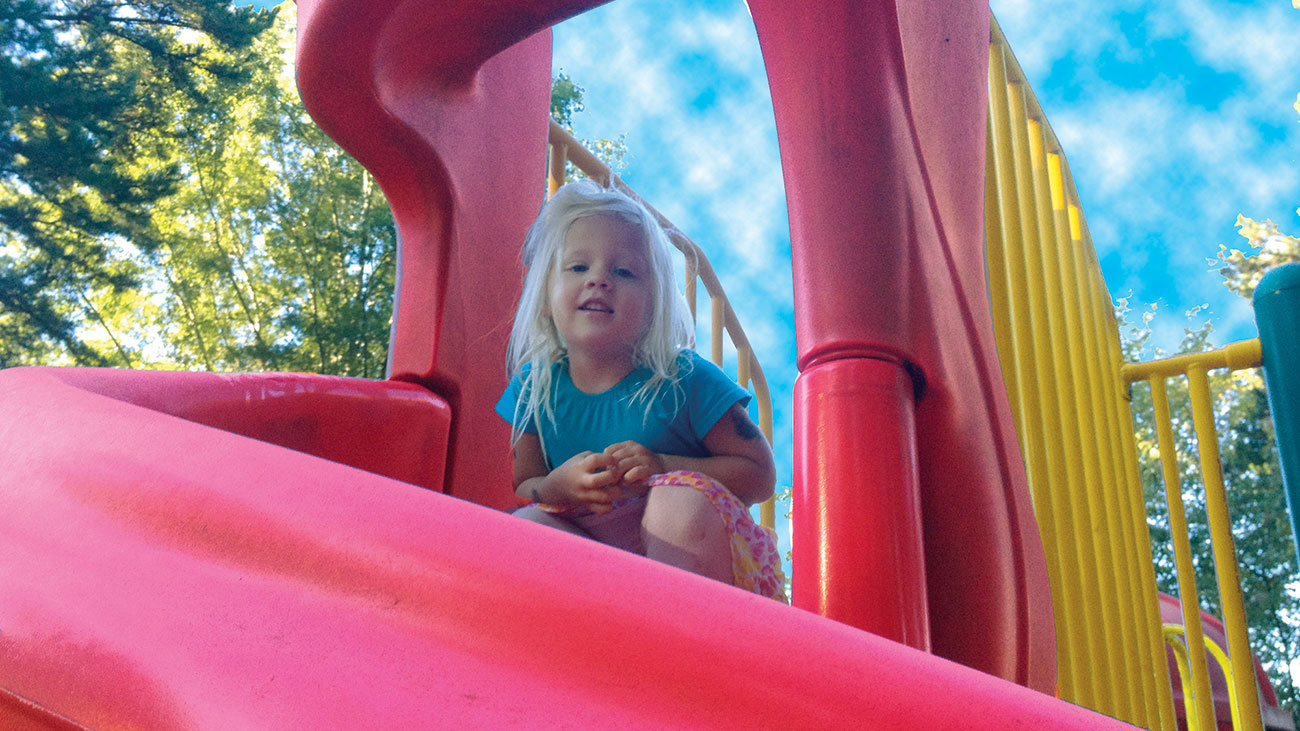 I awoke one Saturday morning last summer as I typically do. I was lying near the edge of my bed and I felt a presence in the early morning light. I opened a crusty eye to see Kid #2’s nostril, which meant my nose was nearly in her mouth. Before I could pull back, she spewed forth a throaty whisper that started somewhere in her large intestine, traveled through her wonderfully pot-belied torso, and welcomed me to a new day, “Heeeelllllloooowwww daddeeeeeee.”

One time I bought lamb chops at Trader Joe’s that contained a warning about a terrible, brief odor when first opening the package that was a result of the vacu-seal process and not the freshness of the product. The smell was so bad that I couldn’t fathom putting the delicious meat popsicles anywhere near my mouth. I feel the same way about kissing my daughter after she mouth farts to wake me up in the morning.

On this particular morning, my wife wasn’t feeling well so I did what I do whenever I find myself stuck with two kids and nothing to do – we went to a park in the Charlotte area. I’ll keep the park anonymous for the sake of the people who frequent it. Let’s just say it was a nice park with a good mix of age-appropriate playground equipment that kept their interest for longer than ten minutes. It also had close bathrooms, which was important because Kid #2 was in the potty training process.

I feel the inclusion of the word “process” is necessary because it took about five months longer to potty train her than expected. I potty trained Kid #1 in one weekend while my wife was gone. We went to Target and bought a five pack of Batman-themed underwear and a Gatorade. I drank the Gatorade in the parking lot, he gave the Joker a golden shower on the way home, and he spent the rest of the weekend peeing in the Gatorade bottle when we couldn’t make it to the toilet. He hasn’t liked the Dark Knight since then and I still can’t drink lemon-lime Gatorade. We all make sacrifices.

Last spring, as we apartment surfed while building a home, we thought it was the perfect time to potty train Kid #2. Let her pee all over the apartment rug instead of our new house. So one weekend, Kid #2 and my wife made the pilgrimage to Target to buy a five pack of Hello Kitty underwear. Three days later, after man-size crapping her shorts for the entire weekend, we returned to Target for reinforcements. Thus began a six-month period with so many horrific accidents that “underwear” was added to the weekly shopping list.

Like any good parent, not once did we yell at her or make her feel bad after an accident. Not the time she stood on the pool deck at the Harris YMCA with her head between her legs, watching piss pour out of her bathing suit as other parents watched in horror. Or the times (times, not time) she finger-poo painted her crib during naptime. “No big deal,” was our common refrain. And during the few times when she felt like she’d done something wrong, I gave her a big hug and told her, “It’s ok honey, I pee my pants sometimes, too.” And her shame was a rapidly fading memory.

So there we were, last summer, at the park, roughly two months into the process. It was a perfect summer day when the temperatures stayed in the low 80s and the sun bounced in and out of the clouds. Kid #1 hopped from playground feature to playground feature, while I followed Kid #2 to make sure she didn’t perform a base jump from a tower slide. A dozen or so children milled about, and most of the parents sat on the perimeter engrossed in their phones.

I gave the “We’re leaving in five!” warning as Kid #2 ascended to the tallest twisty slide – a double corked behemoth that she refused to scale until she watched her brother do it moments earlier.  I looked up and she smiled at me. I smiled back. It was one of those gleam-in-your-eyes moments that are familiar to any father and daughter.

As she returned her focus to the slide, I noticed something unusual sticking out of her purple, ruffled shorts. “Honey, is that a leaf or a … a stick … or … oh no. Oh, please no.” Before I could yell stop, she jumped straight up, hung in the air for what felt like minutes, smashed her rear end on the lip of the slide, and careened down the tube with the happiest smile I have ever seen on a person’s face.

When she came to a stop at the bottom of the slide, her joyful eyes met the panicked look on my face, and she knew something was wrong. Our eyes drifted toward her legs and then back up the slide, and we surveyed the four-inch wide smear of sewage that, all told, stretched the entire length of the twisty slide. Some fourteen feet in total. Nearly six square feet of numero dos.

There’s no playbook for parenting, but there are plenty of resources that provide answers to nearly every challenge you’ll encounter. There is nothing that outlines how to handle a child who butt butters a twisty slide at a public park.

I surveyed the area and assessed the situation. The two parents who weren’t catching up on their Facebook feeds quickly grabbed their children and made a silent and swift exit. The others didn’t see what occurred, yet one more reason to leave your phone in your pocket while at the park.

I positioned Kid #1 at the top of the slide and told him not to let anyone, under any circumstances, go down the slide. I grabbed my soiled daughter and sprinted to the nearby bathroom, but only found a hand blower and two empty toilet paper dispensers. I ran back outside and grabbed a handful of park newsletters hanging between the men’s and women’s room, and cleaned her up as much as a person can using glossy paper. I discarded the newsletters, underwear, shorts and shirt in a trash can, tied the bag, and ran out into the parking lot to toss it in a dumpster so I didn’t permanently scar the olfactory faculties of the Monday morning janitor.

We exited the bathroom at lightning speed and headed for the car about 20 yards away. I threw a quick glance to the left to make sure Kid #1 was still manning his post, and I proudly witnessed him shoving an older child and admonishing, “Kid, what’s WRONG with you? My sister POOPED on this slide.” Later I would commend him for his bravery, telling him that it was his efforts that kept dozens of children from going home with feces on their clothes. He responded by asking me how a kid could get my favorite candy on his clothes. After a brief back-and-forth to understand what he was saying, I spent an absurdly long time clarifying, “REEse’s. Ruh-ruh, Reese’s. FEEces. Fuh-fuh, Feces. Hear the difference?”

I plopped down a now nude Kid #2 next to the car, and frantically searched for anything could serve as a buffer between her bowel-caked body and my car, and miraculously found a pack of dried up wipes in the glove compartment. One more trip back to the bathroom to rehydrate the wipes, back across the parking lot (and a shout to Kid #1, who had briefly lost interest in manning his post), wiped off Kid #2, dressed her in her brother’s swim trunks and strapped her shirtless in the car seat.

I sprinted back to the playground and yelled “GO TIME GO TIME GO TIME” to Kid #1, my standard message to get in the car as soon as possible without the two-dozen questions that normally follow my requests for him to get in the car. I generally think he’s a very intelligent child. The fact that turned to ride down the twisty slide, only making an about face when I yelled, “NONONONONO,” makes me think he’s going to be living at home well into his 30’s.

Contorting my body, I used some more brochures and the last few Wet Wipes to discreetly mop up every last skid mark on the slide.  Loudly, I announced to the remaining families in attendance that they might not want to use the slide today. Two waved a gesture of thanks, two ignored me and one was showing her kid how to play cell phone video games. One final trip to the bathroom to disinfect myself, back to the car, and we were gone.

I glanced at my phone, noticing the time stamp for a text I’d received seconds before Kid #2 took her fateful plunge. “About four minutes ago.” The entire episode lasted less than 240 seconds.

We barreled up the road toward our apartment in silence. After a few minutes, my phone rang and “Wife” appeared on the caller ID. I answered without saying anything. “Hey, honey. Are you there? I think I might be feeling better,” she said. I paused, and calmly but tensely replied, “Oh. My. Hell. Your daughter. Just took a steamer. Down a double barrel twisty slide. At the park.” Silence. I looked in the rear view mirror and realized I was making eye contact with Kid #2 for the first time since her perilous log ride. Her head was bowed and her hands covered her nose – a universal look among toddlers that any parent will recognize as shame or embarrassment.

I hung up the phone, pulled into a funeral parlor parking lot and put the car in park. I took off my seatbelt and turned to the back seat. “Hey,” I cajoled as I rubbed her knee through the over-sized swim trunks. “Hey, it’s OK honey. Daddy poops on the twisty slide sometimes too.”

She lowered her hands and smiled at me, and said, “Ew daddy, that’s ew.” 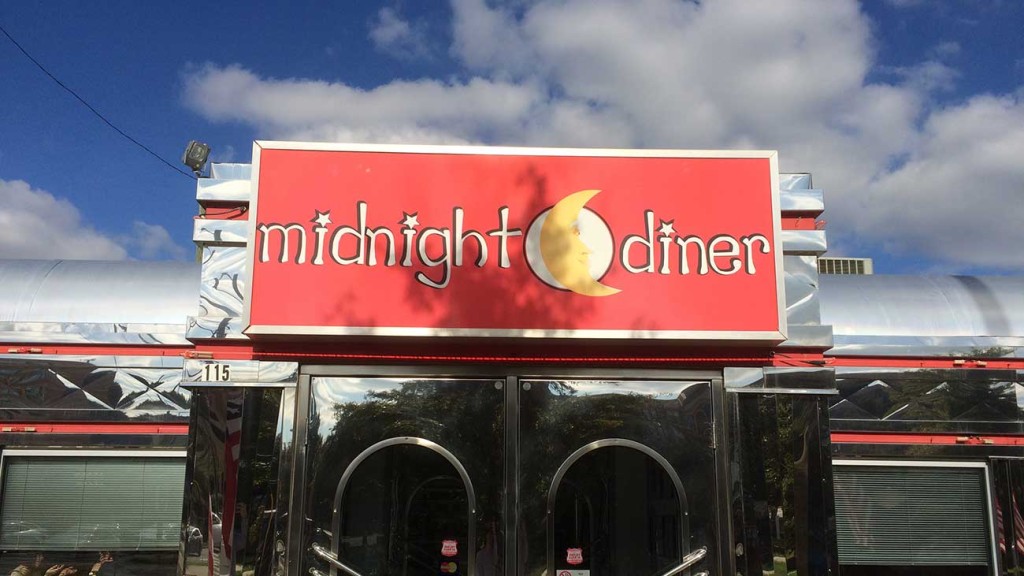