Earth Day: More waste, cleaner air, and other side effects of COVID-19 on Charlotte’s environment 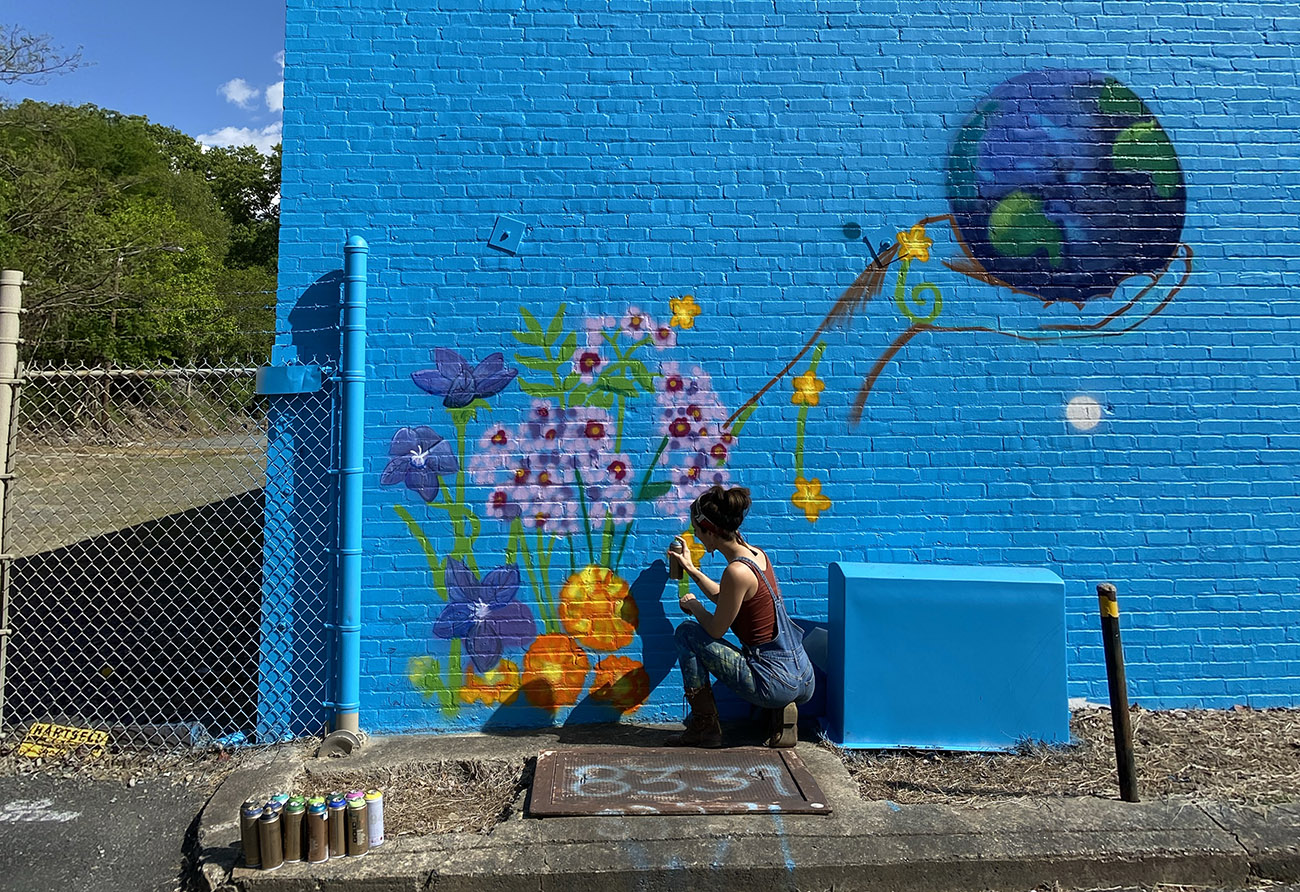 Fifty years ago, on the very first Earth Day, about 30 high school and college students gathered outside what was then Charlotte’s City Hall and stood around a half-ton heap of trash.

The protest made the front page of the Charlotte Observer on April 23, 1970, along with an image of students dancing around the pile, playing “Ring-a-Round the Garbage.” About 45 miles north in Salisbury, students at Knox Junior High wore surgical masks “to dramatize the evils of air pollution,” the Observer reported.

These students were among millions of Americans who called on the U.S. to address a mounting health crisis.

In Charlotte, 2019 was a monumental year for environmentalism. The city began to tackle its ambitious Strategic Energy Action Plan (SEAP), which set goals to significantly reduce the city’s greenhouse gas emissions by 2050. And Swedish teen activist Greta Thunberg visited Charlotte to strike alongside young Charlotte activists, including Mary Ellis Stevens.

Earth Day this year is different because of a stay at home order, which restricts non-essential activities like mass gatherings, which addresses our latest public health crisis: coronavirus.

But parts of the scene from 1970 are also familiar to today — the masks, mounds of residential trash, and even a small protest against government officials. 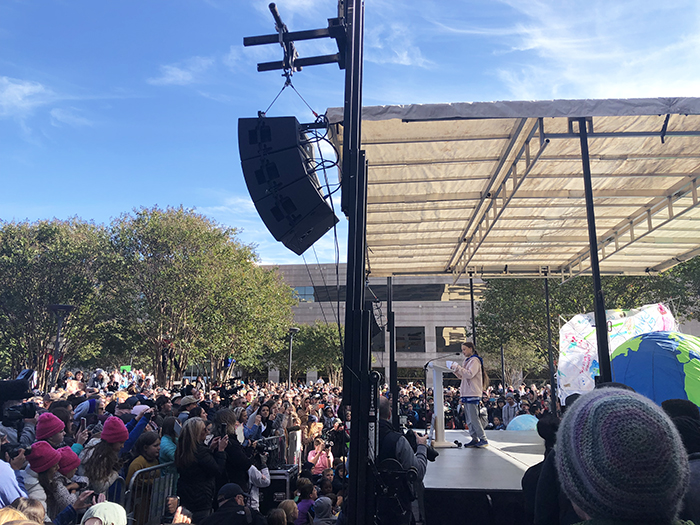 Charlotte has made notable progress since that first Earth Day, says Shannon Binns, founder and executive director of Sustain Charlotte, a nonprofit that advocates for sustainable urban growth.

For one, the air is cleaner. Charlotte has the second-largest tree canopy in the country, which captures carbon dioxide and improves air quality. In the last 50 years, there’s also been an increase in fuel-efficient cars and public transportation options.

Still, cars are ingrained in Charlotte’s culture, much like other Sun Belt cities that boomed after the advent of the automobile and connected neighborhoods with highways instead of sidewalks.

Binns calls the city’s dependency on cars the single biggest hurdle for sustainability.

“There’s high environmental and economic costs to it,” he says, “but it’s such a dominant part of our culture, very few people even question it.”

An unexpected and quite literal bright side to the global pandemic is the sharp decline of cars on the roads, Binns says.

According to a review of air pollution readings by the Observer‘s editorial board, Charlotte has had far better air quality this spring compared with last year.

Of course, the stay at home order is temporary. Once businesses in the state can reopen, cars will return and streets will clog during rush hour again.

“It’s not a fall,” says Stevens, the 15-year-old climate activist. “It’s just the lag. As soon as business as usual is resumed, those levels are going to spike right back up.”

Under the stay at home order, one of the few things Charlotteans can do right now is go outside.

Stevens says she’s noticed a lot more people outside. Birds chirp in the background of our phone call on Tuesday morning; even Stevens is outside working.

“I’m just hoping that after this is all over, if it ever is, that people will continue to be outside and to continue to appreciate the outdoors,” she says.

Before coronavirus, Stevens was working with young climate activists around the world to plan a “mass-mobilization” event in honor of the 50th anniversary of Earth Day. Stevens’ past strikes, typically held every Friday outside of Charlotte’s Government Center, have drawn anywhere from zero to 1,000-plus people.

This Earth Day would have been the biggest event yet, she tells me.

Since the coronavirus outbreak began, Stevens has been “striking” from home. Charlotte activists who participate in the digital strike, as she calls it, post photos of themselves holding a sign and then all meet on Zoom to discuss climate-related issues.

Instead of gathering in person on Earth Day, Stevens is hosting a virtual youth activism training session so they’re ready to start striking again after the stay at home order is lifted. 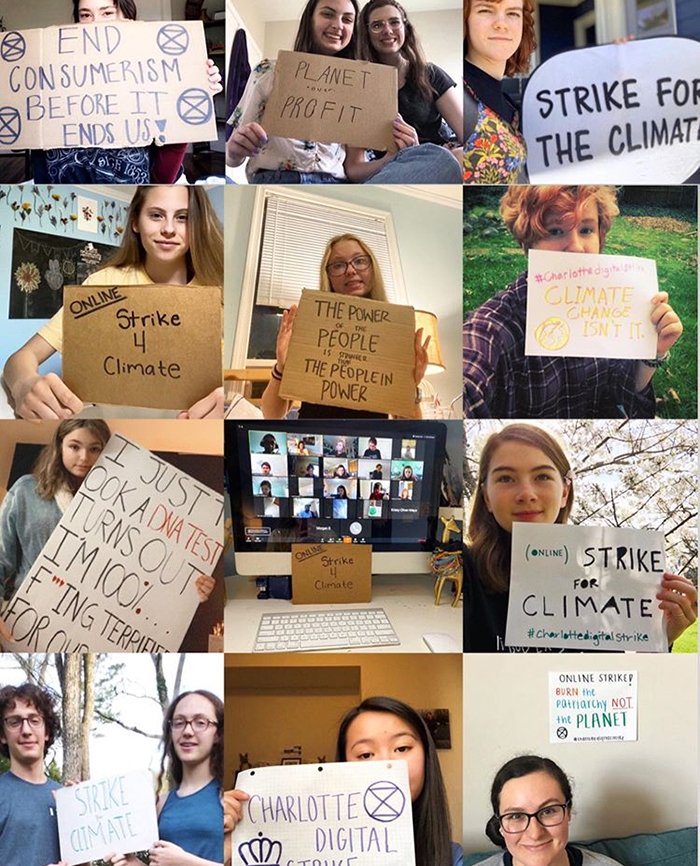 One of the greatest burdens of COVID-19 on Charlotte’s environment is waste, says Amy Aussieker of Envision Charlotte, a nonprofit that works with public and private organizations in the sustainability space. (You may have heard of Envision because of its Innovation Barn project.)

The city isn’t creating tons more trash than it was previously. But with donation drop-offs at places like Goodwill and Salvation Army closed, more clothing and household items are ending up in the landfill.

Aussieker says “aspirational” recycling is a huge problem, especially as more people clean out their closets and spend more time at home. Aspirational or “wishful” recycling, as the city calls it, is when people recycle an item (like a takeout container) thinking it’s recyclable, but it isn’t. These often wind up contaminating items that are recyclable.

Couple that with a lot more takeout because restaurants are closed for dine-in service, and some of Charlotte’s recycling centers are overwhelmed.

But Aussieker isn’t discouraged. She sees this waste — namely empty and greasy takeout containers — as an opportunity.

And Aussieker has big plans for those takeout containers.

Within the next three to four weeks, she says Envision Charlotte will have the ability break down these containers into filament, and then be able to use that filament in 3D printers to create face shields, a necessity for healthcare workers on the frontline of COVID-19.

It’s an example of how a circular economy could work, an economy that recycles resources and ultimately trims down those heaps of trash.

“Now’s the time for Charlotte to be innovative,” Aussieker says.

Featured image is of Sydney Duarte (Duarte Designs) painting a new mural on the side of the under-construction Innovation Barn in Belmont. 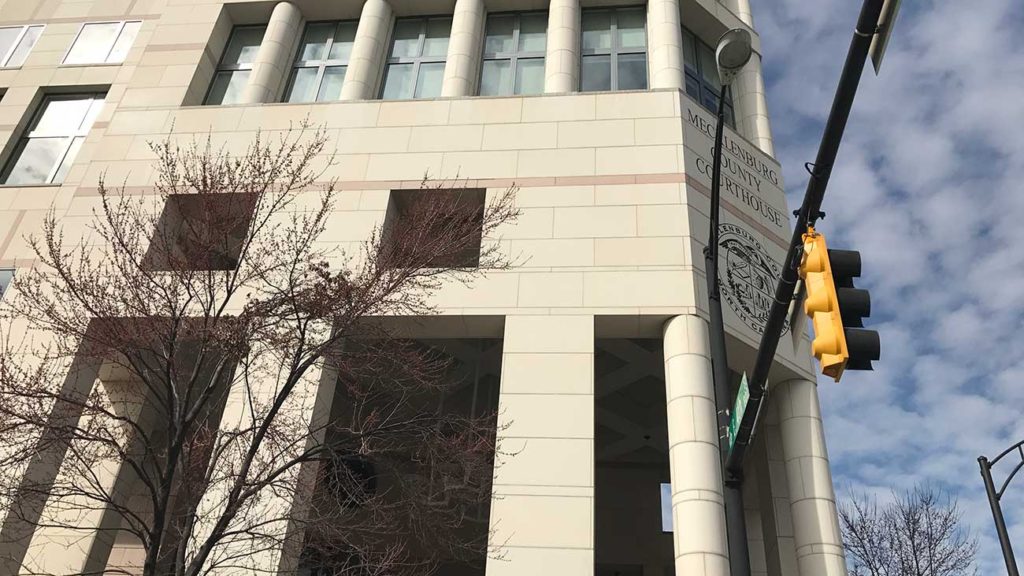