Editor’s Note: Jason got the scoop on the building that’s displacing South End staples Common Market and Food Truck Friday, and he’s not happy with what he saw. The plans filed with the city are not set in stone, but are pretty far along.

First, look at what’s planned. Jason will pick up below the photos. Let me start by saying I defended this project for a long time. Dimensional Fund Advisors is spending $100 million-plus in Charlotte, bringing jobs. The company committed to enhance the urban experience and integrate into the community. It all sounded great on paper. I defended it against those who said, “But OMG we are losing the Food Truck Lot and Common Market.”

I defended it by saying DFA and land owner Gaines Brown seemed genuine when they were talking about moving the community forward, and that even though we are losing some historical buildings, we gain much more.

However, after seeing the initial plans filed with the city, I cannot defend this project anymore. It goes against everything we should be looking for in a project like this.

The destruction of our history

The continued destruction of anything historic in our community is an ongoing plague that the folks behind “Historic South End” have yet to address. The corner of Tryon & Camden has some fantastic older buildings. Why build a minimal height monstrosity of glass and boring design when you could save, incorporate and build around the existing buildings by going up?

Here is an example of a project in Durham. It is a new apartment complex where, instead of tearing down all of the history, is at the very least saving the face and incorporating it into the final design. Yes, there is retail, and that is certainly a great thing, but rather than put it street front, they decided to set it back in a plaza space that will only serve office workers. Yes, there is a good amount of public space, and that is also certainly a great thing, but it is not properly utilized and should be the center of the project, rather than the border (that should be reserved for retail store fronts).

People who are really into modern suburban office design will love it, but they should be in Ballantyne, not South End. Large, boring, blank walls cover the project when unique design could have been incorporated to the Camden-facing side. Why build a mid-rise project with no unique design features when they could have just gone up, saved the old buildings and added a cool tower to extend the skyline?

Why does Charlotte have an obsession with massive lobbies? It is quite possibly the biggest waste of space in any design. The lobby with this project will likely be underutilized and a missed opportunity. Look at the placement of the lobby, at the corner of Tryon and Camden. Why not shrink the lobby and salvage the existing buildings? There’s no good reason that I can think of, although I’m sure with some marketing spin there is some nonsense reason.

While there is much more to complain about, I won’t do it here. I am merely presenting what went wrong and what should have been done better. Dimensional Fund Advisors is not integrating themselves into this neighborhood, but rather stomping on the history and plopping their project where they happened to buy land. It’s not that we don’t want Dimensional here, we just don’t want them right here, with this design.

Now I have said a lot of bad about the project, there are some redeeming qualities.

I’m sure that when these plans go out, Dimensional, Cousins Properties (the developer), Mr. Brown and others will go on defense mode, defending this, defending that. But know upfront what they could have done better, know up front what they did wrong.

What can we do?

Well this happens to be a unique opportunity where this hasn’t gone for rezoning review yet. I urge folks to contact the representative for the area (LaWana Mayfield, [email protected]), contact Dimensional, contact Cousins, and contact anyone with power who will listen. The state took away our right to protest petition, but that didn’t take away our right to be loud and stand up for what matters.

I am not asking Dimensonal and Cousins to abandon these plans and abandon the area. What I am asking is for a more thoughtful design. Something that incorporates itself into the neighborhood rather than disregards it. Something that pays attention to the needs of the area (street-front retail, intelligent design, character) rather than plop something on a spot for the highest bidder. I encourage them to all take a look at the area and the design to reevaluate.

This isn’t an attempt to bash Dimensional, Mr. Brown, Cousins or anyone else involved with this project. This is an attempt to bring to attention a continuing problem in the city, lackluster design and no care for the community.

This is an attempt to bring a voice to those who don’t have one and speak up.

This is an attempt to get the attention of those involved with this project. To have them open their eyes and reevaluate. To take time in the design process and truly become of a part of the community they want to join.

Because as it stands right now, they’re going about it all it wrong. New kid on the block destroying a focal point of the community they want to join. Not a good look. 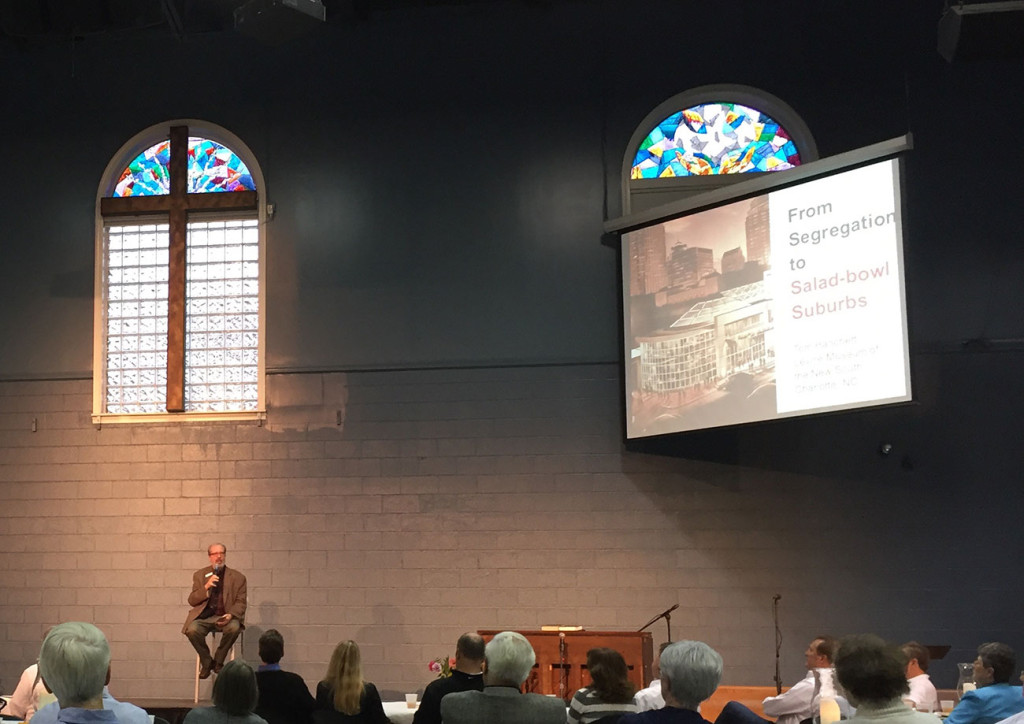 How Charlotte came to be a segregated city