The coronavirus generation: We became parents of a baby boy in the cradle of a pandemic 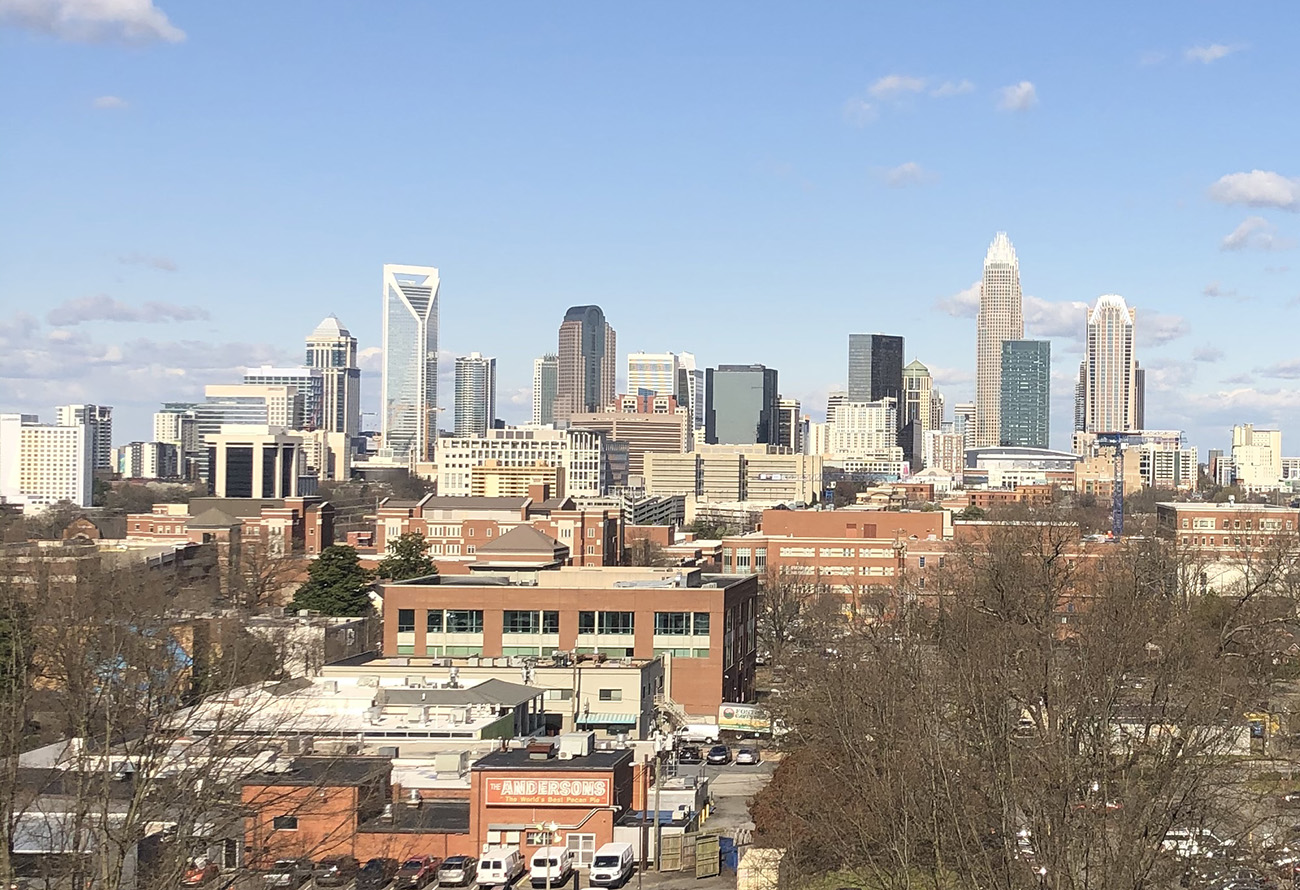 The afternoon before all this, I got sidetracked in aisle 5 by some cheddar kangaroo crackers. They’re on a bottom shelf, a long way from the eye-level presentation of their famous cheddar cracker cousins, the Goldfish.

I thought of a joke, a bad one, a dad one, the kind I’m excited to try on my son one day, before he’s consumed by cynicism and other ailments of the adult world: I bet cheddar kangaroos taste good, but I worry they can’t swim.

This was March 5. It was yesteryear; it was two-and-a-half weeks ago. At 11:15 p.m. that night, our baby was on his way. Laura and I gathered our belongings for the long hospital stay. We must’ve looked silly, darting around in our dim dining room, shadows flickering against the walls, packed for the end of the world. Or the beginning.

Three or four changes of clothes. Toothbrushes. Books, for some reason. The bag of provisions I’d picked up that afternoon: the Goldfish, of course, but also popcorn, salted almonds, and other important things I snuck in.

“Do we really need this beef jerky?” Laura asked.

What a world we didn’t know we were leaving behind. This was back in the bygone era when Cam Newton was the Panthers’ franchise quarterback, when we were still in the same calendar week that Donald Trump rallied in Charlotte, when unemployment was at its lowest since before 9/11, when grocery stores had toilet paper, when local restaurants served customers food at tables.

When the United States had all of 200 known positive cases of coronavirus. When North Carolina had one.

We shot up to the eighth floor of Novant Presbyterian, never considering that evil might lurk on an elevator button. We checked in at 12:05 a.m. I know this because if hospitals have anything in abundance, it’s clocks, and one of the curses of being a narrative writer for 20 or so years is that I can’t help but think about how time moves, and what moves with time.

For the next 19 hours, 39 minutes, Laura was the hero our son needed. The nurses and doctors were, too. And when it was 7:44 p.m. on March 6, he entered this world that was soon to shut down around him. Laura looked at him and looked at me, and I cried on her knee as the doctor dropped him into her arms. The nurses listed the military time, 1944, numbers that also happen to be the year my father was born. I looked up toward the ceiling, then back down at the boy, then at her, knowing I’d never forget the moment.

We waited until the next day, Saturday, to name him George Nevitt Graff, after Laura’s father and my great-uncle. We brought him home the next day.

It’s hard to fathom how much has changed in his lifetime.

“George is the first of the Corannial generation,” my friend Mark Peres, also a dad, texted me last weekend.

“Hell of a world you’ve brought young George into,” another friend wrote.

We’ve been in our own version of quarantine since. We’ve introduced him to our mutt, Gizmo. We’ve slept as he allows. We’ve (Laura’s) fed him at all hours of the day. We’ve (I’ve) played Springsteen records for him. We’ve (we’ve) changed a thousand or so diapers.

As those early days and nights merged into one, we were oblivious to coronavirus and any curves that needed flattening. But on Wednesday afternoon, the 11th, we saw the official word: “pandemic.”

“I feel like we should watch the news tonight,” Laura said that day.

It’s been difficult to square the mess out there with the new life in here. As I type this, I have no less than five stuffed beings staring at me — Elephant, Whale, Lamb — all of whom would be comforting companions if not for the news spilling from the television in the other room.

… reports of national public officials who knew the market would crash and sold millions in stocks before warning us.

George is in his crib, arms resting over his head, asleep and unshaken. I’ve never wanted to protect anything more. 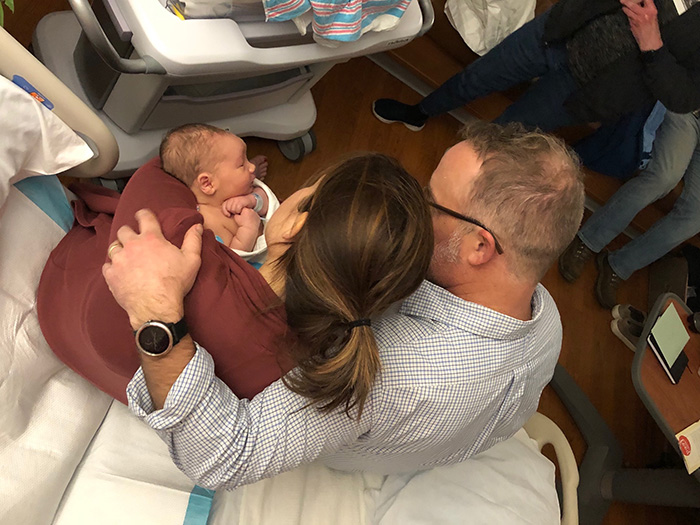 Laura and Michael, with George, on March 7

The smoke of the Challenger explosion. The people dancing on the Berlin Wall. The green and yellow flashes on the television at the start of Desert Storm. The deaths of Kurt Cobain and Biggie Smalls and Princess Di. Waco. Clinton’s big lie. 9/11. The 2008 crash. Election Night 2008; Election Night 2016. Virginia Tech and Newtown and Mother Emanuel.

We all have news marks on our timeline, those events that immediately take us back to a place and time. These are mine from my 40 years, reminders of horror and humanity we’ll pass down.

I certainly won’t forget where I was when a virus crippled the earth.

“This isn’t like anything I’ve ever seen,” our 73-year-old neighbor Gus said to me the other day when I was out walking the dog.

There’s no explosion to process on repeat, no memorial service for national grieving, no ground zero. There’s nowhere to stack up flowers and mourn.

Even on the worst night of the Charlotte protests in 2016, when a shot rang out and a man fell lifeless in front of hundreds of us in center city, at least we were all on shared concrete. And that meant something. The next night a bunch of people marched around with signs that read “Free Hugs.”

We have a longer haul ahead this time.

Charlotte’s showing up in the ways that Charlotte shows up. The school system is keeping poor students fed. Social media campaigns are helping some. The Foundation for the Carolinas and the United Way raised more than $9 million in a week. This is why we love living here; Charlotte’s a giving place full of people who care. But a worldwide pandemic doesn’t make exemptions, and every feel-good story gives way to another dozen of people getting sick, or laid off, or businesses crumbling.

We’re grasping for a handle on the what-abouts.

What about … the schoolchildren on free lunch?

What about … the nurses on the front lines?

What about … the restaurants, the bars, the homeless, the movie theaters, the banks, the barbers, and on and on?

I’ve driven around town a few times, just to get out, because we have to get out, and it feels like we’re living in a ghost of the city that was.

I’ve also gone back to read old news stories from the Spanish flu pandemic of 1918, and it’s oddly familiar. In early October that year, the city went from three cases to 40 in the span of a day. Three days later, quarantine. The big news was that the Broadway show So Long, Letty was canceled. Just up the road from here, in Winston-Salem, things were so bad they couldn’t even sell tobacco.

“Charlotte took the order to quarantine with its usual good nature,” the Observer wrote on October 5, 1918. “Early in the evening, the various shows had up ornamental placards, telling a disappointed public that the quarantine was in force. The man or woman who coughed or sneezed openly on the streets became an object of open suspicion.”

We’re still in that phase with coronavirus, trying to figure out how we in this city built on handshakes and transactions will move forward with six feet between us.

A few days after we came home, I put on a Cat Stevens album and a funny thing happened. One of us must’ve accidentally hit the button to change the player speed. That 33 1/3 vinyl rolled at 45 rpms: “Ilistentothewind, tothewindofmysoul.”

The speed seemed appropriate for the times.

We’ve been home for more than two weeks now with limited contact with anyone from outside, and I suppose that’s a pretty good sign we’re not infected, whatever that means.

We’ve slept in bursts, 45 minutes here, an hour there, in between the diapers and the worries. We’ve argued a time or two, Laura and I have, and then we forgive and forget. The wounds and Band-Aids of close living.

Laura grew up in Charlotte and has about 20 family members who live within 20 miles of us, all itching to see George someday soon. My brother, who works in construction, about the only industry that’s still working, visited on Friday afternoon. I told him to go around and meet us on the back patio.

George has been held by fewer hands than any newborn in our family’s history. We’ve tried to make up for that, the two of us. Outside, the dogwoods in our front yard are popping with white blossoms. It’s our favorite time of year, and once or twice a day I’ll take George on a walk around the yard to see it all.

We tell him how much he’s loved. We tell him he can be part of the solution to what’s wrong out there, beyond our yard. We tell him how many good folks have dropped off food on our front stoop. We tell him how many others celebrated his arrival online, people from throughout this life we’ve built in Charlotte — friends and family, good people from work, community leaders, city council members, and county commissioners, even the mayor. Democrats and Republicans, old and young, they’ve all called him beautiful. We tell George how he brought them together, if even for a quick beat in a trying time.

A few nights ago, I went out back and grilled. On my way inside with a full plate, I caught a scene from our life in quarantine.

I could hear music, an upbeat song Laura’s been playing a lot lately called “All Your’n,” by a Kentucky fellow named Tyler Childers. Behind me it was late evening and the world was gray, and in front of me the door framed a bright kitchen. I watched as Laura danced and twirled George in her arms, a mother smiling down at her son as she mouthed the words, “I’m all your(s), ’n’ you’re all mine.”

I opened the door and went inside. 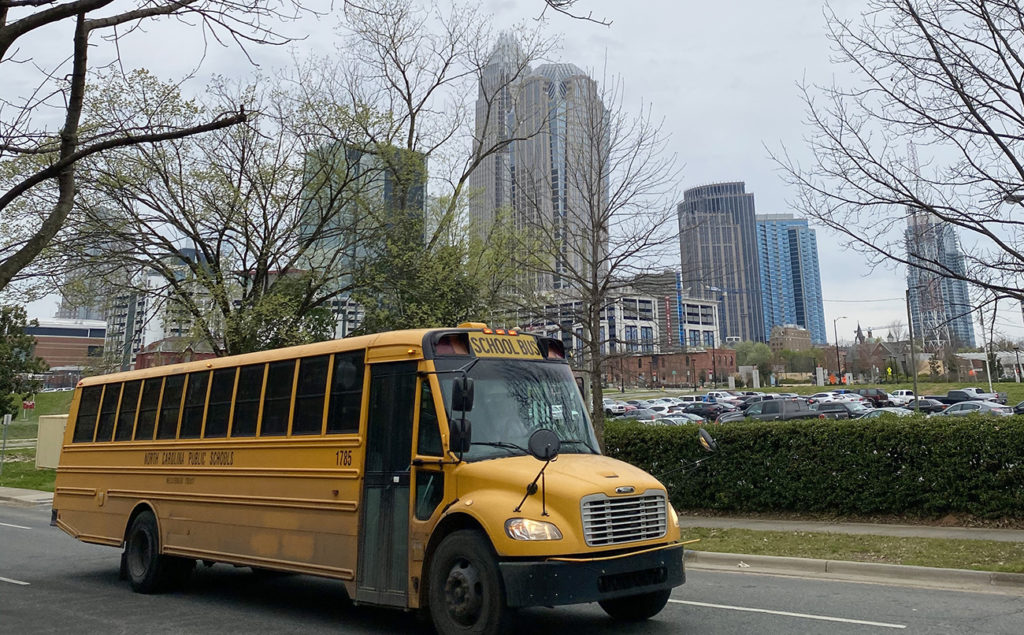 CMS is closed until May 15. Could it widen or bridge the digital divide?