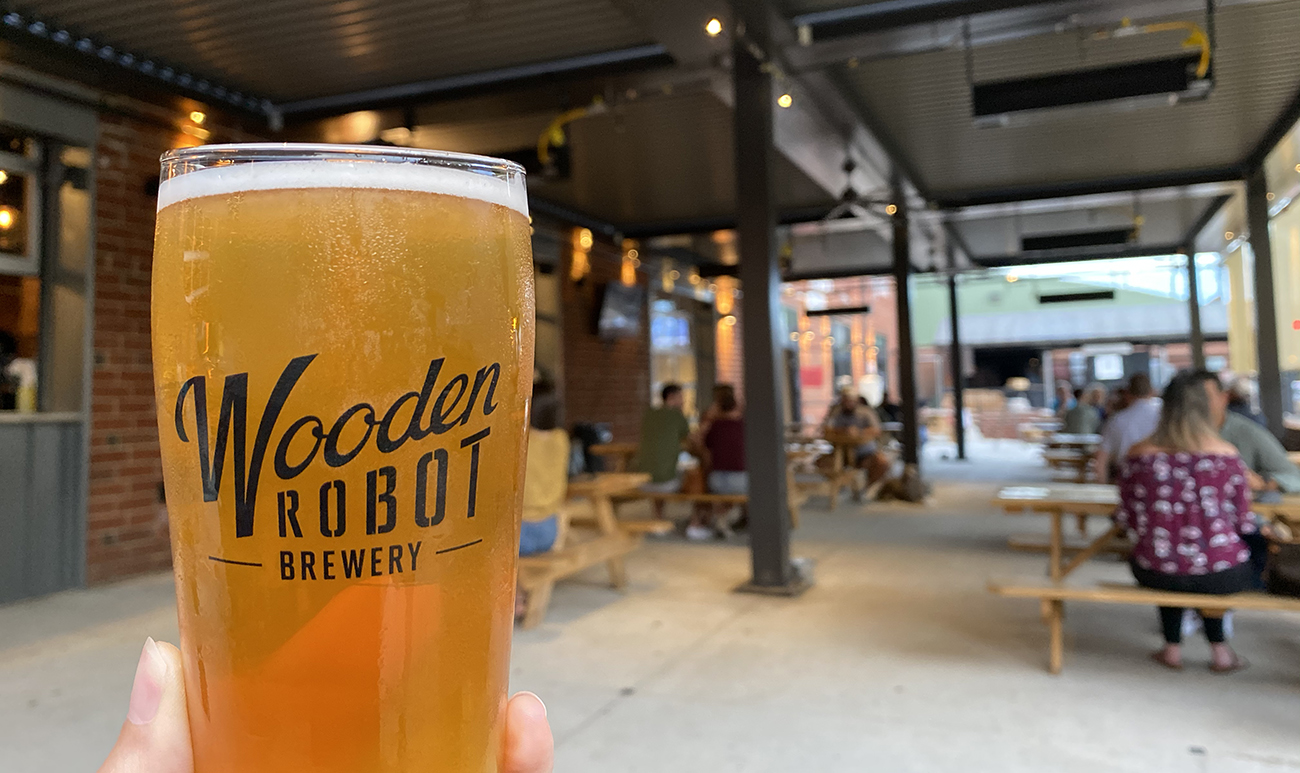 The Charlotte area now has more than 40 breweries. This is the official, definitive ranking of our best neighborhood brewery crawls.

Let me first begin by telling you that I have a problem.

I really do. Ask my wife and kids. My two dogs probably hate me too. No matter where I am or where I’m traveling, whether I’ve got a 46-minute layover or I’m on the road for a few days, I’m checking out the local brewery scene. It could be for a quick sip, a few pints or just a pic for the gram. Either way, I’m in.

The big picture: The Charlotte craft beer scene has exploded since our family moved here from Raleigh in 2014.

[Related Axios guide: Complete list and map of Charlotte’s 30+ local breweries, plus the most popular beer at each]

This has been an article I’ve wanted to write for more than a year (!).

Just before things closed down last Spring, I was asked by someone on social media where they should go for beers in one popular Charlotte neighborhood. Well you know what, @schmeggerz07? This one’s for you. Finally.

Quick housekeeping: I define brewery crawl pretty loosely, as we aren’t quite Portland yet. For the sake of the article, a “crawl” is at least two breweries that are walkable to each other within one afternoon/evening.

In closing, I’m unapologetically a 40-something, IPA-loving dad that lives in the south-Charlotte burbs. You’ve been warned.

So… Concord’s not really Charlotte, but neither is Indian Land, and I already gave them some love.

The Route: It’s tough to ignore two breweries literally right next to each other — High Branch and Cabarrus — housed in an old mill, with a space between for kids to run around and food trucks. Oh, and did I mention that High Branch is the greater Charlotte-area’s second-ranked brewery on Untappd?*

Pros: Quality and proximity to each other.

Cons: Far from Charlotte. Pack a suitcase. And if you live down in my neck of the woods, check a bag. It’s a hike, but it’s worth it.

*First place is Percent in Harrisburg if you’re interested. Another worthwhile road trip! 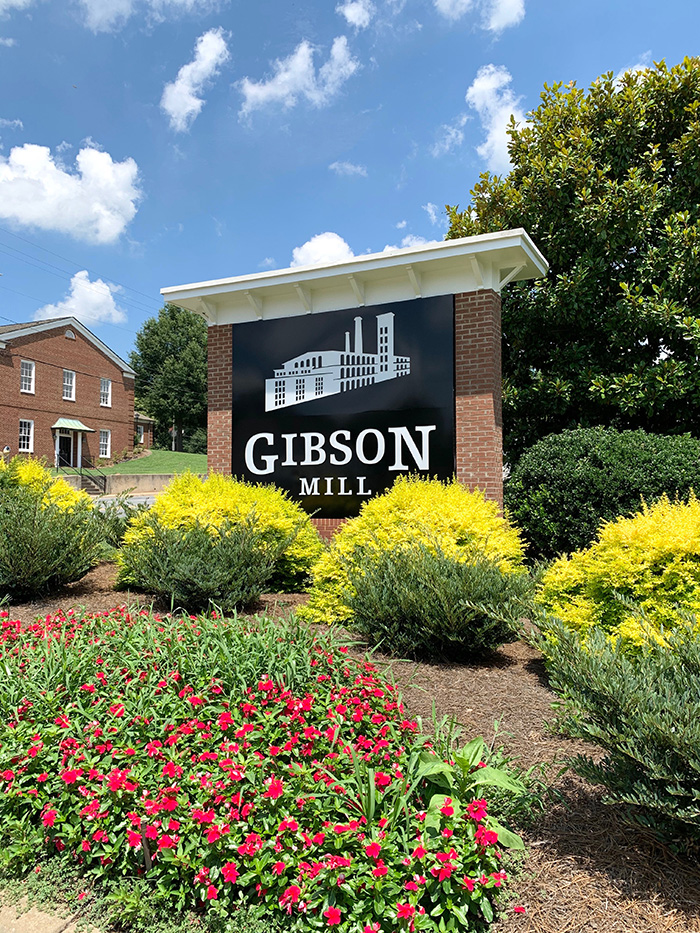 For this crawl, I’m attacking Mid-South End (MiSo? *sees self out*) and heading northeast.

The Route: Start at Suffolk Punch and Triple C before walking a couple of blocks to Lenny Boy for beers and booch. From there, hit Sycamore. The beer is solid. The place will be packed. And you’ll realize you’re not as cool as you thought you were, but it’s on Charlotte’s Brewery Mt. Rushmore. Check the box. Now that you’re in the heart of South End, you’re close to Wooden Robot and Unknown along with several taprooms, bottle shops, and great eats. Enjoy.

Pros: I’m not sure there’s a hotter neighborhood in the country. Plus, there’s a wide range of beer types that will keep everyone happy.

Cons: This tour is a little clunky, but after you hit the first couple breweries, you’ll be game for the walk.

What’s next: Later this year, Legion concept Trolley Barn Fermentory will be opening in Atherton, Sycamore is moving across the street to a new spot, and Resident Culture is opening up their second location, next to Lost & Found, in a shared space with Chilito Taco and Mostra Coffee. Did I mention this neighborhood was on fire? Sheeeesh. Look for MiSo (OK, I’ll stop) to climb these rankings in 2022. 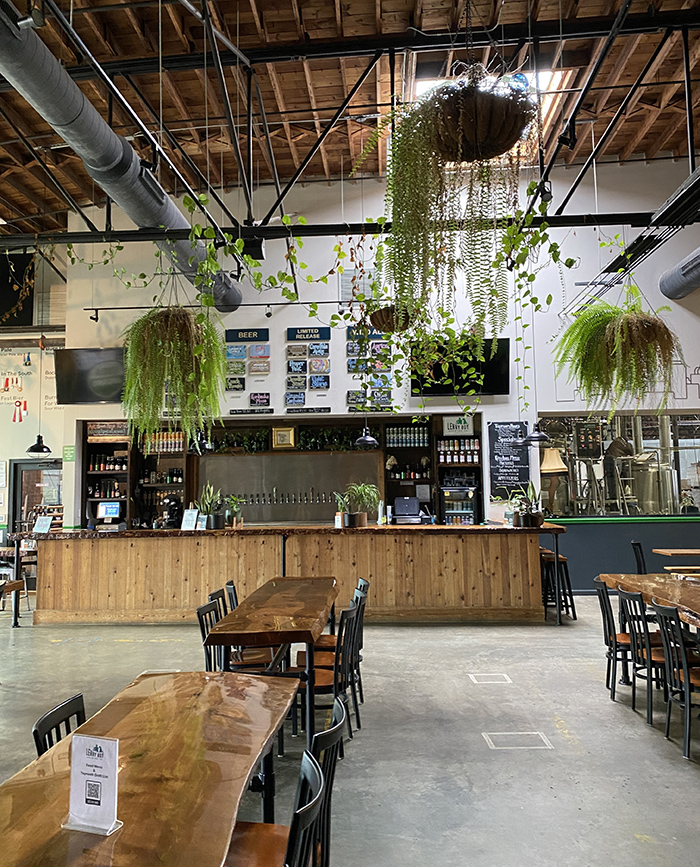 Bonus: Did you know Lenny Boy has an on-site plant shop? Read more.

The density of this area is staggering … which, coincidentally, is what you could end up doing if you aren’t careful.

The Route: Olde Mecklenburg, Sugar Creek, Protagonist’s new spot and Brewers at 4001 Yancey are right on top of each other stretched across a couple of blocks. Sprinkled in you also have Lower Left, Gilde (coming later this year!), Queen Park Social’s game room-meets-bowling alley, and multiple distilleries and cideries. Olde Meck offers one of the best spaces in the city, and if you can’t find something you like at Brewers, then I’m not sure what to tell you. This part of town is impossibly fun.

Cons: Parking. Not a ton of buzz-worthy beer for the nerds. Translation: You won’t find as many IPA lovers in these parts. Which may actually be a pro after all. *looks at self in mirror* 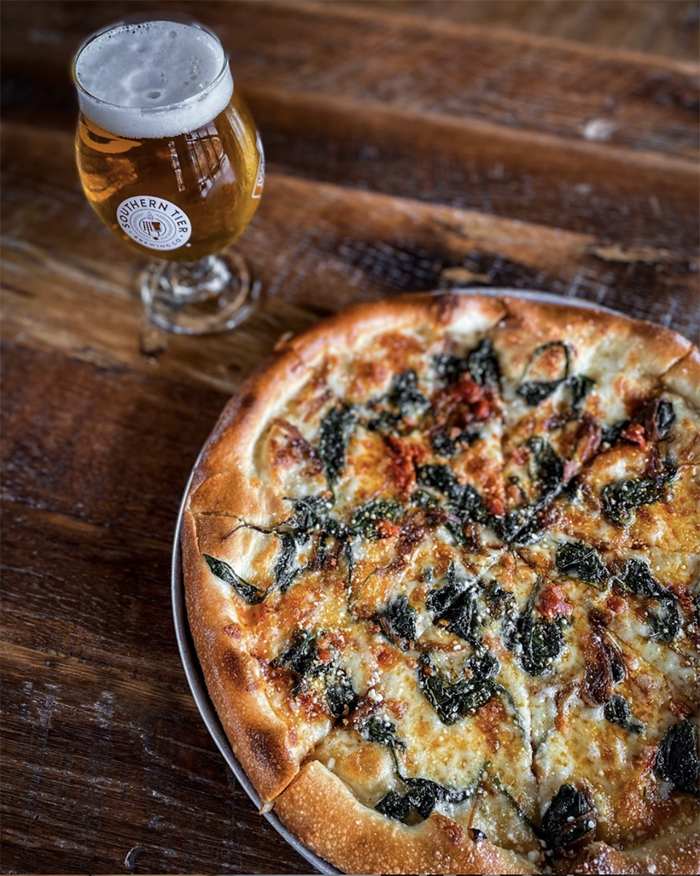 The Route: Resident Culture came out of the gates on fire a couple of years ago and hasn’t let up. They alone could carry this neighborhood into the top five, but Plaza has a lot more going on, including Legion, Pilot and Catawba, with Burial on the way.

Cons: Lotta walking. Saying Plaza Midwood is truly crawlable is probably a bit of a stretch. 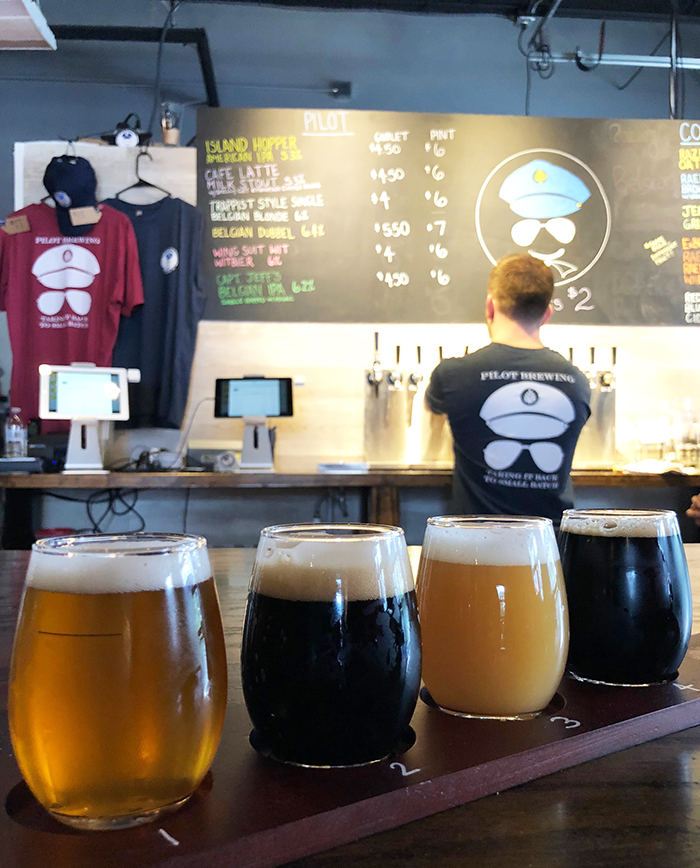 Flight of beers at Pilot.

This neighborhood is one of the best brewery crawls I’ve experienced in the country. Period. If you’re feeling really crazy, you can do an extended version, looping in three or four more breweries, including some of Charlotte’s OGs.

The Route: The specific tour I’m ranking here includes Divine Barrel, Salud Cerveceria, Heist, Protagonist and Wooden Robot’s The Chamber. These breweries stretch four to five blocks and you pass several restaurants along the way. The variety of beer you’ll get here is incredible, and this crawl is loaded with hops for IPA lovers.

Pros: I mean, c’mon. Most of Charlotte’s top five on Untappd on one tour. Salud Beer Shop is right under their brewery, and USA Today just named it Best Beer Bar in the country for the third straight year. Really strong food options.

Cons: Pound the H2O. Each of these places is worth visiting, which makes for a looooong day.

As for the extended version, Charlotte brewery icon NoDa Brewing has two locations in the neighborhood, each about a half-mile from the furthest points of this shorter crawl (although “The OG” spot is currently temporarily closed). And then if you’re really feeling crazy, you might as well include Free Range and Birdsong as well. 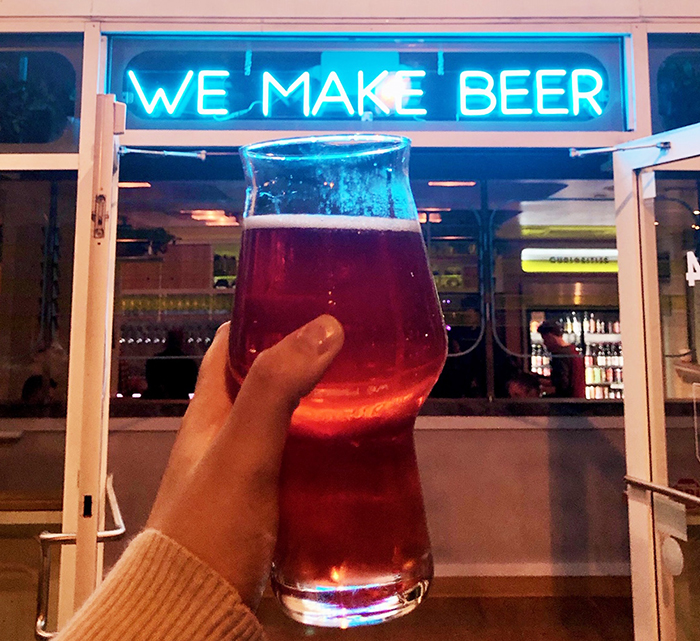 OK, internet, let me have it. I’m sure I missed something. I barely touched on the breweries listed here, and there are 15-20 more in the Charlotte area that I didn’t even name. Which is bananas.

What are your favorite brewery crawls in the QC? 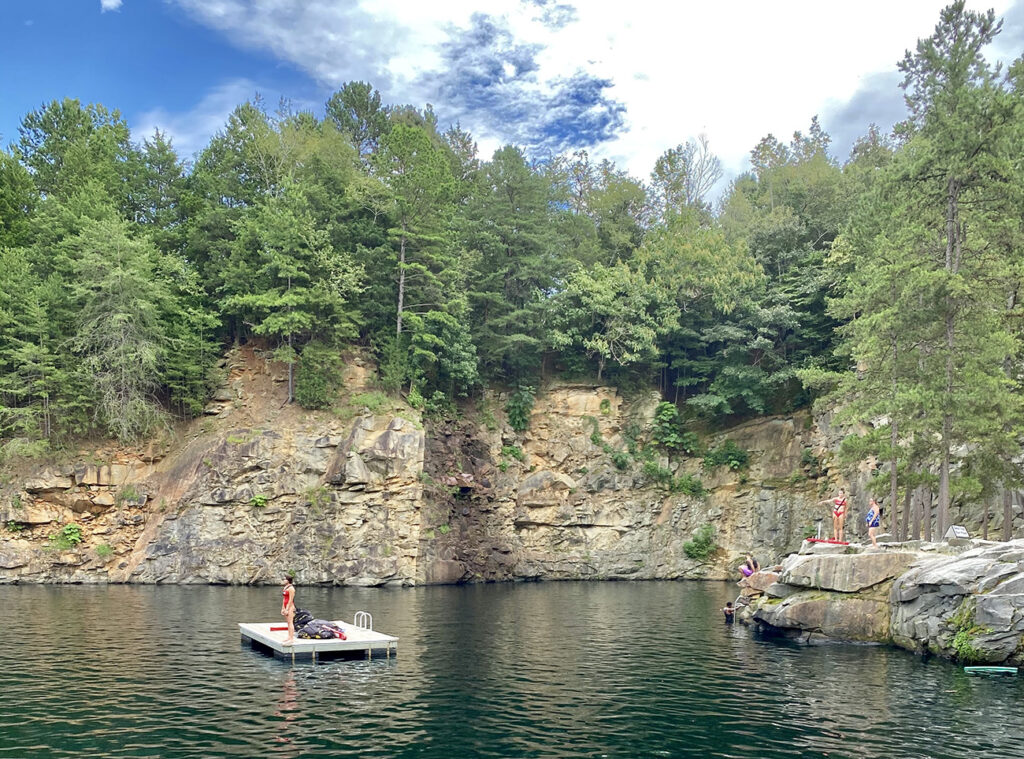 Guide to swimming at the Quarry at Carrigan Farms