Joe Biden won nearly every precinct in Mecklenburg County and cruised in North Carolina. Plus: a full roundup of 18 other primary contests 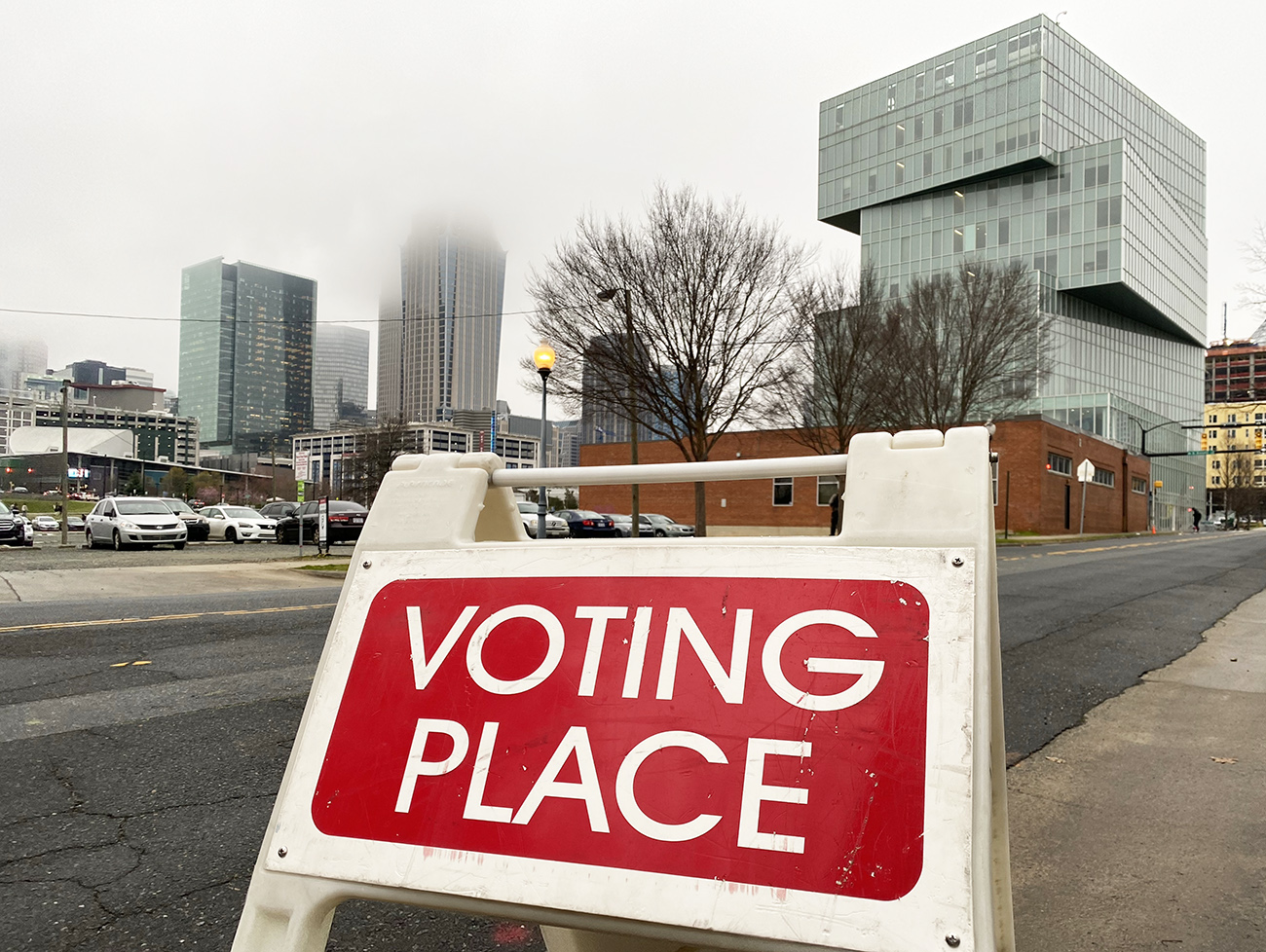 A month ago, U.S. Representative Alma Adams didn’t have much company among prominent Mecklenburg County Democrats in her endorsement of Joe Biden.

But Adams, whose 12th district covers all but the county’s southeastern precincts, had a feeling things would turn — even after Biden’s dismal showings in Iowa and New Hampshire. She believed that when the primary contests moved to the South, where more voters looked like her, Biden would connect.

On Tuesday night, she walked into Biden’s watch party at GoodRoad CiderWorks in Charlotte to a round of cheers and hugs.

Biden overwhelmed his three main rivals in North Carolina’s presidential primary on Tuesday, winning all but seven precincts in Mecklenburg County, which has 195 total. He claimed 43 percent of the overall vote in North Carolina. Next closest was Sanders, who was believed to be the Democratic front-runner last week, but finished at around 24 percent in the state.

“I didn’t put too much stock in Iowa. We know North Carolina has a very diverse community. He has a real deep understanding of the people here,” Adams said of Biden. “You need to know that your president cares about all people, believes that his or her base is the United States of America, not just people who believe what you believe.”

Adams wasn’t completely alone in her support of Biden. Former Charlotte mayor and Secretary of Transportation Anthony Foxx endorsed him on February 17 in a Charlotte Post op-ed and two days later told the Observer he’d stick with Biden “until the last dog dies.”

The dog is now very much alive. And Adams and Foxx are sure to have plenty of friends going forward.

North Carolina was one of nine states Biden won outright in the 14-state Super Tuesday, and he held a narrow lead in Maine as of early Wednesday morning in a race too close to call. 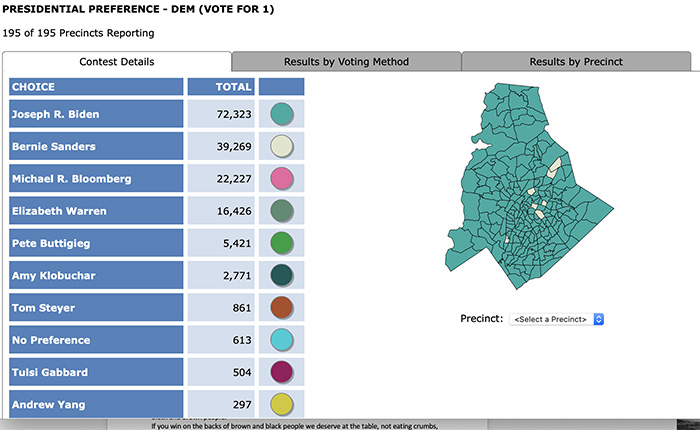 Biden rolled through the Southern states, where black voters make up a significant percentage of the population. Exit polls showed he was strongest with black voters 45 and over — which happens to be the demographic Adams and Foxx are part of.

Some exit polls showed Biden with 63 percent support among black voters in North Carolina, while Sanders was down around 16 percent. Sanders narrowed the gap among younger voters — he won big in precincts around UNC Charlotte, for instance — but not nearly enough.

Charlotte-Mecklenburg NAACP President Corine Mack arrived at the Biden party around 9 p.m. and gave Adams a hug, then took a seat under a sign that read “HBCU Students for Biden” and watched the television screen roll. She says she understands why young people were high on Sanders, a far more progressive candidate than Biden, but she spent the day canvassing for the former vice president.

“They’re sick and tired of being sick and tired. And I’m with them in those conversations,” Charlotte-Mecklenburg NAACP President Corine Mack said of younger voters. “But a lot of us who’ve been in this political arena for some time wonder, Can he get anything accomplished?” 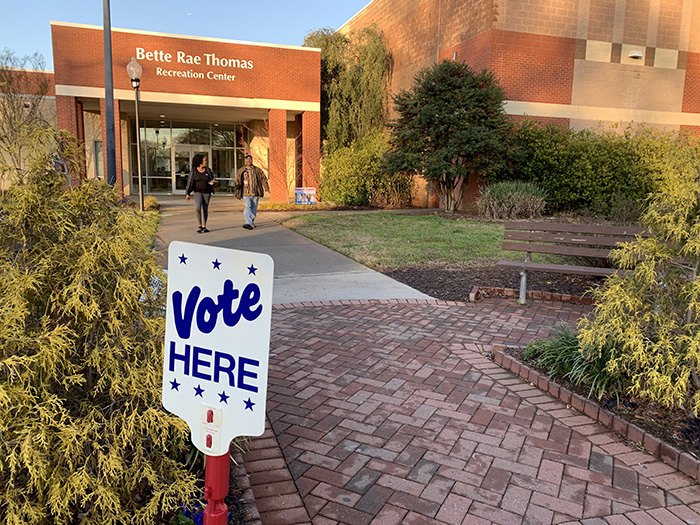 Overall voter turnout in Mecklenburg County was down by about 5 percent from the 2016 presidential primaries. Some of the drop can be attributed to the fact that the Republican side was no contest this time, with President Trump running away with it.

Clifton McRay has overseen election days at Plaza Road Children’s Academy for about a decade. Tuesday was the busiest he’s seen it for a primary, he said. Across the city, cars steadily pulled into the Bette Rae Thomas Recreation Center on Tuckaseegee Road after 5 p.m. Biden won about 50 percent of the vote there.

Bloomberg was fourth in the Bette Rae Thomas precinct, a finish that was fairly representative of his performance in most of west Charlotte, where large populations of African-American voters live. The former New York City mayor, who spent about $14 million in advertising in North Carolina and expected to do well here, was a distant third in the county. Elizabeth Warren was fourth.

Sanders voters gathered for an informal but enthusiastic watch party at Tip Top Market & Deli on The Plaza. Thirty-somethings in flannel sipped pints of craft beer, their eyes stuck to the cable news flashing election updates. Grumbling followed the note that Biden would win North Carolina.

Kevin Gobuty is a Sanders supporter who’s been knocking on doors for the Vermont senator for weeks. A high school civics teacher who lives in south Charlotte, Gobuty says he’ll support any Democratic nominee. The most important thing to him is to defeat Trump.

“It’s hard for my kids to pay attention in school when they don’t know where dinner’s going to come from, or how they’re going to get home, or where home is going to be,” Gobuty says of his students. “I feel like Bernie is the only candidate with a clear and constant message that’s going to reach those kids and their families.” 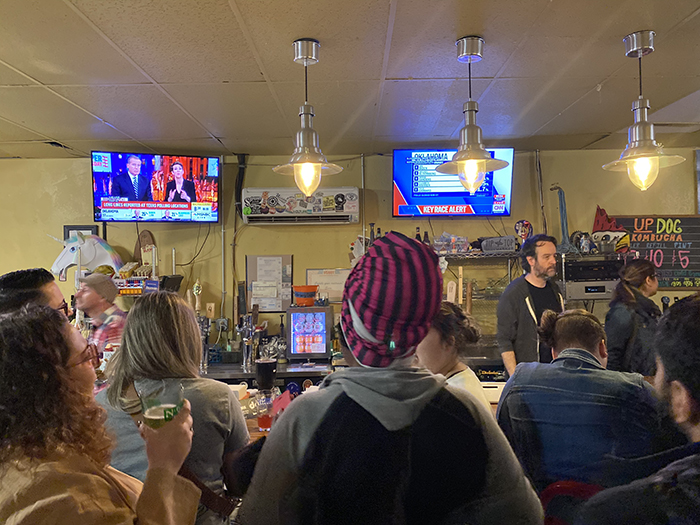 The Democratic primary wasn’t the only race settled on Super Tuesday in Mecklenburg County. Here’s a look at the other contests:

Mecklenburg County Board of Commissioners (at-large)

Democrats had the only primary in the at-large race, but it was an interesting one, including two incumbents in Pat Cotham and Ella Scarborough, along with two challengers with deep support in Ray McKinnon and Leigh Altman. Only three could advance.

In the only district commissioners race, current board chairman George Dunlap advanced to the general in District 3.

As expected, Cal Cunningham, a former state senator who serves as a major in the Army reserves, emerged from the Democratic primary with 60 percent of the vote. The win earns him a spot against Republican incumbent Thom Tillis in the general.

A former state lawmaker from Cornelius, Tillis won his primary easily, one day after he stood on stage with Trump during a rally at Bojangles’ Coliseum on Monday night. He figures to have plenty of support from the president — and by extension the president’s voters, in November.

District 9: Cynthia Wallace pulled away from a field of four candidates in the Democratic primary, scoring more votes than her three challengers combined. She’ll take on Dan Bishop, the Republican who won this seat in the House in last September’s special election against Dan McCready. Bishop didn’t have a challenger this time. 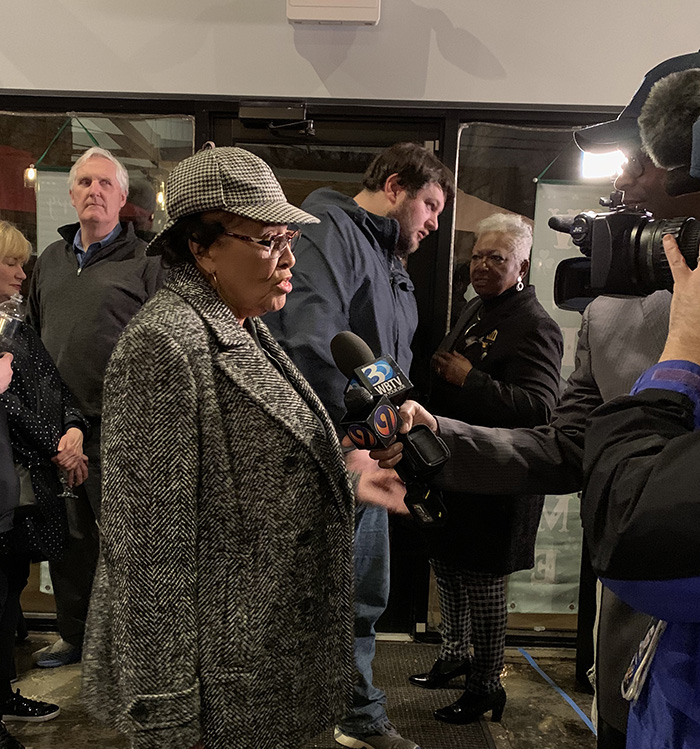 Congresswoman Alma Adams had lots of reasons to be happy on Tuesday night.

Most observers believed the Republican gubernatorial primary would be close. Or at least closer than this. But lieutenant governor Dan Forest won in a wash, with nearly 89 percent of the vote against Holly Grange.

This sets up an intriguing governor’s race that’ll probably draw national attention this fall, as Forest, a staunch conservative and the son of former Charlotte mayor Sue Myrick, tries to unseat Democrat Roy Cooper. The incumbent cruised in his primary Tuesday, picking up 1.1 million votes to 164,000 or so for his opponent, Earnest Reeves.

Candidates must top 30 percent to avoid a runoff. Mark Robinson did that in the Republican primary. But Raleigh’s Yvonne Lewis Holley, who finished first in the Democratic primary with 27 percent, may face a runoff from second-place finisher Terry Van Duyn. Van Duyn told the Asheville Citizen-Times Tuesday night that she’d decide whether to push for the runoff soon.

In a normal year, this wouldn’t be a high-profile race. But in February, WBTV aired a story saying that judge Aretha Blake had a backlog of cases for which she hadn’t entered orders, leaving some families in limbo. Blake disputed the story and rallied support. She filed a restraining order against the station, which another judge denied.

On Tuesday, voters stuck with Blake. She pulled 69 percent of the vote to 31 for her opponent, Lynna Moen.

Also in a judicial race: Casey Viser picked up the Republican nomination for N.C. Superior Court District 26A, Seat 01.

The race for the “most important job that no one has ever heard of” was by far the closest and most exciting of the night. Duke professor Ronnie Chatterji slipped away with a narrow victory, defeating Dimple Ajmera and Matt Leatherman — 36 percent to 34 percent to 30 percent.

Ajmera, a Charlotte city council member, got a big bump from Mecklenburg County, where she had 59 percent.

Chatterji will face incumbent Dale Folwell, a CPA and former speaker pro tempore in the N.C. House, in the general. The treasurer oversees the state’s $100 billion pension fund.

Jenna Wadsworth, a 31-year-old N.C. State graduate, advanced to the general, where she’ll face longstanding incumbent Steve Troxler. Troxler is a bit of a celebrity in rural areas, but he’s faced some criticism from Democrats for not moving fast enough on climate change efforts. It’ll almost certainly be a top issue in the general election. 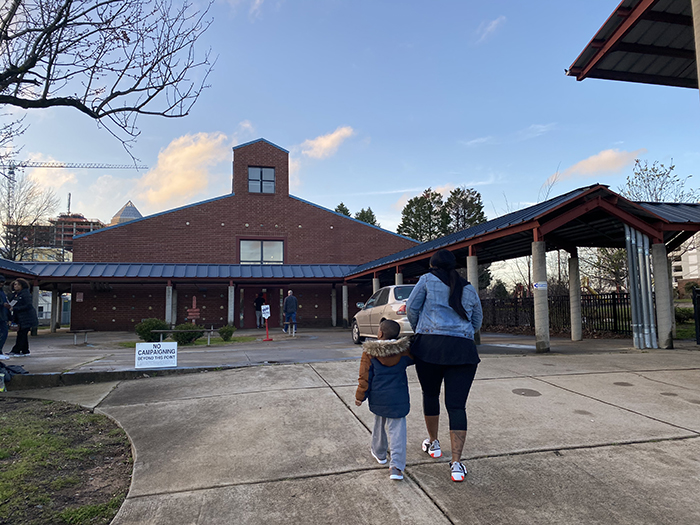 On Tuesday evening, First Ward Creative Arts Academy in Uptown had a full parking lot and a steady stream of voters.

N.C. Superintendent of Public Instruction: Republican Catherine Truitt and Democrat Jen Mangrum each won by convincing margins and will face each other to fill Mark Johnson’s seat.

N.C. Commissioner of Insurance: Mike Causey, who’s gained a reputation for being tough on fraud and foiling a conspiracy that involved leaders of his own party, ran into little trouble in the Republican primary.

N.C. Commissioner of Labor: Josh Dobson led with more than 40 percent of the vote in the Republican primary.

N.C. Secretary of State: Republican E.C. Sykes, of Durham, advanced from the Republican primary and will face incumbent Elaine Marshall.

N.C. House District 102 (covers Plaza Midwood, Belmont, Druid Hills areas): Incumbent Democrat Becky Carney had more than twice as many votes as any of her opponents.

Whew. That’s a lot. See you in November.

Katie Peralta and Emma Way contributed to this report.