An addict’s journey to recovery through the Community Matters Café 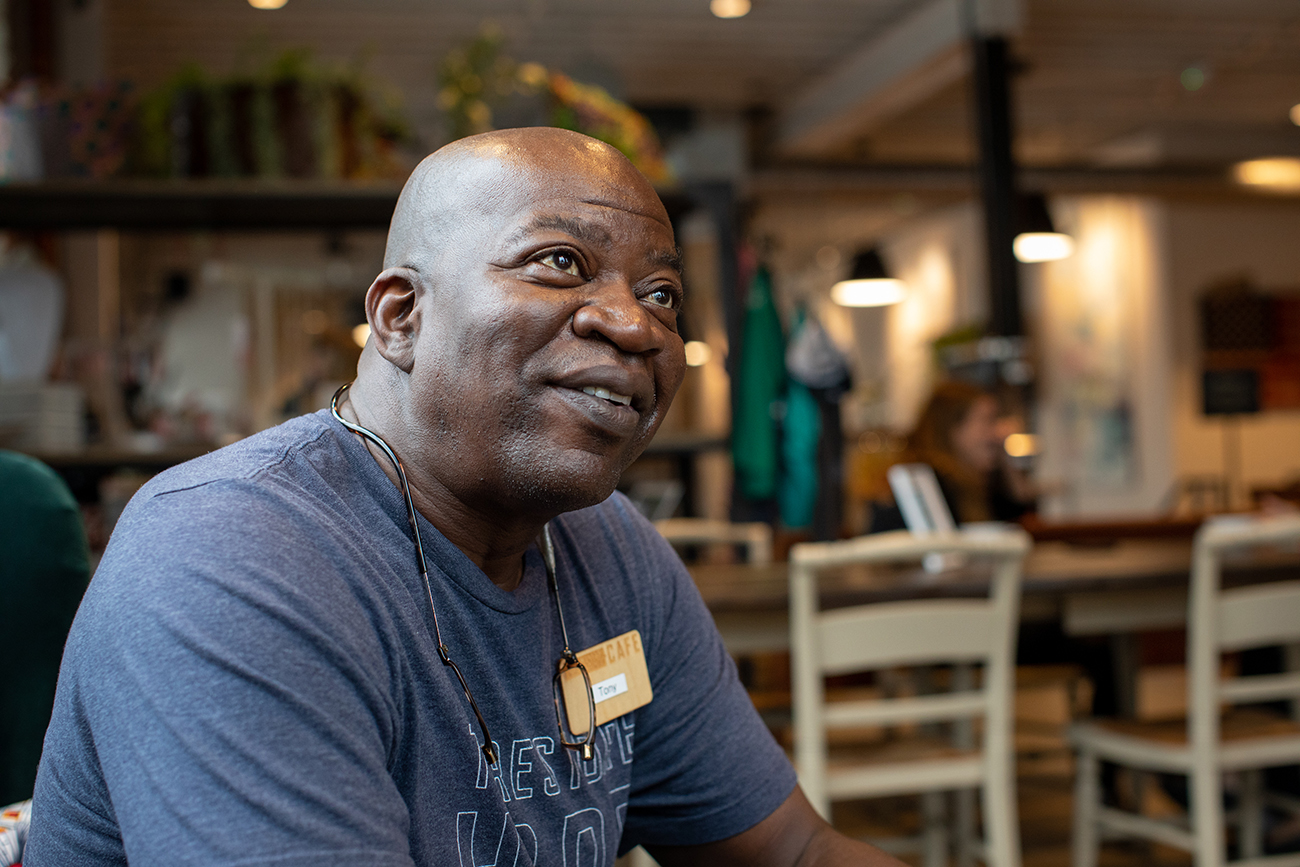 Story by Jen McGivney and photos by Logan Cyrus | November 20, 2019

Here’s what you can tell about Tony Barnett when you see him working at Community Matters Café. He has a soft, deep voice, and an expression that settles into kindness. As he keeps pace with the pre-work rush, he calmly takes a moment to look each person in the eye, pause, smile, and wish them a good morning.

Here’s what you can’t tell. Tony used to be homeless, sleeping behind abandoned houses in Gastonia. His alcoholism cost him everything he valued — relationships with his wife and children, his job in a textile mill, and a house with flowers in the front yard, and two Chows, Houdini and Lady, barking in the back. He traveled a long way — in spirit if not geography — to stand behind the counter at Community Matters Café, smiling and wishing everyone a good morning.

This café, which opened in Third Ward in April 2019, is one of three campuses of the Charlotte Rescue Mission. Every student working at the café has come from the other campuses: Rebound and Dove’s Nest, addiction recovery programs for men and women. Most of these students have lost jobs, homes, and addictions. Now they’re here, gaining skills to prepare for new chapters.

Tony’s in the final stretch of a nine-month journey through addiction recovery. Today, he’ll graduate from the café – clean, prepared, ready to rebuild a life. 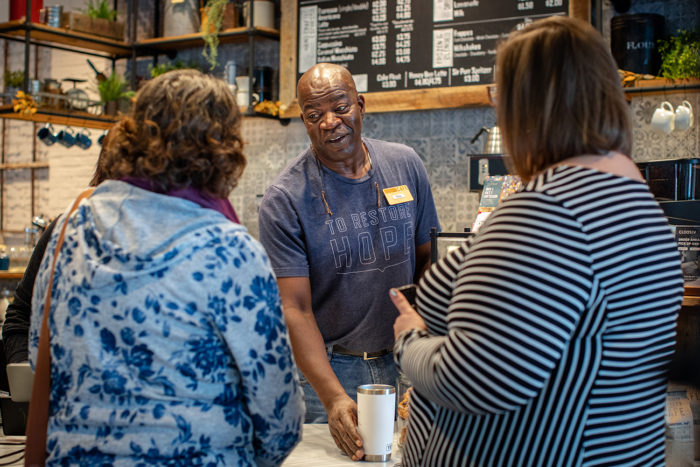 We have countless casual interactions each day. With baristas, cashiers, servers, colleagues. If we even look up, we rarely pause long enough to wonder about the stories and struggles behind the face. What happened to that person this morning? Last year? As a child? Our interactions veer more transactional than personal.

But at Community Matters Café, a server comes to wipe down a communal table, and a man nearby removes his earbuds to thank him. A barista steps beyond the counter to clear a woman’s plate, and she looks up from her tablet to ask about his day. And then, she listens. These moments feel like minor miracles in a culture that prizes efficiency and where most of the people around us remain nameless. Even faceless.

Things work differently here. Customers know that each student has a story of addiction and recovery, and they don’t come in spite of these stories. They come because of them.

It’s humbling to eat here. The people who serve the food, who help prepare the food, and who wipe the tables have fought and achieved far more than most people ever will. These people are saving their own lives. The customers know that.

Hence the thank-you’s. Hence the how-are-you’s.

This place reminds us that there’s a story and struggle behind every face. By the time these students begin their work at the café, they’ve successfully completed 120-day residential drug and alcohol addiction recovery programs. The Christian-based programs promote sobriety, personal healing, and new beginnings.

“Are you born an addict or alcoholic? Absolutely not. Can you leave that lifestyle? Absolutely, you can. The concept of second chances is important here,” says Ed Price, the café’s director. “We’re here to show them that we love relentlessly and regardless of their pasts.” 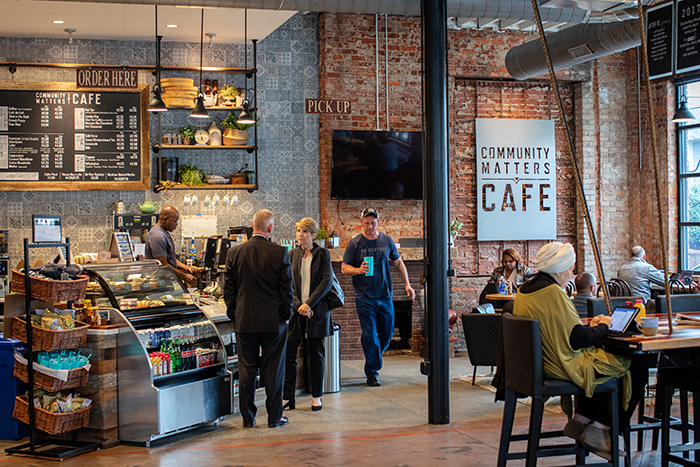 The recovery programs at Rebound and Dove’s Nest are voluntary. People aren’t sent by a court; they can’t be steered by parents. They’re adults who come willingly, already clean, and ready to start anew. The programs incorporate Alcoholics Anonymous and Narcotics Anonymous — residents must attend meetings four times a week. After completing the program, some graduates move onto CPCC, culinary school, or barber school to prepare for work. Some find jobs directly. Some come to Community Matters Café.

Ed mentions that too many people buy into the image of addiction found in movies, of someone camping under a bridge with a needle in an arm.

Price offers examples of people who have gone through the program. A 19-year-old DARE kid from an influential family never touched drugs until the prescription pain pills he took after his appendicitis. He spent the next seven years in and out of rehab for opioid addiction. A woman in her fifties, devastated by the early death of her husband, had a friend offer her something to ease her pain: crack cocaine. Desperate to feel better, she tried it. Instead of easing her pain, it sparked a ten-year addiction.

Students who choose to work at the café receive four months of training in all parts of the restaurant: serving, making salads, doing chef prep, washing dishes, working the coffee bar. As they do, they re-enter the rhythm of work, getting used to a set schedule and slate of responsibilities.

They deal with the public, with colleagues, with stress. They gain skills in the hospitality industry, which employs about 150,000 Charlotte workers. And all the while, they gain resilience.

“We want them to fail and to fail as quickly as possible here,” Ed says. “You work here, and you’re going to drop something, you’re going to get ticked off at something. That’s fine. That’s just part of life. But here, you do so without covering those feelings of anger and disappointment with drugs.”

Each month, a new cohort of four to eleven students begins the café’s program. Twenty-four students have graduated so far, moving on to jobs at places like Ruth’s Chris Steakhouse, Amelie’s, 131 Main, Smoothie King, and The Waterman. The job placement rate remains 100 percent. 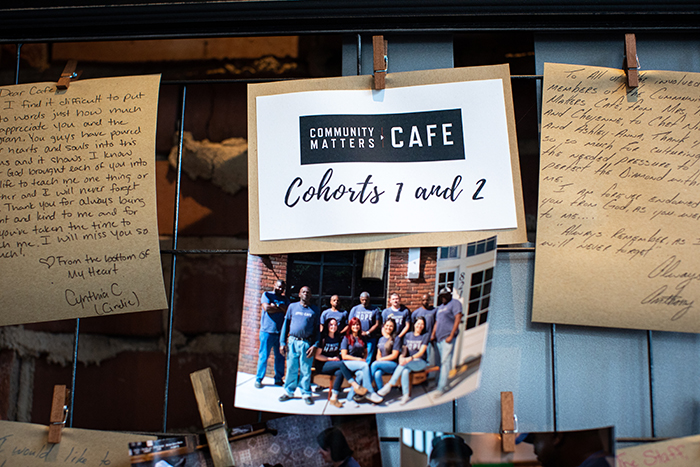 Students enter the program in cohorts. In the café’s first seven months, 24 people have graduated — with 25 and 26 set to complete the program this week.

Tony arrived to Rebound in an Uber.

It was February, and he’d spent the previous 10 days at CaroMont Regional Medical Center in Gastonia, where doctors sent him to the psychiatric ward after he had alcohol-induced hallucinations on the first night. He told doctors that someone was after him, but he doesn’t remember that. What he remembers is the feeling he had on his fifth day when clarity began to replace the alcohol in his body. “I asked God to help me,” he says. Counselors suggested Rebound. He listened.

In Rebound, he learned about the science of addiction, about the impact on brain chemicals that lingers years after using. He learned that alcoholism and drug addiction are diseases of the mind and the body, and both need to be part of his recovery. “I used to drink for the effect. I’m not a social drinker, never was and never will be. Now I understand that someone can drink half a beer and leave the rest on the table. That doesn’t make any sense to me,” he says. “My enzymes process alcohol differently.”

Tony also learned how to forgive himself and others.

“My sponsor told me not to use the word (sorry) because he says I’m not a sorry individual. He says that if I do something wrong today, to say ‘I apologize,’” Tony says. “I’m not perfect. So I apologize for screwing up. But I’m not sorry. I’m worth something.”

Tony decided not to continue in the restaurant industry; instead, he’s seeking work in a warehouse. As he prepares to say good-bye to this job, he anticipates his next one, submitting job applications and attending job fairs. He also reflects on his growth since the Uber dropped him off at Rebound.

“I went from not wanting to live, feeling hopeless, like … ‘I’m an old guy now, why keep trying? Just give up and throw in the towel.’ I went from that to, ‘I want to live,’” Tony says. “I don’t have no Lexus to drive, I ride the bus. I don’t have no mansion to live in, I live in Hope Haven. But I’m grateful for life itself. It’s not about material things, it’s about the peace that I have that I don’t want to let go of.” 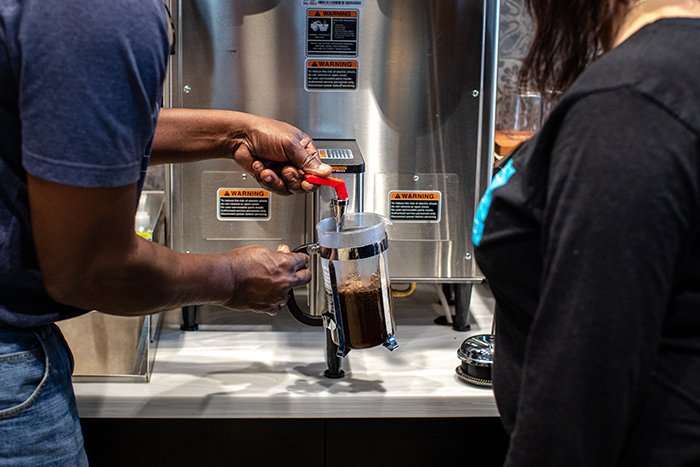 The mission, which is behind the café, has operated in this spot for 81 years, a couple blocks from where tens of thousands of Charlotteans tailgate on fall Sundays. Yet it’s unknown by many. Like the problem of addiction, mainstream Charlotte’s proximity to the rescue mission doesn’t equal its awareness of it.

This café has become a physical bridge between the public and the rescue mission, as well as a gentle introduction to the problem of addiction.

“It’s changed my perceptions a lot,” says Jenny Villapando, the café’s manager. “I had preconceived notions (about addiction). But getting in here and actually talking to (the students), guiding them — and sometimes they’re the ones guiding me — it has transformed what I think of people, not just here but everywhere. Now I stop and think, ‘I wonder what that person is going through.’” 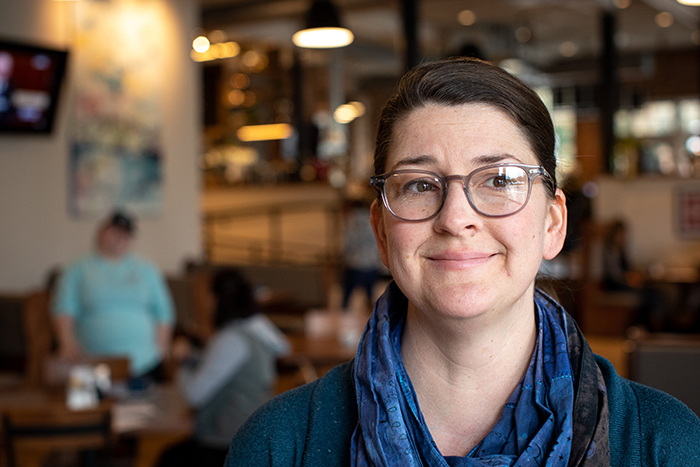 Jenny Villapando is the manager of the Community Matters Café.

Tim Miner’s office at Charlotte Is Creative is close to the café, and he works here about four times a week. He comes for several reasons: its proximity, its killer bánh mi sandwich, its feeling of joy.

The more Tim showed up, the more staff and students he met, the more questions he asked about the rescue mission. That encouraged him to learn more about addiction in Charlotte and how he can help.

Now, Charlotte Is Creative considers itself to be an unofficial ambassador for this place, hosting meetings here, introducing new faces, and publicizing it in articles.

Attention follows what’s new, and in Charlotte, there’s always a new non-profit, restaurant, or business to promote. The café offers a unique spin: a new place shining light on an old mission. “It’s nice to see something like this disrupt that flow and make people notice and ask questions,” Tim says.

Susan Brazzell is another regular. She comes three mornings a week, sitting at the corner of the communal table as she manages her online resale business. She and Tony have become friends, bonding over their shared love of art. She grows close to each cohort of students, and she attends each graduation.

“There are places you go that have a spirit to them, you know, and I believe that you have to surround yourself with people and places that bring you joy,” Susan says. “There’s a higher power (at Community Matters Café). This is not a typical place to sip coffee and eat food. It’s much more than that.” 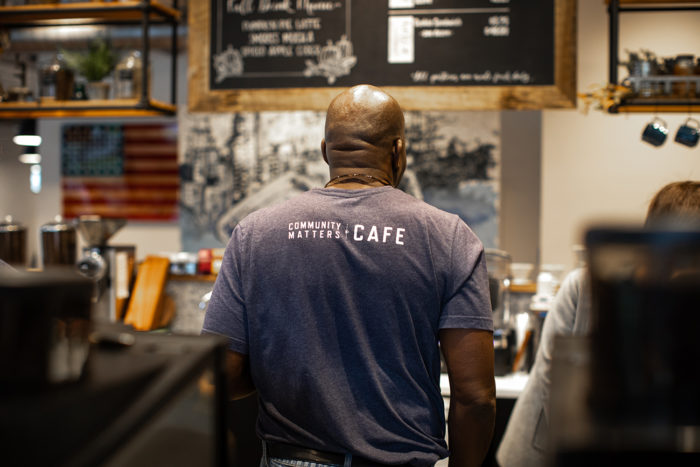 During construction in 2018, the back wall of the café was nothing but concrete.

Ed kept boxes of markers nearby, and he asked anyone who came in — volunteers, contractors, donors, students — to write something on the wall. A prayer. A blessing. An intention. A scripture. Hundreds of people covered the wall with words.

As construction progressed toward its final stages, contractors installed tile and sheet rock over that back wall. Within it, however, are hidden messages of hope and transformation. Like with the faces we see, this wall has hundreds of stories hidden beneath. Ed wrote a prayer on the wall: “God do your work, and don’t let us get in the way.”

More than a year later, on a late Friday morning in November, the morning crowd yields to the lunch rush. Tables begin to fill around the restaurant. Tony keeps up with a steady flow of drink and pastry orders at the coffee bar, just days away from his graduation.

Ed looks at the scene that surrounds him. He’s asked: Was his prayer answered?

Jen Tota McGivney is a writer in Charlotte. Reach her at [email protected] or on Twitter, @jen_mcgivney. 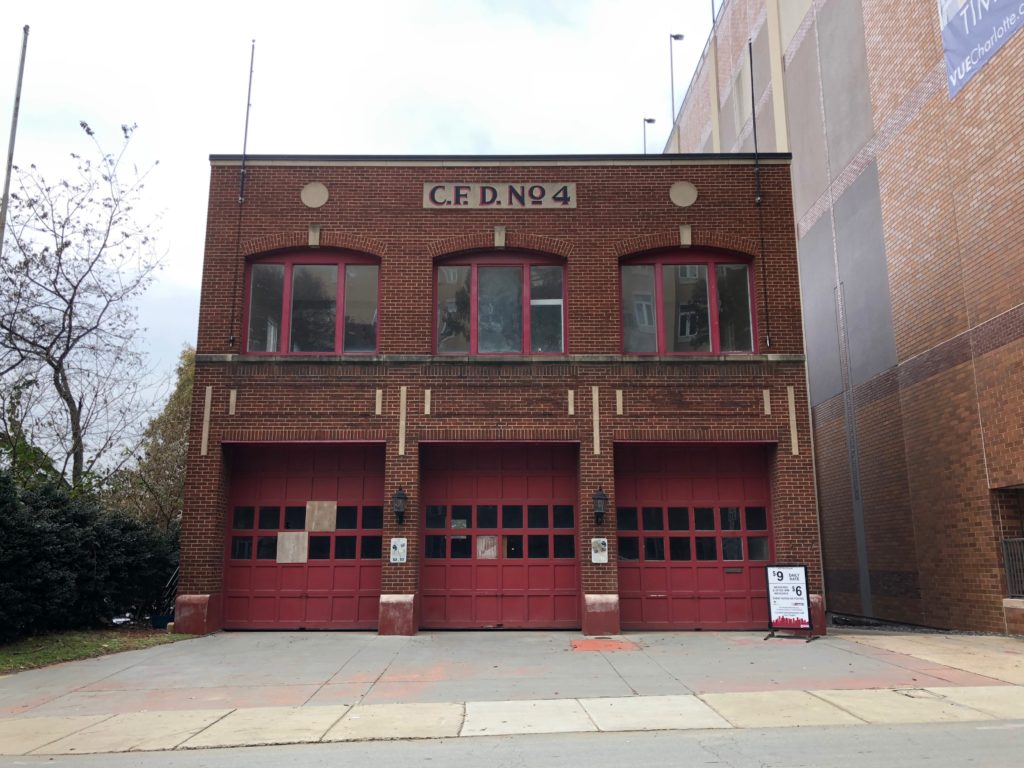