Blind Date: 29-year-old sales manager and 25-year-old consultant dine at The Stanley, then swap numbers and a kiss 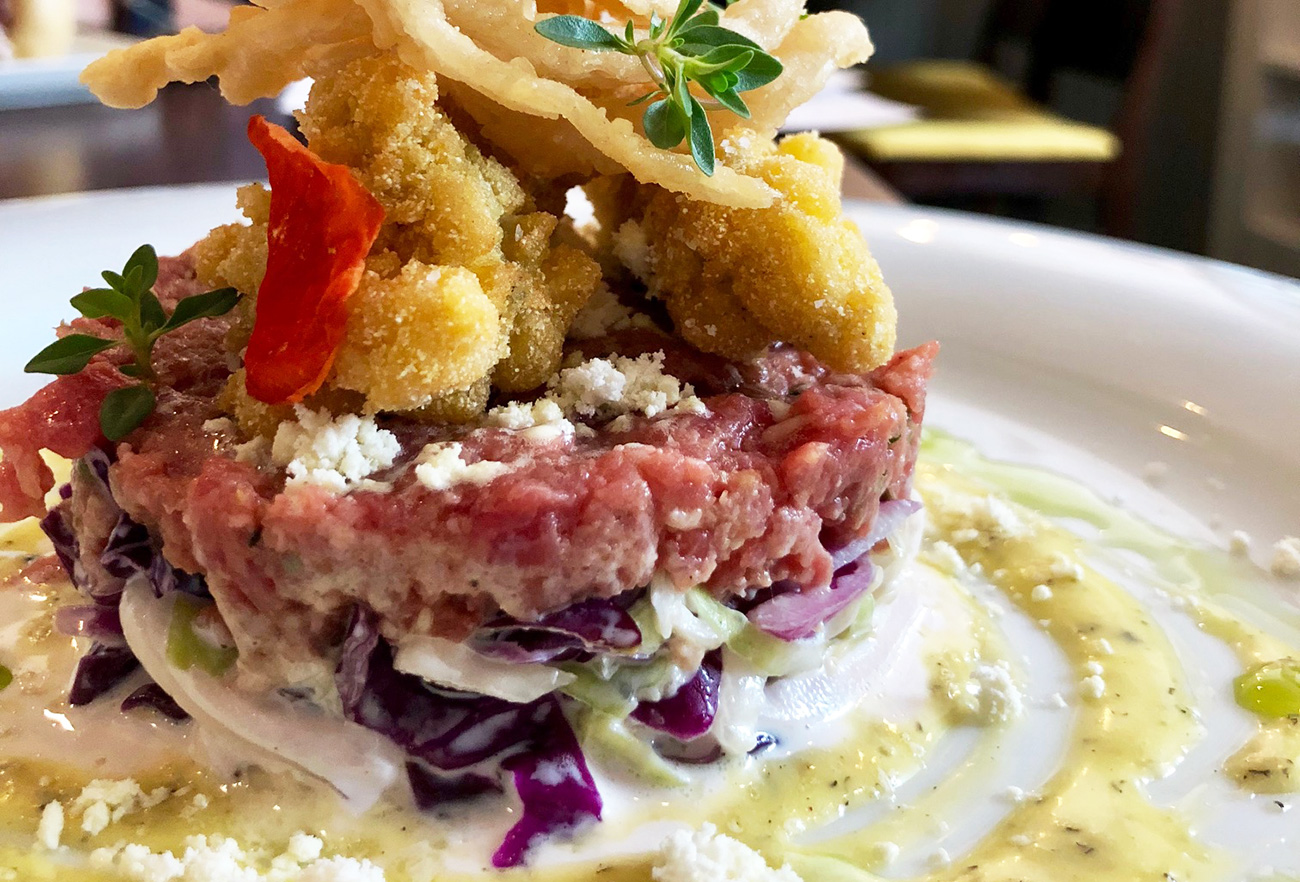 How does Blind Date work: Charlotteans fill out this Agenda Blind Date Survey about their make-or-breaks, their ideal types and their perfect dates. Then the Agenda plays matchmaker by sending couples out on blind dates. Below are the results. To see past installments of the series, click here. Want the chance to get matched? Fill out the survey!

Responses have been edited lightly for length and clarity.

Kyle recently moved to Charlotte from Chicago. He loves that Charlotte is a large city with a small city feel, and his best friend would describe him as “funny, caring, and reliable.” Though he’s new in town, so far his favorite activities include going to breweries and Hornets games.

Then we’ve got Katie. She’s a consultant who grew up here, perfect for playing tour guide for Kyle. Her best friend would describe her as “kind-hearted, thoughtful, and always down for an adventure, no matter how big or small.” Her favorite Queen City activities include brewery hopping and anything outdoors.

Kyle ended his Blind Date application by saying, “I’m new, send help” and so we did. We paired these two up and sent them to enjoy a meal at The Stanley. Here’s how it went.

Kyle: The majority of the women I’ve met here so far have been on dating apps. As far as the dating scene here, I mean, it’s all basically kind of the same as what I’m used to. It seems like a lot of the girls are transplants from other places, so it’s kind of a hodgepodge of different people from different places.

Katie: I typically meet my dates on dating apps or at breweries, I just strike up a conversation with someone if I’m out and about.

How did you feel leading up to your date?

Kyle: I was very excited for it. It’s not something that comes across often, a true blind date.

I can honestly say I’ve never been on one like that, because, anytime you meet someone, even if it’s on a dating app, you get to do your own screening of the individual.

But I was excited for it. I’m not really the nervous type of person. I was more so eager and anxious for it to all happen.

Katie: I was so nervous. I don’t go on a ton of dates. I just recently started to put myself back out there.

But yeah, I was nervous. But knowing that you had already talked to him, that kind of eased my nerves.

Kyle: She’s an attractive girl. I liked how even though she later told me that she was  nervous, she came and approached me and acted like she had a whole bunch of confidence and was very excited to meet me. I was very attracted to that.

Katie: He was very quiet. He seemed pretty shy. And I think that’s just easy for me to spot, because I feel like I’m a loud, outgoing person. He was very cute. He had a really nice smile, and he was really nice to talk to.

Kyle: It was a lot of fun. We went to The Stanley and had a good time.

Sometimes when you meet someone for the first time, especially a situation like this where it’s a complete blind date, you don’t know the person at all and there can be some awkward pauses or times when things aren’t flowing as well.

We were always talking, having a good time and, yeah, overall was it was very good. I’m happy with how things went.

Afterward, we went to Barcelona, since that’s close to where we both live. Then I walked her home and walked on from there.

Katie: It was a really good date.

Our food was good and we talked pretty much the whole entire time. Like, there was never really any awkward silences. I was nervous leading up to it, but then once I got there I was totally fine. He didn’t make me feel nervous at all.

I yawned a few times, and he was like, “Oh, I need to make sure I tell Lauren that I’m super boring and that you’re yawning.” And I was like, “I’m so sorry. It’s not you!”

I would say it’s not the best first date that I’ve ever been on, but it was a lot better than I feel like it could have been considering that it was completely blind. I went in with no expectations and was pleasantly surprised. He was he was really and very easy to talk to. 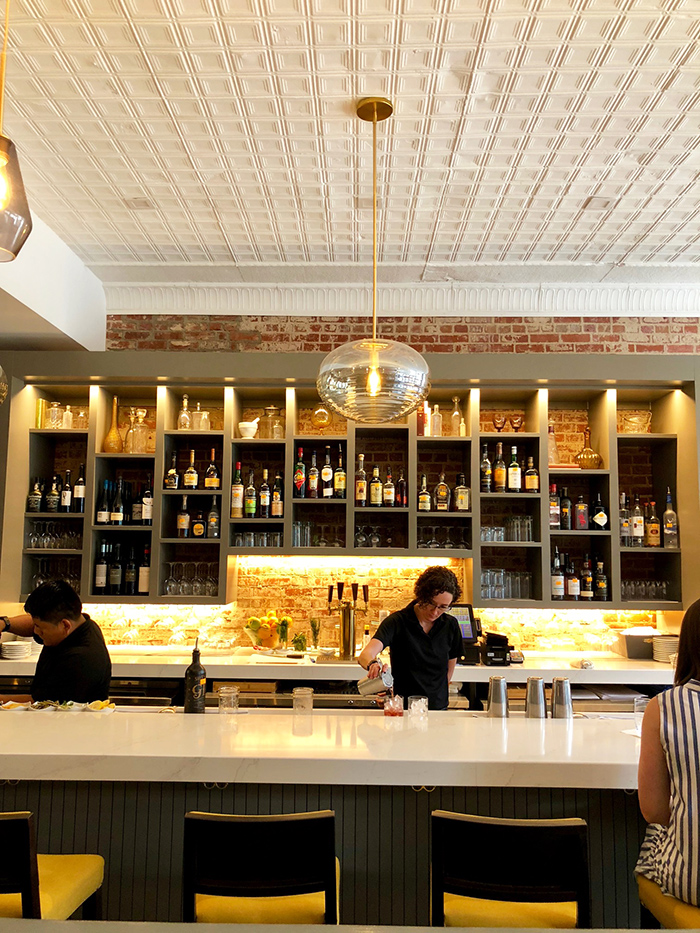 On a scale of 1-10, how would you rate your date’s personality?

Kyle: I don’t know what a 10 would be. But I’d say somewhere between like an eight and nine. I felt that we vibed well together. So I would say somewhere around there.

Katie: He had a really great personality, but he was shy. I’d say a six or a seven.

Kyle: I would say a nine.

Katie: That’s hard. I would say a six or a seven.

Kyle: I would say an eight or a nine again.

Katie: I would probably say a five or six. We did kiss at the end. I would definitely like to see him again, just because I think that he would really come out of his shell more.

Kyle: I’d say an eight or a nine again.

Katie: It was a really great date; I’d give it an eight.

After we left The Stanley, we went to Barcelona because we both live in South End. We live like three apartment complexes down from each other.

So will there be a second date?

Kyle: Yeah, I would say so — I was surprised with how well it went.

She was gone over the weekend for a bachelorette party, so I didn’t really bug her all that much, but we plan on meeting up again soon.

Believe it or not, we started following each other on Instagram before I even got her phone number. When I left her at her place I got her number as well.

Katie: Yes, I’d like to go on a second date. I think he’d come out his shell a little more — he mentioned that a few times that he was shy.

I had a lot of fun, and he definitely came prepared with things to talk about, which I can appreciate.