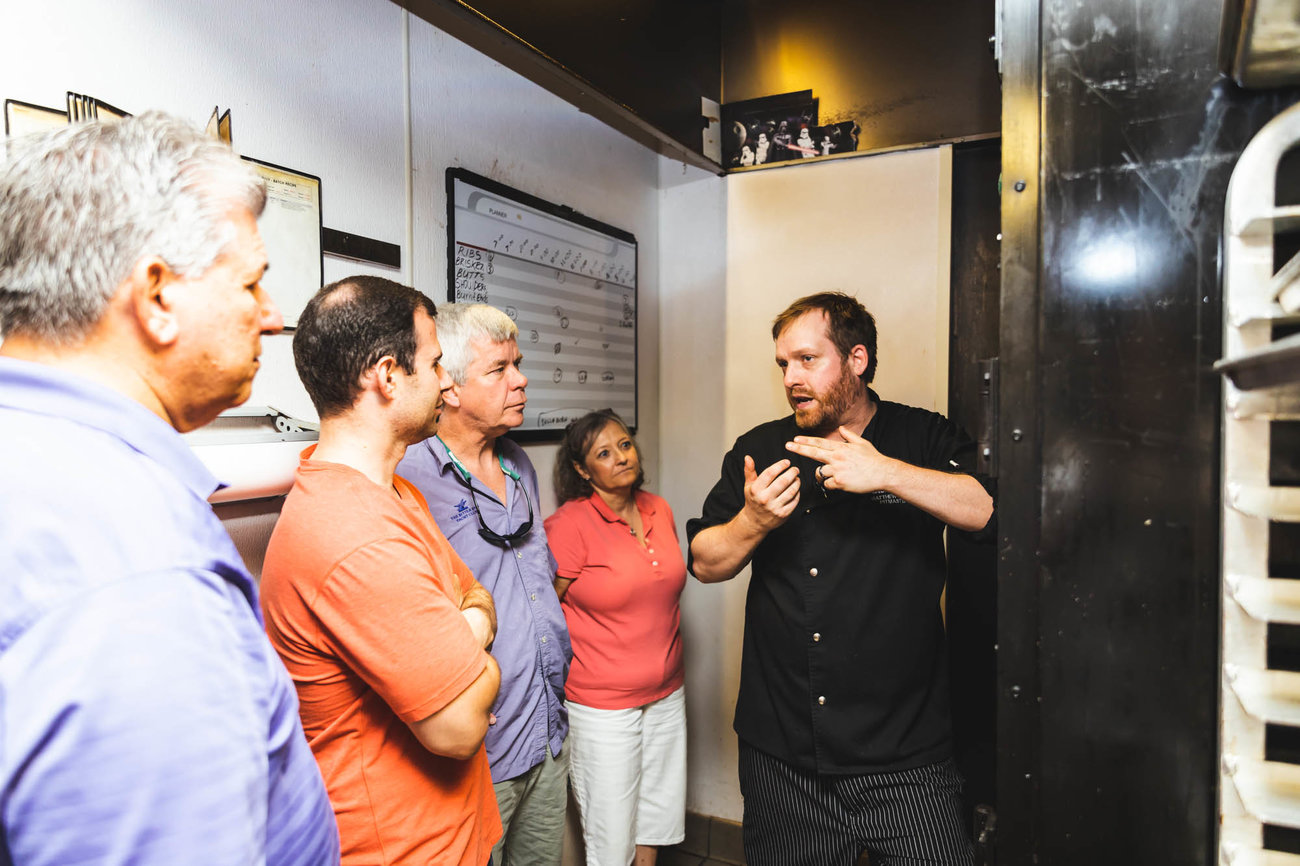 This content was created in partnership with Midwood Smokehouse.

Matt Barry is the Executive Pitmaster for Midwood Smokehouse. He’s been working in BBQ for the past 15 years.

Matt discovered his love for smoking meats at college tailgates at NC State. He joined the Midwood Smokehouse team over 8 years ago and now he oversees their five Charlotte-area locations.

About the header photo: Matt takes guests on regular pit tours at all the restaurants to show them the wood fires and behind the scenes processes.

(1) Office location?
I wouldn’t say I have an office. Anywhere we have a BBQ pit. That’s my office. It varies day to day, week to week since we have five locations.

(2) What do you actually do? Walk us through a day in the life.
Basically, I oversee all of the food and production schedule of it. Where ever I go, the first thing I do is check the smoker. I also talk to the chefs and help them out. Other than that, I’m developing new recipes, new specials and managing the chefs. Myself and Michael Wagner are the only two pitmasters.

Growing up near Lexington, pulling and chopping pork is second nature for Matt.

(4) Sleep routine?
Unpredictable. Not routine-oriented. I have a two-year-old daughter so that affects it too. On my days off, I go to bed at 8 or 9 p.m.

(5) Do you listen to music while you work?
I do but I usually let the guys pick it out at whatever kitchen I’m working in that day. It’s good for morale. We listen to it in the mornings before customers come in. I personally really like indie rock or alternative rock music. Ween is my favorite band ever. I like Phish too. I’ve been to 80 Phish concerts.

(6) Morning commute?
It’s pretty easy. There’s not a lot of traffic at 5 a.m. I usually listen to sports talk radio or NPR low in the background.

(7) How do you spend the first hour of your day, starting from when you wake up?
I usually get out of the house pretty quick, let the dogs out, get dressed. I don’t really eat breakfast ever. I live out in Union County so that half hour I spend in the car is like my wake up time. I wouldn’t say I’m grumpy in the mornings but it takes me awhile to get going. I do not drink coffee, but I do drink diet coke.

(8) What did you eat for breakfast this morning?
I rarely eat breakfast right now. It kind of comes and goes in phases. Occasionally I’ll grab an apple or something.

(10) What are some other gadgets or apps you can’t live without?
My instant-read thermometer. It gives you an instantaneous temperature on meat. I love it. I feel naked without it. Besides that, my pocket knife.

The longer answer is – I get to do something I love to do. This used to be something I did on the side in college at tailgates and I never thought I could do this as my job and support my family doing it. I think even if I wasn’t doing this as my job, I’d still do it for free. 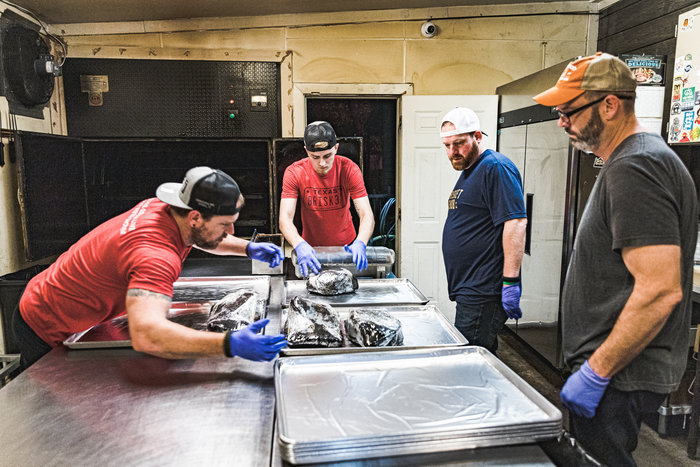 Matt Barry and Michael Wagner on a recent trip to Texas to cook with some of the country’s highest lauded pit masters, like Will Buckman of Corkscrew BBQ in Houston.

(12) Midwood has attracted some big name guests. Have you met any of them? If so, who was your favorite?
The big ones always come in on my days off! But I have met some of them. I’ve met a couple Panthers players. My favorite, though, was Philip Rosenthal the creator of Everybody Loves Raymond. I got to sit and eat dinner with him one night. He was funny and really charismatic. That’s the one that sticks out in my mind.

(13) Where do you go around Charlotte to get a break from work?
Generally, I just like to go home. I have a pregnant wife and a daughter and that’s just the way life is now. 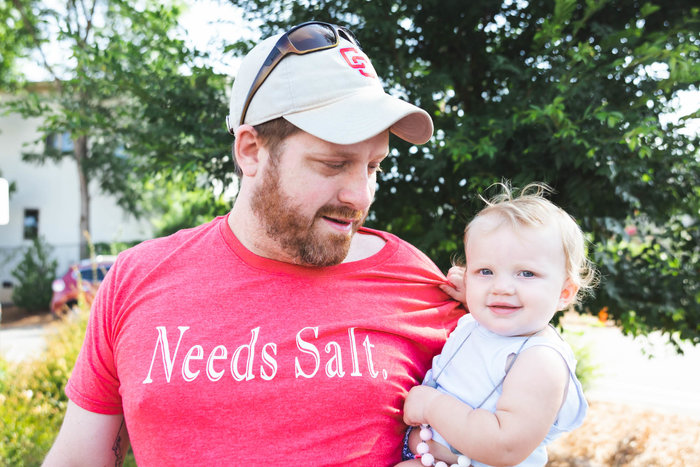 Matt and his daughter Ava, already a brisket snob at age 2.

(14) What’s your favorite side project?
My garden. I’ve got several different large boxes in the backyard. In the summer, I’ll grow sweet potatoes, squash, zucchini and then I’ll transition into a winter garden. It’s my stress reliever. I used to go to the bar after work but now I like to come home and go out and work in the garden.

Plus, the food that comes out of your garden tastes better than any produce you buy at the grocery store. When my daughter was younger we’d actually make her baby food out of stuff from the garden.

(15) If you weren’t doing your current job, what would you be doing?
Fishing.

(16) How did you know you wanted to become a pitmaster?
It’s weird it just kind of happened. I met Frank and I realized there was a demand for someone with my skill set. I have a history degree from NC State. I had no idea what I was going to do. You can’t do a lot with a history degree. Some people said I should go to grad school or law school but I didn’t want to do either of those things. I was at a crossroads and that’s about the time I realized the barbecue knowledge and skill set I had was something I could use.

(17) What’s a purchase of less than $100 that you’ve made that’s most improved your work output or life?
My YETI cup. My wife bought it for me. If I leave it at home when I go to work, I’m lost for the day. I just drink water out of it but it keeps it nice and crisp. I never thought a cup would make that big of a difference.

(18) Other than the Agenda, what media brands do you consume?
I like to read the actual newspaper. Also, I’m kind of a history nerd so I like to read history books. And it’s got to be print. I won’t read on a Kindle or anything. I need to turn the actual pages. 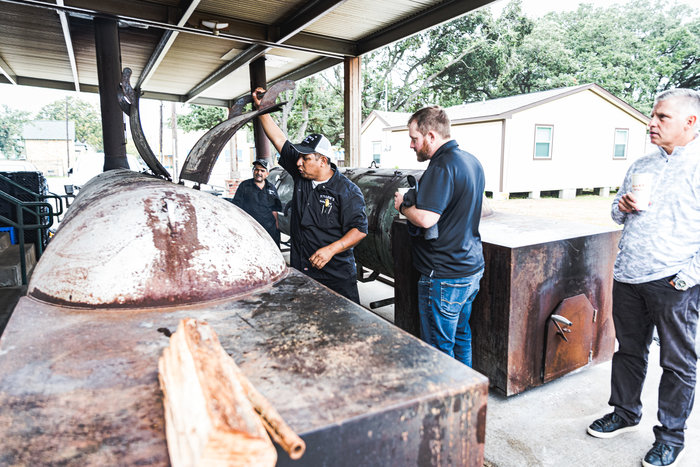 Matt Barry and Frank Scibelli checking out the pits at Killen’s Barbecue on a research trip.

(19) Advice to your 25-year-old self?
Calm down. I was a little hot-headed and quick to react. I’d get worked up. I’m a lot calmer and even-tempered than I used to be.

(20) Last book you’ve read (grade it on a A-F scale).
In Harms Way. It’s the story of the U.S.S. Indianapolis battleship. I was listening to a podcast about it and that’s what made me want to read it. I’d give it a B+. It was pretty interesting.

(21) What’s one thing people don’t know about Charlotte that they should?
I was born in Charlotte. I think with all the growth in the past 5-10 years, people don’t realize Charlotte used to have a smaller town feel. I also think that Charlotte BBQ is kind of underrated. I don’t think people give Charlotte the credit it deserves when it comes to BBQ in North Carolina.

And the only other thing I’ll add, and some people won’t believe me, is that the traffic didn’t used to be this bad.

(This content was created in partnership with Midwood Smokehouse.) 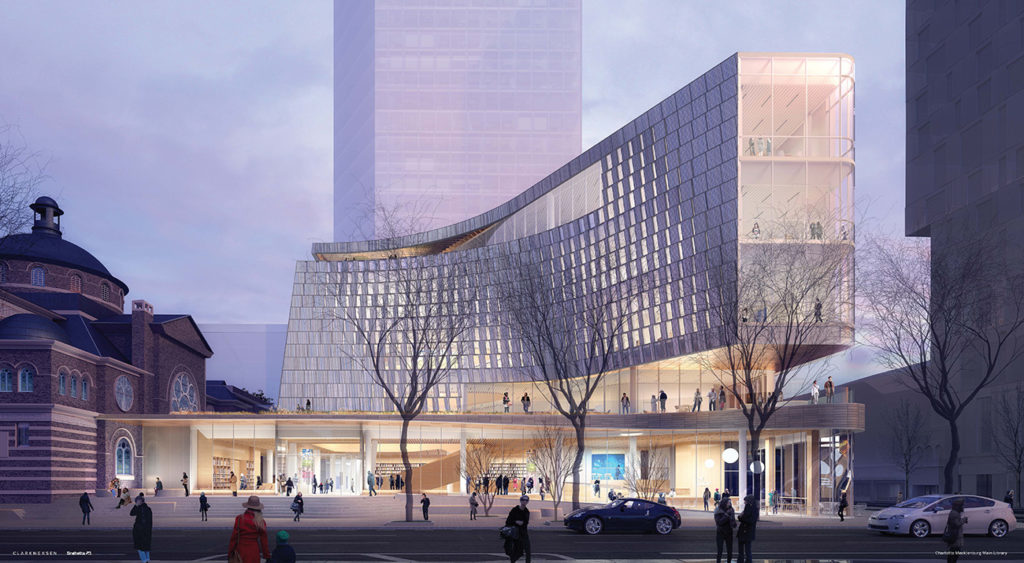 ‘The part of progress that has a downside’: What two years of library construction will mean for Charlotte